The European Hotel Managers Association’s 46th annual general meeting was held in Paris on 15–17 February. Hotel Management International was in attendance as members elected a new president and discussed the importance of creating, rather than reacting to, changes that could transform their industry.

Rome 1973. Five of the city’s top general managers begin meeting at the Hotel Ambasciatori to discuss what their role might be in helping to promote the free movement of people, goods, cultures and ideas being driven by the gathering momentum of the European Project.

If a number of decisions are to be taken at an international level, how does one guarantee a voice in proceedings? Furthermore, if we really are witnessing an increasingly laissez-faire attitude towards borders and sovereignty, might it not be an idea to explore the possibility of collaboration with our brethren across Europe.

So, the following year, representatives from some of the continent’s grandest hotels gathered at the Ambasciatori for the first general meeting of the European Hotel Managers Association (EHMA). But questions were raised regarding the pan- European nature of the group; among its first 40 members, only ten were non-Italians.

Much had changed by the time of the association’s 40th birthday celebrations, by which point EHMA accounted for 425 members from 25 European countries, representing 350 hotels, 90,000 rooms, 70,000 employees and an annual turnover of some €6 billion.

But it was an Italian who was charged with helping lead those celebrations back in 2013: Ezio Indiani, general manager of the host hotel, Milan’s Principe di Savoia. “You have the best general managers in Europe staying at your hotel,” he told us at the time, in a tone of mock horror. “I cannot imagine more intimidating critics. We are working as hard as possible to ensure that it’s perfect. By the time everything is over, I will need a holiday.”

Fast forward six years and we are gathered at the Westin Paris – Vendôme for EHMA’s 46th annual general meeting. Clearly a single weekend of being at service to the continent’s top hoteliers was not enough for Indiani, as the genial 66-yearold is unveiled as the hugely popular winner of an election that will see him serve at EHMA president for the next three years.

“Under my presidency I intend to involve all members in order to capitalise on the vast professional and human experience existing in our organisation,” he says. “EHMA must be rich in new initiatives to implement and promote all along the year.”

This will carry on the work undertaken during Hans Koch’s tenure as president, a commitment that is evident across the conference this year, whether it is during private conversations with delegates, one’s phone constantly vibrating to the latest update on the members’ app – EHMA Talk, or an educational programme that celebrates outside ideas, youthful input and ongoing dialogue. “It has been a pleasure and an honour serving you over the last six years,” Koch told the assembled delegates from the stage. “I look forward to sitting down there with all of you from next year.”

Next year and beyond were already topics of conversation on the first day, as, in an unprecedented move, the host cities for 2020, 2021 and 2022 were announced – Lugano, Hamburg and Warsaw.

Back to the present and an official welcome was delivered by Jean-François Martins, vice-mayor of Paris with responsibility for tourism and sport. He spoke of the importance of hospitality – and hoteliers – to the city’s economy. “You are all extremely welcome to Paris,” he told the assembled delegates. “We are incredibly excited to have you here in our city.”

Even more excited were the 18 new members being welcomed into the association this year. One of these was Jan Bundgaard, general manager of the Westin Paris – Vendôme, who, one hopes, managed to get some tips from Indiani on serving to the whims of demanding general managers ahead of the event. “We should be everywhere, and if we’re not everywhere, you must tell me,” he told his guests.

Another new member, Danilo Zucchetti of Villa d’Este Hotels, captured what had brought so many people into this industry in the first place. “Can there be any better profession in the world,” he asked, “than making people happy?”

Three very happy new members were Pierre-Henry Perrin of the Renaissance Paris Vendôme, Solveig Herth of the Renaissance Paris Arc de Triomphe, and Zucchetti himself, all of whom won places on a professional development programme at Cornell University. École Hôtelière de Lausanne also offered two online courses as prizes, won by Giuseppe Rossi of the Splendide Royal and Barbara Gibellini of the Villa Principe Leopoldo, both based in Lugano.

The theme of education and self-improvement ran throughout the event, with an added focus on bringing through a new generation of hotel leaders. In conjunction with the general assembly, Ian Millar, of the École Hôtelière de Lausanne, led an education session for the 2019 Young EHMA group, a project dedicated to identifying talented junior employees at EHMA member hotels. They were introduced to EHMA members and then joined delegates for the rest of the conference.

A cocktail party at the The Westin’s glamorous Winter Garden closed proceedings on the first day.

The first speaker on the second day, Ilja Grzeskowitz, personified why this event continues to hold so much value for attendees. The author, motivational speaker and life coach is not the kind of person your typical general manager might have access to – though, having spent 178 nights on the road last year, he described himself as “a professional guest”. Grzeskowitz stressed the need to create change based on innovation, flexibility, and the courage to experiment with new processes and projects to remain at the top, posing his audience a rather unusual question, “Who are the surfer dudes in your life?

“You can’t control the waves, but you can learn how to ride them,” he continued. “That’s what successful change is all about. To adapt to the changing world around, you must actively take action. You need to develop a changemaker mindset.”

Grzeskowitz was followed on stage by three students from INSEAD business school, quite possibly members of Generation Z, whom Grzeskowitz had told the audience would be their “guests, employees and business partners within five years and demonstrate completely different behaviours”. They discussed a survey looking at what young guests look for when booking a hotel, the results of which didn’t suggest quite such a seismic behavioural shift.

“We certainly want that local flavour, a taste of the culture,” one member of the group acknowledged. “But we are spoken about as though we are completely different in terms of how we choose our hotels, and what we look for from them, and that’s not true. The hotel fundamentals still matter.”

Mindset is a subject to which Yves Givel has dedicated a lot of thought. The vice-president for HR at Hyatt International is a great advocate of mindfulness, and talked his audience through a number of breathing exercises and interactive practises. Delegates were encouraged to split into pairs, taking it in turns to speak about themselves for three minutes while the other party was only allowed to listen.

“What did you find easier, speaking or listening,” he later asked the audience, who very much leaned towards the former. “Listening is not so easy. Do you know the average attention span of an executive? Eight seconds.

“There will always be volatility, uncertainty, complexity and ambiguity,” Givel concluded. “We need to learn how to work under those circumstances and organisations need to adapt. As leaders, we have to adopt the sort of mindset required to foster organisational learning every day, and individuals must adopt practises in managing their minds to move forward. It’s about creating clarity and fostering emotional intelligence.”

Another major highlight of the education day was Serge Trigano, former president of Club Med – his father was the founding partner – and the creator of Mama Shelter, the story of which he had come to share with EHMA members.

“The idea was to build something that would break with established codes in neighbourhoods that were not traditionally touristic,” he explained. “When we opened here in Paris in the 20th arrondisement, people thought we were crazy. The economy was bad, there was no tradition of hotels there, but we believed in the concept.

18
Number of GMs to join EHMA at the 46th annual general meeting.
EHMA

Advice from a trailblazer

It was a message that chimed with a theme that ran throughout the conference – it is better to create change than react to it. There are few individuals who personify this value better than Claus Meyer, who, alongside René Redzepi, created an entire culinary culture and manifesto: New Nordic cuisine. The Noma co-founder delivered a barnstorming presentation that not only looked at how he found himself upon that journey, but also how its principles were internationally transferable, exemplified by the efforts of his Melting Pot Foundation and its work in countries such as Bolivia, where the non-profit’s restaurant Gustu, staffed by chefs trained at its culinary school, is now ranked among Latin America’s best.

“By putting certain principles in place, through pushing certain values, you can create a culinary culture where one did not exist previously,” he explained. “It delivers real value and empowerment.”

This year’s event included an interactive platform that allowed audience members to text questions direct from the floor. Did Nordic cuisine have more in common with French cuisine, highlighting technique, or Italian, promoting the quality of produce, Meyer was asked by one delegate. “It is a good question, but I think it really comes down to marrying both,” he replied. “We have wonderful ingredients that we must celebrate, but also incorporating those techniques and culinary lessons that enable us to really elevate the quality.”

This is a lesson that could also be applied to the value of EHMA; taking the best hoteliers in Europe and then heightening that quality through access to lessons from beyond the hotel industry and one another.

The gala dinner that closed proceedings was suitably celebratory. Held in the InterContinental Le Grand’s stunning Salon Opéra, arguably the most famous ballroom in Paris, delegates were treated to traditional Parisienne cabaret from the stage and a delicious menu prepared by chefs Alain Tutournier and Laurent André. Hans Koch, in one of his last acts as president, also revealed the recipients of ‘European Hotel Manager of the Year’ and the ‘EHMA Sustainability Award by Diversey’, won by Patrick Recasens, general manager of the Pullman Timi Ama Sardegna, and Frédéric Darnet, general manager of the Monte-Carlo Bay Hotel & Resort, respectively.

“I am hugely proud and happy to have served you all to the best of my abilities and really try to make EHMA an organisation fit for such a fast-changing industry,” Koch said, having received a parting gift and standing round of applause. “This is a wonderful organisation with wonderful members.” 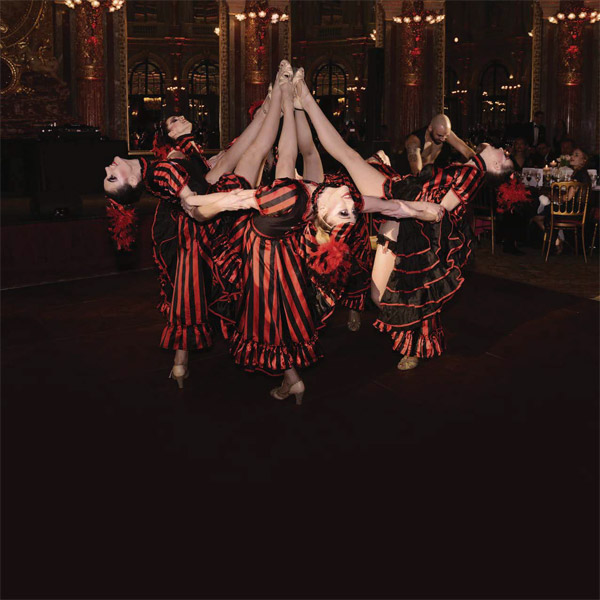 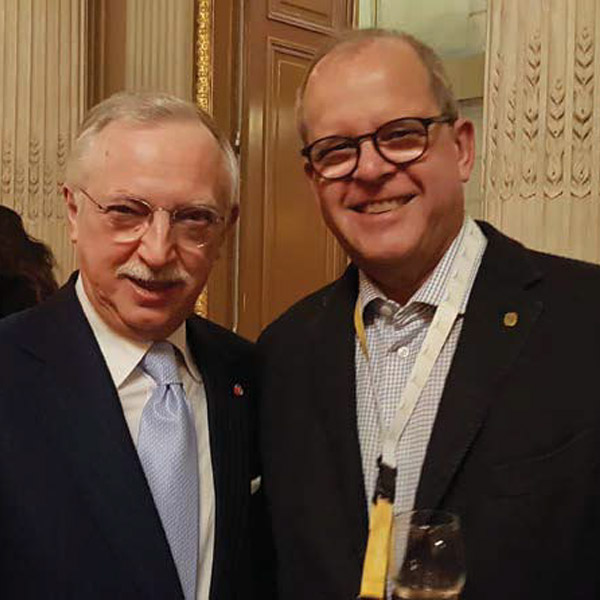 Passing the baton – Ezio Indiani with his predecessor Hans Koch.
Post to: