An imposing complex of baroque buildings situated at the intersection of Leicester Square and Piccadilly Circus; the London Trocadero has been many things. When the building first opened its doors in 1896, it was a restaurant owned by J Lyons and Co, with decadent opera interiors and Arthurian murals that snaked along its grand staircase.

In 2020, London welcomes a ‘first of its kind’ sleep hotel. The Zedwell Hotel brand has been built entirely with sleep and wellness in mind, with rooms specifically designed to limit anxiety and distractions using innovative soundproofing and a gentle circulation of filtered air. With three properties originally scheduled to follow later in the year, what does a sleep-centred hotel look like and why is it necessary? Will Moffitt speaks to Criterion Hospitality CEO Asif Aziz and sleep expert Dr Neil Stanley to find out.

Popular during wartime, as it provided light relief in the form of good food and live entertainment, the restaurant eventually closed in 1965, only to be resurrected 19 years later as a cinema and shopping complex that ran out of steam in the mid-90s.

Similar renovation schemes came and went – Segaworld arcade became Funland arcade until there was no more fun to be had – and the property closed in the early noughties, seemingly doomed as an unoccupied relic to its past glories.

After laying dormant once again, Criterion Hospitality’s owner, Asif Aziz, bought the building for £220 million in 2005, outlining bold plans to reinvigorate this enigmatic property and awaken its seemingly boundless potential.

Aziz and Criterion took their time, however, steadily gauging the market and devising a concept that could bring this sleeping giant back to life – or partly at least. Now, 15 years on, the Trocadero is London’s first sleep-centric hotel, comprising 700 guest rooms, launched as the debut Zedwell, a ‘new hotel lifestyle concept’ specially calibrated for sleep and well-being.

The first of an initial three hotels scheduled for launch under the Zedwell brand, the Trocadero is a bold statement from Criterion and a vision driven by a desire to reclaim the fundamentals of the hotel experience.

“It’s about simple effective design, calming activities to help boost productivity and sleeping habits, along with nutritious food and drink to help people escape from the hustle and bustle of everyday life,” Aziz explains.

A self-proclaimed ‘private sanctuary among the chaos of the city’, Zedwell mirrors the other wellness hotels that describe themselves as self-improvement centres for the soul in their rhetoric. But it is lasering in on this facet of health very specifically and seriously, seeing it as an aspect of daily life that has been somewhat neglected of late.

According to a global survey by WHO, two thirds of adults in developed nations are not getting the recommended eight hours of sleep – a discovery that, according to WHO, is tantamount to a global ‘sleep loss epidemic’.

The subject of sleep

Most hotels that have prioritised the sleep experience – and there have been very few of them – have done so by offering specific workshops on the topic. London’s five-star Corinthia hotel, for instance, offers a sleep package curated by Dr Guy Meadows, head of the London Sleep School. But it is part of the hotel’s wellness scheme, not the focal point, and starts at £758 a night.

Others, like Canyon Ranch in Tucson, US, which has qualified sleep doctors on-site, take the subject so seriously that they’re deliberately isolated from the buzz of urban life, making them tricky locations to visit regularly.

Zedwell, on the other hand, is a city refuge that has made sleep its USP, tapping into the latest scientific research to deliver an experience that puts the bed front and centre of the hospitality experience.

“We have been researching the subject of sleep, and the best environment to promote sleep health and overall well-being for over five years,” says Aziz, who explains that during that time, over 20 prototype rooms were created to ensure the optimum night’s sleep.

Every inch of the hotel has been designed with slumber in mind, from the interiors that are covered in oak and lush greens designed to help guests switch off, to the rooms or “cocoons”, which Aziz says have been specifically tailored to satisfy “the human need to feel safe and secure when relaxing”.

These cocoons have been specially crafted to eliminate light, noise and bright television screens that sabotage a person’s best efforts to drift off. That means no windows, no electronic gadgets and no desk.

More specifically, the rooms have been created to nullify what science has termed the ‘first night effect’. According to researchers at Brown University, most people struggle to sleep in new environments because their biology is hardwired to stay awake. In short, unfamiliar stimuli – sounds in particular – trigger anxiety in a person’s brain, making them restless.

To try and outsmart this prehistoric conditioning, Zedwell’s beds are housed in oak-framed boxes with soundproofed walls and ceilings bathed in subdued light, while special filters pump and circulate purified air to eliminate allergens and dust. Meanwhile, downstairs, yoga and meditation classes have been devised to calm busy, overstimulated minds and menus have been made to induce peak drowsiness.

It’s worth noting that Zedwell was conceived and planned during a five-year period in which sleep became a currency in its own right: a time in which polemical books were published, most notably Matthew Walker’s bestseller, Why We Sleep, which links poor sleep to cancer, Alzheimer’s and numerous other diseases; magazines were launched solely dedicated to the topic; and podcasts like Sleep with Me were downloaded millions of times.

These discoveries spurred an awakening of sorts about the benefits of sleep and the terrifying consequences of not getting enough of it, powering a global ‘sleep business’ that is estimated to be worth £100 billion. With the exhaustion economy booming, Zedwell is positioning itself as a sanctuary for those experiencing too much of it. To better deliver on its mission statement, it sought the advice of Dr Neil Stanley, an independent sleep expert who has dedicated 38 years of his life to studying sleep and its effect on well-being.

It’s a topic that Stanley believes has been overlooked and overcomplicated. In fact, getting a good night’s sleep, he says, is fairly easy. The problem is that there’s too much information on it pouring through people’s newsfeeds. “[These days] pretty much everything most people know about sleep is probably wrong,” Stanley says. “To get a good night’s sleep you just need a bedroom that is dark, quiet, cool and comfortable, a relaxed body and a quiet mind.”

When it comes to hotels and their sleep-inducing capabilities, however, Stanley believes the message has been lost in translation. Hotels, he argues, have lost sight of their primary purpose, investing too much time and money in the latest gadgets and amenities, rather than on pillows and Egyptian cotton.

“[Sleep is] something that, bizarrely, hotels haven’t really concentrated on. Instead, they are vastly more likely to boast about their million-pound spa, their Michelin-starred restaurant or their lovely rooftop bar,” Stanley argues. “The whole point of a hotel is that you sleep there, because you can’t go home.”

More broadly, this assertion is backed up by statistics: according to new research carried out by Wyndam Hotels and Resorts, 46% of guests did not feel that hotels were doing enough to provide them with a good night’s sleep. A troubling admission, given that a third admitted to booking a hotel primarily to catch up on sleep.

For Stanley, party hotels are a good barometer of how far the industry has neglected this basic tenet of well-being, a hybrid creation he sees as anathema to everything a hotel should be. “It’s either a hotel or it’s not, it can’t be both,” Stanley says, “yet people design hotels so that they’re ‘attractive’ and the bit that they forget in all of this is the sleep aspect.”

Zedwell, Stanley says, could be an antidote to this restlessness, delivering a thoughtful, affordable hotel experience – rooms start at £100 a night – that focuses on the fundamentals of sleep hygiene.

In a time when sleep advice is more convoluted than ever – where pillows are created through algorithms, mattress companies have become hip start-ups and sleep robots go for over £500 – it’s refreshing, says Stanley, to see a hotel that embraces new science, but sticks to simple facts.

“What’s attractive about the whole Zedwell concept is that it’s basic,” he says. “Everything you need is there. You get a nice comfortable bed with good quality sheets and pillows, a toilet and a shower. That’s it and that’s all you need.”

What’s more, amid a growing body of evidence that sleep is the most pivotal aspect of human health – for Walker it is vastly more important than exercise or diet – it might be time to prioritise the former over the latter.

“Everybody now has a gym close by and lots of people have got a spa within a 10-minute drive,” Stanley says. “But the ability to sleep away from home is something that’s neglected and probably the most important aspect of well-being.”

As more research is conducted on the benefits of sleep and the lucrative business of sleep enhancement continues to serve armies of customers, it’s natural that hotels want to join the slumber party. After all, while a healthy body has never been easier to attain, the quest for an alert and energised mind has never been more in demand.

Price Asif Aziz paid for the Trocadero building in 2005.

Percentage of guests that felt that hotels were not doing enough to provide them with a good night’s sleep. 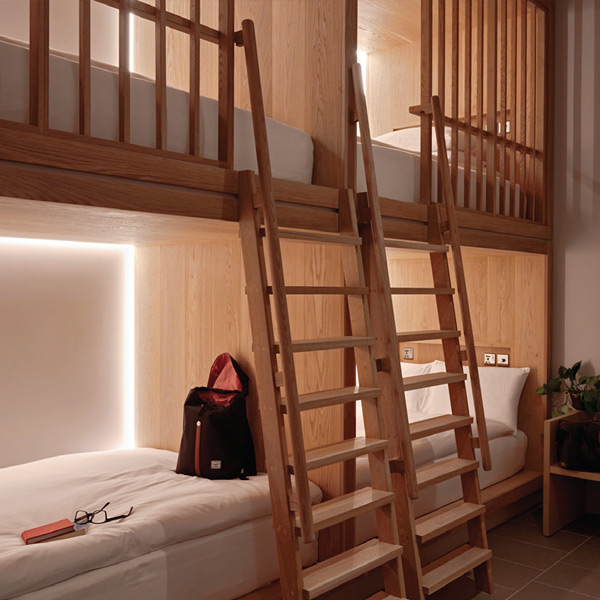 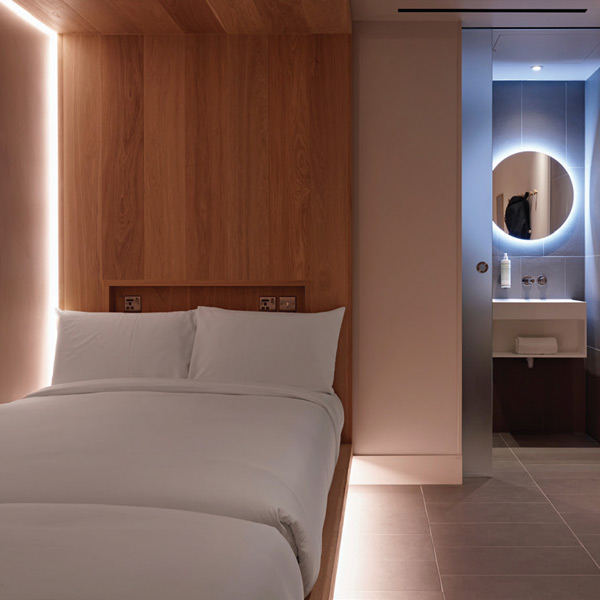 Guest rooms in the Trocadero hotel are equipped with only the essentials for a good night’s sleep.
Post to: