Small lifestyle concepts and big global players are making moves to try and harness the potential of co-working within their portfolios. Elly Earls meets Accor Innovation Lab’s Frédéric Fontaine and Zoku’s David Kijlstra to discover the extent to which their efforts can make hard work pay.

The value of the co-working industry’s biggest player, flexible-workspace behemoth WeWork, continues to rise. As of 2018, it was worth $20 billion, making it one of the five highest-valued private companies in the US, alongside the likes of Uber and Airbnb.

The rapid growth of the shared workspace sector is the result of the fact that the way we live and earn is changing. In the US alone, 56.7 million people work freelance, up by 3.7 million from 2014, according to a survey by global freelance platform Upwork and the Freelancers Union.

In addition, more companies are allowing their employees to work remotely, in the process reducing their overheads while boosting productivity and morale.

And though most of these freelancers and remote employees work from one place – whether that’s home, a café or their local co-working space – a growing number are choosing to take advantage of the fact that the remote nature of their work means they can set up shop anywhere in the world.

Co-working spaces help these digital nomads address one of the biggest challenges associated with working while travelling – isolation. Whether in London, New York, Tokyo or Amsterdam, workers can plug into a community of likeminded professionals and get some work done.

Integrating into the neighbourhood

With the lines between work, leisure and travel continuing to blur, it makes sense that the hotel industry would want in on the action. Yet, until recently, there have only been a handful of players – primarily brand-new lifestyle concepts – that have successfully catered to this market.

Micro-loft hotel Zoku, which opened in Amsterdam in June 2016, is one of them. When co-founder Hans Meyer realised about seven years ago that this was where things were heading, he set off for six months on the road to try the work-andtravel lifestyle for himself. He, co-founder Marc Jongerius and their design team then started building prototypes of what has now become the ‘Zoku loft’.

“It took six to seven years to develop the whole concept, more than 400 people helped us, and we received 6,000 feedback comments,” recalls commercial manager David Kijlstra.

“One thing we were sure of was that the concept was in line with what our target audience was looking for. We call them ‘global nomads’, and they usually work for fast-growing international companies and are looking for a true home base but also somewhere they can work very well.”

The sweet spot, it turned out, was a loft centred around a wooden table rather than a bed, with all the comforts of home – including a kitchen, a sofa, a flat-screen TV and even a pair of rings to do pullups. ‘Global nomads’ also have access to bright, open communal areas, including a co-working space, where they can socialise and be productive.

However, even with all that research, there was one thing the team hadn’t considered. “We noticed pretty quickly that a lot of locals wanted to come in and work and, as demand grew bigger, we thought we could maybe go further in our concept and better optimise the square metres we had,” Kijlstra says.

Now it’s not just Zoku’s nomadic target audience using the co-working space in its first property in Amsterdam; local freelancers and business owners can either sign up to work for a day – a day pass costs €25 and includes lunch – or a buy a €175 monthly co-working membership. “It has become this really nice mix of locals and international guests, and it’s integrated really well into the neighbourhood,” Kijlstra says.

The big boys step in

This idea of maximising a hotel’s underused assets was precisely the reasoning behind the launch of Accor’s AccorLocal initiative, which allows locals to book into a property’s facilities without being a hotel guest. And this has led the global group to move towards co-working in a big way.

Following its 2017 purchase of 50% of the French co-working operator NextDoor (the other half of the company is owned by Bouygues Immobilier), Accor and NextDoor announced in March that by 2020 more than 1,000 Accor hotels in Europe – across its economy, mid-scale and luxury brands – will introduce a co-working offering.

56.7 million
People who work freelance in the US.
Upwork and Freelancers Union

It’s part of a full repositioning and rebranding of the current NextDoor as WOJO, which will be made up of three different concepts. Through WOJO-Spot, Accor and NextDoor will integrate co-working basics into the lobbies of 1,000 hotels – starting with 150 in France over the next few months, which locals and hotel guests can access through a Freemium model.

“We believe we need to cater not only for nomads and resident co-workers, but also that there could be an appeal for our existing business guests of enhancing the co-working offering.”
Frédéric Fontaine

If someone simply wants to use the space to work, they’re free to do so; if they want to gain access to a wide range of benefits, such as becoming a member of the WOJO community, and a 10% discount on food and beverage in the hotel, it’s €9.90 per month.

Alongside this, 100 Accor hotels will have underused spaces transformed into fully functioning co-working spaces – or WOJO-Corners – by 2022. These will be complete with Skype booths, printing facilities, meeting rooms, and free-flow coffee and tea. In addition, members, who will pay either a daily or monthly membership fee, will benefit from the hotel’s other amenities, including fitness facilities and meeting rooms, as well as receiving discounts on rooms.

The final part of Accor and Bouygues Immobilier’s joint venture will see NextDoor – or WOJO – scale up from its 10 current co-working sites in France to 50 across Europe within the next five years.

“The demand on co-working is very high and it just keeps on growing,” says Frédéric Fontaine, senior vice-president of Accor Innovation Lab. “We believe we need to cater not only for nomads and resident co-workers, but also that there could be an appeal for our existing business guests of enhancing the co-working offering.

“Hotels are staffed 24/7 with people that know how to provide service and the facilities are already there. I really see this as the future of hospitality – more concepts coming together and merging to make better spaces.”
David Kijlstra

“We have the assets – teams, spaces, services such as food and beverage, meeting rooms – and currently these assets are focused on travellers and room rental, which means we have potentially underused space at certain times of the day or even the year. Plus, we’re open 24/7, which is a major benefit in terms of accessibility.

“We also believe we need to break the psychological barrier of entry that most of our non-hotel guests have when they come to a hotel – ‘I can’t get in because I haven’t got a room.’ Through these WOJO-Spots, we’re effectively saying, ‘Welcome, please come in.’”

The hope is that by partnering with an experienced co-working operator, Accor’s WOJO-Spots will have instant credibility because they’re delivering more than just the bare bones of a co-working proposition.

“In the co-working environment, community engagement, learning and events are all part of the experience – it’s not just about tables, chairs and Wi-Fi,” explains WOJO CEO Stéphane Bensimon.

“At WOJO-Spots, you can just sit down in the lobby and work free of charge, but if you want a bit more, you can buy a WOJO membership and have access to all WOJO places across the network, too. We believe this is a major differentiator in the co-working area.”

Kijlstra, who came to Zoku from Spaces – the world’s second-biggest provider of co-working spaces – often asks himself whether hotels can offer better co-working options than specialist providers. “They’re staffed 24/7 with people that know how to provide service, and the facilities are already there. I really see this as the future of hospitality – more concepts coming together and merging to make better spaces and use of city square metres,” he predicts.

Along with Accor, Zoku is certainly going to try and prove the point. 2020 will see the opening of two new Zoku properties – in Copenhagen and Vienna – and its development and acquisition team is constantly scouting for other sites, initially in the creative capitals of Europe, but ultimately in Asia and the US too.

Across the pond, the founding members of another purpose-built hybrid concept – Eaton Workshop – have had a similar idea. The hotel and its co-working offering – Eaton House – are designed to coexist and create a community of visiting guests and co-working members, according to the director of Eaton House, Kurt Slanaker.

While local members of Eaton House will have full access to the adjacent hotel’s hospitality offering, including the screening room and wellness facilities, hotel guests can use the co-working facilities and amenities and business services next door. There’s also a big focus on cultural programming and ‘progressive social change’.

At Accor, roll-out of the WOJO-Corner concept will take much longer than WOJO-Spot as it involves a refurbishment of part of the hotel. Each co-working space will also need to be tailored to the star rating of the brand. And despite the fact that introducing a co-working offer is currently an opt-in for owners and franchisees, many are already showing signs of interest.

“For them, it’s an opportunity to maximise an asset and to create a new guest experience,” Bensimon says.

They’ve also seen the success of Accor’s proof-ofconcept co-working space at the Mercure Paris Montmartre Sacré Coeur. “We can see traction; locals and nomads are both entering the hotel brand without a hotel room, they’re buying subscriptions and paying for that space,” Fontaine says. “Let’s see what the future holds, but it’s a trend that cannot be ignored; a trend that’s here to stay.” 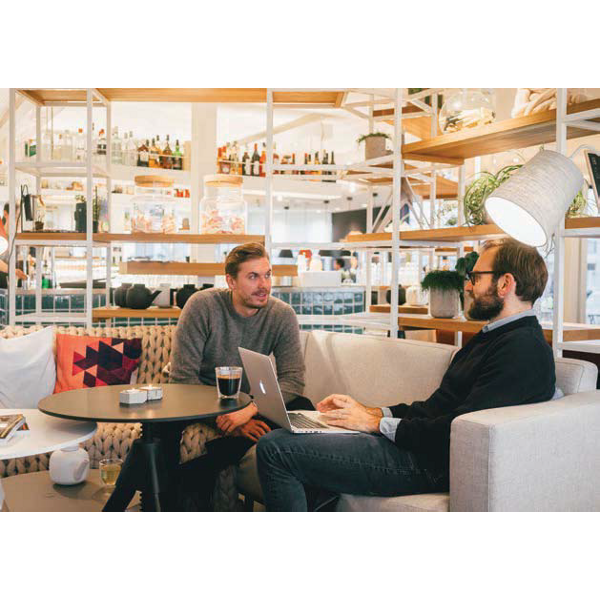 Loft hotel Zoku, in Amsterdam, provides travelling professionals with a place to work, collaborate and network. 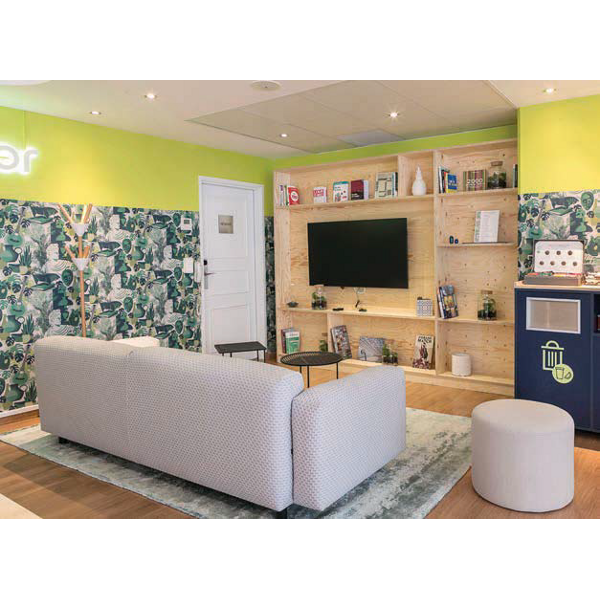 A NextDoor workspace in Montmare. The company was recently purchased by AccorHotels and Bouygues Immobilier. 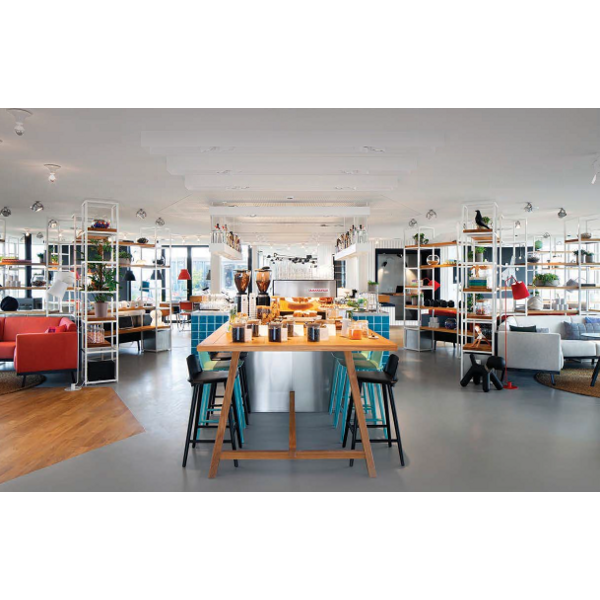