From Airbnb’s ambitions to the Marriott data breach to the likelihood of a second Trump term, for any hotel executive wanting a crash course on what to look out for over the year ahead, there was only one place to be – Berlin’s 23rd International Hotel Investment Forum. Hotel Management International takes stock with some of hospitality’s biggest hitters, including Chris Nassetta, Sébastien Bazin and Keith Barr.

In early March, more than 2,500 delegates, including some of the biggest names in global hospitality, descended on Berlin’s InterContinental hotel for the 23rd International Hotel Investment Forum (IHIF).

The opening economic overview was delivered by Thanos Papasavvas of ABP Invest, who announced that the economies of China and the US were no cause for worry – though his prediction that President Trump would likely be in office until 2025 will have caused some to break out in a cold sweat. Europe, on the other hand, was the “biggest concern”. “Merkel has been keeping the eurozone and Germany together, and she is about to depart with no one ready to replace her leadership,” he lamented.

Robin Rossmann of STR was also keeping a close eye on Germany, which currently leads Europe in the number of hotel rooms under construction. Elsewhere, Rossmann acknowledged that a World Cup hangover for Russia had been unavoidable and discussed fears Spanish resorts had hit a peak in pricing capacity in 2018, with guests being drawn back to North Africa. Nevertheless, across the continent, “drivers to travel remain and, while 2018 was amazing, 2019 is still expected to be strong”.

Chris Day of Christie & Co delivered the next presentation – ‘Buyers and Sellers: The Global Picture on Hotel Transaction Trends’. “Less than 20 years ago it was almost impossible to convince institutional investors to consider hotels as an investment opportunity,” he said. “How times have changed.”

Yields are continuing to sharpen with increased activity being seen in the Middle East and buoyant hotel investment in Spain, he continued. Institutional investors represented nearly 50% of the 2018 capital mix, demonstrating hotel assets are now seen as a serious asset class by this group. Day cited risks to the market as new supply, geopolitical events and cost pressures, predicting that asset management would become increasingly prevalent. He noted that banks now have a better understanding of the asset class. “We will continue to see low yields in prime locations with increased demand for opco/propco structures,” Day said. Investors were seeking leaner and more cost-effective models, with hostels and serviced apartments leading the charge.

“Savvy investors already see the hotel market as mainstream,” Day concluded. “Demand for quality assets in our market continues to grow. The hotel market has come of age.”

“The majority of hotel deals done over the past few years have been done by investors who invest across all asset classes,” said Bradshaw, indicating that hotels were now an asset class of choice, something de Marcilly agreed with wholeheartedly. “We don’t need to invest in hotels if we don’t believe the dynamics are good,” she said.

Looking at the investment options across real estate, de Marcilly continued, “Retail is challenging and office is very expensive. That leaves beds and sheds. We are investing a lot in beds – hospitality, student accommodation and hostels.”

Discussing the potential threat of disruptors, Bradshaw was relatively sanguine. “We were supposed to be dying because of Airbnb, but Airbnb is achieving staggering growth rates, and the hotel sector is achieving fantastic occupancy. It’s retail that is suffering,” he said. “So we have survived the mother of all disruption.”

The panel discussed the recent sale of Belmond to LVMH and the response to the transaction. De Marcilly said the transaction represented a long-term trend for luxury while Bradshaw said “this acquisition was a marketing manager’s dream, a real opportunity to own the customer”.

The final session of the opening day was an interview with Chris Nassetta, president and CEO of Hilton, conducted by broadcaster and presenter Nick Ross. Hilton is celebrating 100 years of operation this year, and Nassetta was keen to stress his vision for the group’s second century. “Blue-chip companies may only last 10 or 20 years, but we’re not limping over the line,” he declared. “Objectively our brands are stronger than they’ve ever been, and we’re opening more than one hotel every day.”

Tru by Hilton would be the most impactful brand upon the company’s portfolio over the next five to 10 years, he revealed, filling a gap under the Hampton by Hilton brand. “Generally, the world is moving to the bottom; it is just price, price, price, and if you compete only on this, you will lose,” he said. “The winners will be premium players who bring differentiation. We are asking new customers, young customers, what it would take for them to be loyal to us. Pioneering is about bringing to customers what they want and taking more friction out of the equation so as to better drive premiums.”

The first panel of the second day was another conversation involving one of global hospitality’s biggest names – Sébastien Bazin, chairman and CEO of AccorHotel. The executive was joined on stage by Mark Okerstrom, president and CEO of Expedia Group, and the pair discussed leading performance through innovation.

“We’ve done much diversification in business accelerators – the small companies,” Bazin said. “I do it because I really believe it is part of the future, but market-cap-wise, my investors still don’t understand it. You’ve done the same,” he continued, addressing Okserstrom. “Are we right or wrong?”

Though that must sound very tempting to a man in Bazin’s position, he certainly wouldn’t be jumping ship any time soon. “I wouldn’t do your job,” he teased Okerstrom. “I love my job because I’m seeing my clients. You never see yours.”

Generally, the world is moving to the bottom; it is just price, price, price, and if you compete only on this, you will lose.
Chris Nassetta, Hilton

“We take being local and part of the community very seriously,” said Knippenberg, as the conversation turned to sustainability. “If we can source a product locally, then we will. We have made a big impact in countries and communities where we can support local.”

“If all we are going to do is stop using plastic straws, that’s pathetic,” said Sarasola. “We don’t have a planet B.”

On the subject of driving direct bookings, the Room Mate founder continued to pull no punches. “OTAs understand that I want to steal their client,” he said. “They will come once and they will be mine, but we are all working together.”

All agreed that the travel and tourism sector’s efforts on behalf of the worldwide economy were not always matched in kind by political leaders. “Governments globally fail to understand the importance of the industry in terms of job creation,” said Barr. “We are also seeing more populist governments, not wanting migration, which will continue to apply pressure. We need to continue to communicate with governments as an industry.”

Willms discussed pushing against this tide when looking for fresh talent, recruiting from overseas and even partnering with refugee organisations. “We hire people in these countries and get them in language classes, bring them to German apprenticeships and put them in school,” he said. “Keeping them in the industry is important, and in our company even better.”

Conversation turned to the threat of new platforms and disruptor brands. “Airbnb has significantly reduced occupancy and affected our profitability,” Kong acknowledged. “But the Airbnb experience is inconsistent; if something goes wrong there is no one to put it right. Our industry should wise up to how we market our industry and promote what we offer over Airbnb. We are a different product.”

González believed much of this came down to savvy marketing. “In many other industries involving consumer goods, they pay a lot of attention to how the brands resonate with consumers,” he explained. “The moment a consumer sees that you think about them, their thoughts and experience, you have their loyalty.”

The final day of IHIF 2019 opened with a series of interviews with providers of alternative models within the hospitality sector. The first of these was with Greg Greeley, president of homes at Airbnb, who claimed that the rental megabrand was in “the magical travel business”. He claimed too many hotels were sensing threat when they should be seeing opportunity.

Later in the day, Liam Brown, Marriott International’s new European head honcho, was interviewed by Questex’s Alexi H Khajavi. Brown, having recently returned from living in the US, praised the European hotel market for having “remarkable breadth and depth” and spoke about wanting to create “raving brand fans” across the continent. Quizzed on the recent data breach, Brown said there was work to do in order to regain consumer confidence. “It happened in the Starwood reservation database, which has since been retired,” he began. “Our forensics are complete and our mission is to continue to work to have the trust of our guest and ensure it doesn’t happen again.”

“In five years,” Karr claimed, “every one of the major hotel brands will have a home accommodation brand in their portfolio… in an industry that is growing at 30% each year, there is space for a lot of players.”

“The customer wants home accommodation and ultimately that is what wins,” Ward agreed. “But what we can do is bring people together for common experiences, and Airbnb can’t.”

On the subject of aping other models, Ueberroth said, “The hard brands have all launched a version [of Preferred Hotel Group]. It is not competition, but it validates what we do.”

Talking about the sheer level of variety already on the market, Lalvani said, “Repeat bookings are totally driven by the experience on property – the number of hotels and brands doesn’t matter. But young people around the world now think first about home accommodation before hotels. Hotel companies are naive in not recognising this.”

If opening minds had been the intention of this year’s conference programme, organisers can consider it a great success. There may still be uncertainty surrounding where exactly we sit in the performance cycle, but one thing is certainly clear – 2019 is already shaping up to be a very interesting year. 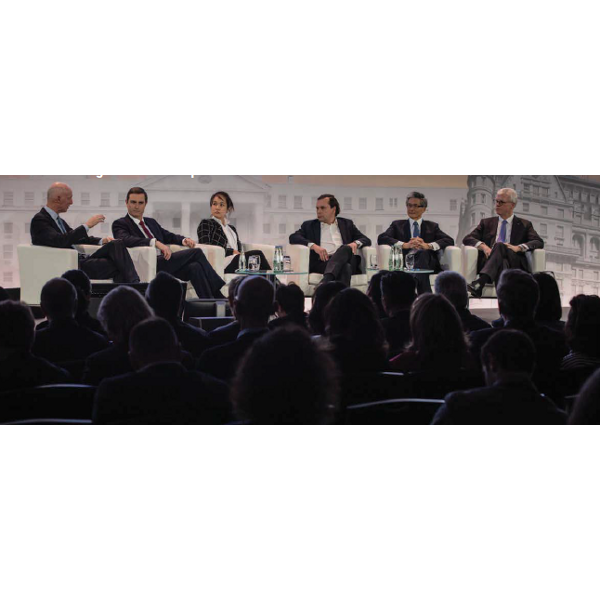 CEO’s from some of the biggest names in hospitality come together to talk on the subject of ‘Adapting to Survive & Thrive’. 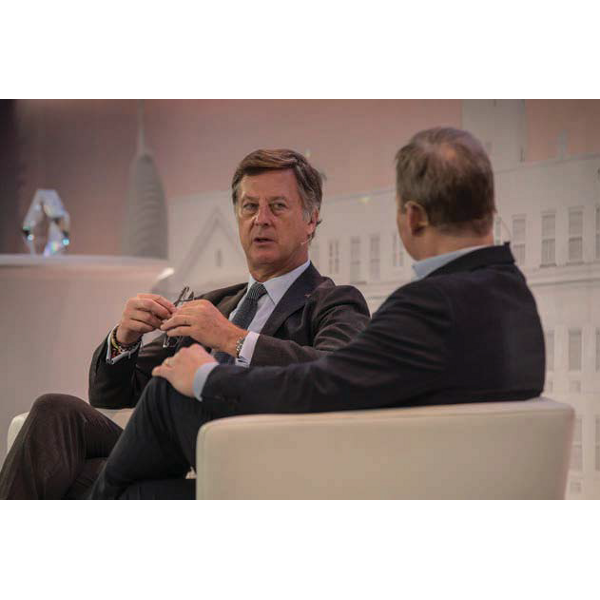 Sébastien Bazin, chairman and CEO of AccorHotel, and Mark Okerstrom, president and CEO of Expedia Group, discuss the importance of innovation.
Post to: