Straight up with a twist

The creation or evocation of local experience and culture has become a common feature of design briefs as guests increasingly shun the cookie-cutter model, and demand ‘authenticity’ from the hotel experience. But what does the term truly mean and are hotels capable of creating new authenticities? Ross Davies takes a look at some recent award-winning projects feted for this very quality and hears leading hoteliers, including Nick Jones of Soho House & Co, discuss applying fresh spins on old concepts.

The consensus among judges at this year’s AHEAD Global Awards was crystal clear: authenticity is dictating contemporary hotel design. Speaking at the event – notable for featuring two simultaneous ceremonies at London’s Ham Yard Hotel and New York’s Crosby Street Hotel, connected through a live feed – Aliya Khan, Marriott International’s vice-president of design strategies and jury member, dismissed cookie-cutter models as a thing of the past.

“This isn’t about big-box hotels anymore,” said Khan. “It’s about authenticity and being relevant to the locale.”

Authenticity for the win

Khan’s claim was self-evident in the list of victors, dominated by conversion projects around historical buildings. Alila Yangshuo, for example, a former sugar mill nestled in the mountains of China’s Yangshuo County, was awarded the Ultimate Winner prize at the event. Designed by Vector Architects, a Beijing-based studio, the hotel was singled out by jury member Cristina Laurijssen, director of design at Rosewood Hotels, as being “true to its heritage and very sensitive to its environment”.

Another project that won judges’ plaudits was Singapore’s Warehouse Hotel, a conversion of a 19th-century spice repository on the bank of the city state’s main river into a boutique hotel.

Khan described the property – designed by Asylum and Zarch Collaboratives – as one that “speaks to the authenticity of the location. It celebrates its original use, but does it in an interesting and novel way.”

But this sense of authenticity is not limited to the Asian hotel scene, the luxury segment, historical buildings or even the evocation of a treasured heritage. Inspiration can come from the mundane, the utilitarian, even the forgotten or unfashionable, so long as it is true to place and sincere in spirit.

Soho House & Co founder Nick Jones has an incredible track record of breathing new life into old buildings – and entire districts – through an enviable eye for spotting the potential in conversion and construction opportunities that speak simultaneously of locale and brand philosophy. Jones’s latest project lies some distance from the achingly hip, typically inner-city destinations that made Soho House its name, drawing on an arguably rose-tinted narrative embedded in a lost age of pre-Motorway provincial England: the roadside services – a concept that in both its original and updated forms often drew inspiration from the US diner, creating something uniquely British in the process.

Earlier this year saw Mollie’s Motel and Diner open its doors in Oxfordshire, UK. Located off the A420 road, between Bristol and Oxford, the hotel and restaurant concept is Soho House’s latest brainchild. The aim of Mollie’s is to transform the UK roadside experience from one of A-to-B expediency to one that travellers can immerse themselves in an experience altogether more pleasurable.

Each of Mollie’s 79 bedrooms serves as a homage to minimalism, from the pale-green walls to blonde-wood panelling and velvet armchairs. But for all its modern furnishings and technology – reservations can only be made through its app or website – Mollie’s also doffs it cap to its mid-century precursors on the other side of the Atlantic through its diner, which includes Cadillacstyle banquettes, and a menu of burgers and waffles.

According to Jones, if Mollie’s proves a hit, Soho House might well be cutting the ribbon on similar such roadside properties in the near future. “It’s been a long-standing passion project of mine to have a go at reinventing the British roadside experience,” Jones explains. “I like looking at how we can change the way things are done and improve them for the customer. My aim with Mollie’s is to offer affordable style for everyone to eat, drink and sleep over.”

Soho House started life as a members club and exclusivity remains a core element of that brand, but this new offering seems altogether more democratic, both in design and execution. “[The hotel] is for everyone,” Jones claims. “We’re seeing people staying who are travelling to the area for work in the week, those who need a spare room in the area, and local people who have friends or family staying and want to put them up for a night. I hope the local community will continue to see Mollie’s as an exciting addition to their area.”

But it must be asked whether authenticity is a relevant metric when discussing a concept that draws so heavily from an experience that is itself foreign and in the process, creates something genuinely new. Jones and the team acknowledge the deep dive into US diners and its end result is readily recognisable to anyone who has taken a road trip through the US – albeit a somewhat idealised version.

“We did a lot of research into the 1950s, and the American motel and diner experience,” Jones acknowledges. “Taking inspiration from the finishes used within the restaurants, we have kept the materials true to those used back in the 1950s and incorporated those into the design. For example, we were inspired by the stitching used in old 1950s American Cadillac cars for the design of the banquettes in the diner. Our aim was to bring something relevant to the roadside and reinvent the typical American diner again, but with a contemporary twist.”

This does feel like the start of a brand roll-out, though that need not necessarily dull the sense of authenticity and originality Jones and the team have sought to create. “We want to see how this does first, but if all goes well, I want to open more around the UK, on the roadside and in city centres. We’re looking at opening another motel and diner near Bristol, and a city centre Mollie’s in Manchester. It will have all the same values – affordable style, comfortable rooms and mobile booking and check-in, but each one will be slightly different.”

The focus on remaining true to one’s values while celebrating and encouraging difference from property to property, neatly articulates the idea that authenticity does not need to be conveyed through design alone. This also highlights that cultivating cultural links to a locale can be achieved through new builds as well as conversions.

Jones may have built a homage to the mid-century US from the ground up, but Tokyo’s Hoshinoya – another winner at this year AHEAD Awards – reconstructs a more ancient tradition though erecting a contemporary take on the ryokan, a type of traditional Japanese inn. According to Design Hotels COO Serdar Kutucu, the Hoshinoya is a contemporary concept that “really respects the cultural heritage”.

Victorious in the New Build and New Concept categories, it is a balance that has clearly been struck successfully. “Hoshinoya brings the ryokan experience into the city of Tokyo in a way that really respects the cultural heritage and in a way that actually hasn’t been seen in any other hotels in Tokyo,” Kutuchu continues.

So, whether it is a US diner in rural Oxfordshire or a contemporary spin on a hospitality concept dating back to the eighth century in hyper-modern Tokyo, if authenticity can be delivered while also producing something entirely new, what does creating a local authentic experience in the context of hotel design actually entail?

First and foremost, properties need to transcend bricks and mortar, and convey the very essence of the locale. Instead of being a stand-alone entity that only caters to out-of-towner guests, the hotel must have the potential to carry totemic significance for local communities.

Overlooking Miami Beach, Faena Hotel is a good example of a property that has successfully created this holistic experience. Winner of the Events Spaces category at the AHEAD Awards, the property was praised for its arts and performance space that hosts local theatre showcases and artistic productions.

Just as every picture is said to tell a story, so must contemporary hotels do the same. Today’s guests, particularly millennials, are not so much interested in gratuitous bells and whistles but rather an Instagrammable experience that tells a story. This means hotels need to work harder to differentiate themselves and position themselves as authentic.

Designers and architects are tailoring efforts accordingly. For instance, international design company HKS Architects now has a portfolio of hotels that focuses on promoting guest interaction with local attractions. This includes the Lionsback Resort in Moab, Utah, which backs onto a national park that has become hallowed ground for extreme sports enthusiasts. As such, any guest that stays at the property is expected to become at one with the surrounding parkland.

But does tech also have a role to play in creating a more authentic hotel experience? If a guest’s head is glued to a smartphone, how can the surroundings truly be savoured? HKS design director Tom Sprinkle argues that the hotel’s local landscape should offer “a relaxing break from a 24/7 hyperconnected modern world”.

It would appear that some of the bigger hotel brands are cottoning on to the trend of localism. Winner of the 2018 MEED Hotel of the Year, the Four Seasons Hotel Kuwait at Burj Alshaya might be a showcase in high-end luxury, but it is also unmistakeably Kuwaiti in its feel.

Designed by Gensler, its concept is based around mashrabiya latticework – an openwork framework that has featured in traditional Arabic architecture for centuries.

According to Trevor To, an architect at Gensler’s London office, the brief from Alshaya Group – one of the world’s largest franchise operators – was based around the question: “How can we unite two worldrenowned lifestyle brands through architecture to win the hearts of the Kuwaiti people?”

This brief appears to have been fulfilled. By To’s reckoning, “The hotel is now well-known in the local community and people have no difficulty in finding its location.”

It is a reminder that everything was new at one point in history and that landmarks, even entire identities, can be created, as well as referenced, riffed upon or reinvented to create an authenticity entirely its own. 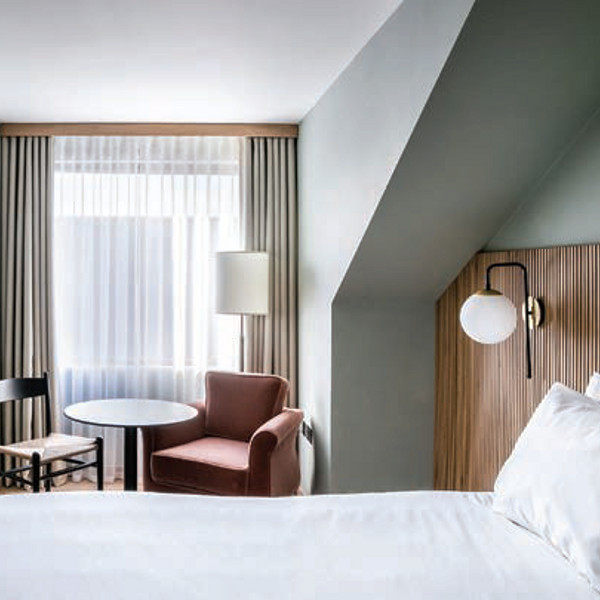 The latest brainchild of Soho House, Mollie’s rooms are a demonstration of minimalism. 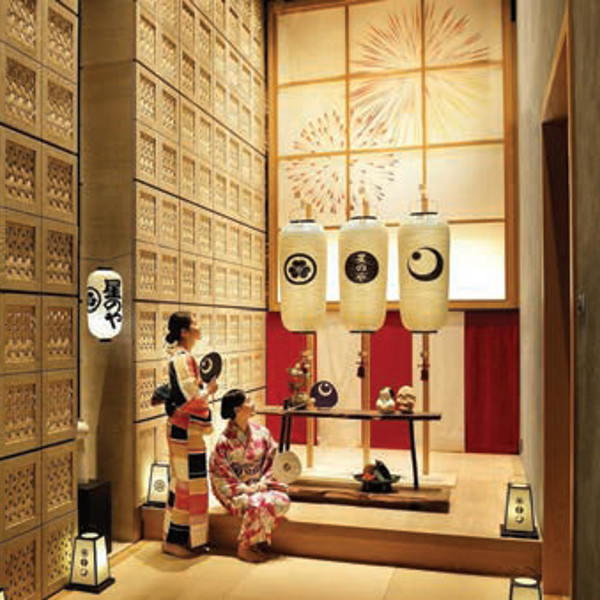 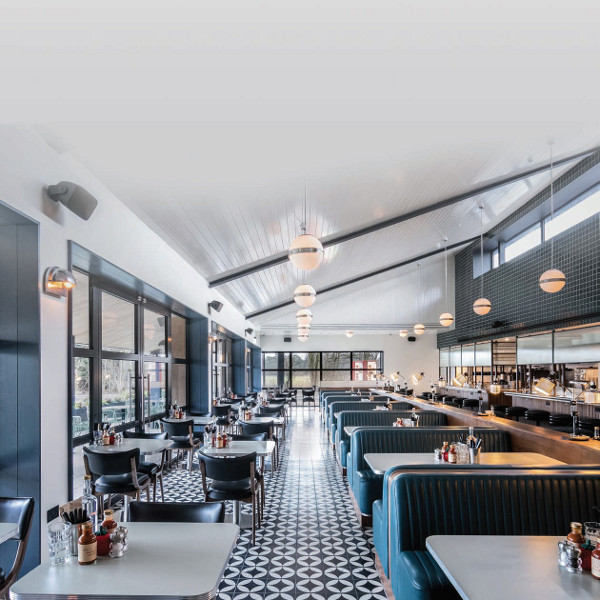 Mollie’s Motel and Diner includes Cadillac-style booths with a menu of burgers and waffles.
Post to: