In a world that feels like it’s hurtling into a chaotic and uncertain future, the lure of nostalgia is an intoxicating thing. Nowhere is this more apparent than in the sphere of hospitality design, where hotel designers are tapping into a yearning to go back in time. Will Moffitt speaks to James Twomey, architect and company director of ReardonSmith architects, about turning The Beaumont into a luxurious homage to 1920s Jazz age decadence, and Anne Becker Olins, senior vice president for luxury brands Europe, design & technical service at Accor, about revitalising the Old War Office (The OWO) and bringing the much coveted Raffles brand to London.

F.Scott Fitzgerald once said that “the test of a first-rate intelligence is the ability to hold two opposed ideas in mind at the same time and still retain the ability to function”. Sitting in the central lobby at The Beaumont hotel, Fitzergerald’s much cited quote – and the era that birthed it – spring to mind. The Beaumont is, after all, a place of dynamic contradiction: a newly renovated hotel in the heart of London enveloped by 1920s New York Jazz era decadence.

From the chessboard floor and oak panelling to the glistening chandelier and newly fashioned Magritte Bar inspired by the historic Stork and “21” Clubs in Café society New York, the interior is covered head to toe in an Art Deco aesthetic. In a suggestive nod to the era’s great novella, there is even a ‘Gatsby’s Room’, and while it’s not quite roaring – it’s midday on a Tuesday – you can imagine Fitzgerald’s quintessentially American anti-hero perched on one of its many armchairs cocktail in hand.

If the late Russian-American philosopher Svetlana Boym talked of nostalgia as “grieving for a past that has been lost” The Beaumont is a bold but carefully orchestrated celebration of a historical period that continues to enthral and entrance; and while it’s Mayfair postcode might be unique, it chimes with a broader trend of hotels paying homage to a romanticised past. These efforts run the gamut from newbuilds made to feel timeless or old – ala The Beaumont – all the way to wholesale restoration projects.

Naturally, such properties diverge in terms of offering. Just as it has become commonplace for boutique hotels to draw on or mythologise past eras to stand out from generic brands, grand old hotels in major European capitals fit nicely with the style and demands of the luxury segment. Either way, there is no denying that an established cohort of architects and designers are becoming well versed in the art of nostalgic design.

“Architects and designers use nostalgia to appeal to an audience on a ‘feel-good’ level by tapping into people’s desire to feel a sense of belonging, meaning, and security,” says James Twomey, company director of ReardonSmith architects and one of the key figures behind The Beaumont. “Their creations are endowed with emotion and sentimentality that connects with their audience and elicits a pleasurable feeling because of the comfort of the familiar beauty of the period.”

Part of the original project team enlisted to breathe new life into the hotel in 2014, Twomey has been hard at work on a renovation of the property, which has seen the installation of the new Le Magritte Bar. Meanwhile, the old bar has undergone a complete transformation to create Gatsby’s Room, and vibrant murals have been added to the ‘Colony Grill’ room.

To bring this “one-of-a-kind luxury hotel” to life, Twomey steeped himself in the cultural and visual world of 1920s glamour and decadence. He cites the golden age of travel and the high glamour of old Hollywood as key influences behind the era’s visual pull. On the other side of the coin came mass poverty and a generation struggling to overcome the horrors of First World War.

“There’s absolute glamour and decadence, and romance and grittiness. From a design point of view, all architects and designers shamelessly bask in the glory that is the 20s,” Twomey says. “Aesthetically, it’s informed a multitude of art forms, architectural interiors… the jewellery, the object art, the watercolours, the clothes, the fashion... there’s no end to what they tirelessly played with, and what it’s still about today.”

For Twomey, good design is about rich and precise storytelling. The Beaumont’s creation in 2014 while collaborating with Richmond International, he says, even had a central Gatsby-type character in mind with the brief outlining ‘his’ detailed ten-page backstory. An enigmatic figure ‘Jimmy Beaumont’ left America for London fed up with prohibition-era restrictions. The Beaumont is his brainchild, an institution made in the image of the New York hotels he left behind.

While this narrative might sound distinctly Fitzgeraldian, Twomey waves away any claims that he or his partner in crime for this latest renovation, renowned interior designer Thierry Despont, simply mimicked or rehashed old clichés.

“Pastiche design is easy. There’s a place for it, but you couldn’t possibly blindly copy,” Twomey says. “It’s got to be emotive, it comes back to storytelling. We’re all storytellers innately. In the 1920s, when it comes to hotels there’s no competition. It’s a narrative that makes people feel all sorts of things. We buy into an experience because it’s theatre.”

Suitable for the silver screen

Whether it’s The Beekman in New York, with its mix of antique style and stunning pyramidal forms, or The Adlon in Berlin with its marble columns and grand ballrooms, there is something enticing about occupying a space that feels as if it has weathered the currents of history. In fact, director Wes Anderson was so enamoured with the fading glamour of fin-de-siècle hotels of central Europe that he created his own. Set in a fictional middle-European country called Zubrowka, Anderson’s The Grand Budapest Hotel (GBH) is loosely based on the opulent Grand Hotel Pupp in Karlovy Vary, and the Art Nouveau Gellert Hotel in Budapest. Just like those gilded hotels of old, the GBH is filled with swirling staircases, pastel colours, velvet and marble.

The number of rooms in The OWO after a five-year transformation, along with 85 branded residences to the public.

While it might be imaginary, Anderson’s jumbled aesthetic has been formative. In the words of architect and design critic Edward Heathcote, “it might well be the greatest single influence on contemporary hotel design over the past decade”.

Fortunately, not all hotel designers need to create historical fables. Sometimes that history is ingrained into the very fabric of a building. Take Whitehall’s Old War Office (OWO), soon to become a historic Raffles hotel. Originally completed in 1906, and designed by British architect William Young, the trapezoid structure has stood witness to many world-shaping events. It’s offices once housed the likes of Winston Churchill, David Lloyd George and John Profumo, and Ian Fleming, whose work in Naval Intelligence operations at The OWO informed his fictional spy novels.

The legacy was undoubtedly attractive to Accor who selected the property as the ideal site for the UK’s first Raffles hotel. In 2022, a monumental five-year transformation will see The OWO open its 125 rooms and suites and 85 unique branded residences to the public.

“This is not contemporary. We are building a very timeless, very classical hotel,” says Anne Becker Olins, senior vice president for luxury brands Europe, design & technical service at Accor. “I think with this building, you’d be stupid to change anything. What we’re doing is restoring it.”

An experienced hotel designer, Becker Olins has worked on a number of prestigious projects, not least the much revered Peninsula hotel in Hong Kong, which blends colonial-style old school luxury with distinctly Asian elements. She first inherited the project in summer 2018, charged with overseeing its delicate restoration, and despite visiting The OWO around 50 times since, the sheer scale of the building remains astonishing.

“I know that the OWO will be very unique. And I can tell you why because no one has the spaces,” Becker Olins explains. “When you walk in, you have triple height spaces, you have seven metre ballroom heights, you have staircases [that go on] forever. And when you come into the courtyard, you see the volumes. It’s about space. And these days space is a value that you can’t measure.”

Of course, part of the brief has been to retain the venue’s baroque heritage, while at the same time install the necessary fittings and fixtures that will enable it to function as a contemporary London hotel. The basements, Becker Olins admits, “took forever”, as did concealing the myriad gadgets and wires needed to power air conditioning, lighting, security and fire alarms to enable The OWO to function. By burying these modern necessities out the way, the building’s deep historical roots can take centre stage.

“Whenever I have British visitors with me walking the sites, and they stand in these famous offices, like Churchill’s office, they have tears in their eyes. Seriously, big, strong, grown-up men because it’s very touching,” Becker Olins says. “I’m an architect, I feel people react to space. Even under construction, there are 900, sometimes 1200 people on site right now. Even with all these people around you feel the history.”

Whether they’re making newbuilds feel old or reshaping the interiors of old courts and war offices, hotel designers are seemingly tapping into a yearning for a romanticised past. What is it, then, about the human capacity for history worship and fanciful nostalgia that endures?

“We’re all storytellers innately. In the 1920s, when it comes to hotels there’s no competition. It’s a narrative that makes people feel all sorts of things. We buy into an experience because it’s theatre.”

“We are all affected and stimulated by historical and personal nostalgia, most of us are shamelessly sentimental and have a wistful affection for the past,” Twomey says, adding that nostalgia is “closely linked to storytelling and storytelling is innate in all human beings”.

“It’s probably one of the remaining values we have,” Becker Olins concludes. “I think we are surrounded by constantly changing things. We are overloaded with information and new trends. Nostalgia gives us a feeling of safety. A feeling of comfort.” 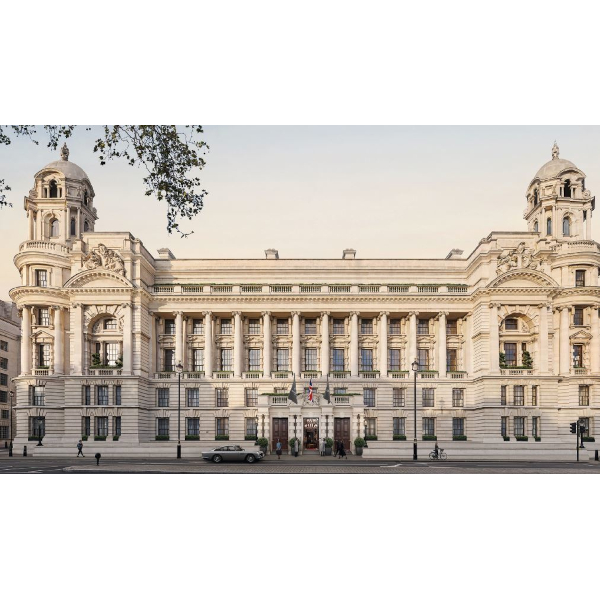 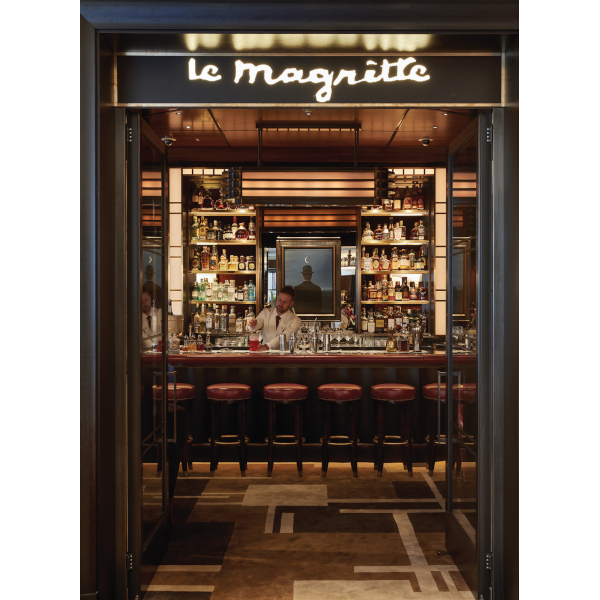 Le Magritte Bar in The Beaumont Hotel, belonging to the tradition of American bars, which thrived in Paris and London in the 1920s. 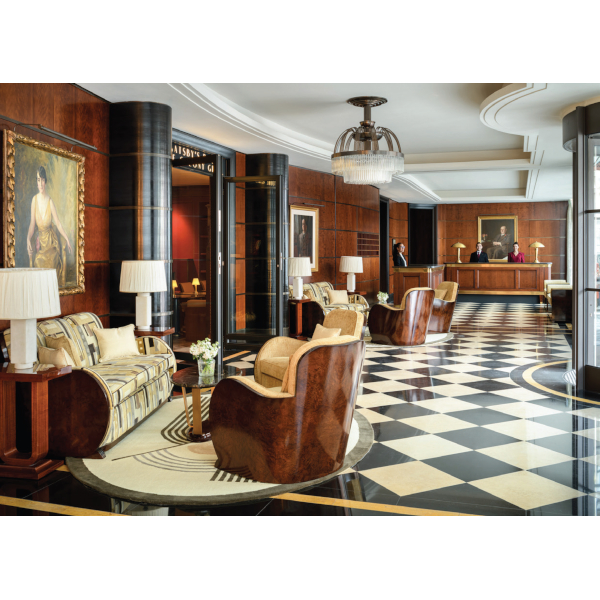 The lobby and reception at the 5* Beaumont Hotel in Mayfair.
Post to: