Biophilia is a well-worn phrase and an expansive concept, encompassing everything from indoor shrubbery and plants to natural retreats made from bio-friendly materials. For many hotels, using natural forms is a handy way of enhancing the lobby decor, but for others a growing focus on connecting to nature is a pivotal part of hotel wellness. Abi Millar speaks to WOHA co-founder Richard Hassell and Bill Browning, founding partner of Terrapin Bright Green, about the growing science of biophilia and the role it can play in enhancing the health and well-being of hotel staff and guests.

Over the last few years, and especially since the start of the pandemic, many people have faced a moment of reckoning about their relationship with the natural world. With climatic calamities rarely out of the news – forest fires in Australia, ice caps melting, rising sea levels in the oceans – there has been a wave of what is being termed ‘eco grief’. The fact that we need nature, that we are part of nature, has never been clearer.

Confined to our homes in an unprecedented way, it has been common to draw solace from nature in whatever form we can find it. Having access to a garden during the early lockdowns was spoken about as a proxy for privilege. Houseplant sales boomed. Birdwatching was suddenly modish. People took relish in the photos of animals recolonising abandoned urban roads. These moments of connection served to mitigate our sense of confinement, and maybe even soothed our anxiety about the destruction we were seeing on the news.

All this is to say that, as life goes back to some kind of normal, it may become harder, or less desirable, to draw a clear line between the built environment and the natural world. Biophilia (literally ‘love of life’ in Greek, but in practical terms a concept around how nature can support people’s well-being) has very likely acquired a new urgency during the months we’ve been penned in our homes.

“I think the pandemic has shown how valuable a biophilic environment is,” argues Richard Hassell, the co-founding director of Singapore-based architecture practice WOHA. “Having one in your home when you’re on lockdown, or having access to fresh air and greenery when you’re spending multiple weeks in a quarantine hotel, helps with your general well-being, your psychological and physical health. So, while it’s always been very important in WOHA’s work, biophilic design has probably moved up on people’s priority lists.”

“The fact that we’re willing to charge more for a room just based on its view is indicative of the benefit of biophilic design.”

Environmental strategist Bill Browning agrees. As founding partner of the sustainability consulting company Terrapin Bright Green, and co-author of the new book Nature Inside: A Biophilic Design Guide, he is a long-time advocate for the power of green design. He points out that even before the pandemic, we typically spent 90% of our time indoors.

“I think we’ve become much more conscious of how often we’re indoors because we’ve been in a more limited amount of different spaces over the course of last year. I think people will become more aware of the impact of those spaces,” he says.

As the hotel industry comes back to life, there will be lessons to take on board. If an indoor space can somehow evoke the forms of nature, or can bring nature inside its bounds, guests may feel more relaxed and cared for, and may even be inclined to pay more.

“When you come into a hotel, you’re coming into a new environment, which can be exciting but also a little stressful,” says Browning. “So how do we make that experience memorable and pleasurable? How can design measurably lower your stress? Those would be some of the preferred outcomes we’d like to see, and our research validates what we’ve intuitively known for a very long time.”

In 2017, Terrapin conducted a study on hotel room pricing trends, observing the differences between rooms with a view on to nature, and those without. They discovered that, for resort hotels, there was an 18% increase in the average daily rate for rooms that looked out on to water. The difference was less pronounced in urban hotels, but a water view was still associated with an 11% premium.

“The fact that we’re willing to charge more for a room just based on its view is indicative of the benefit of biophilic design,” says Browning.

Terrapin also wanted to find out how biophilic design affects people’s use of public spaces. The team selected six hotels in Midtown Manhattan – three conventional hotels and three with strong biophilic elements – and observed the individuals who entered the lobby at various points during the day. In the conventional hotels, the vast majority (75%) of people were just passing through, whereas in the biophilic hotels 36% of occupants were sitting down and using the space.

“If I can get you to spend more time in the lobby, then I might be able to sell you another coffee or some food, making that space livelier and more convivial,” says Browning. “We followed up by looking at these hotels’ reviews on TripAdvisor, and found that in the biophilic hotels, design and decor got a much stronger response. They also got more than twice the response on experience than conventional hotels. So biophilia is designed to change the way you think about the brand.”

Demonstrably, then, biophilia is good for hospitality – the question is how a hotel can go about incorporating it. As Hassell explains, there are many different ways to make a start.

“We tend to use real, natural elements like plants because we want our projects to get a strong biophilic response and to have a positive, lasting impact on human beings” he says. “Besides nature, we’re really interested in things that incorporate natural patterns, production or materials.”

WOHA has a number of biophilic projects to its credit. Perhaps the most notable is the Parkroyal Collection Pickering, which features 15,000m2 of greenery (more than double its land area) in the form of verdant balconies and terraces.

“The lush, tropical terraces have become a landmark of the district,” says Hassell. “Every room in the hotel has a view of the greenery, and guests can enjoy that feeling of being on a tropical island despite the inner-city location of the hotel. The terraces also serve to shade the building from the sun and help to reduce the energy consumption of the hotel to cool the interior spaces.”

Similarly, the Oasia Hotel Downtown – a high-rise in the middle of Singapore’s business district – is wrapped in what Hassell calls a ‘green envelope’, which couples its aesthetic appeal with ecosystem services like filtering the air and attracting biodiversity. Meanwhile, WOHA’s most recent public housing project, Kampung Admiralty, includes a rooftop park and even an urban farm.

“This is not a hospitality project, but the strategies that we were able to implement here and the lessons we have learned are being used in new projects, which include hotels and resorts,” says Hassell. “Our projects are built prototypes of how we incorporate nature and design ecosystems where nature is not just presented for human benefit, but as a living and growing system that improves the world outside too.”

That said, biophilic design doesn’t necessarily entail turning the space into a tropical resort. You can start small and put a ‘green wall’ in the lobby. You can ensure there are views out to nature. You can incorporate ‘representational experiences’ of nature through the use of materials like wood and stone, or through playing around with lighting design. You could also include some biomorphic forms. As neuroscientists have found, natural patterns are easier for the brain to process.

“There’s a type of patterning called fractals, which are mathematical patterns that repeat at scale,” says Browning. “Think of flames dancing in a fireplace, or waves on a beach – two things that we’ll stare at for hours – or the dappled light under trees. When we have human design objects that replicate those sorts of patterns, there’s a noted drop in our stress levels. Designers are looking more and more at how they can design fabrics and carpet patterns that benefit from what we’ve learned.”

Another category of experiences, discussed in Terrapin’s report ‘14 patterns of biophilic design’, relate to the spatial conditions of the building.

“The first of those is a pattern called ‘prospect’, which is an unimpeded view through space – this is good for wayfinding and perceptions of safety,” says Browning. “There’s also a pattern called ‘refuge’, in which my back is protected and I may have some form of canopy overhead.”

To give a common example, a well-protected booth in a restaurant, which is raised up on a plinth, would give you ‘prospect’ and ‘refuge’ together. Factor in a soaring atrium (an example of what Browning calls ‘risk/peril’) and some partially obscured views (‘mystery’), and you have a good example of the ways an interior space can emulate the natural world.

To this extent, some biophilic features are almost biophilia by stealth – guests will notice that they’re feeling relaxed without necessarily knowing why. A science and an art in equal measure, biophilic design will be a crucial component of hotels’ wellness strategies over the years to come.

“There are many benefits, but to us the most important one is the human reaction to nature and how it supports well-being emotionally and physically. We see biophilia as a value in design, and look for ways to creatively find opportunities to create biophilic environments,” says Hassell.

Put another way, as the impetus slowly begins to shift from battling a deadly pandemic to negating a looming climate crisis – and making buildings healthier and more efficient places to live – biophilia takes a concept partly powered by eco-grief and seeks to convert it into eco-energy. 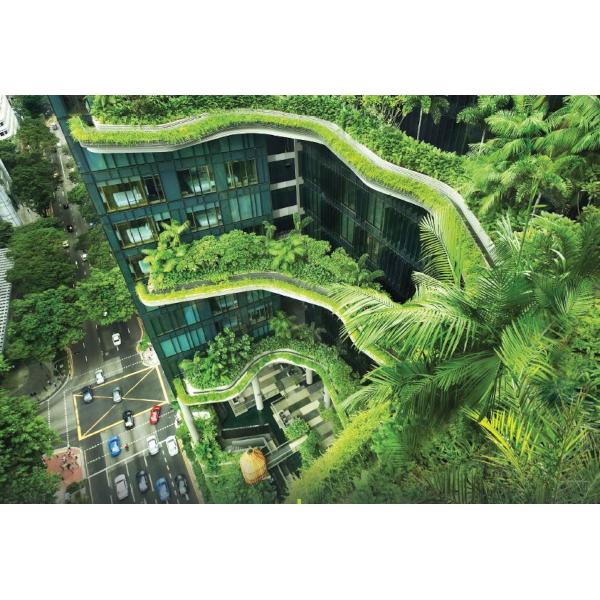 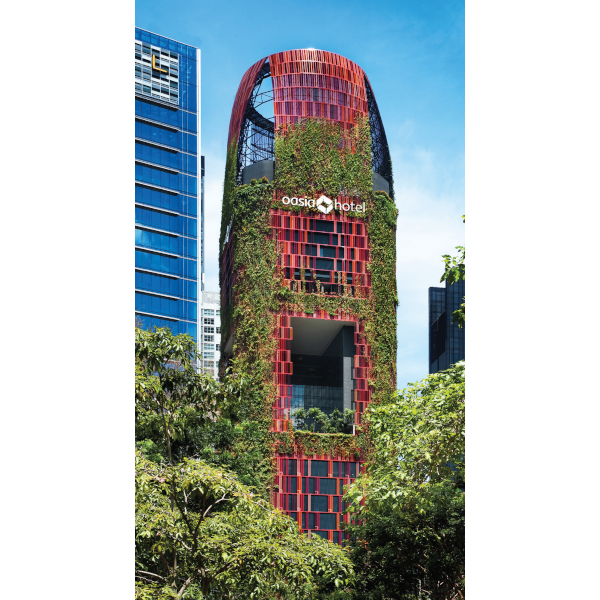 Oasia Hotel in downtown Singapore is another model of how to unite natural and design ecosystems. 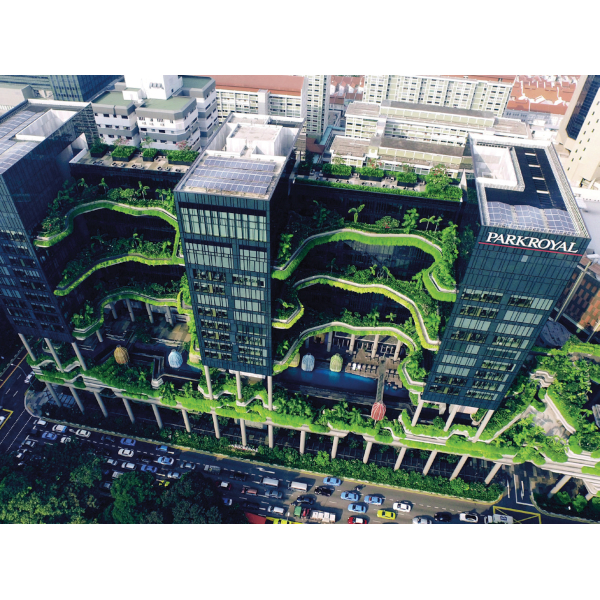 WOHA co-founder Richard Hassell believes that fresh air and green space is integral to wellbeing, something that the Parkroyal provides in abundance.
Post to: