Modular construction methods significantly defray development costs for operators but have traditionally resulted in economy offerings on greenfield sites. Now, the assembly of the AC Hotel NoMad in the centre of Manhattan promises to make prefabrication an urban affair as well. Greg Noone talks to Rob Wagemans of design firm Concrete, architect Danny Forster and Marriott International’s Eric Jacobs about whether the time has come for large-scale modular projects in the heart of our major cities.

Danny Forster was early in the process of designing the AC Hotel NoMad when Jennifer Lund and Dave Walsh invited him to the Red Hook Terminal in Brooklyn, New York. When the architect arrived at the wharf, the two Marriott executives invited him to walk alongside containers housing rooms for the Pod Hotel, to be loaded onto lorries that would take them to a Manhattan construction site, where they would be slid neatly into the building’s skeletal superstructure. As a modular hotel, Forster wanted the AC Hotel NoMad to undergo the same process. The question was, whether everyone else on the project would agree.

“I’ll put it this way – developers are risk-averse creatures by nature,” says Forster. “Telling a developer three months into a project, ‘I’d like to pause things and radically transform what we’re doing,’ is a big ask.”

Luckily, Lund and Walsh were enthusiastic. When Forster proposed the idea, they saw not only that modular construction had manifest cost advantages, but that the AC Hotel NoMad would serve as a showcase for the method’s application in an urban setting on a much grander scale than anything previously attempted. Without that support from Marriott, Forster knew he would have been laughed out of the developer’s office. “It’s like, ‘Well, there goes my architect again with more nutty ideas,’” says Forster.

The design looks anything but nutty. 25 storeys high, the 100,000ft2 space will be the world’s tallest modular hotel and is set to blend perfectly with the central Manhattan skyline. “We’re currently in a two-front war,” Forster says of the construction process. “We are constructing our foundations in Manhattan as we speak, and we are very far along in manufacturing all 168 of the guest room cages.”

Each of these modules are, as Forster puts it, “in various stages of undress”. The next phase of construction will involve slotting the room cages into the tower’s superstructure, which will be done at night to minimise disruption to city traffic. The overall time that will be spent building the hotel has been estimated at just over 90 days.

“I’ve walked onto God knows how many hotel job sites where you’re still in an active, messy, loud construction site, yet you’re moving all of these finished materials into these guest rooms,” says Forster. “You’re just praying and hoping upon hope that those things don’t get damaged. So, the opportunity to go off-site, to minimise the complexity of the repetition, leverage the homogeneity of the hotel and bring that assembly line logic to a hotel room, seemed like a great opportunity.”

The hotel industry is no stranger to modular construction, least of all the AC Hotel NoMad’s operator, Marriott International. “Our building trades and the way we build things haven’t changed in 150 years,” says Eric Jacobs, Marriott’s chief development officer for select service and extended stay brands in North America. “It’s been one stick, one beam, one nail at a time. So, we started to look at building trends and applications around the world and how we might apply them to our business.”

What Marriott realised, after looking at the way modular construction was employed at a much greater scale in Europe and Asia, was that it could boost the quality and consistency of its properties while affording developers the opportunity to cut down on labour costs by simply assembling all the constituent pieces in a factory. As such, modular construction has been pursued to great success in building hotels at over 30 greenfield sites for brands including Courtyard, Spring Hill, Fairfield and, of course, AC NoMad.

Typically on these projects, wastage of building materials is cut in half, while construction times are significantly reduced thanks to the use of smaller construction crews. “When we look at our pipeline, and our owners who are developing primarily these prototype buildings, anything we can do to help get them from identifying a site to opening and making money is good for our investors,” says Jacobs.

In that sense, Marriott sees itself in the vanguard of operators pushing modular construction. “We believe that the more volume that we create as an industry will see pricing for actual units come down,” Jacobs explains.

Forster’s AC Hotel NoMad, however, was much more ambitious. Commissioned in 2017, the building was in some ways a natural outgrowth from the brand’s urban developments in Oklahoma City and Louisville. These projects were only several storeys, however – the New York property would be significantly taller.

“We love projects like this as a company,” says Jacobs, who saw Forster’s design as an opportunity to showcase what Marriott was really capable of building when it came to modular. “Some of our hard brands get the stereotype that they’re just a 125-room, cookiecutter prototype at every exit in the US, right? And so, we have unique projects like this.”

The AC Hotel NoMad is not quite unique, but it was a risky proposition. BD Hotels, responsible for building New York’s first pod hotel, publicly stated that it would not construct anything at the height of 25 storeys, fearing unforeseeable challenges during construction. The delays experienced during the assembly of citizenM’s Bowery property, meanwhile, illustrated how potentially difficult it was to build a modular hotel at the heart of a major city.

“We managed, in a way, but the first hotel we built in New York? It was impossible,” recalls Rob Wagemans, the property’s architect and founder of design firm Concrete. A veteran in modular design, he remains sceptical that the medium is on the cusp of flourishing in the urban environment.

“In greenfields, not in city centre locations, it’s really the future,” says Wagemans. “And I think Marriott is exploring that quite well. But in city locations, with strong regulations and very stubborn inspectors, it will always be hard.”

The main reason for this is that if city authorities demand modifications to a building after an inspection, they’re much more difficult to undertake in a modular structure than one built using traditional construction methods. Demanding changes to a room long after its manufacture – a room built to the same exacting specifications as all the others in the building – could result in massive cost overruns.

That being said, Wagemans refuses to be entirely negative about the future of modular construction in cities. He has worked on too many similar projects for citizenM to know that the manifest advantages of building in this way on a large scale will eventually see more structures of this type being built in major metropolises.

“More things will be produced off-site, to not congest cities, and will be built faster and more sustainably,” says Wagemans.

Forster, unsurprisingly, believes that modular’s time has come. “When you are working in a greenfield site in an open area, the risk is low; the ability to load the modules adjacent to the properties is easier,” he explains. “But I would say this, though: the opportunity to combat construction and labour costs is less potent when you don’t have that pressure on the project.”

Patently, says Forster, the high cost of land and labour in urban environments, combined with the potential of traffic congestion to snarl up the delivery of building materials on-site, make modular construction methods an obvious choice. “Just think about it,” he says. “My building doesn’t have a series of concrete trucks being brought to the site every single day. We have dramatically less labour on-site.”

This isn’t to say that modular construction doesn’t create problems for developers. “If you think about the percentage of the building that is rooms versus the public space, maybe it’s 80/20,” explains Forster. Putting together the rooms, of course, is – roughly speaking – only 40% of the overall capital investment in a conventionally constructed hotel. Nevertheless, this cost is spread out over the time of construction. The situation is quite different in a modular project.

“Your hands are basically tied at a very early stage in the process, really in the middle of design development,” says Forster. “You haven’t even broken ground yet on your site, but you’ve already given yourself veritable cost certainty on 80% of the real estate and about 40% of your budget.”

For a risk-averse developer – one who doesn’t want to even comprehend the possibility of latestage modifications and the resulting cost slippages – modular might not be for them. Another problem lies in manufacturing capacity. Any modular project will be able to find a factory somewhere to supply their rooms, but they’re usually to be found in Europe and Asia.

“We manufactured this tower in Poland because, at the time, there weren’t a wide range of US-based volumetric steel factories that were doing the work that we were trying to do,” says Forster. “But they are coming.”

If anything, the architect sees the rise of modular construction in the hotel industry as a boon for the US manufacturing sector. “This is an opportunity, especially post-2008 housing crash, where we are able to think about how we bring more efficiency to the trades. How do we bring some technology to construction? And how do we, potentially, manufacture it in the US?”

Furthermore, according to Forster, if the hospitality industry does embrace modular construction methods at sufficient scale, it could have profound consequences across architecture. He remains befuddled that the architectural community hasn’t realised this already.

“I think there’s far more excitement about the idea of 3D printing a house than there is about leveraging modular architecture,” says Forster, frustrating for him since the former is still very much a research and development concept, and not ready for adoption on a mass scale. Whereas modular construction, however unsexy in comparison, is happening now.

“In New York, Pennsylvania, Alabama, Poland, Latvia, China – this stuff is happening today, and in our industry,” says Forster. “It’s not speculative.” 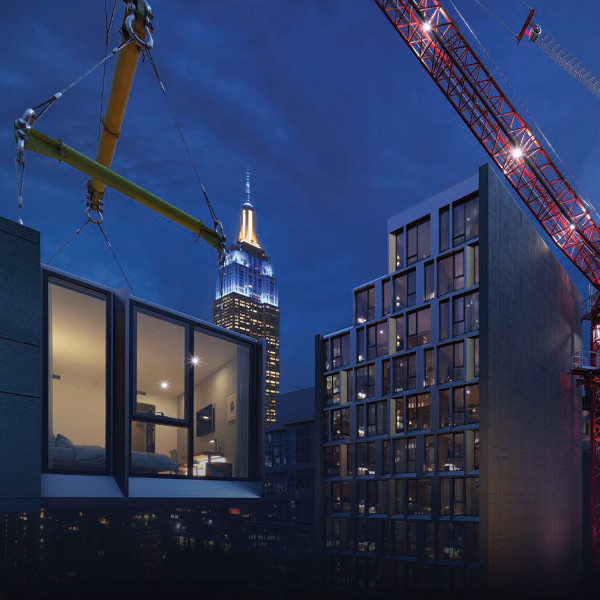 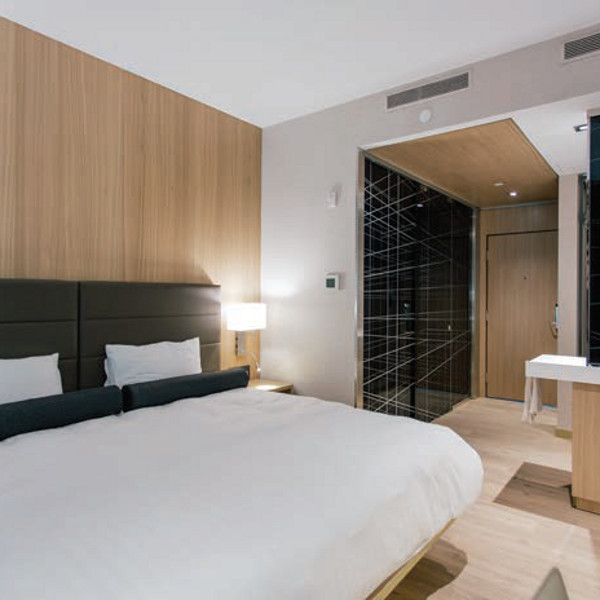 AC Hotel NoMad’s operator, Marriott International, has been at the forefront of modular design. 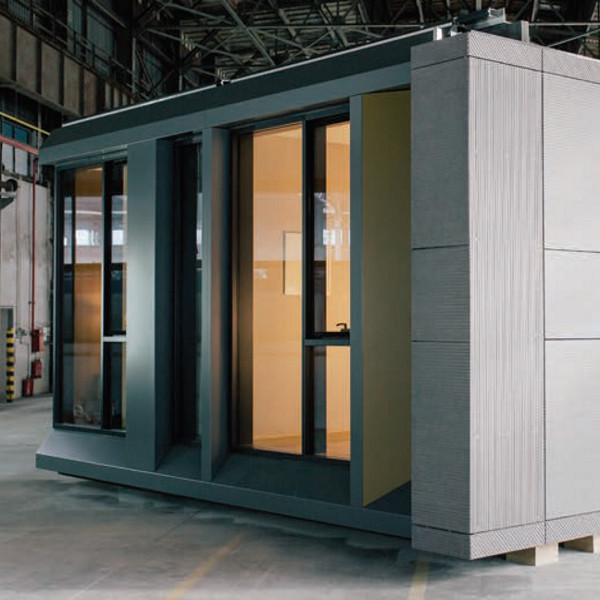 In modular construction, rooms are built off-site, which has the potential to lessen congestion when building in city centres.
Post to: