Europe on the up

After a period of uncertainty earlier in the decade, Europe’s hospitality industry has made steady progress in recent years. Our partners at STR Global share some of the highlights of a profitability overview of the sector.

Although Europe did not recover from the global financial crisis at the same pace as the Asia- Pacific region, there has been consistent performance and profitability growth over the past seven years, with the exception of 2012. December of that year marked Europe’s 77th straight month of growth in RevPAR.

In 2016, Europe’s hotel market saw positive developments across all revenue streams except ‘other operated departmental’. The increase in room revenue (+1.9%) had the most significant impact on the 1.5% boost in total revenues, followed by F&B (+1.4%). One common trend between these two key departments is vast growth in revenues generated from service charges. Other operated departmental revenues decreased due to a downswing in spa demand. The countries experiencing the strongest growths in TRevPAR were Ukraine, Israel, Russia and Spain, while the countries with the steepest declines were Turkey, Belgium and France.

Departmental expenses increased at a slightly higher pace than the total revenue stream as a direct result of higher payroll costs for rooms and F&B. The cost of F&B, however, was well maintained and only increased by 0.4%. 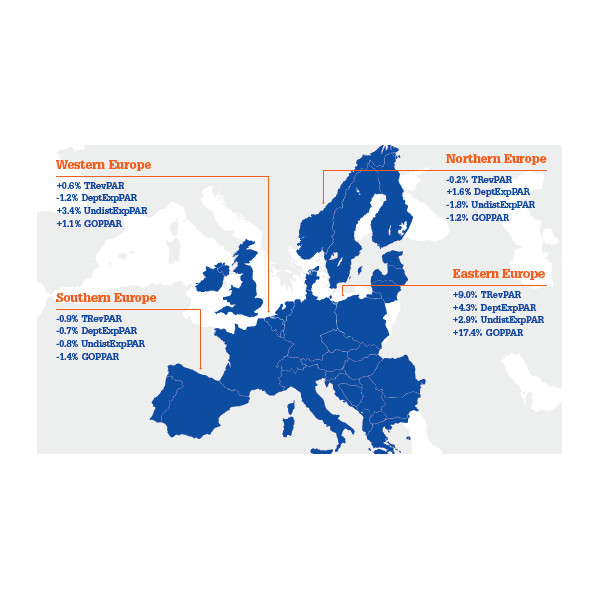