Thanks to all the soft brands and collections launched in the 2010s, independent hoteliers looking to partner with a larger group would seem to be spoilt for choice when it comes to finding the right fit. So why are some brands growing so much faster than others? And what has independence got to do with it? Tim Gunn turns to Philipp Weghmann, European vice-president of Preferred Hotels and Resorts, and Mark James, Marriott International’s director for collections brands in Europe, for answers.

They might be buried beneath all the headlines about market share and profit growth, but everyone knows that mergers have their body counts. Perhaps the most predictable thing about Marriott International’s acquisition of Starwood was ‘the synergies’. Obviously, the latter’s recently launched Tribute Portfolio would be swallowed by the far larger Autograph Collection, which was a wizened six years old at the time. Group CEO Arne Soerensen had assured the world’s media that no brand would be left behind, but how many collections of upscale to upper-upscale semi-independent lifestyle hotels does one company really need?

At least two, as it turns out. Though it had only been launched a year earlier, the Tribute Portfolio was 20 hotels strong at the time of the merger and, contrary to pundits’ expectations, Marriott wasn’t about to give up on that sort of growth. Instead, the world’s largest hotel group embraced the challenge of differentiating the sense of place and compelling storytelling design of Autograph’s ‘upper end of upper-upscale’ properties from Tribute’s ‘upscale to upper-upscale’ promise of characterful, social hotels that bring together guests and locals.

Both collections have essentially doubled in size since the time of the merger but, given their respective starting points, it’s clear Tribute lost out. The brand opened twice as many hotels as expected in its first year, but it’s achieved less than half of the five-year growth Starwood hoped for in 2015, starting 2020 with only 40 of the 100 properties that were originally forecasted. Nominally the more exclusive flag, Autograph began 2020 with 192 open properties and another 100 in the pipeline. Evidently, not every niche is created equal.

For Philipp Weghmann, Preferred Hotels and Resorts’ vice-president for Europe, it’s no surprise that owners seem to prefer sticking to the more established names in the space, despite the fact that would seem to cut against independence. While Preferred, which started in 1968 as a referral organisation and is now the world’s largest independent hotel ‘group’, has repeatedly said that the sudden uptick in competition has helped explain its offering to both hoteliers and holidaymakers, Weghmann also believes that the past decade’s soft brand phenomenon is something of a category confusion. His company, which spans more than 700 properties across the globe, considers itself a ‘true’ soft brand, versus ‘franchise collections’ like Tribute, Autograph, Hilton’s Curio (86 properties) and Hyatt’s Unbound (20). To explain, Weghmann conjures a spectrum with brand-owned-and-operated hotels at the extreme left and fully independent hotels all the way to the right. “I don’t think we should be sitting in the same bucket with the Autographs and the Curios,” he says. “I think flexibility and freedom-wise, we’re further to the right.”

This issue over the term ‘soft brand’ goes to the core of what Weghmann sees as a general contradiction among franchise collections: they still make far harder demands than genuinely independent hotel groups. Weghmann points to their property improvement plans (PIPs), in particular. “From what I’ve heard from dozens of clients who have hotels with harder brands like Autograph or Curio, in most cases, the PIP is still significant,” he continues. “And not all of the things in such PIPs necessarily drive guest satisfaction, guest experience or ROI. A lot of owners of independent hotels like their hotels to be unique and quirky, and when the chains come in and give them a big PIP, maybe some of it makes sense but other items don’t make any sense at all. That becomes a negative compared with a brand like us, where the PIP is a lot softer and we give waivers if a hotel doesn’t want to comply with what are normally our brand standards, because of its concept.”

By way of example, Weghmann points to Yasuragi, a Japanese spa-themed hotel just outside Stockholm, Sweden, which is part of Preferred’s Lifestyle Collection. There, Preferred dropped its requirement for coffee machines in every guest room because it makes far more sense for a relaxed Japanese hotel to focus on providing authentic Japanese teas. “I could give you 20 other standards where we’ve given them exemptions or waivers to make it work,” Weghmann says. “I don’t think you would find the same kind of responsiveness and flexibility with the harder brands.”

That isn’t for want of trying. No matter how precisely they might be drawn, the fine margins between soft brands are tough to translate over the hard borders spanned by global hotel groups. Marriott is currently reintegrating its regional operations in Europe with those in the Middle East and Africa, which means there are a few inconsistencies to deal with, particularly when it comes to Tribute and Autograph. Mark James, the senior director for collections brands in Europe, was recently parachuted into Dubai to begin addressing them.

“Our chief development officer was over there,” James explains, “and he was listening in on a presentation where Autograph and Tribute were being positioned as the same. His jaw kind of hit the floor.” The presentation was interrupted while everyone was alerted to the error and James was soon on his way to start fixing it.

On the technical side, Tributes in Europe are more flexible than Autographs about room specifications, and food and beverage options. That would seem easy enough to replicate across the world, but hotels in the Middle East need to have considerably larger rooms simply to achieve particular star ratings, which are far less consequential a few thousand kilometres north-west. Similarly, whereas James emphasises the success of open-plan combinations of lounge, bar and restaurant at European Tributes, such spaces would only count as a lobby in the UAE, where properties need to offer a traditional three-meal restaurant to even qualify as hotels.

In the Middle East, Tribute has been losing out, not because it’s too ‘hard’, but because its model is so open, although Preferred might contend that requiring hotels to differentiate themselves by being unduly flexible is itself an imposed brand standard. Even so, though the market is certainly evolving, the majority of branded hotels in Arabic countries are still managed rather than franchised, which doesn’t make it a particularly fertile market for groups looking to recruit independent-minded hoteliers.

Having spent most of his working life outside of the hotel industry as an interior designer, James is evidence of the cultural shift that’s yet to take place in the Middle East. Marriott has realised that the skills required to direct a soft brand are different from those of a typical franchise, so its European head of collections is tasked with as much facilitation as direction. “With Le Meridien, Renaissance, Westin and these other lifestyle brands,” James explains, “we give them a design approach, we give them the programming and we expect to see them implement it in the property. But with these ones, it really is about creating their own set of rules, essentially, upon which they base the hotel.”

Indeed, the first requirement for any hotel joining one of Marriott’s collections is that they hire a branding agency. For Luxury Collection properties, which have the most stringent brand standards for facilities and programming, these agencies are tasked with helping hotels identify and demonstrate why they define their destinations. Meanwhile, Autograph and Tribute hotels need to set up what James calls “brand pillars” for their own independent hotel brands, and lay out how design and operational choices will convey a narrative to guests.

“Across all the touchpoints along the guest journey, we break down specifically how the choice of uniforms, the choice of music, the interior decor or whatever else can be representative of the independent brand that they’re creating and help manifest it on the property,” James continues. “When you get very tangible like that and it’s not just a bunch of airy-fairy words, it really helps to bring us back to this core brand concept that we ask the hotel to deliver.”

As it’s an extra expense on top of the PIP, James admits that hotel owners are sometimes reluctant to go through what they might initially see as a “tickbox” branding process. That said, it clearly helps prevent some of the expensive steps in the wrong direction that Weghmann cautions against. Though one recently renovated hotel in Berlin, Germany, only needed a very light PIP to qualify for one of Marriott’s collections, it hit upon such a strong narrative and identity while going through the branding process that the owner decided to delay opening and spend more money on a second renovation that would make the most of all the new elements he felt it could bring to the market.

For James, cases like those validate Marriott’s approach to, in effect, asking soft branded hotels to earn their independence. Since 2018, he’s also overseen a programme of experiential assessments for auditing hotels based on their own sets of brand rules, which has helped tie identity to operations. “As I say to the hotels,” he adds, “you have to be able to deliver on this year after year as an open hotel. You’re a part of Marriott with a long contract, and we need to be sure that you’re going to be able to own this and feel you have authorship when we move away.”

On the other side, Weghmann stresses that, as a nimble, relatively small and flat-structured familyowned company, Preferred has far more in common with independent hotels than its competitors, which is reflected in everything from its shorter, cheaper contracts (typically five years compared with Marriott’s 10) to the freedom it offers hoteliers to mix and match systems and service providers (CRS excluded). But while Preferred’s collections don’t have to be as definitive as Marriott’s, they aren’t backed by any programme as powerful as Bonvoy either – a benefit that James says typically accounts for around 50% of business for Marriott’s soft brands, bringing in higher-spending, longerstaying guests at less cost.

Weghmann is more concerned by the advantages companies like Marriott have in negotiating OTA commissions than their loyalty schemes, which he believes bring less value in the luxury space. Nevertheless, his company hasn’t just sat back and watched others encroach on its market. Its ‘I Prefer’ rewards platform is now provided courtesy of a large investment in Epsilon, a long-standing Marriott marketing partner.

Tribute Portfolio properties, up  from 20 at the time of the MarriottStarwood merger. 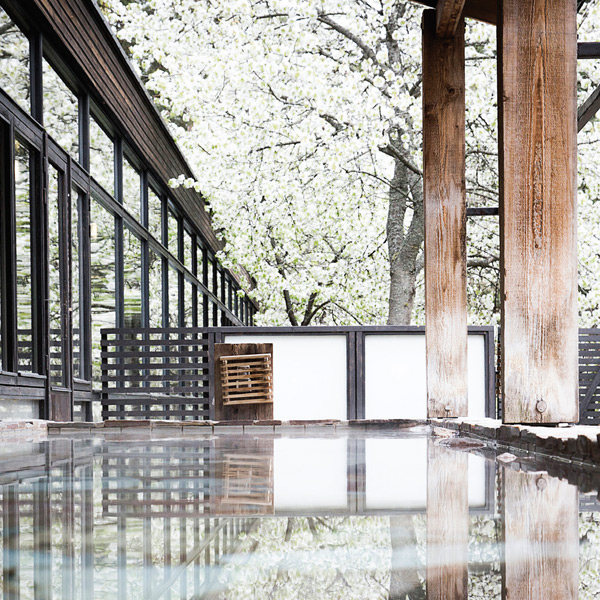 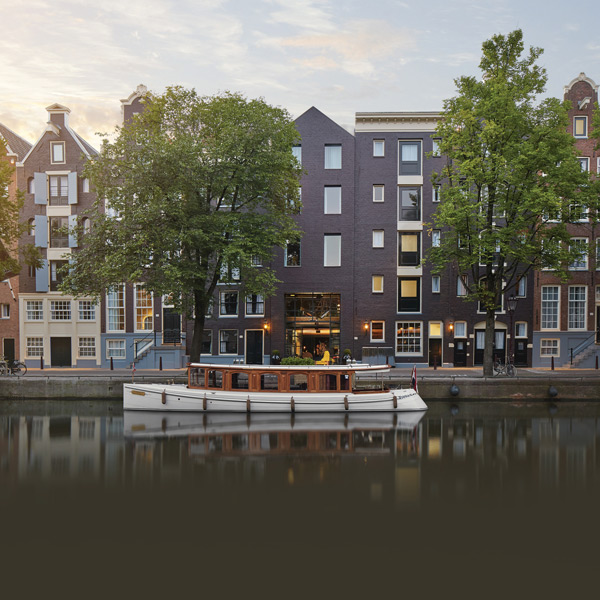 Outside view of the Pulitzer, Amsterdam – previously part Starwood’s Luxury Collection until it joined Preferred Hotels and Resorts in 2015. 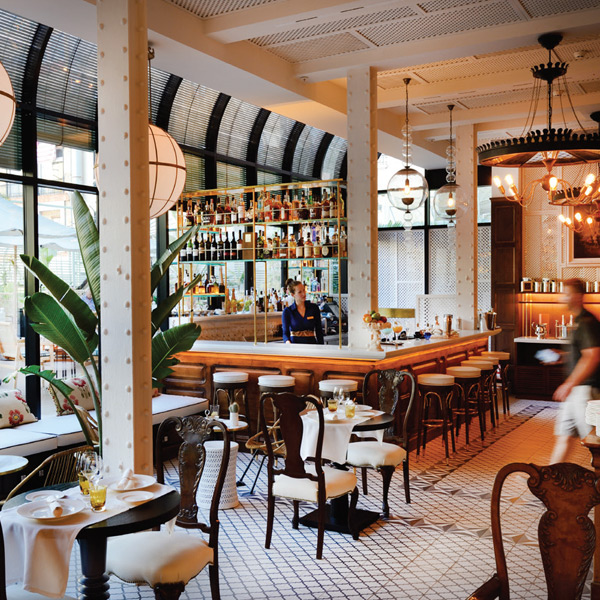