The traditional hotel lobby is giving way to open social spaces with close local ties. While some hotels have swapped check-in desks for apps and tablets, others are changing strategy to provide a deeper human connection. Eleanor Wilson talks to Anne Golden of Morgans Hotel Group, Ennismore’s Timothy Griffin and Daniel Welborn of The Gettys Group about the importance of cultivating local connections, and what goes into the effort to draw guests out of their rooms.

Once, a hotel lobby was an efficient but impersonal place. Centred on the concierge desk, it was somewhere you stopped by out of necessity, on your way to someplace else. It certainly wasn’t a place where you’d feel inclined to order a latte and settle in with your laptop – but that’s what you’ll find people doing right now, in the lobbies of brands like Morgans, CitizenM, The Hoxton and Ace Hotels.

The new lobby is more like a living room: casual, comfortable and authentically grounded in its environment. It’s centred on relaxation rather than the check-in process, with some brands doing away with the check-in desk entirely. Hotels are opening outwards and breaking down the barriers between staff, guests and destination.

For Timothy Griffin, North America director at Ennismore, the driving force behind the social lobby trend is a search for authenticity. Ennismore’s hip Hoxton brand – of which Griffin was brand director, as well as general manager of its Shoreditch property – is well known in its home city of London for buzzy lobby spaces that are popular with locals as bars, cafes and laptop lounges. The Hoxton Williamsburg is set to open in New York City next year.

“People are looking for hotel experiences that are honest and easy, and, increasingly, for an experience that does what it says on the tin,” he says.

Boutique operator Morgans Hotel Group was one of the pioneers of the public hangout space. Its St Martins Lane property was billed as London’s first New York-style boutique hotel when it opened in 2000, hosting parties in a stylish and inviting lobby space.

“I think it’s a step in the right direction,” says Anne Golden, Morgans’ regional vice-president of operations and development for the UK, who was previously general manager for the Mondrian London as well as St Martins Lane. “I look back to walking into beautiful hotels in the past and you didn’t feel like you belonged or that you had the right to be there. Having a social space takes that away; it just feels great when you walk in.”

Daniel Welborn is a principal at global hospitality design firm The Gettys Group, which has been working since 2014 with Hotel RL, a luxury brand owned by Red Lion Hotels that targets millennials and “urban adventurers”. Leader of the group’s Design Americas team in Chicago and Miami, his background is in architecture and interior design. Welborn believes the lobby trend is about comfort and connecting more deeply with destinations.

“Airbnb is a peripheral part of that. People want a ‘home away from home’, and it’s really pressuring hotels because they can get you deeper into the neighbourhood where hotels are not,” he says.

“What people are looking for is not a mural by the front desk with a skyline of the city they’re in - that’s not really local enough,” he continues. “It’s more about curated local offerings within the hotel or the retail experience: restaurants that are run by local chefs, or a coffee shop where people engage with the local coffee.”

Attracting residents through the doors and featuring local vendors is important for creating the sense that a property is an organic part of the neighbourhood scene. To do that, a brand and its designers need to be dedicated to finding out what makes a location tick.

“You have to have boots on the ground,” Welborn says. “You’ve got to really dig in and understand what local truly means. And I think it comes with social responsibility, tying into both what your guest cares about and then what your local community cares about.”

The Gettys Group’s work with Hotel RL has resulted in the Project Wake Up Call initiative, which opens each new property with a photography exhibition of its city’s homeless community.

“Those are the kind of things that can really drive home who your targeted guest is, what your brand is about and how you’re out in the community. That’s powerful,” says Welborn.

Golden agrees that this local grounding comes with responsibilities. “Hotels should be seen as an amenity for the local residents,” she says. “It’s important that you reach out. You shouldn’t be a stand alone; those days are gone.”

To present itself as a community resource, a lobby needs to de-emphasise the fact that it’s part of a hotel. It becomes a workspace, cafe, lounge, and perhaps a bar or performance space, all rolled into one – such as Hotel RL’s Living Stage, which hosts live performances by local artists. The Gettys Group’s work focuses on creating a sense of connection with the local area.

“Art is one of the biggest places where we put local into our designs,” says Welborn. “We use it as a way of talking about the story of the neighbourhood.”

More concretely, design elements are concentrated on drawing people in and encouraging them to stay. “Lighting is critical because it sets the scene, and it needs to change throughout the day. There’s got to be sofas where you can curl up – really comfortable, well thought-out pieces of furniture with a mix of heights,” says Griffin. “Then it’s putting electrical points in the right places, and being very aware of table heights: are you using that space to eat or are you reading or are you working on your laptop?”

Designed for solo activities as well as socialising, a lobby hangout space can be refreshingly inviting for single travellers. Guests travelling alone, particularly women, are a group that habitually avoids public spaces.

“It’s such an important part of what we do, making sure that everybody feels comfortable in our spaces,” says Golden. “We created an area with some high tables and banquette seating so that single and female travellers feel as if they’re part of the action but they don’t feel conspicuous – which is what will inevitably keep people in bedrooms. And then they end up chatting in a safe environment. It’s right in the front and it’s full every night.”

However, there’s no getting away from the fact that the major difference between a lobby and a living room is the concierge desk. Its prominence in the design of the space can change the way a lobby feels, but the immediate needs of guests cannot be forgotten. A number of brands have gotten rid of the concierge desk entirely in favour of self check-in terminals. The idea is gaining popularity with on-trend brands aimed at young, urban travellers who are likely to be digital natives.

“At The Hoxton, we don’t have a concierge as we understand our guests like to chat to our team, who most likely live locally and know what’s going on in the neighbourhood,” says Griffin. “Today’s modern traveller likes to get advice from a number of sources, and that can include recommendations from friends on social media or any person at the front desk.”

Millennial travellers especially have gained a reputation for being averse to traditional customer service. Independent and gadget-savvy, they seem not to need a staff member at their elbow to shepherd them through their stay. But the tablet or terminal seems unlikely to completely usurp the human element of the concierge desk.

“You’re never going to truly pull hospitality out of hotels,” says Welborn. “If guests can’t get what they’re looking for on their device, and then they also can’t find somebody to talk to, you’re going to have a disgruntled guest.”

Golden believes that while self check-in has potential, it’s not for everyone. “People want more of a personal touch in most things now than they did, because everything is so technology driven. You should be offering different levels of service,” she explains. “Leisure guests want to spend more time with the concierge, but if I’m a businessman and I’m used to the hotel environment, I might just want to have all that information on my phone and go straight to my room. Even more traditional hotels will have to offer that flexibility.”

The demand for honesty that has driven the push for local connections is also behind a broader move, across industries, toward a more informal experience. Memorable service is now about creating an environment where clients feel like they’re truly connecting with another human being, instead of feeling bound by old-fashioned, rigid definitions of customer and employee.

“People do still want service, but not the way that our parents or grandparents had, that civility where you were opening doors and dragging cases along. We’ll do things like send handwritten notes up to their rooms welcoming people, and they just love it,” says Golden.

While luxury brands learn to let their hair down, the other end of the market is also seeing the beginnings of change.

“We’re now starting to see select service brands start to allow more customisation, to create more of a local flavour,” says Welborn. “And it tends to drive higher rates, because people are getting not only a budget stay, they’re also getting some of that authenticity. So it’s a win-win.”

Hilton Garden Inn’s 2013 Flourish rebranding initiative began by redesigning the old lobby concept to create a more open, welcoming space that offered food and beverages. At the same time InterContinental Hotels Group launched its Open Lobby concept in London, incorporating aspects of local neighbourhoods, workspace facilities and all-day dining. It was a sign that social spaces were more than a hipster fad: they had a wide market appeal.

With the trend spreading industry-wide, diversification is on the horizon. Golden is a firm believer in the future of the lobby as a casual office for the expanding gig economy. “We’re going to continue to see huge growth in using lobbies for workspaces, potentially offering shared office environments or collaborating with dedicated workspace companies. The local community is definitely going to become even more part of the fabric of hotels, offering more benefits to the local and not just the guests,” she says.

Welborn is looking forward to an explosion of different interpretations. “You’re going to see a range of things, from a restful lobby to a super-active lobby like W Hotel or Virgin, up to hotels that have no lobby at all,” he says. “There’s going to be a lot of flavours of what the lobby experience is, based on a very targeted understanding of who the guest that they’re trying to attract is.”

It’s a story of equal and opposite reactions. From massive globalisation comes a craving to feel grounded. Technology makes travellers independent, and so a new and personal kind of hospitality arises. Luxury may reach ever more dizzying heights of sophistication, but as it turns out, people simply want to feel like they are among friends. 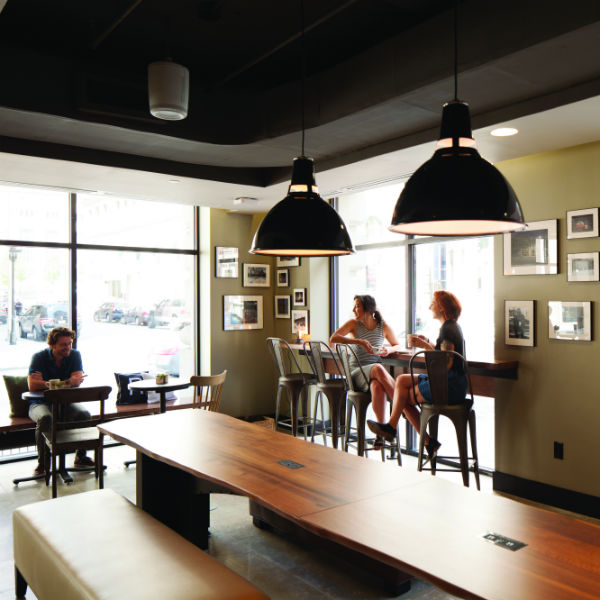 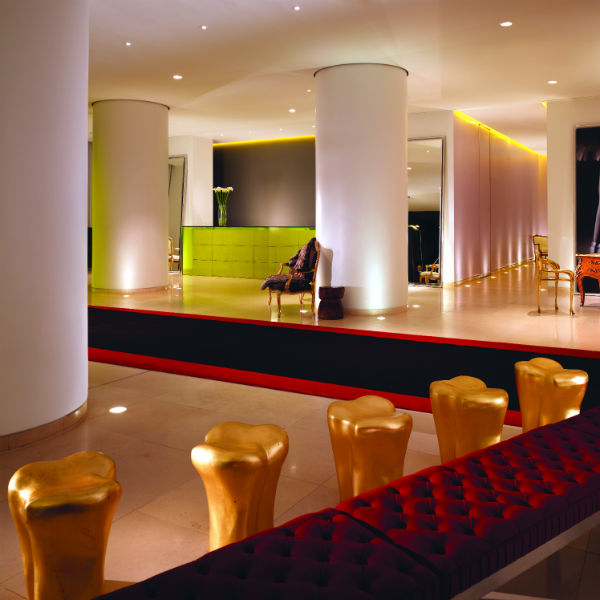 The stylish lobby of St Martins Lane Hotel in London is a sleek, open social space, a design feature for which guests are showing a growing preference.
Post to: