Newly acquired by Nasdaq-listed Huazhu Group, the world’s fifth-largest public hotel company, Deutsche Hospitality, is beginning a period of growth. CEO Thomas Willms had introduced two new brands in his two years in charge already, and is now celebrating both his company’s 90th anniversary and overseeing its most significant development yet. He tells Isabel Ellis how it came together and just what it means.

On the second day of 2020, Huazhu group completed its purchase of Deutsche Hospitality. Within 24 hours, illustrious grande dames across Germany, Austria, Switzerland and Belgium were available for 140 million Huazhu members to book on their apps for the very first time. By 5 January 2020, Deutsche Hospitality CEO Thomas Willms was in Shanghai for a strategy meeting.

“They like to say they want European tradition, German heritage and perfection, and Asian speed and innovation,” he says. “And they’re fast, very fast.” In the 15 years since its founding, Huazhu has grown to encompass over 6,000 hotels, so it’s not exactly surprising that its property management system could absorb another 150, while the rest of the world wakes up from the holidays. But Deutsche Hospitality means much more to the Chinese giants than a few thousand extra rooms. The purchase brings Huazhu’s systems to Europe and European luxury to Huazhu.

“They started in China,” explains Willms, “but they have a global vision. I think that’s where we complement each other. They are strong in the economy market, but not luxury yet. That’s what they can learn from us. They need our brands. Instead of developing their own, they can take our historical and traditionally European brands and bring them over.”

As a result, Deutsche Hospitality’s 2019 projection that its global portfolio would grow to 250 hotels by the mid-2020s was out of date before the decade had properly started. The plan now is to reach 500 by 2026, with 50% of the new properties opening in Asia. There’s plenty of scope for growth in Europe, too.

“We don’t have hotels yet in the UK, nor in France or Italy,” says Willms. “In Spain we only have one hotel and Eastern Europe is a big, growing market. The Chinese are going to all these places, so they need booking capabilities and opportunities. And so, development is big. The Chinese brands will not be taking over here. We will keep our five brands, but we will bring four of our brands to China and Asia. The outlook is very promising.”

It’s a bit of a quirk of the calendar that what looks to be Deutsche Hospitality’s most significant period of growth, began one day after its 90th year of operation, but it’s instructive all the same. One thing couldn’t happen without the other. Since 1930, the company formerly known as Steigenberger, has done as much as any other to define European luxury hospitality. It’s the same expertise that attracted its previous Egyptian owners to purchase it from the Steigenberger family in 2009 and invest in expansion in the Middle East.

Since then, the Steigenberger and Intercity brands have been joined by the young, design-focused Jaz in the City, the upscale MAXX by Steigenberger and the Danish economy brand Zleep, which was acquired in 2019 and has an “excellent pipeline in Europe”.

Zleep won’t be expanding into areas where Huazhu already operates its own economy brands, but it’s set to benefit immensely from the Chinese group’s expertise in the segment. It’s almost like Deutsche Hospitality planned it that way. Indeed, since 2018, Willms, CFO Matthias Heck and the rest of the board have been positioning the group in preparation for the next level of its expansion. “Against the big boys in Asia, we were not really successful,” Willms admits. “So, we needed to talk about the next level more internationally and the shareholders decided to see what’s out there.”

That meant Willms and his team had to do a lot of “homework” in order to attract the best deal for the group’s future. “We didn’t know who would actually be our new partner, but we had to lay the base,” he explains. “So, over the past two years, we invested a lot in our CRM, because before you start loyalty you need to be sure you know your customer, you need to combine the system data and guest histories to understand their preferences. That we have; what we didn’t have was the system, the backbone. That would have been expensive to build on our own.”

Of course, Deutsche Hospitality could still have done so. Or it could have been acquired by a larger local player. Either route would have created redundancies that limited the group’s growth prospects and freedom of manoeuvre. By contrast, merging with a Chinese company with a huge base of Asian travellers has given Deutsche Hospitality the best of both worlds.

“Now we can plug and play into the Huazhu system,” says Willms. “For us the direct booking capability and the loyalty system is the biggest gain. If you think about it, there are more than 1.4 billion people in China, and only 10% are travelling abroad at the moment. That shows the potential and the spectrum goes from the super-rich looking for the best to tour groups travelling through Vienna, Munich, Paris and London. It’s a very young nation, hungry to travel and loving brands.”

For all of that, the most important thing about Chinese travellers are their phones. “Everything is mobile over there,” Willms says. “They don’t look at the street or at traffic: they look at their phones. Everything is WeChat and mobile pay, so to be on those platforms is key.” Huazhu saw this early, focusing on using IT and scalable processes to power its growth into guests’ pockets and their itineraries. “I think this is key to that market and the way they book,” Willms adds. “It’s direct business, not OTA business.” Huazhu, which gets more than 80% of its business through its own direct platforms, knows the difference better than anyone. Six years before launching the hotel group, CEO Qi Ji was actually a co-founder of Trip.com Group (formerly CTrip), China’s biggest travel agency.

That career move says everything about the power of a good loyalty programme and H Rewards (as Huazhu’s is called) is poised to bring its world-leading service to a whole new audience of European guests.

There are other advantages to the arrangement too, such as procurement. “So many things are produced in China,” he says, “and now we can buy them directly. If you think about mattresses: we’re buying 50,000 and they’re buying a million. There are so many opportunities. It’s on the HR front, it’s on the booking front, it’s in loyalty, CRM, procurement and more.”

More than one reason to celebrate

In his two years as Deutsche Hospitality’s CEO, Willms has overseen more change than anyone else in the company’s history. For Huazhu though, it’s as much his and Deutsche Hospitality’s commitment to what stays the same in hospitality that makes it such a valuable asset. Last year, Willms presided over the €120 million ‘Evolution Steigenberger’ upgrade programme to make the group’s flagship brand globally relevant for new generations and when he flew to Shanghai in January, it was time for him to share the lessons of close to a century of luxury service.

“The price point in economy is key, the process is key, and so are cost management and efficiency,” he explains. “But in luxury, it’s all about the experience. It’s about people, it’s food and beverages, it’s the welcome, the smile and the vow to the guest.”

Any single sentence distillation of what it means to welcome someone will prove inadequate, but Willms’ emphasis on the value of people alongside price and process helps explain why this deal made sense.

“This is a nice story because it’s a growth story,” he says. “It’s not a threatening, angsty story, not: ‘Will I keep my job?’ and ‘What’s in it for me?’” In fact, the different regional focuses of Huazhu and Deutsche Hospitality means that, even in the corporate offices, there won’t be any cuts. “It’s more, ‘How can I grow personally now we’re more international, now we’re a more global company and part of 6,000 hotels?’ So, everyone’s excited.” There’s only one 90th anniversary, but 2020 has brought Deutsche Hospitality plenty of reasons to celebrate

Percentage of business Huazhu gets through its own direct platforms.
Huazhu 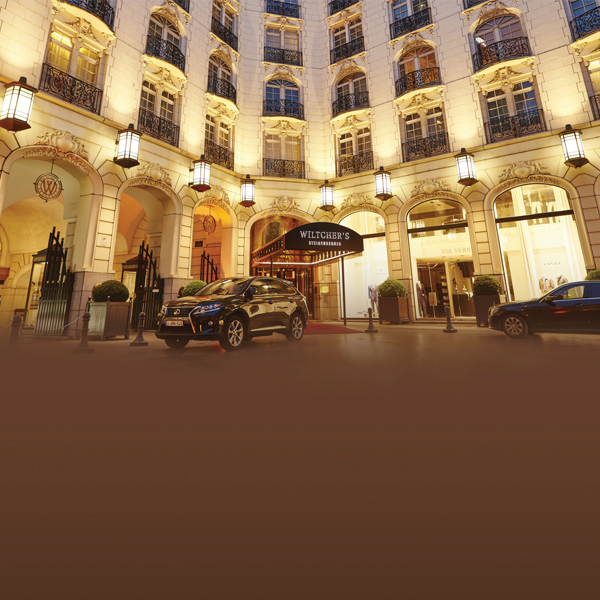 The entrance to Steigenberger Wiltcher’s in Brussels, one of Deutsche Hospitality’s hotels.
Post to: