While the Middle East posted mixed results for Q1, Africa posted growth in occupancy, average daily rate and revenue per available room. Nevertheless, the former continues to attract significant interest from the world’s largest operators and brands, as demonstrated by STR’s release of the top 50 companies and brands in the region, unveiled at this year’s Arabian Hotel Investment Conference as part of the STR 500. Our partners at the industry leader in hospitality analytics look at some of the stories behind the numbers.

When compared with Q1 2018 data, hotels in the Middle East experienced a slight increase in occupancy (0.9%). The region posted an 8.8% decline in average daily rate (ADR), which resulted in a 7.9% drop in revenue per available room (RevPAR). Africa, on the other hand, registered increases in each of the three key performance metrics – occupancy (1.2%), ADR (2.2%) and RevPAR (3.5%).

At the market level, Manama, Bahrain, experienced its first Q1 RevPAR increase since 2014, when reported in local currency. Demand (up 15.1%) outpaced supply (up 2.3%), which provided a performance boost. STR analysts pointed out that hosting the F1 played a part in March becoming the standout month of the quarter, with a 17.4% rise in occupancy and a 5.5% lift in ADR. Those increases resulted in a 23.8% jump in RevPAR in the market.

Cairo and Giza saw a 6.8% increase in occupancy for the quarter, thanks to a 13.6% lift in group occupancy. STR analysts note increased stability and government campaigns to boost tourism have aided hotel performance recovery in Egypt, with further efforts planned to attract visitors from Asia and Latin America.

“Supply remains a hot topic in the Middle East when looking at the recent impact on performance, as well as how much new inventory continues to be developed as part of ‘mega events’ and economic initiatives,” says Philip Wooller, STR’s area director for the Middle East and Africa. “The growing presence of so many major global companies and brands speaks to the importance of the Middle East as developers identify growth opportunities in this sector of real estate. The region will certainly be key on the global development landscape for years to come.” 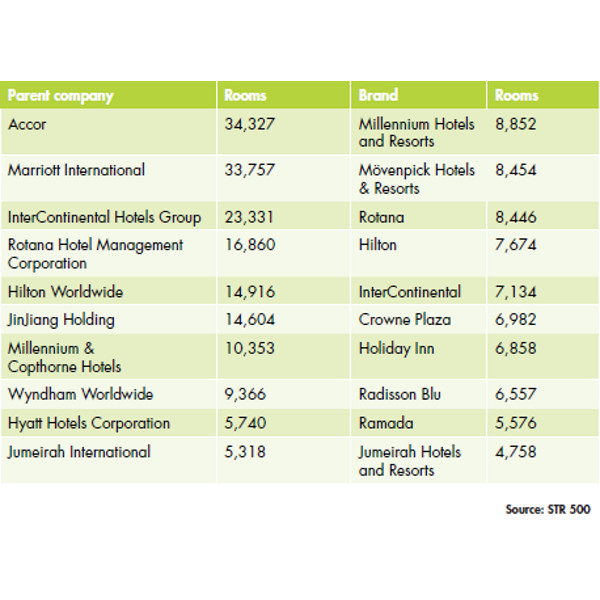 Top 10 companies and brands in the Middle East ranked by room count.
Post to: