For hotels across the globe, the arrival of vaccine programmes has sparked welcome signs of recovery. While some have been happy to see guests return and finances reboot, others have continued to expand at a frenetic pace even as the pandemic remains far from over. Will Moffitt speaks to Elie Younes, executive vice-president and global chief development officer at Radisson Hotel Group, about proactive leadership, how the company has fared over an immensely challenging year and a half, the areas it is targeting for long-term growth, and the threat new Covid variants pose to hospitality.

Elie Younes talks about overcoming obstacles like a priest talking about original sin. The pandemic, he says, was a “moment of adversity” and “adversity always has two facets: there’s the devil, and there’s the angel”.

Of course, Radisson Hotel Groups’ global chief development officer is not here to lecture anyone on dogma. Instead, he is talking about how perception shapes action, how the way we see things influences our behaviour. As the pandemic rumbles on, splitting things into Manichean terms feels somewhat logical.

On the one hand it’s easy to fret. After vaccination campaigns helped loosen social boundaries, hotels around the world enjoyed a welcome burst of renewed activity.

The return of the Omicron variant, however, looks to pose a significant threat to vast portions of the globe, just as many hotels and businesses were beginning to get their mojo back. Quite how deadly this strain of the Sars-Cov2 virus might be, and what restrictions might be required, is still – at the time of writing – largely unknown.

There is a more optimistic interpretation of events, however. While national infrastructures around vaccinations and test and tracing systems might differ across countries, there is no denying that most nations are better at containing the virus than they were in March 2020. The same can be said of hotels, where a raft of safety protocols and more advanced testing measures are in place to stem unwanted infections. Moreover, while estimates suggest that RevPAR will not return to pre-pandemic levels until 2023, staycation and working trends have revitalised economic downturns.

For Younes, it is all a matter of perspective. “There will be a mix of news cycles, some good, some not great in the next 12 to 24 months, but I choose to believe that the good will always prevail over the bad,” he says. “We have maintained the same view that we have had for the last six to 12 months. We are prudently optimistic. We choose to believe that the future of our company and the industry most importantly, is quite positive.”

A yearning for bespoke hospitality

A cursory glance at Radisson Hotel Group’s figures gives credence to Younes’s cautious but optimistic outlook. Last year the group made 40 signings, an impressive haul in any year let alone one reeling from the impact of a global pandemic – and the economic depression that ensued. So far, in Q3, RHG has made 50 hotel signings and nearly 30 openings to date, with notable expansion in Morocco – where seven new hotels have been signed, four of which opened this summer – Saudi Arabia and Russia.

The group has also enjoyed sustained growth across the Asia Pacific region (APAC). Alongside India, where it has fostered an expansive, nationwide presence, China remains a significant asset. Bolstered by the support from international Chinese shareholder Jin Jiang, Radisson Hotel Group is intent on delivering 800 hotels in the APAC region in five years. Most of these are in China.

Younes refuses to take credit for any of it. “This is the fruit of great people in the company,” he says, “not just in my team, but across the company, and our shareholders. Their commitment to continue the growth journey of the company.”

Speaking of his own leadership style, he argues that clarity and empowerment above anything else are the one quality he strives for. “When it comes to interacting with your teams, there is an increasing need for very clear communication,” he says. “Which becomes key during periods [of adversity] and you also have to have trust. Trust in your people and trust in yourself.”

The creation of a new brand, Radisson Individuals, has only enhanced the group’s appeal, bringing stylish hotels into the group’s portfolio while allowing them to keep their unique sense of place and personality. With 20 properties firmly established a year since it was launched, the concept has been a resounding success.

After the launch of a flagship property in Bath, UK, the brand has signed hotels in places as diverse as Estonia, India, Serbia and Scotland. More recently, it has debuted in Italy, with the opening of two properties in Sicily and Piedmont, while Anda Hotel Athens will see Greece enter the fray.

Russia continues to be a major focal point for RHG where it is the leading international operator with 47 hotels and 12,220 rooms in operation and development. This monopoly has only been strengthened through an agreement signed between RHG and Cosmos Hotel Group (part of the AFK Sistema company), which will see seven existing hotels join the Radisson Individuals brand, with another four set to open by 2025.

The Kingdom of Saudi, on the hand, represents something of an untapped resource with the state barring tourist visas until 2019. As the country seeks to diversify its reliance away from oil reserves that are drying up, it has been working double-time to enhance its hospitality portfolio. Like other large hotel groups, RHG has jumped at the chance to build its presence in region, doubling its offerings in Makkah (Mecca) by adding nearly 1,000 rooms and serviced apartments in Thakher City.

“When it comes to interacting with your teams, there is an increasing need for very clear communication, which becomes key during periods [of adversity] and you also have to have trust. Trust in your people and trust in yourself.”

The number of hotel signings that RHG has made as well as nearly 30 openings to date, with notable expansion in Morocco, Saudi Arabia and Russia.

While it represents an enticing business opportunity on account of its wealth, heritage, and picturesque landscapes, questions still swirl around the countries conservative attitudes. Not least the intentions of its ruler Mohammed bin Salman, who has been accused of trying to purify Saudi Arabia’s image through sportswashing and foreign investment schemes.

Having spent considerable time in the Middle East, Dubai in particular, Younes more than understands these concerns, but sees the kingdom as a work in progress rather than a readymade hospitality package.

“I think we as people living in the West take for granted the social liberties that we have here. Saudi Arabia will take time to get there,” he says. “Having said that, it is on the track. The level of conservatism has significantly adjusted over the last three to five years. I mean, it’s basic stuff, you couldn’t have movie theatres in Saudi Arabia ten years ago and women couldn’t drive there.”

“I think we as people living in the West take for granted the social liberties that we have here. Saudi Arabia will take time.”

RHG aims to reduce its carbon and water footprint by this percentage by 2025.

With its ambitious focus on sustainable tourism, Saudi Arabia is developing several major ecological tourism projects, including an outlandish Red Sea Project comprising an archipelago of 90 islands, mountains, sand dunes and dormant volcanoes with guests ferried around via a transport infrastructure powered by renewable energy. The project chimes with Radisson Hotel Group’s eco-focused initiatives. Indeed, RHG has been vocal about its mission to reduce its carbon and water footprint by 30% by 2025. To do so RHG is increasing the number of green hotels in its portfolio with recent additions like Radisson Collection Hotel, Magdalena Plaza Sevilla, which is Spain’s first LEED (Leadership in Energy and Environmental Design) Hospitality Gold certified hotel.

“It starts with us,” Younes says, gesticulating towards me. “Then as a company, we have to be mindful as well, because guests will hold us responsible. We are becoming increasingly mindful that your sustainability [credentials] and carbon footprint are going to become something that will go on social media, and the guests will eventually choose whether they want to stay with you based on that.” That is all well and good, but hasn’t the climate agenda only reinforced an urge to build more eco-resorts and appeal to guests’ instincts to enhance the bottom line?

“This is not the way to create competitive advantage in my view, or try to be smart to incubate an extra dollar in the business,” Younes responds. “I get it that we all want to make money in this specific area, but must try to reduce the selfishness, to work as a coalition as an industry to try and address that.”

To progress sustainability initiatives further, Radisson Hotel Group has been working in collaboration with the World Travel & Tourism Council, the Sustainable Hospitality Alliance and leading hotel companies to develop an industry framework of goals and best practices to ensure all hotels work towards the Cop21 Paris Agreement – the basic sustainability framework.

“Getting to net zero by 2050 seems very far away. But every long journey starts with the first step,” Younes says. “We need to start these steps today.” As for the future of hospitality, it doesn’t come as much of a surprise that Younes remains defiantly upbeat, despite unprecedented challenges. “Eventually this virus has to go, and people will want to travel, and travel will come back with a vengeance,” he says with a smile. “And we’ve seen it this summer, as soon as things opened up, our hotels were packed with people who were willing to pay more than before, so this will happen and it will happen again.” Make no mistake, in this moment of adversity, Elie Younes – and Radisson Hotel Group – are sitting on the side of angels. 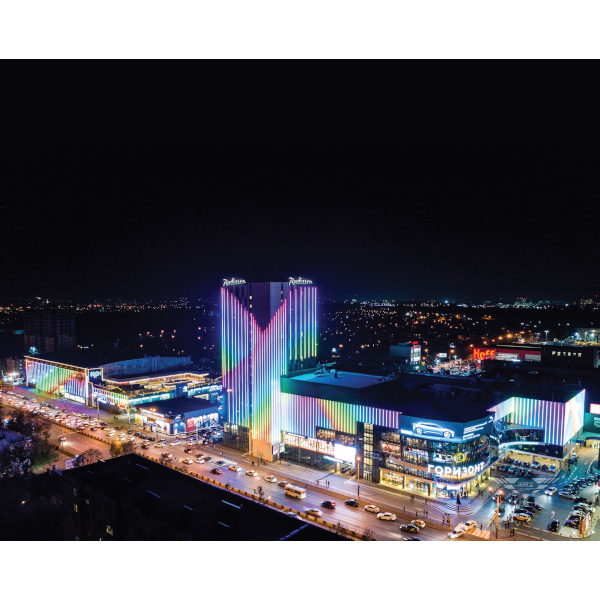 The Radisson Hotel Gorizont in the district of Rostov-on-Don in Russia. 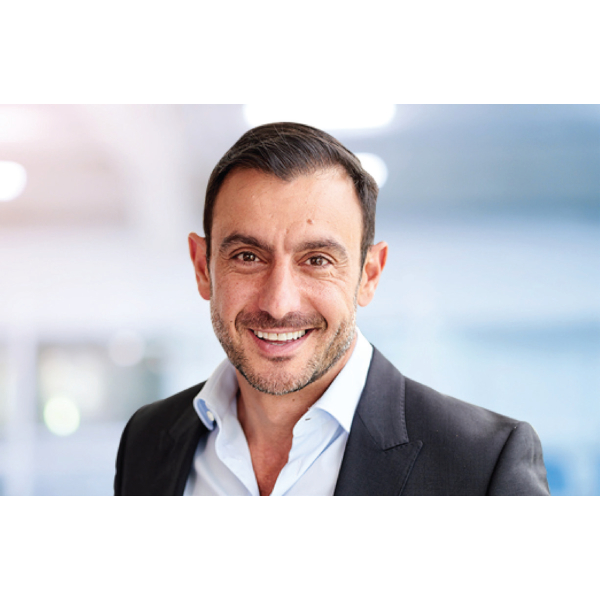 Elie Younes (pictured) brings an unwaveringly optimistic perspective to his role at the Radisson Hotel Group. 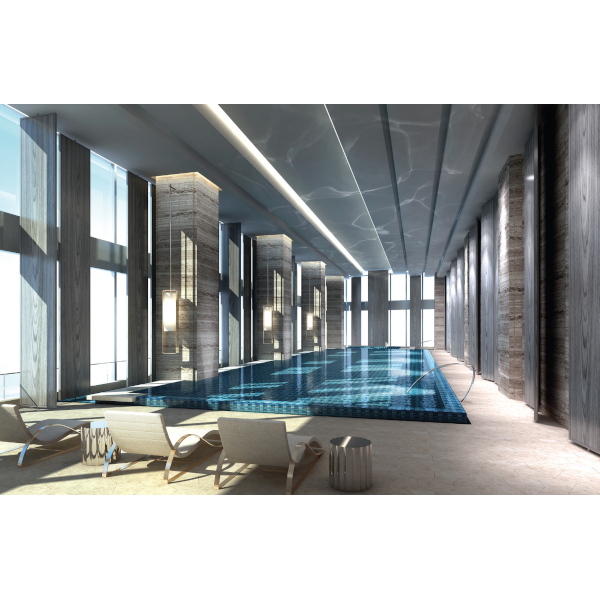 The Radisson Collection Hotel, Wuxi recently opened in the Xishan District of Eastern China.
Post to: