A hospitality hub for the future

In April, operators from across the MENA region gathered at the Arabian Hotel Investment Conference to discuss how best to synchronise for success. Hotel Management International looks back on those three days and the topics discussed, deals signed and challenges anticipated by regional stakeholders.

Expectation among attendees was high for this year’s Arabian Hotel Investment Conference (AHIC). Held in the airy halls of the Waldorf Astoria in Ras Al Khaimah, UAE, on 9–11 April, AHIC would feature up to 66 corporate sponsors and partners – including Accor, Hilton and the Radisson Hotel Group – as well as 137 speakers, watched by over 850 hotel investment decision-makers all eager to know how best they could be ‘Synchronised for Success’, this years’ conference theme.

“We look forward to welcoming the region’s most senior hotel investors, developers, operators and world-class speakers to share insights, and exchange knowledge and opportunities that will drive the tourism and hospitality sector forward,” said Haitham Mattar, CEO of the emirate’s tourism development authority, in anticipation of the conference’s proceedings.

Visitors were not disappointed. With the conference’s main focus being the ongoing tension in the owner-operator relationship, guests were treated to their own ‘Day of Disruption’, with a keynote address given by Sebastien Bazin. What is needed above all, claimed Accor’s chief executive, is for regional operators to move from delivering a product-centric offering for guests towards a client-centric one.

This assessment was echoed by Maria de la Fuente Corrales, a travel industry analyst at Google and one of a number of speakers invited to AHIC from related industries. Above all, de la Fuente argued for a simple and seamless digital experience for guests during the booking process.

“When it comes to mobile, if your site takes more than three seconds to load, more than 50% of people will just leave,” she said. “They will not wait for the site to load. You are missing more than 50% of your traffic to your website because you have not optimised your site.”

The answer, concluded de la Fuente, was for delegates to consider moving from simply gleaning answers about customers from their data to anticipating their needs. One might imagine this will be essential in understanding how to approach catering for the growing millennial market, two thirds of who book hotel rooms using their smartphones, according to PwC analyst Chinmay Shukla.

“If there is one segment that needs to be targeted, it’s millennials,” said Shukla. “Based on studies for the next 15 years – so, 2020–35 – millennials will be at peak spending power.”

A time for recognition of those making an impact

Delegates were also treated to a celebration of the region’s best and brightest during the annual AHIC Creating Impact Awards. Winners included the event’s host, His Highness Sheikh Saud bin Saqr Al Qasimi, who received the competition’s Outstanding Leadership Award, and Sharihan Al Mashary, who became the first recipient of the Arabian Young Leader Award. Designed to celebrate the contributions of those GCC nationals in the sector aged 30 or under, Al Mashary was cited as a fine example of a young professional devoted to her colleagues and role as general manager of the Manzil Downtown in Dubai.

“Being recognised as a leader in the hospitality industry for my work, my contribution to education, youth vocational training and to achieving the UN Sustainable Development Goals for the UAE is an honour I wear as a rank on my shoulder,” she said. As part of her award, Al Mashary was granted a three-day all-access pass to AHIC events and was enrolled onto the Emirates Academy of Hospitality Management Executive Certificate programme.

The Outstanding Contribution to the Industry Award, meanwhile, was collected by Ali Hamad Lakhraim Alzaabi, founder and president of Millennium Hotels & Resorts. The operator oversees 40 hotels in the region, with another 35 set to be developed over the next few years.

“Our commitment as a brand is not only to our employees, owners and customers, but also to causes and organisations that make a difference in the lives of others,” said Alzaabi, referencing Millennium Hotel’s extensive CSR programme.

The operator’s president also emphasised the immense potential of the region’s hospitality sector, inspiring him to “introduce an array of distinct brands to the region, serving different market segments over the past 20 years”.

Before the conference closed, several operators seized the opportunity to ink new development deals and announce broader expansion plans in the region. Millennium Hotels signed two new operation agreements for properties in Dubai. The Millennium Place Barsha Heights includes over 900 rooms and serviced apartments, while the Studio M Al Barsha will comprise 155 rooms and is scheduled to open later this year.

Hilton, meanwhile, announced ahead of the conference its plans to open another 100 hotels in the region over the next five years. With almost 30,000 rooms in the Middle East already, the decision was a decisive vote of confidence in its future as a global hospitality hub. “The addition of 100 hotels will create genuine value for the economy, with some 25,000 new jobs across these hotels as they open in the coming years.”

66
Corporate sponsors and partners featured at AHIC, including Accor and Hilton.
AHIC

Stakeholders will undoubtedly prove keen to showcase similar achievements ahead of AHIC 2020.

Industry experts discuss the hot topics of the event. 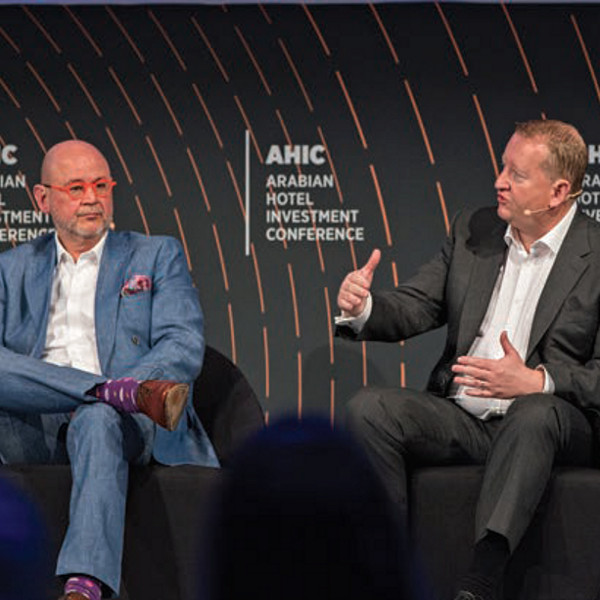