Delivering growth despite the downturn

Rezidor is one of the world's fastest-growing hotel companies and ranks among the five largest hospitality firms in Europe. Hotel Management International talks to the company's chief development officer, Puneet Chhatwal, about the group's record number of openings, maintaining an industry-leading pipeline and future growth.

HMI: What major strengths have allowed Rezidor to grow at such a fast pace during such a global downturn?

Puneet Chhatwal: There are a variety of factors that have contributed to our success. Fortunately, we recognised the signs of crisis early, around 2007 with the credit crunch, and adapted our strategy. We began focusing on conversions, as many distressed, independent hotels sought the safety of international branding. We also had great success in emerging markets, which have proven to be more liquid than the UK, Spain and Portugal, for example. Developers in emerging markets were used to high-equity requirements from banks, so there was less of a shock to the banking system when the credit crunch began. As one of the first companies to have fully fledged offices in Moscow and Cape Town, we had a head start and an important competitive advantage in these markets.

Our brands were also well-positioned to succeed. Radisson Blu is the largest upscale brand in Europe and we had just opened an impressive collection of 'new breed' properties. Park Inn by Radisson reached maturity in key markets and is considered a fresh alternative to mid-market hotels. These factors made us a popular choice for owners and developers.

Finally, we benefited from our strong, long-lasting relationships with our owners, who were willing to entrust us with their new properties. I am particularly proud of this, because relationships are tested during times of crisis. In our case we managed to leverage these relationships to expand our brands.

Will that growth continue at the same pace and to what extent will that be profitable?

Rezidor's growth is set to continue and increase. We opened more than 7,000 rooms last year. The openings occurred in a challenging macro-economic environment, so we are yet to realise the full benefits of these hotels. The markets should continue to improve in the coming months, which will help the newly opened hotels stabilise and deliver strong financial results.

Which brand do you forecast to grow most going forward?

"The brand is well-positioned in the mid-market segment, which clearly offers great value-enhancing opportunities."

We are focused on two of our brands and one of these is Radisson Blu, which we have built into the largest upscale brand in Europe, and the other is Park Inn by Radisson. Park Inn has a successful growth story, rising from zero to 140-plus hotels in less than eight years.

The brand is well-positioned in the mid-market segment, which clearly offers great value-enhancing opportunities. You can put a Park Inn by Radisson in more markets than Radisson Blu, and it is also designed for efficient and cost-effective conversions.

Where are your 'real' pipelines currently, and how do they look?

Hotel Missoni has a series of new openings and signings – what gap did you identify in the market and what is the long-term strategy?

Our CEO, Kurt Ritter, has long held a passion, dream and belief in the success of the lifestyle segment. We were very successful with the Malmaison brand in the UK and when we came out of that partnership we wanted to create our own lifestyle brand. In a sector above the Radisson Blu we saw a niche for customers who want to trade upwards to a more stylish experience, rather than just staying in a typical 'grand' hotel.

When creating the brand we thought it was important to work with an already well-established name to leverage on the awareness, heritage and synergies. We found that perfect match with iconic fashion house Missoni. Hotel Missoni is our global lifestyle brand and we are eyeing development in cosmopolitan cities across the globe. At the initial stages of development we are focusing on careful and selective growth, by opening one or two hotels a year and then increasing to four or five openings a year.

Does this rate of growth pose a challenge for maintaining brand consistency and service levels – how do you protect against this?

There has to be a continuous focus to protect the brand. This is achieved through re-investment in the brand and properties, continuously striving to live up to the core brand values, and listening to our customers. We paused some of our capital expenditure to protect our cash position in 2009/2010, but now, going into 2011/2012, we are spending more money as revenue increases. We had to consider the cost of displacing the revenue – even during periods of low occupancy.

What are the key factors for working well with hotel owners?

More than half of our recent openings have been with multi-unit owners who already have existing properties with Rezidor, and this has to be one of the core parts of our strategy. We have one of the longest serving CEOs who together with the deputy president and CFO have more than 60 years' experience within the company. This leadership and continuation of relationships has worked quite well for us, especially in these difficult times. If you are looking for trust, security and a 'moral' handshake then we are able to provide that.

To what extent is Rezidor committed to sustainable development?

I would go as far as saying that not only are we committed, we are one of the founders of sustainable development in the hotel industry. Our award-winning Responsible Business programme and activities goes back to 1989. It has always been an important area for Rezidor due to our Scandinavian roots, where it's part and parcel of life.

"We strive not to waste water and energy because at the end of the day there is also the cost factor attached to it."

We started to focus on this more than 20 years ago. We were voted one of the world's most ethical companies by the Ethisphere Institute last year; we won the award for best initiative in Sustainability Development at the Worldwide Hospitality Awards by MKG in 2005; we support the Prince Charles Foundation and are signed up to the United Nations Global Compact. It is something very close to our hearts. We strive not to waste water and energy because at the end of the day there is also the cost factor attached to it. The cost of electricity and utilities are going up every day, and we need to optimise every opportunity for a responsible business and cost-saving initiative at all our hotels.

We were one of the first to come up with the principles of reuse and recycle. I used to live in Germany where even nine years ago we had to separate our rubbish into six different bins; other countries like the US are a bit further behind.

What strengths do you need to manage a development team during a recession?

Development professionals have to be determined, creative, resourceful and above all they need to be optimistic by nature. For example, not see the glass as half empty but half full, and have the confidence that deals will materialise and plans will come to fruition. When it comes to technical abilities they need to have a good knowledge of numbers and be skilled at finance. As leaders they have to work more than their followers – it's important to lead by example and build strong teams and relationships. But the one essential quality that differentiates a good developer from a great developer is a good nose! The ability to smell a good deal and the courage to see it through. Fortunately, at Rezidor, we have quite a lot of these great developers, which is why we have been able to deliver a third consecutive year of record new openings, despite and against all odds. 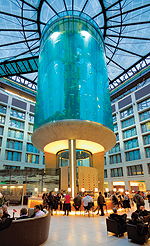