The Londoner wins three awards at the prestigious AHEAD Europe 2022 Awards, including ‘Hotel of the Year’

The Londoner is delighted to announce that they have won three awards at the 2022 AHEAD Europe Awards. 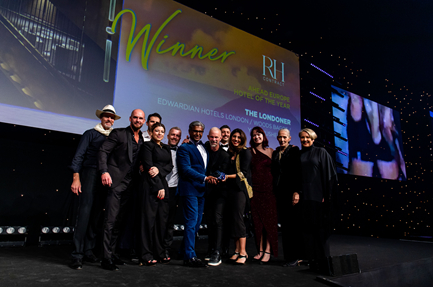 Organised by industry leading publication, Sleeper Magazine, the AHEAD Awards recognise excellence in hospitality. The awards are voted for by a panel of industry experts; architects, interior designers, hoteliers and industry commentators, who follow a careful judging process to ensure a rigorous and balanced decision. They received over 220 entries, and narrowed down their winners to in 18 categories - of which The Londoner won three.

HOTEL OF THE YEAR: Lauded by the judges as “a true visionary project”, the panel was in agreement that The Londoner was “a worthy winner”, with potential to “compete on a global scale”.

EVENT SPACES:  Inspired by the theatres of the West End, The Londoner’s event space offering is deeply dramatic, with a design characterised by mirrored ceilings, plush velvet drapery and artworks hanging from a pulley system to imitate set changes. Set across six subterranean levels, technology and innovation is at the forefront of the design, creating what judges lauded as “a wonderland of event spaces” that “sets a new bar”.

NEWBUILD: Dubbed the world’s first ‘super-boutique’, The Londoner is a 16-storey hotel standing 30 metres tall and 32 metres below street level in the heart of the capital. A collaboration between Woods Bagot and Edwardian Hotels’ Rob Steul; the project was sensitively integrated into the historic urban fabric of Leicester Square, all whilst achieving a BREEAM excellent rating. Judges agreed: this is “the most impressive architectural and engineering feat”, describing it as “hugely complex” and “skilfully executed”.

Iype Abraham, Commercial Development Director of The Londoner, said, “It was the lifelong dream of our chairman, Jasminder Singh, to create a purpose-built hotel in the heart of London as a way of giving back to the city for the success he has achieved over the last 40 years. Mr Singh is delighted that the AHEAD Awards judges have recognised the hotel with these fantastic accolades, and thanks the entire hotel build and Edwardian teams for making this dream a reality”.

The Londoner opened its doors to guests in September 2021, and in doing so marked a rebirth for Leicester Square. The scale of the project was quite staggering, amazing both Londoners and the hospitality industry alike - with 350 rooms, 16 stories, six concept eateries, a unique members club-style private area, a wealth of meeting and event space, cinema and an entire floor dedicated to wellness; The Londoner became  the world’s first ‘super boutique’ hotel.  Designed in collaboration with world-renowned architectural designers Yabu Pushelberg, the opening of The Londoner marked a pivotal moment in the return and scale of global hospitality.