The first Radisson RED hotel in the North of England has arrived in Liverpool. Located in a thoughtfully renovated Grade II-listed property that first opened as one of the original British railway hotels in the 1800s, Radisson RED Liverpool blends history, legacy, and eclectic design as it arrives in this lively city. The hotel is also a culinary destination thanks to its modern barbecue and robata grill restaurant, Stoke. It offers classic dishes with a grilled twist paired with unrivalled views of the neoclassical architecture and acclaimed concert venue of St George’s Hall, as well as overlooking the city’s cultural district. 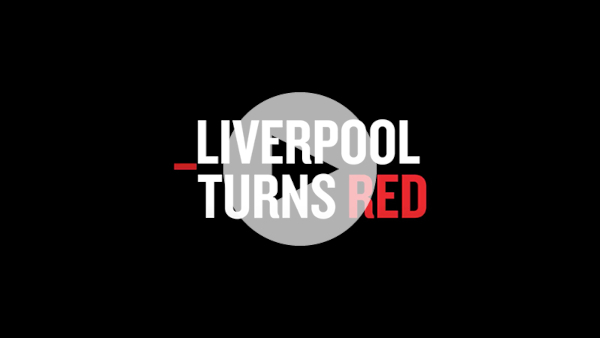 Radisson RED Liverpool’s iconic building - previously known as Northern Western Hall - dates back to 1871 and is located next to, and connected with, Liverpool Lime Street train station. The hotel was originally designed by locally-born Alfred Waterhouse - the architect behind London’s Natural History Museum and Manchester Town Hall - as one of the British Transport Hotels, offering direct links to the neighboring railway station. From the 1930s, the building was largely unused except for student accommodation in the 1990s. 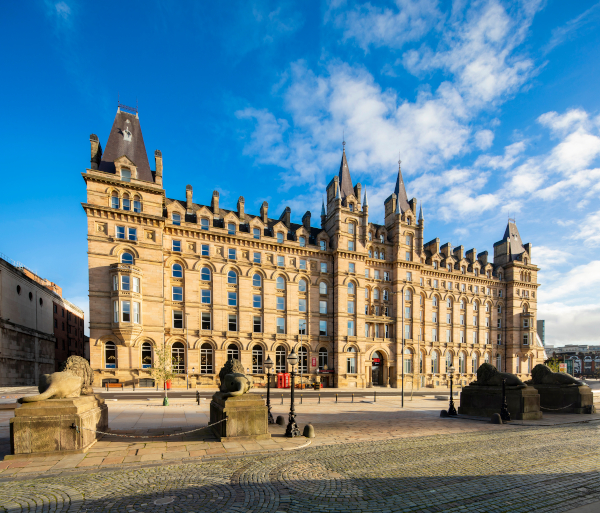 The extensive renovation works saw the restoration of a nineteenth century stained glass window and a grand sandstone staircase. Stained glass experts were enlisted to reconstruct the six-meter-high window above the staircase to fill the atrium with natural light and offer a focal point for guests as they arrive through the main entrance. More than 792 hours were spent refurbishing the grand staircase and world-renowned polishers added the finishing touches to the 94-meter handrail. The building’s unmissable turrets and spires - original features from the 1800s - have also been restored to enhance the hotel’s grandeur. 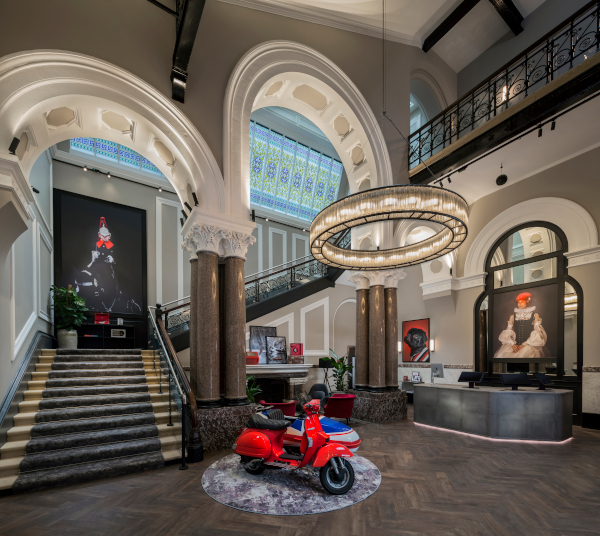 The 10-storey hotel includes 201 guest rooms and suites, some overlooking St George’s Hall, featuring Radisson RED’s signature design-focused, bold, cutting-edge design. A 1960s-style scooter and sidecar as well as a submarine sculpture can be found in the hotel, in honor of the city’s famous music scene and, arguably the city’s most famous export, The Beatles. Bespoke art pieces created by local artist Indigo Art are found in guest rooms and around the hotel, paying homage to Liverpool’s best-known faces, buildings, and culture, including an iconic image of The Beatles crossing London’s Abbey Road. Additional artworks include depictions of local landmarks and hand drawn illustrations in red, added to black and white photographs, such as an image of the Liver Bird, the city’s symbol that appears on its coat of arms and sits atop the Royal Liver Building. 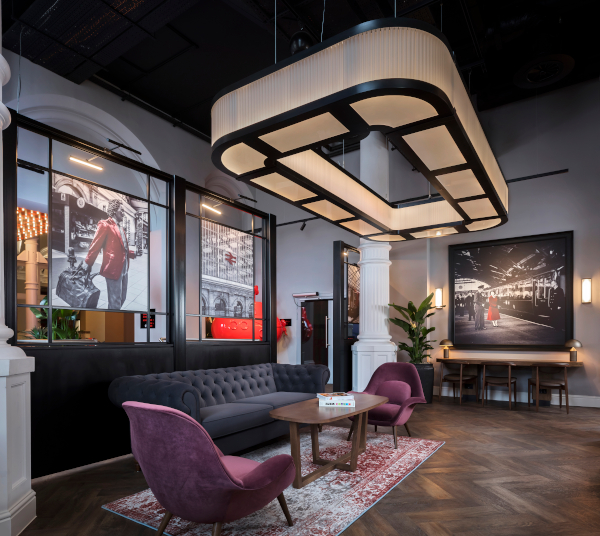 Famed music and entertainment venues such as the Empire Theatre and St George’s Hall are on the hotel’s doorstep, while the famous Royal Albert Dock, retail and leisure destination Liverpool ONE, and vibrant nightlife are close by, making Radisson RED Liverpool the ideal base from which to explore the city.

Destination restaurant Stoke takes center stage on the ground floor of the hotel, offering diners a menu focused on ‘farm-to-fork’ cuisine working with local suppliers, including an 800g 38-day dry aged and grass-fed ribeye, Dover sole with seasonal herbs, and whole roasted chicken, as well as plenty of vegetarian options such as sticky barbeque maitake mushrooms and truffle arancini. The restaurant also features an open kitchen and robata grill. 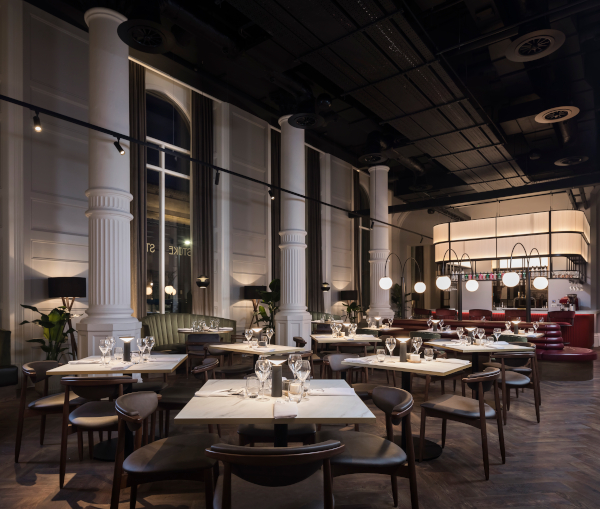 Guests can work out at the in-house gym featuring the latest fitness equipment, or find the perfect space for a meeting, event, or celebration. Radisson RED Liverpool has five meeting rooms on the lower ground floor for up to 50 people for private events, as well as a more intimate private dining room with views over St George’s Hall that can accommodate up to 8 people. 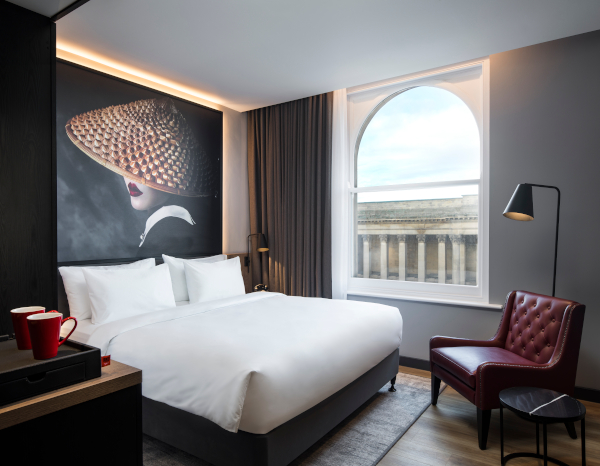 Tom Flanagan Karttunen, Area Senior Vice President, Northern & Western Europe at Radisson Hotel Group, says: “The Radisson RED brand and the city of Liverpool are the perfect match, both representing fun and vibrancy with strong links to music, art, and design. The building has undergone an incredible transformation. It’s one of the first buildings that visitors to the city will see when they arrive so we’ve worked hard to create an unforgettable experience for both locals and tourists.”

Gary Waring, General Manager at Radisson RED Liverpool, said: “The opening of Radisson RED Liverpool and the building’s renovation have been greatly anticipated across the city for some time and we’re thrilled to finally reveal the finished look. Liverpool is an incredibly unique place and we’ve worked hard to reflect this throughout the hotel, paying tribute to local icons and giving a nod to the building’s rich heritage. Bringing an exciting food and drink venue to the city was also a key priority. We are looking forward to welcoming guests and creating a real must-visit destination.”

The Radisson RED brand has a presence in other UK locations, including the multi-award-winning Radisson RED Glasgow and the all-new Radisson RED London Heathrow.

Discover more about why Radisson RED Liverpool should be your base next time you visit the city, over on the Radisson Hotels blog here.