Taking inspiration from waves, dhows and the mashrabiya, Grand Hyatt Kuwait pays homage to the country’s iconic location and traditions, while presenting contemporary aesthetics to the world. As it gears up for a fall opening, the hotel unveils the details of its magnificent interior design, curated by Meyer Davis.

Situated at the tip of the Arabian Gulf, Kuwait owns a rich history for being well known as an oasis of peace and a prosperous maritime port city. This, along with the country’s legacy of sailing, dhow building and pearl diving, inspired the narrative of exploration and opulence within Grand Hyatt Kuwait. 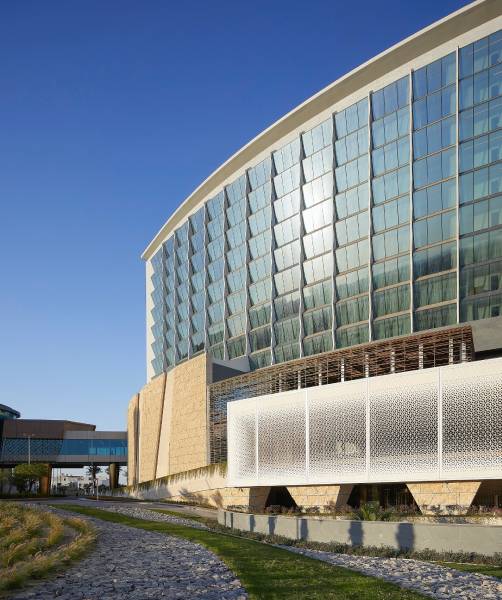 Upon arrival at Grand Hyatt Kuwait, guests step into a captivating setting. The dramatic hotel lobby houses an exceptional art program that celebrates the region and public areas provide an elegant and dynamic backdrop for meetings, socializing and relaxation. The perimeter of the lobby is swathed in weightless white drapery, while the center of the lobby is anchored by a serene marble water-like feature holding a majestic equine sculpture at the center.

The plush interior of the lobby lounge is accentuated by wall panels clad in white geometric patterns, while orbital shapes in the form of an oversized mobile sculpture rounds off the double volume aesthetics. A distinguished feeling of grandeur is established through a bespoke collection of luxury furnishings.

Large-scale artworks were commissioned specifically to fit the theme at Grand Hyatt Kuwait. In some cases, Meyer Davis started with the artwork, and built the interior design around a certain piece. The ultimate effect is one that offers visitors a chance to experience and engage with some remarkable pieces in a way that could be more intimate than at a museum or gallery setting.

The guests’ sensation of grandeur is carried with them into their private quarters. Each one of the hotel’s 302 guest rooms features a large-scale artwork by Tracie Cheng, whose abstract images of soft flowing lines harken to the billowing sails of traditional dhows that sailed across the waters of the Gulf. 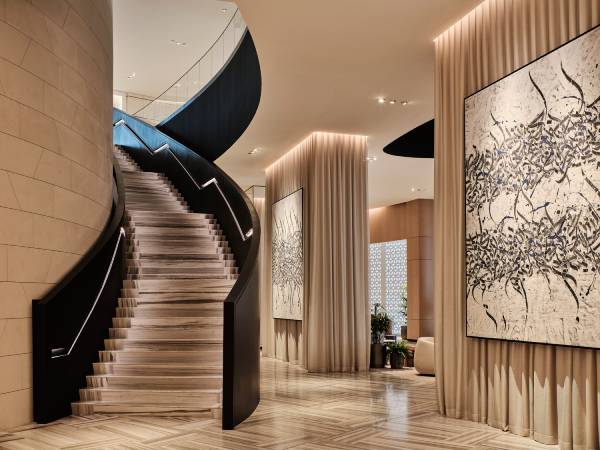 “The goal was conveying an authentic pride-of-place through design. There is a cultural steadfastness in Kuwait that has created a commitment to preserving and honoring the nation’s history. At the same time, there is an openness to modernization. We felt it was crucial that the design, craft, and storytelling on display at Grand Hyatt Kuwait was reflective of that great sense of national pride,” Meyer Davis said.

The tranquil Noor spa and indoor pool is worthy of its own narrative and dialogue. While the design is undoubtedly modern, abstract, and fascinating, it boasts an ancient panache. The design of circular symmetry that contain different spa programs whispers privacy and exclusivity. 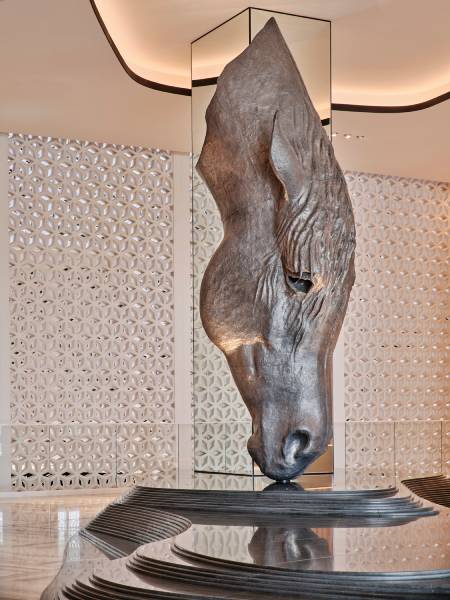 Through the use of spherical architecture, the flow accentuates the indoor and outdoor spaces as elements that draw upon the positivity that is created by different forms of sunlight, shadows and soft edges. Noor spa was created with an inviting sense of mindfulness and serenity resulting in an urban sanctuary that stands as an oasis removed from the everyday.

Offering a total of 2,800 square meters of event space that is sophisticated and impressive in quality, the hotel is worthy of the type of weddings and special gatherings that are expected in the country. A major design element in these spaces is the dedication to flow, with a spectacular sky gazing atrium in the events foyer, adorned with brilliant white geometric patterns.

Special emphasis was placed on pre-event zones. The exquisite bridal suite, a plush boardroom, and a fully functional executive office are all adorned with fluted lacquer doors, beautiful vertical paneling, and sturdy geometry that speaks to the strong cultural aesthetic.

Guests and area residents are transported into a new and exciting world when they cross the threshold of a Grand Hyatt hotel. Unique touches of local flair appear in new forms and uses, imaginatively and creatively transformed from the typical into something unexpected and entirely interesting. 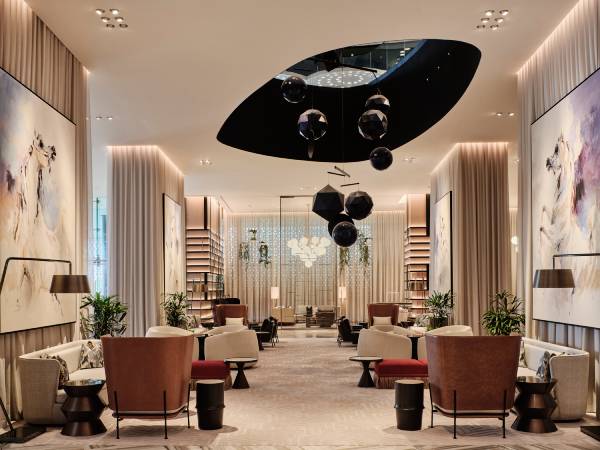 Throughout the hotel’s environment, design and décor are enlivened with concepts and detailing inspired by the area’s art, architecture, crafts, customs and archetypes. It is local in essence but reframed and reconstructed to become a part of the uniquely cosmopolitan and distinctively glamorous Grand Hyatt hotel sensibility.

Considered one of Kuwait's most anticipated and impressive hospitality developments in recent years, Grand Hyatt Kuwait has begun the countdown to its official opening later this year. The impressive property, which marks a major milestone for both Hyatt Hotels Corporation and Kuwait based owners, Tamdeen Group, has already made a mark for itself as a new architectural landmark.

Distinctive in its design and grand aesthetic, the hotel seeks to position itself as an urban sanctuary within a larger destination that has a unique story to tell. The 302-key luxury urban escape, with its impressive and majestic architectural design, delivered courtesy of CallisonRTKL, aims to set itself apart with signature guest experiences which forms an integral part of the country's most immersive luxury social and lifestyle complex.

The hotel's design was conceptualized to seamlessly integrate into the context of the surroundings, complementing the established architectural lines, visually and functionally, while still making a distinct architectural statement all on its own. As the tallest building in the area, the nine guestroom floors offers truly unobstructed views from every angle.

One of the property's most distinguishing design features is its curved design, conceived and executed in lieu of a traditional rectangular outline to allow for a more natural and harmonizing integration into the existing architectural landscape. The hotel's exterior design complements the curvilinear design aesthetic of the 360 Mall extension with a series of layers that splay out with unique characteristics. These multiple design features are focused on achieving an environmentally responsive building – inspired by and adapted for the local climate and culture.

Speaking about the inspiration and motivation behind the project, hotel designer Dustin Wekesser, Associate Principal at CallisonRTKL said: "The entire 360 Mall Kuwait development is a fantastic project with many great entrances and influxes, but as an architectural team, we wanted to make Grand Hyatt Kuwait feel more exclusive and opulent, to set it apart on an entirely different level of luxury."