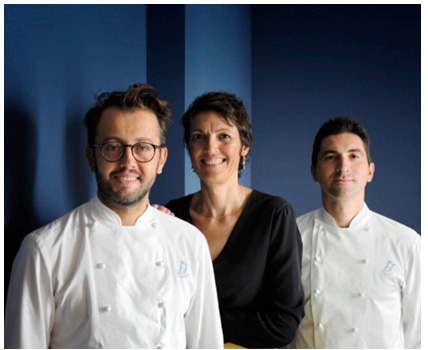 In collaboration with its strategic partners UMIH, GNI and Transgourmet, EquipHotel is organising a Hospitality and Foodservice Summit for hoteliers and restaurateurs later this year.

The event, taking place November 15th-19th, will provide attendees an opportunity to meet and open a dialogue about the difficulties they have endured in their industries this year. Hall 7.2 of the exhibition centre will be dedicated to catering suppliers, and at the heart of it, EquipHotel will set up an agora to encourage attendees to mingle.

The outbreak of Covid-19 has forced everyone in the hospitality industry to reflect not only the importance of their jobs, but also the way in which we perceive food in a number of settings, including hotels and restaurants. Side by side, hotelier and restaurateur attendees are invited to imagine what tomorrow's cuisine and tables will look like for industry professionals. Their mission is to listen and converse, and to try to find ways to change the course of their domains, adopt new attitudes, stand out and be noticed for their actions.

CHRISTOPHE GAUTRAND: DESIGNER OF THE MONTH AND HIS SALON EXPERIENCE

In 2019, the landscape development agency Christophe Gautrand & Associés completed work on the terrace of the Mandarin Oriental’s L’appartement parisien (“Parisian Apartment”) in Paris, and designed evening scenery for Dior Couture at Courchevel 1850 in France.

Their current projects include work for Hotel Cœur de Megève and Hôtel Opéra Cadet (Steller group), the Grand Hôtel of Château de Versailles (LOV and Alain Ducasse group) and the gardens of the Tour Cristal (Allianz group) in Paris.

Gautrand and his associate Benjamin Deshoulieres are proposing a “delicious plants” exhibit, where they will showcase their innovative techniques by creating an unexpected, quirky and unique garden. The idea behind the exhibit is to connect plants and gastronomy, in order to invite attendees to experience unexpected flavours.

Celebrated chef Emmanuel Perrodin will be stopping by the Porte de Versailles exhibition centre to harvest the ingredients grown in Gautrand’s garden and prepare tapas and cocktails in the bar area. In other words: attendees will have a chance to eat from the garden. With this, the team hopes to instill interest in sustainable and eco-friendly practices in hotels and businesses.

EquipHotel is welcoming five industry representatives, each one with their own particular style, who perfectly meet the expectations of travellers, gourmets, gourmands and curious spectators for the 2020s. They each have their own modus operandi, ideas, priorities and teams. Key players in today’s food and hospitality sectors, each representative will have a day to speak to, exchange and share ideas with visitors.

For the first time, a country has been chosen as the guest of honour. This year it’s Italy, represented by Il Luogo di Aimo e Nadia, a two-star restaurant from Milan. Since 2018, the same team has been running Aimo e Nadia BistRo and Voce Aimo e Nadia, each of which is a cafeteria, high-end restaurant and bookshop all in one.

Italy is one of the most represented countries at EquipHotel, both in terms of exhibitors and visitors.

In just a few years, the Experimental Group has carved out a place for itself in the Parisian and international hospitality scene. Let’s set the scene: it’s 2006. Three childhood friends - Romée de Goriainoff, Olivier Bon and Pierre-Charles Cros - are dreaming of creating a cocktail bar together someday, but they are on the verge of abandoning their project. Suddenly, they find a place on rue Saint-Sauveur, in the 2nd arrondissement of Paris. The place, although a quintessential Parisian location, lends itself to the clandestine spirit of a New York speakeasy.

The discovery of that location was the beginning of the three men’s adventure. From 2007, the Experimental Cocktail Club began attracting a larger audience, for a good reason. With its unconventional selection of cocktails and festive and chic atmosphere, the locale truly stands out.

Today, the Experimental Group has six hotels, three bars, six restaurants and four wine bars across a number of locations, including Paris, London and New York.

Cyril Aouizerate is a pioneer, an adventurer. When he finished his studies, he was supposed to become a philosophy teacher. In the early 2000s, he participated in the opening of the first Mama Shelter hotel. He later sold his shares and threw his support behind the creation of a MOB first in Saint-Ouen, and then in Lyon. The MOB was not only a hotel but also comprised an organic restaurant, terrace, outdoor cinema, vegetable garden and pop-up store.

Aouizerate keeps six core values at the centre of all his decision-making: humanity, imperfection, perpetual experimentation, freedom, perseverance and inclusion.

Today, the key to MOB's positioning is social ecology, with a focus on working with organic and locally sourced products, as well as recycling, composting, avoiding plastics and supporting a zero-waste philosophy. MOB also supports "slow fashion" and upcycling via their work with CASA 93, a social project fashion school.

Created in 2014 by Jean-Bernard and Céline Falco, the French five-star boutique hotel brand continues to grow and inspire. A member of the Hôtelier Paris Inn Group, Maison Albar embodies a vision of hospitality stemming from a family hotel tradition born in 1923. In each hotel, the art of living and entertaining with elegance can be felt strongly. Here, luxury is not flaunted, it is understated.

While many of the brand’s locations are currently limited to Paris, future openings are planned for Provence in the French Riviera, Europe and in China.

25hours is a hotel concept that seeks to meet the needs of urban and cosmopolitan travellers. The brand focuses on individuality, authenticity and personality. Each of its locations boasts a unique style and history, an approach reflected by the brand’s motto: "You know one, you know none".

Founded by Stephan Gerhard, Ardi Goldman, Christoph Hoffmann and Kai Hollmann, 25hours Hotel currently has 13 hotels in Hamburg, Frankfurt, Zurich, Berlin, Düsseldorf, Munich, Cologne, Vienna and Paris. Since autumn 2016, 25hours Hotel has been a strategic partner of the Accor Group, with a view to long-term and international growth.