Entrusted with designing Pan Pacific Hotels Group’s first property on the European continent, Yabu Pushelberg draws on the brand’s Singaporean roots and the new property’s iconic British surroundings to emphasize the group’s reputation for sincerity. Characterized as a Turner landscape painted with an Asian brushstroke, the studio fills Pan Pacific London with references to the natural world to establish a relaxing sense of home whilst welcoming visitors from around the globe. 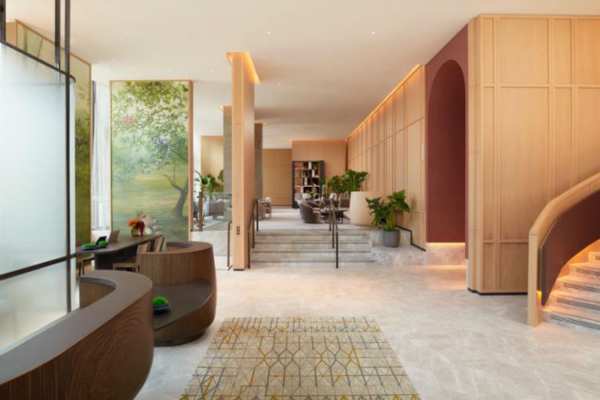 For nearly five decades, Pan Pacific Hotels and Resorts has offered unparalleled hospitality destinations across Asia and the Pacific regions. Today, Pan Pacific London establishes the celebrated brand on a new continent, bringing Singaporean sensibility to one of Europe’s most culturally significant cities. Nestled among some of London’s most striking skyscrapers, the new hotel is just a short walk from iconic landmarks including the beloved Gherkin, the Guildhall Art Gallery, and the historic Tower Bridge. Pan Pacific London is housed in a 43-floor bronze tower situated in a public square across from Devonshire House, a shopping and dining destination with a 144-year history of its own. With transportation hubs and the offices of premier global institutions nearby, the new hotel sits squarely at the intersection of commerce, history, culture, and travel. To honor the historic introduction of the Pan Pacific legacy into the heart of the United Kingdom’s capitol, Yabu Pushelberg aimed to celebrate the group’s modern Singaporean roots while simultaneously paying homage to quintessential British design. 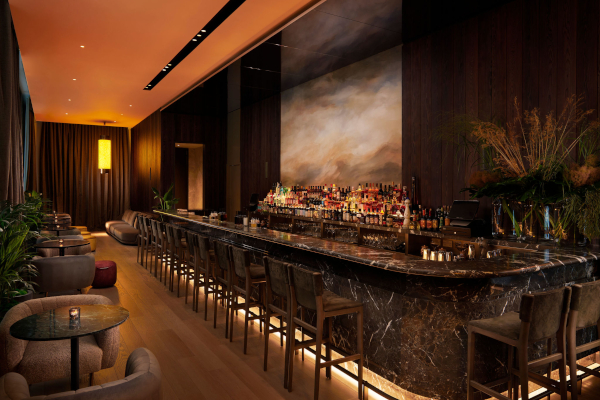 Yabu Pushelberg’s approach to designing Pan Pacific London began with establishing the essential character of the property’s defining influences: Singapore and London. Singapore’s multiculturalism and tropical climate inspired the design studio to consider South Asian influences from the natural world when devising the decorative motifs throughout the hotel. London’s reputation as a dynamic, wildly international city inspired Yabu Pushelberg to create a retreat from the surrounding energy where guests could rest and appreciate London’s cosmopolitan outlook. To accomplish this, the studio married traditional British themes with organic forms, rooted in the warmth and comfort of Pan Pacific’s heritage.

The studio crafted a relaxed yet elevated residential feel, conceiving of the entire hotel as a home. The underlying voice of a private residence throughout the hotel reinforces a welcoming aura, inviting guests to be at ease. Drawing on their unique expertise in sympathetically introducing modernity to traditional concepts, Yabu Pushelberg reinterpreted qualities of an English manor house. This approach establishes the interior architectural identity of the project, while Singaporean flair is layered throughout by way of art and accessories. Organic forms and botanical murals in the public spaces and guest rooms introduce the theme of nature, positioning the hotel as a true oasis within the energetic city environment.

Yabu Pushelberg has instilled the hotel’s public spaces with tailored, quintessentially British wit and the enticing calm of warmer climates. Custom murals by Moss & Lam depict Southeast Asian flora and fauna throughout the property, an updated take on traditional British wallcoverings from the 18th Century.

In reception, the studio places an organically shaped desk against striking linear paneling. Yabu Pushelberg references British heritage in the wooden paneling, which mimics the pattern of plaid, while introducing modernity by way of a neutral palette. Similarly, an amorphic desk marries nature with the softness of a welcoming residence, serving as a fitting introduction to the major themes of the hotel as guests check in. The studio commissioned a mural behind reception depicting British greyhounds and Asian parrots and lemurs to playfully state the hotel’s influences and charm. Small groupings of artwork line the hallway to the guest floor elevators, drawing on the contemporary notion of personalized gallery walls to reinforce a sense of home.

Yabu Pushelberg has designed the Lobby Lounge for interactive and dynamic experience, drawing guests into the public spaces of the hotel. Similar to the gallery wall concept, art ledges reference the decoration of private residences, inviting visitors to drop in for a cocktail or afternoon tea while encouraging conviviality.

The updated English paneling is continued from Reception to Lobby Lounge, where the studio complements the neutral palette of the wood with plush seating upholstered in sophisticated mineral tones and a modern slate-blue. Yabu Pushelberg emphasizes natural influences while creating frisson between material and form in the selection of carved stone for both the elegant sweep of the Lobby Bar and the Lounge’s linear floating fireplace.

The design team then carries the paneled screens from first floor reception up and to the wellness floor to maintain a sense of continuity and connectedness. Tall ceilings create a sense of freedom and expansion within the busy city, while a poolside fireplace adds residential sentiment. The studio further accentuates residential touches in an environment dedicated to wellbeing inclusive of sofa lounges as thoughtful replacement for traditional poolside chairs and by introducing art and carpeting to areas of the Gym facility. The studio designed two additional lounges to offer even greater privacy and utility, extending Pan Pacific London’s hospitality to the use of space itself; a casual lounge adjacent to the pool provides a place for guests to step away or gather privately, and the fully draped Drawing Room provides an area for guests to relax before or after their spa treatments. 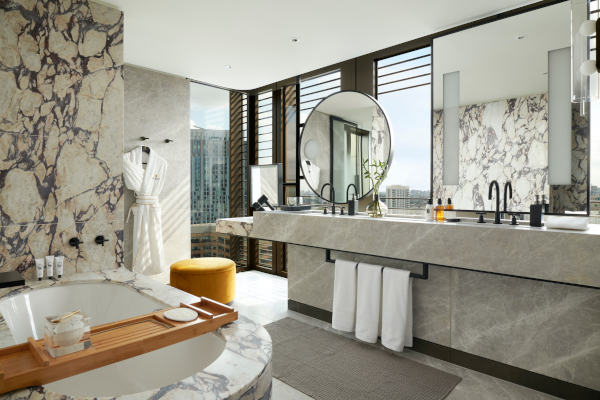 Yabu Pushelberg has outfitted all 237 guestrooms with entirely custom furnishings to offer a truly unique hotel experience. The studio imbues each room with complete tranquility by designing private spaces with no 90-degree angles; instead, the walls are gently curved where they meet, creating a sense of soothing embrace. Here, Yabu Pushelberg turns to a softer color palette than that found in the public spaces of the hotel, presenting seascape greys with accents of mossy green and forest blue to inspire easy sleep.

In partnership with Moss & Lam, Yabu Pushelberg features custom murals as headboards in each guestroom to again introduce elements of nature through artwork. The murals conceptualize four arboreal themes: oak, elder, elm and maple. All English tree species in origin, they were brought to life using Asian brushstrokes in continued celebration of Pan Pacific's Singaporean roots. The studio selected plaid carpeting to add a definitive nod to the hotel’s British essence.

Straits Kitchen: The Gem of the Hotel

Within the context of the hotel, the studio granted to the all-day dining space a unique language of its own. Yabu Pushelberg designed the restaurant with boldness and brightness, introducing a quirky character to contrast and complement the British manor house narrative of the hotel’s other environments. Softening this contrast, the design team outfitted the private dining spaces in wood paneling to create continuity with the lobby. Large botanical murals by En Viu—known for their combination of old- and new-world influences—are featured as partitions in the dining space, introducing Asian spirit by featuring South Asian botanicals, and referencing the Asian influence on the cuisine to be served. Boasting two private dining spaces and custom large-party dining tables and lighting pendants, the restaurant echoes the bespoke nature of private homes even as it stands out from the hotel’s other spaces. A custom wine storage fixture houses an extensive collection within glass cabinets with curved stone shelving, celebrating the contemporary essence of the space by creating interesting niches for display.

In the all-day dining space, the studio uses cooler wood tones juxtaposed with pink, resulting in a vibrant counterpart to the warm, neutral tones of the hotel. The design studio creates further contemporary interest through color by punctuating the coffee bar with accents of yellow, drawn from the variegated stone counter. Yabu Pushelberg maintains the elegance of the hotel by imagining the coffee bar as a lounge, rather than a grab-and-go concept. The character of a luxury café invites guests to linger. Still, central countertops allow for essential variability in the hotel’s primary dining space, which is designed to host breakfast, lunch, and dinner. As lighting changes throughout the day, the restaurant maintains its vibrancy and energetic nature, offering a place for guests to gather and enjoy, renewed by the serenity of the hotel’s other environments.