Be the disruptor – the European Hotel Managers Association AGM 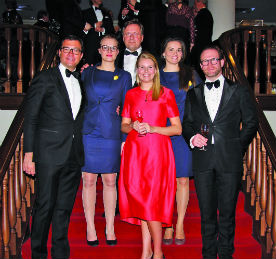 For professed experts and establishment interests, 2016 was not a good year. Whether it was the Brexit referendum, Donald Trump attaining the US presidency or Leicester City winning the English Premier League title, established norms appeared to be suspended and we were conditioned to expect the unexpected. In truth, it felt as though anything might happen.

It seemed apt, therefore, that the European Hotel Managers Association (EHMA) organised its 44th Annual General Meeting, held on 17–19 March, around the theme of ‘Disrupters in Hospitality’. In an uncertain world, the one thing that is certain is that people will want to discuss uncertainty.

Founded in 1974 as “an association of professional managers operating first-class or luxury hotels of international repute committed to fostering fellowship and fraternity”, EHMA remains a bastion for traditional hospitality values but it has also had to change with the times, reflecting a more international, corporatised and brand-driven hotel environment. A great part of the luxury segment’s appeal traditionally lies in delivering those timeless intangibles of quality service, but even the grandest of European grandes dames cannot afford to remain oblivious to the transformational new players entering the market on supplier and operator sides.

Whether it’s Airbnb, emerging booking platforms or new property-management systems, general managers of all levels and stripes must remain aware of what is going on in a rapidly evolving market. “There are now so many things to be aware of,” EHMA president Hans Koch said over lunch on the opening day. “The idea is what we can learn and do differently. How do we also become disrupters?”

The event was held at the Grand Hotel Huis ter Duin in Noordwijk, a seaside town on the North Sea between Amsterdam and The Hague. The result of the Dutch general election had been called the day before and delegates from across Europe – even as far afield as the US – seemed remarkably well informed on the machinations of Dutch politics amid ultimately unfounded concerns that the populist right-winger Geert Wilders might pull off a Trumpian victory. In terms of disruptive elements and unknowns, few in London, Paris or Rome could have predicted 12 months before that they’d be following electoral politics in the Netherlands quite so closely.

In with the new

On Friday 17 March, Koch officially opened the institutional part of the meeting and the welcome was given by the president of the organising committee, Albert Rouwendal, EHMA national delegate of the Netherlands and general manager of the Mövenpick Hotel Amsterdam, alongside Bernard Lensink, GM of Landgoed Duin & Kruidberg Santpoort, and Stephan Stokkermans, GM of the Grand Hotel Huis ter Duin in Noordwijk aan Zee.

Hans Koch immediately set the tone for the conference, homing in on technology as the main source of disruption and commenting on how important social media had become for EHMA. He emphasised the manner in which a member’s forum on the association’s new website would provide a platform for broadening, developing and maintaining relations between members. “We must all be better connected,” he said.

In a sign of the association’s ability to move with the times, 29 new members were inducted, giving brief self-introductions from the stage and drawing prolonged applause from the audience. In recent years, EHMA has placed a lot of emphasis on attracting a new generation into the fold, and this was reflected in the age profile of a large percentage of this latest intake. It has also been helped by strong partnerships with various hotel schools and educational bodies, including La Fondation pour la Formation Hotelière, Ecole Hotelière Lausanne, Cornell University, Stenden Hotel Management School, Hotelschool The Hague, and Glion Institute of Higher Education, all of which were in attendance. Tom Kline, executive director of executive education at Cornell University, commenting on the sheer number of new members, provided an unprecedented six places for free courses on the university’s professional development programme. Valérie de Corte, alumnus and industry-relations director of Ecole Hotelière Lausanne, raffled places on two courses: ‘Women and Leadership in the 21st Century’ and an executive education module.

HOTREC also enjoys a special relationship with EHMA, and its president, Susanne Kraus-Winkler, delivered an enlightening address on the latest issues impacting the industry.

“We are living in difficult times with unclear future scenarios,” she said. “In addition to macro problems in politics and the economy, the hospitality industry is disrupted by digitalisation and technological innovation. Besides the lack of skilled labour, bureaucracy and taxation, with regard to distribution, rate parity clauses, unfair B2B practices, sharing economy and property rights are issues we have to deal with to stay competitive.”

The following morning, Deputy King’s Commissioner Rogier van der Sande opened EHMA’s ‘Educational Day’, highlighting the valuable role travel and tourism played in the country’s economy and commenting that the hotel within which we sat was older than any Dutch political party. Proceedings throughout were expertly moderated by Sander Allegro, director of industry relations at Hotelschool The Hague, and speakers were invited on to the stage to discuss major trends and developments currently disrupting the industry.

In addition to macro problems in politics and the economy, the hospitality industry is disrupted by digitalisation.

Chief among them was Hans Meyer, a hotelier who caused a major industry shake-up as a co-founder of citizenM and has now returned with a new concept, Zoku, an office/home hybrid targeting the “global nomad”, stressing sociability, creativity and comfort. It had Meyer promising “the end of the hotel room”.

“It’s a completely new hotel category,” he explained. “Traditionally, the bed has been the dominant piece of furniture in any hotel room but, for us, the bed is hidden and the kitchen table is the centrepiece of the experience. It’s where the guest takes coffee, holds a meeting and might have people for dinner in the evening. The target audience has a global mindset and a millenial mentality. We really work with that audience very closely, creating the best of home, hotel and office.”

Keep up with the times

A further highlight was delivered by a hotel-school panel composed of Michel Rochat, CEO of Ecole Hotelière Lausanne; Susanne Stolte, president of the board of directors at Hotelschool The Hague; and Klaas Wybo van de Hoek, VP of Stenden University of Applied Sciences. They debated how the very nature of education needed to adapt in order to remain relevant to the latest generation of budding hoteliers.

“My disrupters are my students,” van de Hoek said. “We need to harness their way of thinking instead of trying to simply make them conform with previous generations. That presents challenges and opportunities.”

“The hotel industry must give them the chance to be those disrupters,” Stolte agreed.

“Yes, but they also need real-world experience and human skills,” Rochat cautioned. “What good is all this technology when the guest is standing right in front of you?”

Up your tech game

It is a sign of how fast things move that Peter Verhoeven, managing director EMEA at Booking.com, had arrived at the event to find himself representing the establishment. He spoke about how the company uses data to improve customer experience with AI, advising hoteliers to learn how to make more intelligent use of the information at their disposal. He was joined on stage by new kid on the block Kristian Valk, founder of Hotelchamp, who outlined the future of direct revenue, and advised ways to increase direct bookings and guest engagement by using smart technology.

In the past five years, Valk commented, mobile bookings have grown from 11 to 40%. Technology has become the ultimate disrupter and, globally, hotels are searching for solutions to improve sales through direct channels. The answer is personalisation, making the online user experience unique, relevant and adjusted to every customer’s needs. When asked what percentage of bookings should come through the hotel’s own website, Valk replied: “It depends on the hotel, but the answer will almost always be ‘more than is currently the case’.”

The final panel of the day consisted of Madigan Pratt, president MP&A Digital and Advertising; Dennis Spitra, senior business development manager at STR Global; Peter Agel, global hotel segment leader for Oracle Hospitality; and Ilham Kadri, president of Diversey Care and SVP of Sealed Air. Distribution channels and OTAs again accounted for much of the conversation, with hoteliers counselled to watch changes such as the dramatic transformation taking place in the wholesale tour-operating business.

Kadri discussed the ‘Internet of Clean’, a platform that connects machines, dispensers, sensors, beacons and other smart devices to improve safety and operational performance, visibility of assets, and task prioritisation; reduce use of water and chemicals; and increase guest satisfaction. “The robots are coming,” she declared. It looks as though they will take many shapes and sizes.

As always, the event closed with a gala black-tie dinner, boasting a menu that showcased the best of the Netherlands, with a different hotel from the organising committee accounting for each course.

In the spirit of showcasing the best of the best, prizes were also presented. EHMA Sustainability Award by Diversey Care 2017 was given to Andreas Georgiou, GM of the Amathus Beach Hotel Limassol, in recognition of the property’s outstanding long-term endeavours to protect and even improve the environment.

The winner of the European Hotel Manager of the Year 2016 Award was Alessandro Cabella, MD of the renowned Rome Cavalieri, Waldorf Astoria Hotels & Resorts. “It gives me great honour to receive this prestigious award, presented by those who, like me, love the hotel and hospitality world, and are living its challenges and difficulties on a daily basis,” he commented. “I dedicate the award to my team, which supports me each day in this wonderful adventure of making sure our guests are at the centre of our attention.”

Last but not least, EHMA’s Lifetime Achievement Award honoured the extraordinary career of Hans Wiedemann, MD of the Badrutt’s Palace St Moritz, an iconic figure within EHMA and across the European hotel industry as a whole.

After the past 12 months, it seems foolhardy to predict what might change between now and EHMA’s 45th Annual General Meeting, taking place in Marbella at the Grand Meliá Don Pepe and Puente Romano Beach hotels. Nevertheless, Wiedemann’s award served as a reminder for the assembled delegates that, amid all the talk of delivery platforms, search engine optimisation and millennial mindsets, there remains a core set of values and ideals that will continue to differentiate the very best in the hotel business.

They are qualities that EHMA will keep promoting and celebrating.