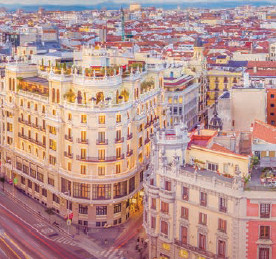 Spain as a whole recorded 37 consecutive months of growth in revenue per available room (RevPAR) between March 2015 and March 2018. There have been marginal RevPAR decreases in recent months, mainly driven down by declines in Barcelona – the country’s largest hotel market (more than 60,000 rooms).

“Investment into Spain’s hotel sector has been largely driven by strong international tourism demand, even during the financial crisis,” says Albert Grau, founding partner of Magma. “Increasing holiday tourism, as well as ‘bleisure’ travel, has set the market up for numerous development opportunities, with several operators currently working to improve their products and services to meet this increasing demand.”According to STR analysts, throughout most key Spanish markets, including Madrid (more than 50,000 rooms), hotel performance remains on a strong upward trend. Hotels in several Spanish markets benefitted from a shifted demand from resort markets, such as Gran Canaria, throughout 2016 and 2017 as they struggled with security concerns.”

In 2017, Madrid experienced the highest RevPAR growth (+17.4% to €77.34) in Spain, mainly driven by a strong increase in average daily rate (ADR) (+14.2% to €106.79). Madrid is one of Europe’s top ‘shortbreak’ destinations, and demand has been steadily increasing in several markets in Asia as well as the UAE, particularly in group bookings (bookings of ten or more rooms at once).

“There is tremendous potential for hotels in Madrid to continue driving rate growth,” says Robin Rossmann, managing director for STR. “Compared with other European capitals, Madrid is still operating at a relatively inexpensive average daily rate. As demand continues to grow, and as the market’s landscape continues to change with more higherend hotel properties coming online, we should see rates start to rise as the market attracts a larger customer base with strong purchasing power. This, in turn, should help the revenue and profitability of the Spanish hotel sector continue to grow.”

Madrid’s corporate demand continues to rise because of a strong international events calendar as well as the relocation of several company headquarters from Barcelona. For the year end of 2018, STR forecasts ADR growth of roughly 3% for Madrid.

Despite ongoing political uncertainty, Barcelona hotels have managed to maintain somewhat steady rates, with more notable declines recently. Following the 1 October referendum, the market’s occupancy levels dropped considerably. In the first half of 2018, occupancy declined by 5.2%, while ADR fell by 1.4% compared with the first half of 2017.

“While it is still too early to make any sort of prediction on what will ultimately happen in the market, Barcelona will likely make a quick recovery when the situation stabilises,” Serrano says. “Prior to last October, Barcelona hotels were consistently seeing monthly double-digit RevPAR growth throughout 2016 and 2017, when the market was still benefitting from strong international demand and shifted tourism demand from destinations in Turkey and North Africa. Barcelona’s recent instability has stunted these previous growth levels, with drops in occupancy driven by decreases in domestic and international demand, mainly from the US. However, if the market can maintain steady rates, we should see growth resumes as consumer confidence returns to Barcelona.”