Front of house is often the most overlooked aspect of a restaurant’s success. With the demand for new staff rising, we investigate the challenges the industry faces in looking to entice new talent, and speak to industry professionals about the changing expectations of diners towards their wait staff.

Earlier this year, Josep Roca, the sommelier of El Celler de Can Roca, asserted that a great waiter is more than a transporter of plates, he is a happiness salesman. He should know. In May 2017, the restaurant he runs with his brothers Joan and Jordi in Girona, Spain, was handed the Ferrari Trento Art of Hospitality Award for excellence in hospitality by Restaurant magazine.

Service – from high-end establishments to select service, and the more recent trend of fine casual – has been going through a period of change. This state of flux affects most of those with front of house careers, and it’s a complicated picture. Consider the potential health risks. In 2015, researchers at Southern Medical University in Guangzhou, China, analysed the data of more than 138,700 participants from six studies on jobrelated health. The so-called ‘high stress’ category featured jobs that were demanding and with low levels of control – such as waiting staff. The conclusion, that waiters and waitresses have a 22% higher risk of stroke on average than those with low-stress jobs, probably surprised few who work in the sector.

Add to this an ongoing debate about tipping, low wages, long work hours and creeping automation in the sector, and a career waiting tables quickly loses its appeal. All these factors contribute to a dearth of new staff joining the service profession in an industry that is set to need more educated members of staff in the future.

Reflecting this increasing need – an estimated one million new jobs will be created in the leisure and hospitality sectors by 2024 – from September 2018, the Culinary Institute of America (CIA) will offer a bachelor's degree in hospitality management.

“The hospitality business continues to expand at a remarkable rate,” CIA president Dr Tim Ryan said earlier this year. “Future managers in this field need direct knowledge of what they’ll someday be overseeing. The Hospitality Management major at the CIA will provide the knowledge and experience for our graduates to create first-rate hospitality experiences, and manage food and beverage operations that really stand out to guests.”

The 1800s and 1900s saw a succession of different approaches to service: the elaborate, banquet-style French, the more sequential Russian, the English familystyle service and US service, which saw food plated in the kitchen before it reached the guest. Since that time, the dining world has witnessed a veritable revolution in the front of house profession.

Recent years have seen a new breed of restaurants emerge, operated by younger, entrepreneurial foodservice professionals who have brought about a new kind of hospitality. Suspicious that the pressed white tablecloths only serve to hide bad quality furniture, they introduced uncovered tables, clean lines and a more relaxed contact with the customer in the dining room.

A good example of this new wave in restaurant service is the Clove Club in London. Started by three friends – Johnny Smith, Daniel Willis and chef Isaac McHale in 2013 – the Clove Club introduced London diners to a new style of service. The kitchen, totally integrated into the dining room, saw guests seated close to the chefs, observing the plating and smelling the aromas from the stove. When it came to service, it wouldn’t be a waiter bringing each dish to the table, but the chef who prepared it. This development, according to Smith, happened in an organic way.

“Isaac put it very nicely in that, with the Clove Club, we wanted to build a restaurant for our generation; a restaurant we would want to visit,” he says. “I wouldn’t want to say we had a big impact on London’s restaurant scene, but I do think we were one of the early operators to maybe set that new tone.”

The fine food and relaxed service combination struck a chord with diners, and the Clove Club soon became one of the hard-to-score reservations in the city. But does this represent a genuine shift, or is it merely a case of the dining sector broadening? Fred Sirieix, general manager of the Michelin-starred Galvin at Windows and author of Secret Service: Lifting the Lid on the Restaurant World, which draws on stories from his front of house career, believes it is the latter. “Before, top restaurants were few and far between; now there are many, but we have also seen a popularisation of restaurants. At the end of the day, it’s a different way to dress it up, but we are talking about the same thing,” he says.

Sirieix refers to what he calls the “obsequious, over-the-top service and forced, refined language” in some highend restaurants that is starting to change. “It is a rejection of this pretension,” he notes. At heart, good service hasn’t changed. “You want people to greet you at the door and make you feel good; you want them to deliver what they promise; you want good food, on time; you want people to be nice and the bill to be right at the end of the meal. That will never change.”

Smith, who now manages the Clove Club trio’s second restaurant, Luca, says the more relaxed manner in their restaurants does not mean lower standards. “I want the key components to remain the same – an attentive staff that are knowledgeable, friendly and informative,” he says. “I think in fine dining restaurants there has been a tradition for it to be a little stuffy. We just wanted to relax all that and allow the staff to be themselves.”

Of course, it is not just the fine-dining sector where service matters. “Good service is good service, whether you are at The Ritz or a roadside cafe,” says Siriex. “It’s when the people you look after know they can trust you. This is what a good customer journey in a restaurant is all about, making sure that people can trust you and they know that you will deliver, no matter what. If there is a mistake it’s recognised, it’s dealt with and we move on.”

For Smith, the experience starts almost at the point when the diner hears about the Clove Club. “From the moment they see the website, which is a representation of us, our ethos – how we want to portray the restaurant,” he says. Once inside the restaurant he refers to what they call ‘adaptable service’, “You need to be able to draw on all your experience and knowledge to try and guess what will be best for the guest.”

Getting the servers back up

The Michelin Guide famously states that it judges restaurants only on the food; service does not factor in the star rating from an inspector. “I can verify that and I know this is true,” says Abel Valverde, maître d’ of two-starred Santceloni restaurant, housed within Madrid’s Hotel Experia.

“Should service be more prominent in the rating? Yes, I would possibly give it a bigger role. But the service and the space are already represented in separate ratings in the Michelin Guide, we tend to forget that.

“If the same food is offered in two different restaurants, one with bad service and one with good service, the diner will go for the restaurant with good service. The food might be cooked with all the love in the world, but if the service is bad the whole experience loses its value.”

Despite its vital importance, fewer people are applying to work in front of house positions, despite the sector growing. While the profile of chefs has increased, service staff have received less attention. Søren Ledet, the co-founder and wine director of Geranium restaurant, in Copenhagen, was working as a chef when he switched to front of house out of necessity – co-founder Rasmus Kofoed was a chef too, and the pair felt they needed one of them to be present in the dining room.

“I had no idea what it was like front of house. I thought a waiter was just somebody who took my beautiful food and put it in front of a guest – that was their job. But I found out there is so much more,” he says. “Front of house can change the experience for a guest, for better or worse. You can go to a restaurant and have the best meal ever, but if you have terrible service you leave the restaurant with a bad experience.

"On the flipside, you can go to a restaurant and have a mediocre meal but experience amazing service and you’ll remember that meal for a long time.”

Valverde says he has made a conscious decision to build his profile. Last year, he published Host, a book chronicling his life in service and his experiences in top restaurants.

“We have always lacked these reference points in our trade – it is very easy to see the big chefs but much harder to notice big service directors. I think we need to be the reference points and show people who are looking for a career that this is a wonderful choice; you can have so many opportunities and work options in this profession,” he says.

“There is a demand, the work can be very well paid and, if you get the education, are dedicated and learn languages, you can go very far.”

So what of the golden rule that the customer is always right? “Does the fact that you pay the bill give you the right to everything?” asks Valverde. The customer, he notes, was always right in times when people had servants, but just as service has evolved so has the dynamic between server and client, reflecting mutual respect.

“The fact that you pay the bill gives you rights, but it also carries responsibilities,” he says. “The customer is right – until he isn’t.” 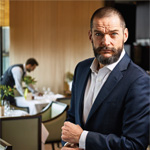 Fred Sirieix of the Galvin at Windows, prefers a less stuffy waiting style. 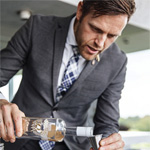 Søren Ledet, co-founder and wine director at the triple Michelin-starred star Geranium in Copenhagen, Denmark, started as a chef, but switched to front of house.
Post to: