Up on the rooftop

A growing number of urban hotels are offering both guests and local clientele outdoor, pan-seasonal rooftop and outdoor spaces in which to wine, dine and mingle. Representing a new area of revenue generation, the al fresco trend could be here to stay, as Ross Davies reports.

Over the last century, the urban rooftop has undergone reinvention. In the beginning, in the biggest US cities – especially New York – rooftops either housed industrial equipment or the drying laundry of tenement building residents, who were mainly made up of working class immigrant families.

In early 20th-century Europe, rooftops in prosperous cities such as Paris and Vienna, were sometimes converted into gardens or theatre spaces, prefiguring modern tastes for the al fresco experience.

With urban space at an all-time high premium, and urban populations straining at the seams, the rooftop terrace or balcony is often the hallmark of luxury for today’s city-dwellers. Hotels, too, understand the pulling power of offering guests al fresco spaces, be it for a sundowner by the pool or a five-course tasting menu under starlight.

Over the past year alone, a number of urban al fresco design projects have seen the light of day across the world. Opened in July, Waldorf Astoria Dubai International Financial Centre (DIFC) – the brand’s third property in the emirate – is notable for its inclusion of a rooftop lounge. Known as St Trop, in homage to the French Riviera, the timber-decked space offers cocktails and panoramic views of the city.

“Our mission for St Trop is to create a space which combines the elegance of the south of France but with an undeniable Middle East backdrop,” explained Victor Chalfoun, general manager, Waldorf Astoria DIFC. “The expansive views from the heart of Dubai blend with the classic French design elements offering an evening ambience which is ideal for the DIFC set.” Elsewhere, Caesar’s Palace Las Vegas Hotel & Casino recently opened up its first al fresco cocktail garden. Designed by British restaurateur-cumreality star Lisa Vanderpump, the space is dominated by olive trees and lighting fixtures, and contains a restaurant. Meanwhile, a new Four Seasons property in Bengaluru, India – the hub of the country’s high-tech industry – has al fresco areas adjoining each of its on-site restaurants.

As in the Big Apple, rooftop and outdoor spaces are becoming increasingly common among London properties, though starting from a somewhat lower base. According to Venue Search London, an event specialist focused on the UK capital, a growing demand has emerged for hotel rooftop popups, especially during the summer months. In September, The Biltmore Mayfair, LXR Hotels & Resorts opened its doors. LXR – Hilton’s most upmarket offering – has incorporated a year-round al fresco terrace into the property, as created by local luxury interior design house Goddard Littlefair.

Across town in East London, overlooking the Olympic Park, The Stratford at Manhattan Loft Gardens, welcomed its first guests in June. The latest addition to the area’s ever-changing skyline, it includes three sky gardens, designed by landscape architecture firm Randle Siddeley, as well as an Allegra restaurant with outside seating.

Open to the public

The examples listed above all show that operators see al fresco design as a money-spinner. As well as serving guests a twist on a typical city break, the aforementioned properties also share a common theme: they are all geared as much to local clientele as they are to out-of-towners and repeat guests.

According to Waldorf Astoria – another Hilton brand – the new rooftop lounge in Dubai is popular with the city’s post-work crowd. Likewise, the Rose Hill Rooftop in New York is accessible to the public, just as the Stratford Hotel is open to London’s more well-heeled residents.

“In an ever-growing, ever-developing city such as London, those seeking sunshine, entertainment and rejuvenation have started to look up,” Christopher Ashton, interior architect at Areen Design, observes. “This serenity, when reflected in the architecture and interior design, can transform an offering from an amenity to a destination. The opportunity has not been overlooked in London with many rooftop bars opening, offering a contrast to the packed streets below.

“A well-considered external terrace has the power to transform an ordinary restaurant to an extraordinary destination, drawing guests not just from the hotel beneath but from even further afield.”

As Ashton points out, it is the above-versusbelow contrast that makes dining on the 20th floor so appealing to many. There are also a number of pros to dining al fresco. According to some areas of scientific belief, eating outside sharpens the senses, making food taste better.

Provided the weather is clement – and the insects are at a minimum – dining outside is also immensely pleasurable. As once claimed by Elsie de Wolfe, commonly regarded as the US’s first interior designer, “Eating outdoors makes for good health and long life and good temper – everyone knows that”.

The brilliant 18th-century French lawyer and gastronome Jean-Anthelme Brillat-Savarin felt the same way, once writing: “Seating themselves on the greensward, they eat while the corks fly and there is talk, laughter and merriment, and perfect freedom, for the universe is their drawing room and the sun their lamp.”

For operators, looking to take advantage of every available square a property has to offer, al fresco rooftops make sound business sense. They afford the opportunity to attract guests and customers without surrendering essential interior space.

“It’s an economic model,” said Simon Ha, a partner at LA-based architecture practice Steinberg Hart, in a 2018 interview with Redshift. “My hotel clients want something that’s going to set them apart. The rooftop definitely does that, and they make a ton of money because of it.”

Much of this also ties into what is commonly described as the ‘experience economy’, in which consumers – particularly Instagram account-holding millennials – are more concerned with the sensory rather than a stand-alone product.

According to Chris Anderson, chief commercial officer at US hotel developer White Lodging, “Rooftop bars are making a comeback in the hotel industry, particularly in the experience of the experience economy, where guests expectations go far beyond just a room. It should be no surprise then, that building up top helps hotels stand out.”

Al fresco moments, high above the city, also make for those mercury-like Instagrammable moments, whether it be a snap of the night lights beyond or a decorative cocktail in twilight. Hotels all stand to benefit from such Instagram mentions, which translate into what is essentially free marketing.

There are, nonetheless, issues that need to be addressed when creating an outdoor space. For White Lodging, the partners of which include Marriott International and Hilton – and which has built nine rooftop spaces across its portfolio to date – weather should always be factored in when a designer begins work on a project.

“A designer must be aware of the region’s weather patterns,” Anderson continued. “Cold weather climates require extra attention. When the weather dips below 40°F, guests take cover, so we provide pits and enclosed areas to keep outdoors despite the cold temperatures.”

The simple transposition of a ground-level bar onto a roof space is also ill-advised for designers. “Rooftops are worth the investment, but you can’t apply ground-level thinking to the rooftop design and planning phases,” said Anderson. “You need to consider a number of new issues if you want to innovate and make the most of the trending allure of rooftop bars.”

Location is also crucial – especially in metropolises where skylines are forever in flux. “Creating a rooftop destination in a capital city with a constantly rising roofscape is not as simple as providing access and a few tables,” wrote Ashton. “The first hurdle is to find the right location: a rooftop that is clear and is free from overbearing neighbouring properties, including future developments.”

With the concept of the vertical city increasingly popular in certain parts of the word, especially Asia, it is likely we will see more urban hotels latch onto this trend for rooftop wining and dining. 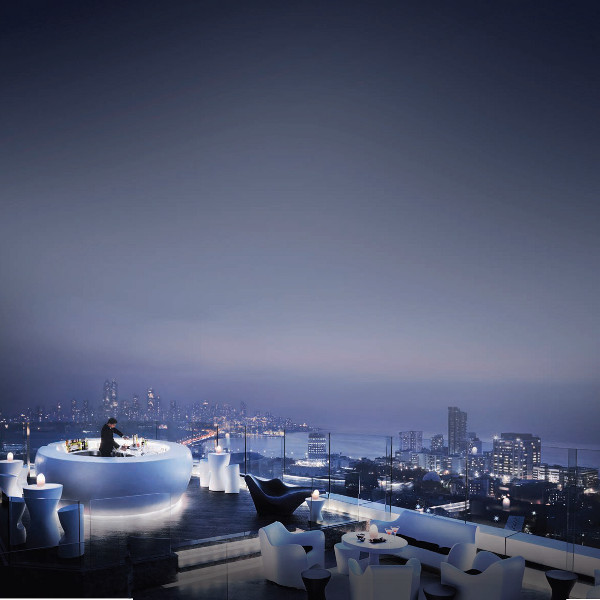 The Mumbai Four Seasons has one of the most dramatic rooftops in the world. 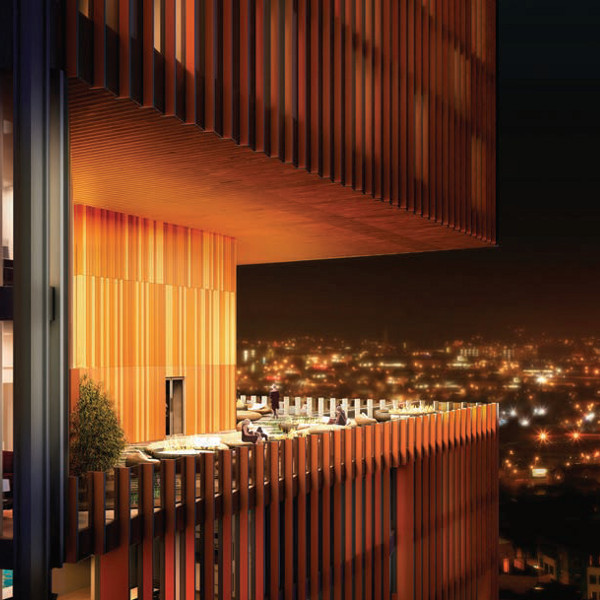 The luxury Manhattan Loft Gardens in The Stratford, East London, boasts a fine view over the Olympic Park and the city beyond. 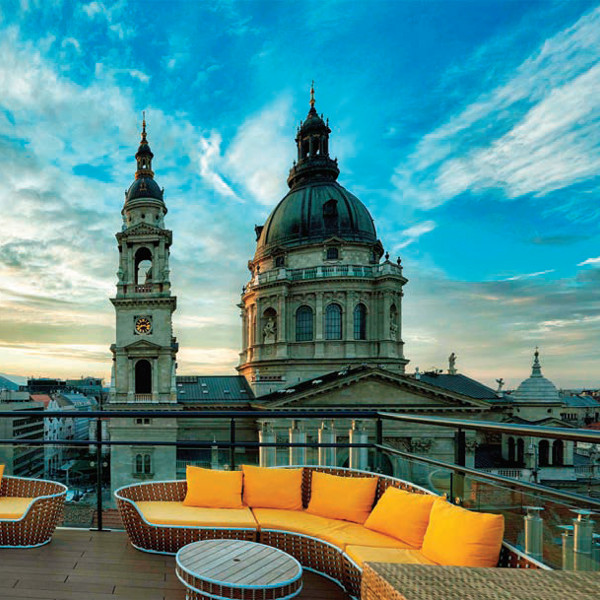