From Claridge’s to the Statue of Liberty restoration, Thierry Despont has never shied away from the ambitious. As he works on a cluster of high-profile hospitality and residential projects, the architect and designer speaks to Sarah Williams about the importance of marrying the two disciplines, bringing modern comfort to the grand dames of the hotel world, and how his tools as an artist help him give shape to his clients’ dreams.

"If you have a good partner or opponent, your games get better; you push them and they push you. If you have someone who doesn't know how to play tennis across the net, it's going to be pretty boring."

Thierry Despont isn't talking about life on the tennis court, although as the go-to architect when the world's most elite residents require a new home, he's probably built a few.

Instead, the sought-after designer is explaining the game conditions required for a productive collaboration with the owners of his other architectural specialism - very fine hotels.

"If you both know how to play, then the games get challenging and you push each other," he continues. "The result, hopefully, is the product of this tension."

With work-in-progress including renovating the Ritz Paris (its much-heralded reopening is scheduled for later this year) and near neighbour the Hotel du Crillon, due to reopen in 2017, the stakes are high indeed.

Despont, though, is uniquely qualified to mastermind the kind of sensitive and demanding projects that may cause less experienced practitioners to blanch. With a career spanning nearly four decades, including renovations for The Dorchester and Claridge's in London, Despont has made an art form of the palace-hotel renovation.

While preserving character is paramount, this must be achieved at the same time as a thorough modernisation of the hotel in terms of the technology and amenities that today’s guests expect.

Speaking from his New York offices a few days after returning from Paris, Despont explains that this process starts and ends with the property's cultural identity.

"All those so-called grand dames, they have a history and a personality, and that's something that I apply myself very much to preserve," he says. "So whether it's for Claridge's or the Ritz or the Crillon, I'm always very keen on keeping the personality, because I think, today, so many hotels, if luxurious, are bland architectural pieces where you don't really know where you are. You could be in Shanghai or in London."

While preserving character is paramount, this must be achieved at the same time as a thorough modernisation of the hotel in terms of the technology and amenities that today's guests expect: larger bathrooms and bedrooms, air-conditioning, Wi-Fi and electronic accessories. This often requires reducing the number of rooms in order to create bigger suites, redesigning the basic floor plan and completely remodelling the building to include the required technology.

"When it's done, if people go there and recognise it, then you've been successful," Despont says. "For example, if they go back to the Ritz, which will reopen in mid-2016, my hope is that people will say, 'Oh, it's the Ritz, it's better than ever, but what have you done?'"

While the final enhancements may appear subtle, the work undertaken is often far from minimal, observes Despont, whose early training at the École des Beaux-Arts in Paris makes his dominant eye that of a craftsman.

"It's not magic, it's hard work," he says, laughing fondly. "And often it's very expensive because it has involved totally dismounting everything and putting it back in a way that is more spacious, luxurious, more comfortable, but at the same time where the DNA and the soul of the place is preserved."

In achieving this, Despont's many years of specialism, and those of his around 50-strong team of associates, are essential.

"I have never done an office building, and I don't think I will ever will, nor will I ever do a hospital," he states. "But when it comes to hotels, we have learned much over the years: how does it function well in the back of house? How do you service the rooms? How does the kitchen work? How does the restaurant function, and what do you need in terms of food and beverage facilities?

"And then my historical architectural training bears to those projects. When I do the Ritz, which is a fantastic historic monument in itself, you have to know 18th-century panelling and French moulding as well as where the best fabric house is that can do custom fabric, so that this can be unique for each and every suite."

Despont applies this knowledge just as readily to his boutique hotel projects, such as the Chatwal's in New York. Here, Despont sought to root the hotel within its location by taking inspiration from US art deco.

Art of the craft

Just as Despont's practice draws heavily from his knowledge of beaux-arts, so too does it fuse architecture, design and landscaping, in a manner founded in tradition but rarely seen today.

This time-honoured approach extends to Despont's activity as an artist and sculptor. Affiliated with the Marlborough Gallery, he has exhibited in New York, London and Monaco, but swiftly bats away the suggestion that he is an 'accomplished artist', instead asserting how valuable this capacity is to him within his core profession and the interplay between the two.

"I am an artist, I am a good draftsman, and I paint and sculpt," he says "And the truth is that, yes, I am an architect, and a designer and an artist, but up until the 19th century, if you had met an architect who told you 'I don't paint', or 'I don't draw', you would have run away.

"So I think I am in the tradition of what architect-artists have always been up until this specialisation of the 20th century. In fact, it is to my great regret, the lack of beaux-arts education that you encounter today in architectural schools - that is, being exposed to drawing, draftmanship, sculpture and also music."

He adds, "When I paint, my use of colours in the painting will influence the pallet of colours I will select for a project. When I do a sculpture, the play of light on the sculpture is a reflection of what I've learned in architecture, how you can use the light to animate a volume."

Art is also a pleasure and an escape for Despont; a space in which he is free from the discipline that architecture requires.

"I call my studio sometimes my 'playroom'," he reveals. "Somewhere I can just go and let my imagination run wild."

Nevertheless, imagination and the ability to conjure the visions of others in his designs is key to Despont's winning approach, a skill he has perfected within the private-residential work that makes up the major part of his practice.

Just as Despont’s practice draws heavily from his knowledge of beaux-arts, so too does it fuse architecture, design and landscaping, in a manner founded in tradition but rarely seen today.

"When I do houses, I do my client's house, meaning they are all different; they have the dreams and memories of my clients, of houses or places they've visited or roots that they have, and dreams of how they see their house.

"A house is always first and foremost a portrait of its owner - not of the architect. And I love doing that, be it a neogothic house outside Toronto, a ski chalet in St Moritz, or a modern villa in Palm Beach - they are all different and I've learned from that what it is to work for and with the client."

Alongside these individual, turnkey projects are commercial projects, such as creating the interiors for Jean Nouvel's 53W53 residential tower (due to be completed in 2018), next to the Museum of Modern Art.

Also in New York, Despont has been working on a renovation of the iconic Woolworth Tower to convert the upper floors into luxury condominiums, scheduled for completion next year.

Built in 1913 and for 16 years the tallest building in the world, the structure is neogothic, but architect Cass Gilbert is best known for his beaux-arts style. This fact, combined with the acute knowledge of how people of means live that Despont brings, made him a natural choice for the project - and an enthusiastic commission winner.

To work on the revered building 30 years after his work as an associate architect on the centennial restoration of the Statue of Liberty, was hugely exciting for Despont as a French-American very fond of the city in which he lives and an admirer of Gilbert's work.

"I was really blown away by the skill and excellence of detailing that Gilbert and his team put into this building," he reflects. "And so it was very much a case of trying not to climb on the shoulders of Cass Gilbert, but at least to make sure that I understood his genius and pay homage to it."

With new high-profile projects following hot on the heels of the last, Despont is a man continually in demand, and accompanying the monuments he has transformed are the accolades he has attained - Knight of the French Legion of Honour and Knight of the Arts and Letters to name but two.

Despont, though, has no intention of slowing down. "It's a passion," he says. "I have been accused of being a workaholic, but I am not; I am a passionate man and I have been fortunate all my life to do what I love. Every day, I'm early at my office, but it's a pleasure."

Key to this, he emphasises, is the crucial role of the client as patron and trusting counterpart, inviting him to give shape to their dreams.

"They have the vision and the daring to entrust an artist or designer, and to trust that the result will indeed meet their expectation," he says. "I am forever grateful for the confidence and the trust that my clients allow me to express my vision as an architect." 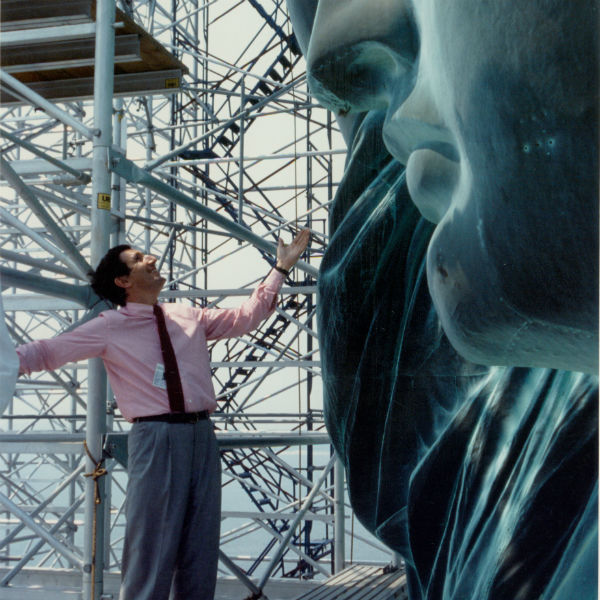 Despont at the centennial restoration of the Statue of Liberty. 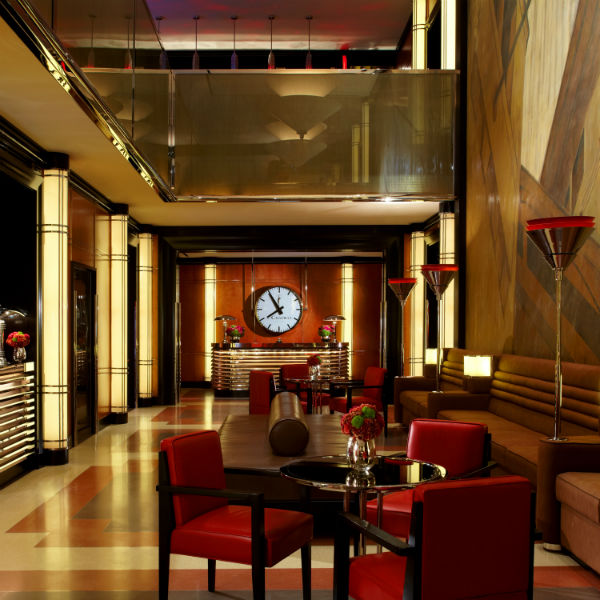 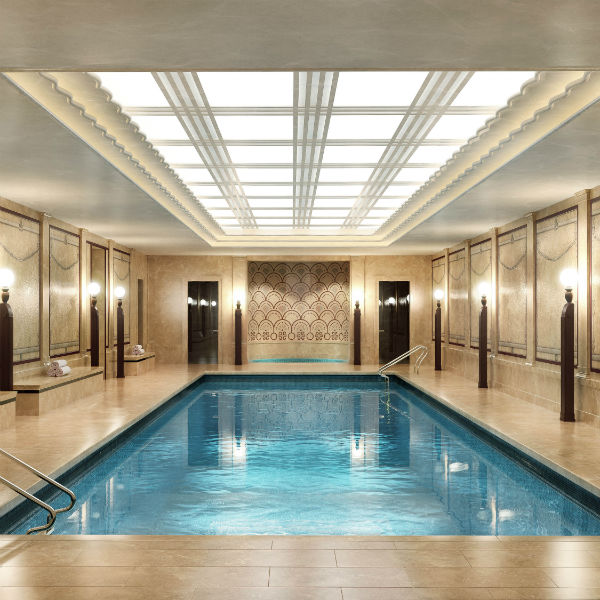 The pool at the Woolworth Tower, where Despont is converting the upper floors into luxury condominiums.
Post to: