Deloitte’s European Hotel Investment Conference encouraged delegates to consider the long view when it can be all too easy to become distracted by more immediate concerns. Hotel Management International travelled to the Dorchester in London to hear some of the sector’s biggest names debate challenges and opportunities coming over the horizon.

Deloitte’s 30th European Hotel Investment Conference (EHIC) may have invited delegates to “Experience the Future”, but, despite our best efforts, it can be difficult to see beyond the here and now.

“Since we gathered in London last year, the question I have been most frequently asked is, ‘are we there yet?’” commented Andreas Scriven in his introduction to proceedings. And by the end of the day, having heard from global CEOs, esteemed economists, investors, operators and Deloitte’s aforementioned head of hospitality and leisure, the truth was evident if somewhat frustrating: nobody really knows.

Counterintuitively, that is the problem with a booming market and sustained upticks; there’s always a nagging thought at the back of one’s mind – or at least there should be – that the party has got to end at some point. Consensus is hard to come by and where one thinks we are in the cycle generally comes down to where you are on the continent (and whether you generally consider your glass half full or empty).

In the 2018 Deloitte European Hotel Investment Survey conducted prior to November’s event, almost 50% of respondents said that the UK was at the peak of the investment cycle, while 25% diagnosed it as already experiencing a downturn. Greece, France and Spain, meanwhile, were all perceived to be on the upturn. All the same, London was still cited as the second-most attractive city for investment – behind only Amsterdam, which retained its number one spot from 2017. Spain might be looking good, but Barcelona had fallen down to sixth in the list. Clarity of any form was hard to come by.

As we have seen in later stages of previous cycles, Scriven also acknowledged, 2018 has witnessed the return of more exotic deal structures, which some investors see as unlocking previously untapped value, while others interpret it as introducing new, unnecessary risk to the market. Nevertheless, there remains a great deal of capital swashing about and pricing metrics have continued in an upward trend. Scriven foresaw a number of portfolios and single assets coming to market in 2019, events that would truly test the depth and strength of the transactional market over the coming months. Until then, we’d all have to guess and argue.

The hotel market has always been a long-term game, but it is these more immediate concerns that can bog down investors and distract their gaze from the bigger picture. Acknowledgement of the dangers of such a mindset prompted the 2018 iteration of EHIC to challenge its participants to think beyond those next few months and consider how the industry might change more permanently over the next five years and beyond. Technological advancements, fundamental demographic shifts, geopolitical trends and shrinking talent pools were all subjects open for discussion.

“Those who don’t look to the future and start preparing now face a significant risk of obsolescence and irrelevance as existing and new entrants look to disrupt the market,” Scriven cautioned the assembled delegates.

During a panel discussion on staying relevant to the guest, much of the debate surrounded how the ways in which operators view and leverage technology needed to change. “Everything comes down to RevPAR, but never to revenue per available customer,” said Julie Fawcett, managing director of Qbic Hotels. “Yes, we might hint at it, but we need to change our thinking.”

Karan Khanna, managing director for the UK and Ireland at IHG, argued that new platforms had a significant role to play in delivering growth in that area, though the fundamentals of what equated to a good hotel experience would remain in place.

“That will come from customer service and experience,” he said. “Of course it is absolutely mandatory for brands to invest in IT, and it has been this way for quite some time. It is non-negotiable for us to invest in our own infrastructure, but the challenge is keeping up with the pace of change. And then you can start to focus on what unlocks value, and do that for 5,500 hotels, not just the 15 launched that month.”

Elsewhere, a panel titled 'Workforce 4.0: Empowered and agile' sought to tackle recruitment challenges, particularly the acute gender disparity evident in the higher echelons of the industry.

“If it is only women talking about women, then that’s a problem,” said Julia Ingall, chief people and culture officer at Ennismore. “I am an employee first, a woman second. It is incumbent to go out to schools and show everyone that everyone is capable of anything.” Looking at the difficulties of recruitment more generally, Kate Nicholls, CEO of UKHospitality, argued that the segment sometimes ran the risk of talking its prospects down and overstating the extent of a skills shortage.

“What we have is a labour shortage,” she countered. “60% of our workforce is under 24, and there is a record level of employment. We do not have a skills shortage in the industry because you can train [anyone to do] anything.”

Other sessions included presentations from STR managing director Robin Rossmann and the founder of TW Consultancy Trevor Williams, as well as panel discussions on the investment opportunities of tomorrow and future consumer trends.

View from the top

The blockbuster ticket, however, now a firmly established highlight of this annual event, was “view from the top”, which traditionally sees Scriven in conversation with a global hotel leader.

This year, delegates got two for the price of one, with both IHG CEO Keith Barr and Federico J González, president and CEO of Radisson Hotel Group, taking to the stage. From Brexit to Trump to trade wars, the chief executives agreed that a major challenge for anybody making key business decisions on behalf of a multinational operator was to cut through all the distractions and attempt to see the bigger picture.

“It would be easy to convince yourself not to get out of bed in the morning with all the noise out there,” said Barr. “You have to be intelligent as to how you go forward, but do not be paralysed by the noise.”

And the bigger picture, as far as Barr can see it, is one of dramatic transformation already under way and rapidly gathering pace.

“A lot of what underpins our conversations internally are these great demographic shifts taking place,” he revealed. “50% of the world is now middle class. The middle class in China outnumber the entire population of the US. That’s what will shape our industry moving forward and it’s what will enable the big hotel groups to get even bigger.

“It’s a question of getting into the right markets at the right time. The growth of wealth in emerging markets will dictate events for the next ten to 20 years. To be completely honest, I don’t know whether we, as an industry, are quite ready for it yet.”

González, who worked in the consumer goods sector prior to entering the hotel market, agreed that new wealth was already having a dramatic impact, arguing that an unprecedented ability to get close to the guest, delivered by technology, could help operators fully benefit from opportunities arising from such a shift.

“The question is that, with the global population getting wealthier, how can hotels and brands satisfy that increase in travellers?” he began. “As an industry, for many years we have survived on out of date technology, but we now have much more direct contact and that allows us to do many more things. We must create brands and experiences that speak to these groups.”

Back office investment has also been necessary, he continued. “We are spending a lot of money on property management systems and reservation systems,” González said. “There is a huge effort on technology to make sure all these systems travel fast across your portfolio to increase operational efficiencies, all before you even go to your consumer with technology.”

One tech-savvy group that has generated much excitement in recent years is the much feted millennial, with an unprecedented number of new brand launches and guest concepts introduced that have sought to speak, in some cases exclusively, to a demographic upon whom so many hopes have been pinned. Both leaders agreed, however, that much of the industry had failed to appreciate that they should be targeting a mindset which, in many cases, transcended generation.

“We misplayed the whole millennial card for too long,” Barr acknowledged. “They now have kids and a mortgage. Designing a brand around a generation is certainly not the way to go.”

González reflected upon the Radisson Red brand he inherited upon his arrival at RHG. “People kept telling me it was all about millennials, but they were less able to say exactly what that meant,” he explained. “It was confusing to me and that means it must be confusing for the consumer. “Ultimately, what that brand stands for should have wider appeal than only to one age group and you must be able to articulate what that is and what differentiates it.”

Clarity was a theme both executives turned to time and again, though both agreed that delivering such a message was challenging when being buffeted by events thrown up in day-to-day operations across a global footprint.

In fact, the sheer unpredictability of geopolitical and socio-economic developments over the last few years have arguably made forecasting across longer time periods less of a challenge than trying to predict in the short and medium terms. Attempting to foresee what will be up for discussion at EHIC in 2019 is therefore unadvisable, but we should at least be better positioned when it comes to gauging where we currently sit in the investment and performance cycles.

Whether everyone can agree on what that will mean for the market as a whole remains to be seen. 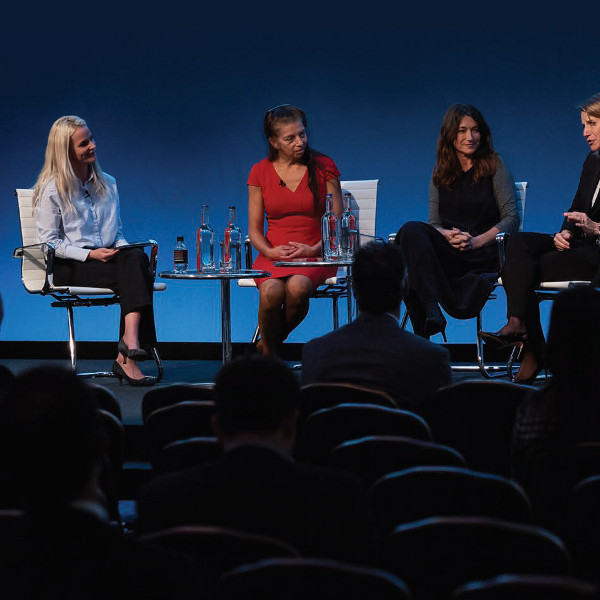 The panel debated gender disparity in the upper echelons of the industry in a talk entitled ‘Workforce 4.0: Empowering and agile’. Andreas Scriven, Federico J González and Keith Barr were among the industry experts in conversation at the 2018 event. 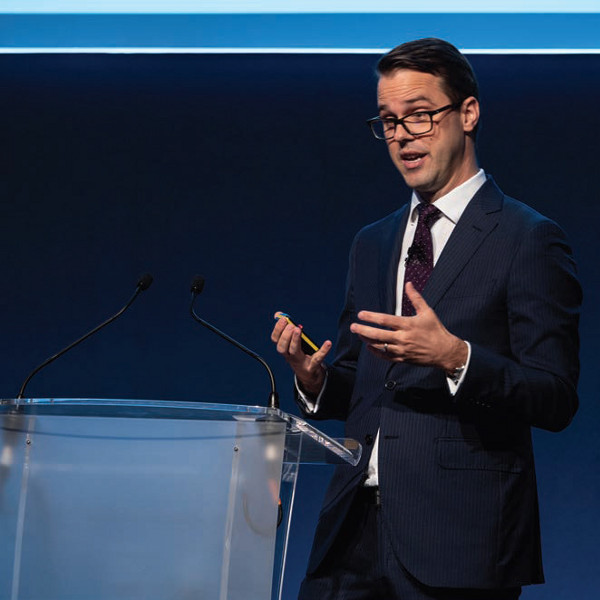 Andreas Scriven addressed the audience with a speech highlighting the importance of hoteliers planning for the future, or they risk losing their position in the industry.
Post to: