The age of automation – technology and the hospitality industry

With next-day delivery and smartphones now ubiquitous, the time has come for the hospitality industry to fully embrace automation. However, recent examples have proved that operators often struggle to thread the needle between utility and novelty in this area. Greg Noone talks to Steve Cousins, CEO of robotics firm Savioke, and Mamie Peers of The Cosmopolitan Hotel in Las Vegas, about finding the right balance.

The robot velociraptors were offline when Steve Cousins arrived at Henn na Hotel. An engineer by trade, Cousins was now the CEO of Savioke, a manufacturer of robots for the hospitality industry. As such, he was surprised that these particular dinosaur replicants were not plugged in and ready to go.

Unfortunately not, replied an unmistakably human staff member; check-in was at three. Until that hour, the saurian greeters, claws raised and jaws agape underneath their bellhop hats, would sit in silence.

The Henn na Hotel in Nagasaki, Japan, is the most extreme example of automation in the hospitality industry. Almost every service on the premises is either performed by a robot or assistive technology. From the artificial concierges behind the reception desk – the velociraptors are joined by a plastic female android that caters to Japanese speakers – to the porters that glide along the hotel corridors and the facial recognition software that operates the doors, the Henn na Hotel is intended to be the blueprint for a future where operators need not rely exclusively upon human members of staff to fulfil the needs of their guests. And then there’s Chu-ri-chan, the tiny artificial assistant that sits on the guests’ bedside tables.

“It was this little thing that sat on the desk and talked to you,” says Cousins, who remembers the robot greeting him in Japanese as he entered his room. He felt unnerved. Aside from the fact that an unfamiliar voice had announced itself from across the room, Cousins wasn’t sure whether or not the robot’s tiny eyes hid cameras. After turning it round to face the wall, he went to bed. At 3am, Chu-ri-chan called out again. ‘Nan desu ka?’ it chirped, loudly enough to wake Cousins with a start. Apparently, the businessman had been talking in his sleep.

Cousins looks back on his trip to the Henn na Hotel with mixed feelings. Although impressed with the management’s enthusiasm in trying to experiment with as many technologies as possible, he was less satisfied with the hotel’s attempts to sustain a personal connection between guests and its robot members of staff.

As far as he is concerned, an automated service works best when it begins by servicing a basic need in the most unobtrusive way possible, which, in Cousins’ mind, would preclude the need for a personality. In other words, the future of robotics has more in common with a Roomba than C-3PO.

It was this philosophy that led Savioke to develop the ‘Relay’, designed to be the world’s first robot butler. The machine – the appearance of which could be compared to an upturned pint glass or a futuristic wheelie bin – is designed to autonomously carry small items between the reception area and individual rooms. According to Cousins, the robots are already proving popular among guests and staff. “Interestingly, the staff and the management absolutely love it,” he says. “We have one video of a general manager from Residence Inn who offered to be on camera and talk about [the Relay]. He just goes on and on about the value that it brings to the hotel.”

Not only that, but the Relay has breathed new life into more traditional aspects of the hotel stay. Ordering room service, for example, has never been easier. Any lingering anxiety about tipping – or, Cousins points out, remaining clothed –  is eliminated without the arrival of a flesh-and-blood member of staff. In fact, guests are statistically more likely to order room service if they know the hotel they are staying at is staffed with Relays. What’s more, they seem to respect their new robot overlords. “We’ve had a lot of time in the field, and nobody’s tried to steal one,” says Cousins. “We’ve had a couple of people – drunk guests – knock it over, but then they pick it back up again.”

As with any new technology, there have been teething problems. Individual Relays navigate a hotel’s corridors and lifts by interpreting a complex amalgam of LIDAR, sonar and 3D-vision data acquired during an initial training period, where the robot effectively maps routes through the building. Nevertheless, a workaround had to be conceived after problems arose at a hotel where the doors opened outwards, which made it more difficult for the robot to work out where it should stop to wait for guests to retrieve their items. Carts were another unanticipated obstacle. It was found that the Relay’s navigation algorithms didn’t imbue it with enough confidence to squeeze through the available gap between carts, temporarily left in the corridors by cleaning staff, and the wall.

Now updated, Relays can sidle through with ease. Indeed, any kinks that remain in the system now tend to benefit instead of bedevil the operator. “We found that we can often tell the hotel when their elevator’s broken before they know, because either it doesn’t come and we’ve having trouble getting our deliveries, or because they’re not level,” says Cousins.

Lead from the front desk

For operators, the idea of hotels staffed by robots is intended not only to alleviate the social anxieties of guests – the better for them to partake in the kinds of premium services that would normally be off-limits to the shy and retiring – but also to cut costs.

Yet, clearly, hotel operators are not averse towards exploring how the robotic can enhance the personal touch, and that experiment almost always starts behind the check-in desk. It’s why the Henn na Hotel invested in a velociraptor in a bellhop hat, and it’s why the Ghent Marriott acquired Mario, a small humanoid robot capable not only of checking guests in but also welcoming them in several different languages. In March 2016, Hilton announced a pilot project to develop ‘Connie’, a 2ft high android, in collaboration with IBM. Able to interpret and respond to human emotions, both firms were confident that guests would have a conversation with Connie and leave with a better understanding of what they had wanted to know. The project has since concluded.

Meanwhile, an alternate approach is currently being trialled at The Cosmopolitan of Las Vegas. Upon entering the hotel’s reception area, select guests are handed a business card that reads, on one side, ‘I am the answer to the question you never asked’. Turning the card over reveals a phone number guests are instructed to text with any queries about local attractions and in-house amenities. On the other end of the line is ‘Rose’, a chatbot developed by The Cosmopolitan in collaboration with Chicago-based software firm R/GA.

“A lot of our guests text-messaged us already, or we texted them to let them know when their room was ready,” says Mamie Peers, the hotel’s digital marketing manager. “Expanding that into a personality unique to The Cosmopolitan that’s available via text, to help guests have a better time when they’re in Las Vegas, made a lot of sense.”

Much hay has been made about Rose’s unique personality. According to Peers, she’s quick-witted, savvy, flirty, charming, inspirational, creative, confident and a little mysterious, all qualities that had been agreed between The Cosmopolitan and R/GA prior to the coding process. Then, both parties had to decide on appropriate trigger words to activate Rose’s emotional responses. “She uses phrases like, ‘Excite me’ for things that are beyond food or beverage,” explains Peers. “[Text] ‘play time’ and then you can get games and sports bookings, and casino details. So, her trigger words are fun, and that’s just one way we tweaked her tone to be more ‘Cosmopolitan’.”

Put the service to the test

The guests, for the most part, seem enthused. “I work in the travel industry, and I’ve not seen or heard about anything like this,” writes ‘TheTravellingPress’, a Level 4 user on TripAdvisor. “[O]nce she even texted me with an offer on bottomless mimosas.”

According to Bailie P, resident of Springfield, Missouri, and a fellow Level 4 contributor, “The Rose system was a great and effective way to request housekeeping services, and the restaurants on property were great. We will be back.” Another user – a Level 5 contributor from Salem, Oregon, – was less persuaded, recounting an episode where he had texted Rose about bathrobes that barely fit his 6ft high, 195lb frame and a minor complaint about her having to be chased to make a bill adjustment.

That in itself alludes to Rose’s limitations; like many chatbots, once a request is deemed too complicated for its core programming, it shunts the task to a human operator, who, in that case, may be unavoidably busy. It’s an occupational hazard, and an understandable one, but one that may become less so as chatbot technology evolves. After all, conversations about robots in the hospitality industry carry a lingering assumption that, one day, they’ll replace paid human staff. This is not, however, the intention behind Rose.

“Our objective was always to grow, build and serve,” says Peers. “It’s not to reduce or cut. That’s not the emphasis with Rose. It’s to serve the guests better, more quickly, and to give them the information that they’re looking for in a medium that they are comfortable with and appreciate.”

It is hard to see why guests wouldn’t. Anybody who owns a smartphone or uses an internet browser will confirm that they’re comfortable with iterative and predictive software, and while it may feel like a new technology, chatbots already find roles in everything from personal banking to counselling services. The difference is perhaps starker in robots, which already assemble our cars, clean our rooms and are only a few steps away from fighting our wars. Their continued evolution is just the latest symptom of the broad arc of economic development, which has expressed itself in automation since the first wheel rolled along a dirt track. In that sense, the hotel industry has a lot of catching up to do. From the top: the Relay is capable of delivering requested items to a guests room autonomously; Steve Cousins stands by his product. 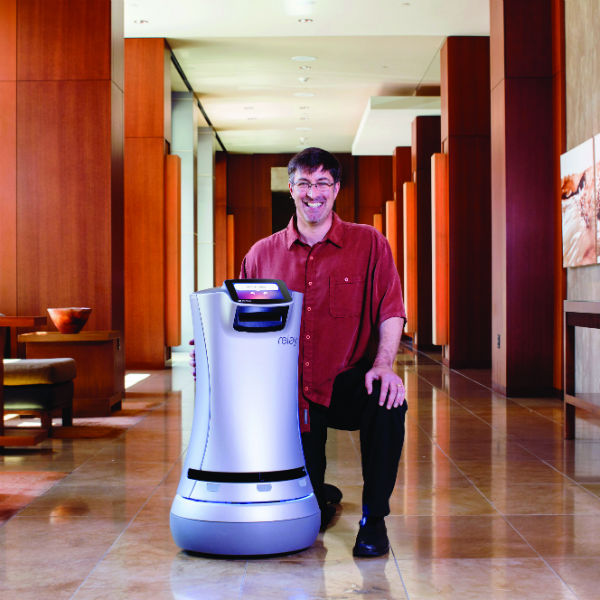 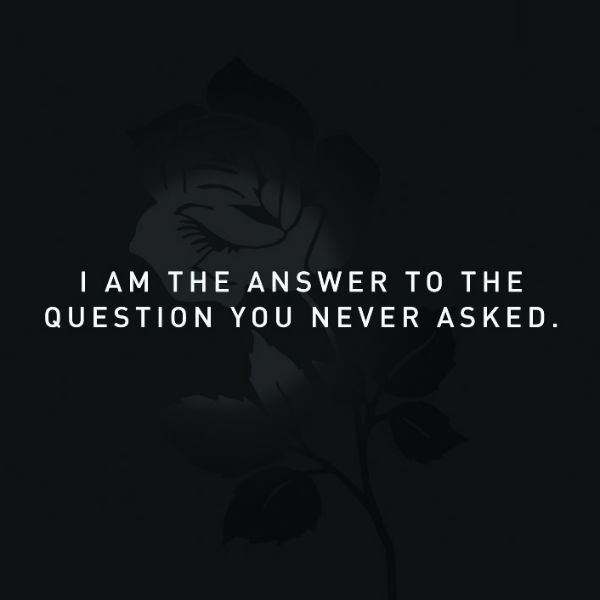 The Rose card is given to guests at The Cosmopolitan in Las Vegas with a number guests can contact for automated recommendations.
Post to: