Steady as she goes – the Middle East and North Africa

After a turbulent year for the hotel market in the Middle East and North Africa, investment remains high. Eleanor Wilson meets Dr Martin Berlin of PwC, Marko Vucinic of Jones Lang LaSalle and Marriott’s Samir Baidas to find out who is leading this growth and which markets to watch.

Even the most stable markets are bound to wobble in a year like 2016. As oil prices fell and the US dollar rose, more than a few with their eyes on the Middle Eastern hotel market began to feel anxious. Continually dicey political situations in certain regions took their toll as well. But at least some of the doom and gloom was unwarranted: the dip in performance does not look set to become a downward slope and development continues apace.

STR data reveals that the Middle East, overall, recorded a 2.0% drop in occupancy to 66.2% last year, while ADR took a dive of more than 7.0% to £174.60. Africa was hit harder, with occupancy down 3.6% to end the year on 55.4%. Saudi Arabia suffered particularly, with RevPAR dropping 8.5% – but in the UAE, demand growth outstripped supply for the first time in three years.

“The industry remains robust,” says Dr Martin Berlin, partner and leader in real estate, hospitality and leisure for PwC Middle East. “Any decline in industry performance in 2016 was due to transitory factors, rather than a shift in fundamentals. Therefore, the future looks bright and promising.”

“Over here, everything is still development-driven; there are limited investment transactions, the ones you would see in the Western markets,” he explains. Despite the potential for higher returns in the Middle East, Western investors on the whole still prefer to buy operating assets in stable markets that yield immediate returns and demand a lower initial investment.

“The challenge is that the development trends in this region have been traditionally focused towards developing over-specified products, meaning that investment costs are higher than the actual ROIs. However, we see this changing going forward,” says Vucinic.

The impact on ROI of this combined with a decline in year-on-year trading performance makes it difficult to sell an operational hotel in the Gulf Cooperation Council (GCC). “International investors are exploring the market with cautiousness and a close estimation of the regional risk profile that might lead to a mismatch between expected and actual returns on hotel investments,” says Berlin.

Berlin sees a bright future ahead for private investment in Saudi Arabia, which was outpaced only by the UAE last year.

“Saudi Arabia is undertaking a massive economic diversification drive to encourage private-sector participation that will encourage travel to Jeddah and Riyadh,” he says. “Once the ongoing expansion of the Haram is completed, Mecca will be able to accommodate more hotels and hotel apartments.”

Middle Eastern developers, slightly spooked by oil prices, are more return-focused than they once were. Vucinic says experience, strong distribution, long-term commitment and brand awareness are key factors when they choose their partners. “However, it’s not the only factor,” he says. “Sometimes, the owners look at the ‘innovativeness’ of the product as well as the flexibility of the operators.”

"Owners tend to prefer “interesting brands with a unique product offering,” he adds.

Samir Baidas, chief development officer of Middle East and Africa for Marriott International, concurs: “We’re looking for someone who’s done the business before. They’re really cautious with spending. We’re seeing a lot of new partners who are focusing heavily on ROI, and that makes life a lot easier for us in the future.”

This intensity of focus on ROI means owners are becoming more involved in attracting staffing talent. Keen to get off the ground fast, they are no longer happy to attract and train staff from overseas; luxury owners are now looking to hire fully trained local managers who are at home in the culture. Having previously poured its efforts into educating Middle Eastern developers on the hospitality industry, Marriott is now working on human resources and training programmes.

“One of the things that we never used to negotiate heavily is GM candidates – how would the owner interfere in GM candidate negotiation? Now we’re seeing a lot of pushing with regard to talent,” says Baidas.

Marriott has taken on several new brands over a variety of segments with its recent acquisition of Starwood. Initially, there were fears that the increase in the group’s size would, in the short term, drive investors to smaller operators who would otherwise be lost in the shuffle. Flexibility is essential when dealing with MENA developers, Baidas says, especially in Africa – to cut deals and build relationships.

“We need to give a lot of face time; we need to understand the culture and geography. If I want to do a nice five-star hotel, I’m not going to expect that the owner will be able to give me the infrastructure to serve smoked salmon on a daily basis,” he explains.

But, Baidas says, the Starwood merger has not put developers off – quite the opposite, in fact.

We’re seeing a lot of internal leisure travelling within the GCC, especially to the UAE, Kuwait and Qatar.

“Since we took over Starwood, we’re receiving a lot of leads from owners who are trying to finalise deals with other competition,” he reveals. “They started to see that, with this scale, they will be able to get a lot more leverage than working with small players.”

High land prices and a lack of private-land ownership have resulted in a market that rewards luxury developments over all else, with more than 50% of the current supply positioned in the four and five-star segments. However, Doha is diversifying its leisure offerings as the city prepares to meet demand during the 2022 FIFA World Cup, while Dubai is similarly focused on the groundwork for Expo 2020. The balance is beginning to tip towards the mid-market.

“Dubai, with the upcoming Expo 2020, and significantly improved leisure and entertainment product offerings, looks well poised for growth,” Berlin says, referring to the Dubai Parks and Resorts opening late last year. He is confident that the UAE will continue to be the strongest developing market. Dubai maintained 80% occupancy and an ADR of $250 over 2016, while Ras al-Khaimah and Abu Dhabi maintained occupancy above 70%.

“Expo 2020 definitely has an impact on the development market, because in order to cater for such an event, there are a significant number of hotels that need to be delivered, and developers are focused on that as well as the local authorities,” confirms Vucinic.

“We’re seeing a shift in our markets, heading towards upper scale. We’re looking at a lot of opportunities right now in the four-star sector and even in the three-star sector,” says Baidas. He taps Courtyard by Marriott and Four Points by Sheraton, as well as lifestyle brands AC by Marriott and Aloft, as the major focus for mid-scale in the Middle East.

“We’re not going to go for luxury, definitely. We might start with the mid-tiers, like the Courtyard and the Residence Inn,” says Baidas of Marriott’s plans to embrace the ‘manchise’ trend. “Even in Europe, we don’t [franchise] a lot of luxury hotels, and we’re monitoring how this would work before we start entertaining [the idea] in the Middle East.”

One of the group’s recent success stories is positioned in the extended-stay segment. Residence Inn, which offers minimal food and beverage, and does not serve alcohol or pork, is gaining wide popularity as a sharia-compliant brand.

“There’s a lot of appetite, especially from Kuwaiti and Saudi investors, to go outside Saudi Arabia and Kuwait [with Residence Inn],” says Baidas.

A change of gears

A shift to mid-market seems timely, given that the falling euro and British pound currently make travel to the GCC less affordable for key European source markets. At the same time, the growth of inexpensive air travel within the region has MENA source markets on the rise – particularly Saudi Arabia, due to its robust transport infrastructure.

“We’re seeing a lot of internal leisure travelling within the GCC, especially to the UAE, Kuwait and Qatar. We see a huge demand in groups – Ras al-Khaimah is increasingly group-driven,” says Baidas.

Security concerns have also factored into many Europeans’ decisions to holiday elsewhere. But North Africa, specifically Egypt and Morocco, is beginning to bounce back. According to Vucinic, this is largely due to corporate travel and tourism from within the GCC. Tunisia and Egyptian resort destinations have yet to feel the same benefits due to travel bans, regional competition and security concerns.

Berlin taps Cairo as a market to watch while Vucinic says he has seen “enhanced activity” in Oman, where proximity to the Indian Ocean provides plenty of opportunities for leisure development.

“Year-end 2016 RevPAR in Cairo increased by approximately 60%, signalling a return towards normalcy. This will certainly have a positive impact on investments in the near future,” says Berlin.

Meanwhile, Vucinic says India and China are picking up the slack as international source markets. “Asian guests still come to enjoy beach destinations; however, they spend less on F&B, and they tend to circle around the city more than actually stay in one place. So that’s one of the specificities that hoteliers need to adjust to.”

Vucinic and Berlin are tight-lipped on the topic of Iran, due to US sanctions that prevent PwC and Jones Lang LaSalle from operating there – though Vucinic calls it a market with “large untapped potential”. There has been a fair amount of buzz as the troubled region prepares to once more open its doors to the world. Last year, AccorHotels announced plans for up to 100 Iranian properties, and Meliá Hotels International recently signed a deal to build a 319-room property by the Caspian Sea.

Marriott, however, is proceeding with caution. “We’re waiting until the whole world starts opening up to Iran – we’re not making any moves yet until they give us the green light,” says Baidas.

After a turbulent year, optimism remains the predominant mood for operators and investors in the MENA hotel industry. With the benefit of several years of experience and confidence, the market has shown that it can survive a downturn – and going into 2017, it looks set to remain healthy as it continues its journey towards stability. 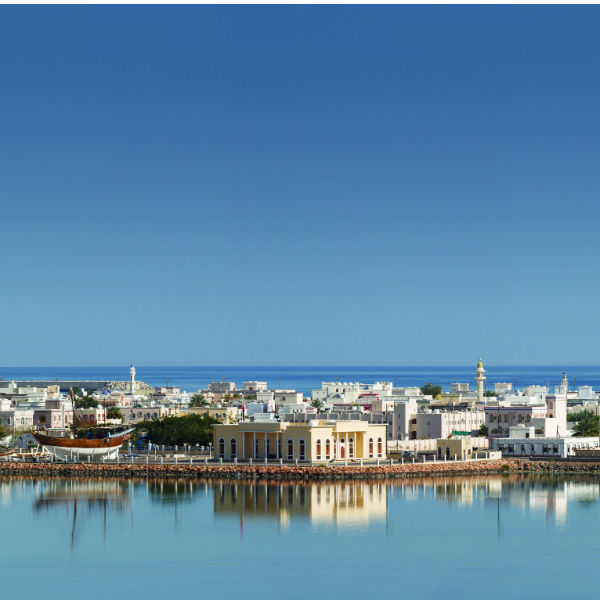 Oman: proximity to the Indian Ocean provides plenty of opportunities for leisure development.
Post to: