A number of high-profile terrorist attacks on hotels have left many guests increasingly
concerned about security, which is becoming an important consideration when booking
destinations. Colin Castle speaks with Paul Moxness, vice-president of corporate safety
and security at Carlson Rezidor, along with consultants Mac Segal and Bill Nesbitt,
about the precautions operators should be taking to keep customers at ease.

Are hotels safe? They’ve certainly long been targets for terrorism, from the events of October in Las Vegas to attacks by Islamist groups on big-name brands in Asia, the Middle East, Africa and Europe, there’s a sense that many need to be doing more to beef up security and keep a closer eye of who is going in and out of their properties.

It’s undoubtedly playing on guests’ minds. A PwC report from 2016, for example, said security concerns had resulted in mixed returns for some European destinations, despite the industry’s overall growth.

When one looks at RevPAR growth since September 2008, Paris (1%) and Brussels (-8%) are the worst-performing capital cities in Western Europe, numbers that one can tie directly to high-profile terrorist attacks in recent years.

But counter-terrorism recommendations often fly in the face of the traditional values of hospitality, and as hotels increasingly seek to be seen as open and community-oriented spaces, turning the city-centre hotel experience into something akin to airport security – complete with retina scanners and x-rays – doesn’t seem like the best solution.

One of the biggest transformations in hospitality in recent years has been technology: guests can increasingly use mobile phone apps to book their stays, check-in, tweak their room’s climate to their liking, and, it seems, keep themselves safe. Innovations in card technology, too, mean that suites can be kept more secure than ever.

“Door locks and card keys are more sophisticated, with most doors not even having a manual system anymore,” says Mac Segal, head of hotel and fixed site security consulting at corporate executive protection company AS Solution.

“Having your room key on your phone through the hotel app is already in use and will become commonplace.”

Some caution, however, against an overreliance on these tools in protecting guests. While technology can improve security and make operations more efficient, none of that matters if staff don’t know how to act in an emergency.

“How it is applied, maintained and operated will influence the outcome, and people are needed to take those decisions,” argues Paul Moxness, vice-president of safety and security at Carlson Rezidor. “This is another reason why we say that maintaining high levels of security is fundamentally dependent on people.”

The emphasis, instead, should be on the importance of investing where it really counts, and one issue is that hotels might not be spending money in the right areas.

Operators will drop hundreds of thousands on technology, but may neglect the importance of personnel and the value of labour in keeping a property secure.

“No camera has ever stopped a gunman,” Segal says. “Only properly trained personnel can keep people safe in the event of a hostile incident; they can control and contain the damage, not cameras. The biggest issue of hotel security in the past, which continues today, is that hotels invest in physical and technological things such as CCTV, alarms, fences and gates, and so on, but not in employing quality staff.”

Adequate education of workers, then, is essential. All employees, Segal argues, from general managers to back of house, must undergo training in suspicious indicator identification and emergency response procedures.

“Mantras like ‘see something, say something’ are only effective if people have been taught what to look for and who to tell,” he believes. Bill Nesbitt, president of Security Management Services International and a consultant frequently called on upon to comment on security in hotels goes a step further.

“We must recognise that employees who are not asked to become engaged may very well become part of the problem, especially in the back of the house,” he says, arguing that well-trained staff can enhance the efficacy of in-house technology.

“The effective deterrent impact of electronic security systems and security personnel may be improved by as much as 50%, and more, if all employees are participating.”

The events of the mass shooting in Las Vegas in October led to a great deal of international media attention on how hotels kept guests safe. How, many asked, was a shooter able to bring a military-style arsenal into the Mandalay Bay, and why did it take so long to stop him?

While Segal acknowledges that a reassessment of hotel security in the aftermath of the attack is without doubt beneficial, he warns against seeing it as model for the mistakes that the hospitality industry might typically make.

“The hyper-focus on hotel security that has resulted from this incident is a good thing as hotels are soft targets and more effective security is most definitely needed,” he says.

"The Las Vegas incident is not the quintessential case study for a hotel-attack scenario.”

“It is important to remember that the Las Vegas shooting was not an attack on a hotel; no guests were injured or threatened.”

Nesbitt disagrees, arguing that the tragedy ought to make many in the hospitality business reassess their attitude towards security.

“In part, the discussion in the episode centres on the discussion of how the perpetrator was able to amass so much firepower, undetected by the security team, and the question of whether this omission rises to the level of negligence.”

Heightened vigilance, Nesbitt argues, would be prudent. Much of this, however, comes down to the old debate between freedom versus security, and how much the threat of attack really looms over the hotel industry.

It’s important to maintain a sense of perspective: statistically, you’re more likely to be struck by lightning than be killed by terrorism, according to the World Economic Forum.

Moxness, for one, argues that it isn’t an either/or choice. “Privacy is, of course, critical, but privacy without security is meaningless,” he says. “I think the main tool in balancing privacy with security is maintaining a keen sense of awareness, and vigilance.”

Moxness believes it comes back to the theme of the importance of the role of all hotel staff in enhancing security.

“Operating across all areas of the hotel, the staff will be the first to notice if something is untoward,” he says. “With awareness training and experience, it also becomes an integral part of hotel security.”

As the industry faces increasing competition from new models of hospitality, such as Airbnb, many have sought to become more integrated into their local communities, hoping to shed stereotypes of being closed spaces that are more focused on isolating themselves from their surrounding area than finding ways of letting it in.

CCTV does not stop an attack, it simply records; however, the public expect to see cameras, as they make them feel safe. There is a huge difference between feeling safe and being safe.

With security increasingly front and centre in many guests’ concerns, however, can hotels really afford to be as friendly and welcoming as they’d like to be? Segal isn’t so sure. “Hotels should be cognisant of who comes in and out of their property,” he says. “One of the golden rules on security is to stop the threat as early and far away as possible.

"To this end, identifying a potential problem when it enters a property can serve to shut down a potentially hostile situation before it begins.”

Much of this also comes down to expectations – and corporate culture. With so many arguing that an emphasis on training should be the main priority, guests may just have to get used to what will increasingly become commonplace.

“Think of airports,” argues Segal. “Before 9/11, no one would have been willing to stand in a line for an hour waiting to be screened, but now it is perfectly acceptable.”

The real challenge for hotels, he says, is balancing perceived peril against actual threat.

“Ultimately, CCTV does not stop an attack, it simply records; however, the public expect to see cameras, as they make them feel safe,” he says. “There is a huge difference between feeling safe and being safe.”

Feeling safe is clearly something that concerns travellers. A report this year by ITB Berlin, one of the travel industry’s biggest trade shows, said that out of 6,000 people surveyed, 97% said that security was a consideration when booking a holiday. It seems likely, then, that more cooperation in best practice is on the horizon.

“We might also see a shift towards international industry standards for safety and security that can be independently audited and certified,” says Moxness.“We have seen this for many years in other industries, so it is likely hotels will follow suit.” 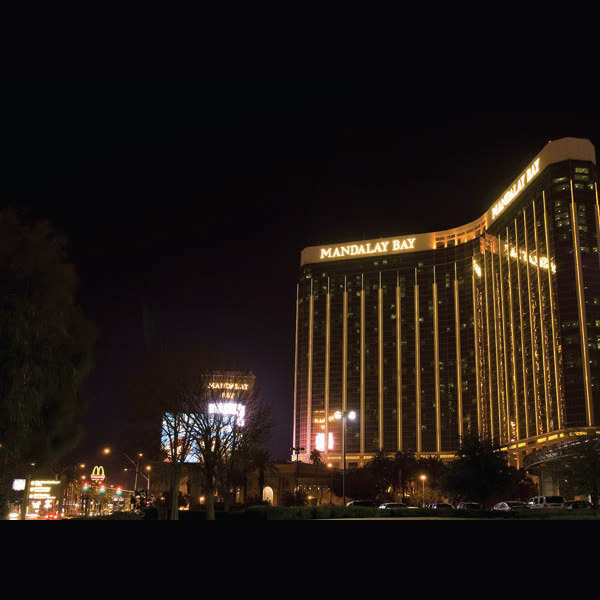 In the wake of the Las Vegas shootings on the night of 1 October 2017, questions have been asked as to how Stephen Paddock was able to smuggle a large arsenal of weapons into the Mandalay Bay hotel, and, once he'd opened fire, why it took so long for him to be stopped. 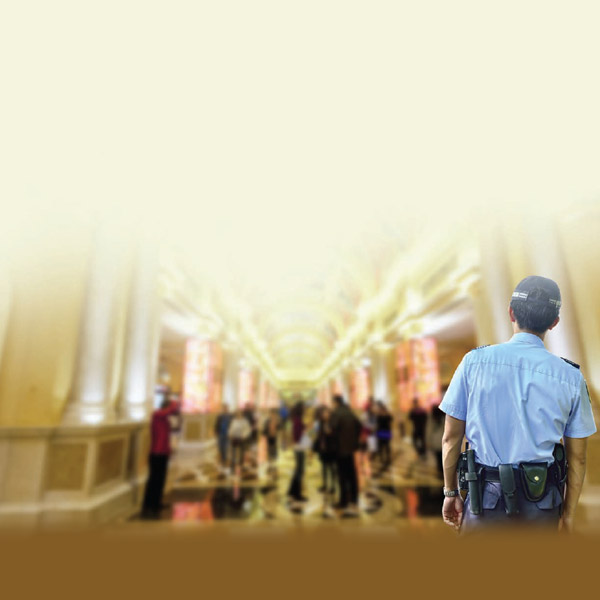 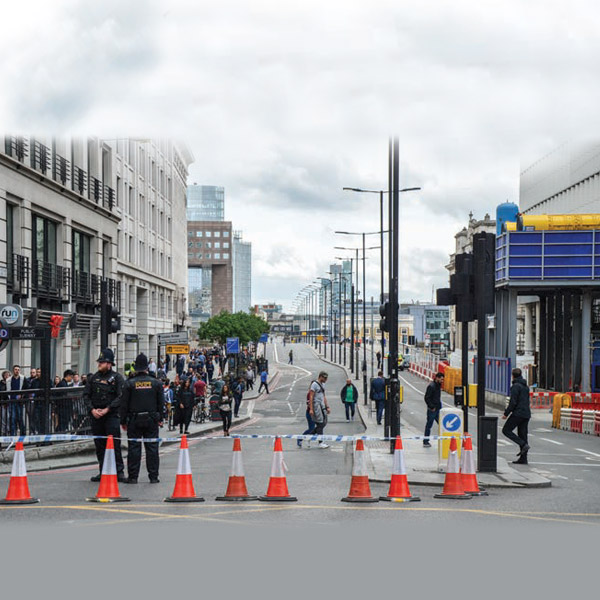 Terrorist outrages, like the London Bridge attacks in June 2017 that killed eight and injured 48, have made safety uppermost in many guests' minds when seeking somewhere to stay, and visible security measures in properties are increasingly important to their sense of well-being.
Post to: