In a little over a year in charge, Deutsche Hospitality CEO Thomas Willms has launched one brand, acquired another and now has his sights set on transforming the group’s flagship offering, Steigenberger Hotels & Resorts. He tells Phin Foster about the importance of leveraging one’s heritage, the transformative impact of entering the conversion space and why Deutsche is willing to bet big on the economy segment.

Sitting down with a chief executive who has been in the role for a little over 12 months, one might expect the conversation to be rooted in the here and now – achievements, priorities, innovations and transformation.

This is especially true when the CEO in question has managed to introduce two new brands during that brief period. Here, one might assume, is an individual refusing to look back, striving to create a new company defined by his leadership, rejecting what has gone before. After all, hasn’t he just closed a deal acquiring a 51% stake in a hotel company operating in a segment and region his own company has so far failed to penetrate? What could possibly be coming next?

The answer Thomas Willms delivers confounds some of the aforementioned assumptions, but clearly has the backing of his entire leadership team, and a front-line staff that has long proved among the most faithful and long-serving in the European hotel scene. “We’ve intentionally taken our time getting the strategy perfectly right,” Deutsche Hospitality’s chief executive replies, “but 2019 is the year of Steigenberger.”

Of course, we are talking about a group that, until a rebrand in 2016, was known for years as Steigenberger Hotel Group. The change in moniker was never about running away from the luxury brand, which dates back nine decades – it was more a question of creating the framework for a truly international multi-brand portfolio operator – but it did seem that initial priorities lay with growing the group in other segments, evidenced by the launch of lifestyle brand Jaz in the City in 2015, upscale conversion brand Maxx by Steigenberger in 2018, the acquisition of a majority stake in Danish economy operator Zleep Hotels earlier this year and the ongoing repositioning of IntercityHotels, led by a new design template from Matteo Thun.

But at IHIF in March, Willms unveiled his ambitions for Steigenberger Hotels & Resorts, involving a complete relaunch, with investments of €120 million and plans for global expansion. Besides simply growing the pipeline and refurbishing properties, ‘Evolution Steigenberger’ ushers in a new brand identity and visuals; fresh food and beverage concepts; frontline elements, such as welcome managers, pop-up museums and in-house fashion events; and closer cultural ties to local communities, as well as strategic partnerships with third-party service providers. It also comes down to celebrating the qualities that have defined the group’s strength for decades. In order to plot the route forward, Willms is delving into the past.

“We’re talking about our heritage,” he exclaims. “This is almost 90 years of history and that is so important for Deutsche as a whole. Perhaps outside of our home markets it is difficult to convey just how strong the reputation of Steigenberger is among consumers. We have these wonderful, traditional hotels in Davos, Hamburg, Frankfurt and so on, but their very nature means we can’t simply replicate them. Our mission now is to transfer these great band values to new properties, while refining the existing portfolio.”

This refinement includes a €50 million renovation of the Hamburg property, which is already under way, as well as big investments into hotels in Petersberg, Baden-Baden and Frankfurt. “We feel the time is right to invest, with the German economy still strong – touch wood,” Willms says. “There’s a lot of pressure, sure, but that comes with great positivity and enthusiasm.”

On the development side, there are currently properties in the pipeline for Denmark, India and Thailand, and the chief executive acknowledges that a great deal of focus will lie in southern and eastern Europe and the Middle East.

“Obviously, we want to be in Paris, London, Lisbon and so on, but those markets are not easy,” he acknowledges. “There’s real potential in Budapest, where we have just signed a contract for an IntercityHotel, Prague, Krakow, Warsaw – those great Eastern European cities in closer-to-home countries. We’re not looking at Russia right away, but we are interested in the vicinity. We are also looking at resorts, especially in Mediterranean markets with plenty of German tourism.”

Interestingly, a major enabling factor in adopting such renewed focus on Deutsche’s flagship brand has been the launch of an entirely new one that also leverages its strength. Maxx by Steigenberger only opened its first property in November, but the impact of having a conversion offering can already be felt across the portfolio. Within the Maxx pipeline are three Steigenberger properties currently identified as being suitable for repositioning in a move that simultaneously helps establish this new arrival on the market and elevates the Steigenberger stable.

“These were properties that perhaps were not quite in the same iconic league as Brussels, Frankfurt or Dusseldorf, but were still great hotels that we didn’t want to lose,” Willms explains. “Previously, that put us in a bind, but now we have an option that works for all parties. These hotels are now standard bearers in a way they were not previously. Owners love it and the staff feel empowered.”

An upscale conversion brand is a canny move in terms of growing the pipeline, which currently numbers over 30 with no more signings, which would take Deutsche to around 150 properties, but Willms is targeting 250 upwards by 2023.

“It puts us in a very nice space between the big five guys and smaller operators,” he says.

Having recently returned from the latest Maxx property, which opened in February, the CEO is clearly excited by what it says for the quality and potential of the brand. The Maxx Vienna, housed in a David Chipperfield-designed building, with interiors from Mateo Thun, was previously operated under the Falkensteiner Hotels & Residences brand and only dates back to 2013.

“As I told the team, we could not have taken this wonderful hotel previously,” he says. “It’s not in a prime location in the city centre, so that rules our Steigenberger. It’s certainly not an Intercity. But it’s a perfect soft conversion. We’ve changed branding and signing, and the systems, obviously, but it’s not been heavy handed.

“We didn’t need to invest €65,000 per key, as would be the case with a Steigenberger, but what we now have is a showpiece for the brand in a major European capital and the buzz that comes with that. A lot of conversations are already under way; it’s very exciting.”

It also means that Vienna will become the group’s first four-brand city when its third Jaz property opens early next year – a fact that clearly tickles Willms, who was based in the Austrian capital for a number of years during his time as senior vice-president and regional director for Starwood. “It gives me plenty of excuses to return and see friends,” he laughs.

The subject of multi-brand portfolios also begs a question about exactly what types of development partners Deutsche is looking for. Willms makes a ballpark estimation that the mix is currently split at 60/40 between individual and multi-property holders, respectively, and sees virtues in both types, insisting that it must come down to a case-by-case basis.

“The good thing about portfolios is that you can scale-up fast, but then there’s also the problem that perhaps one of the five you’re being offered doesn’t quite fit, and it’s difficult not to get greedy,” he says. “The conversation you have with an individual family and private equity owners are, obviously, quite different; with Maxx, I’m most excited by working with hoteliers, family businesses. You find a lot of passion there, people who take great care in what they do; those franchises are a much better fit because you know they are there for the long term.”

The chief executive is certainly passionate about finding what he calls “the right cultural fit”, a philosophy that was exemplified by the biggest deal of his tenure so far – the acquisition of a majority stake in Zleep Hotels, announced earlier this year. Danish founder Peter Haaber is being kept in place as CEO, and Willms is more than willing to acknowledge that he plans to lean heavily upon his new partner’s segmental and regional expertise.

“Zleep was the piece that was missing, but we have no experience in budget and economy brands,” he explains. “Peter is a great guy who created a great company, and he truly understands this space. And he knows Scandinavia, somewhere that is so difficult to enter, as I found during my time with Starwood.

“We have found someone who shares similar values. Like us, Zleep is a family business. I don’t think Peter wanted to cede control to one of the big guys, and I’m sure he had offers. He liked the idea of keeping freedom within our framework. We can help him move beyond his borders and he can help us with growing in a new space and bringing our other brands into a new region. There are a lot of synergies.”

Zleep currently operates ten properties, with another five in the pipeline. Willms is keen to develop a foothold for the brand in Deutsche’s domestic market and, while he believes there might be potential for franchising down the road, insists that the first five or so Deutsche will run itself. “We’re not going to buy property, we will continue asset-light, no freeholds, but everything else is an option,” he says.

But with five brands to operate, having inherited just three a little over 12 months ago, one wonders what impact this might have upon the CEO’s leadership style. Scale is always something you need to leverage, he says, but it is important not to lose sight of what makes each offering unique and be willing to empower the people around you. “We believe you cannot have a one-size-fits-all approach; each brand has to have a separate leader,” he insists. “Each also has its own goals and objectives and resources. In some cases, you’re talking about 90 years of operations against nine months; the requirements are quite different.”

It is a balance Willms is also trying to strike on a group-wide level, forging a vision for the future rooted in many decades of history. Deutsche Hospitality may be changing fast, but one gets the feeling its CEO will not allow people to forget the values and spirit that have brought it this far. 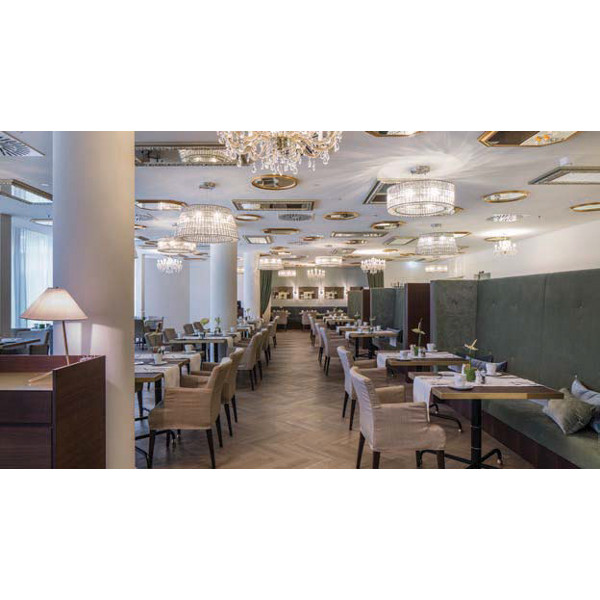 The Maxx Vienna, which Willms describes as a perfect soft conversion. 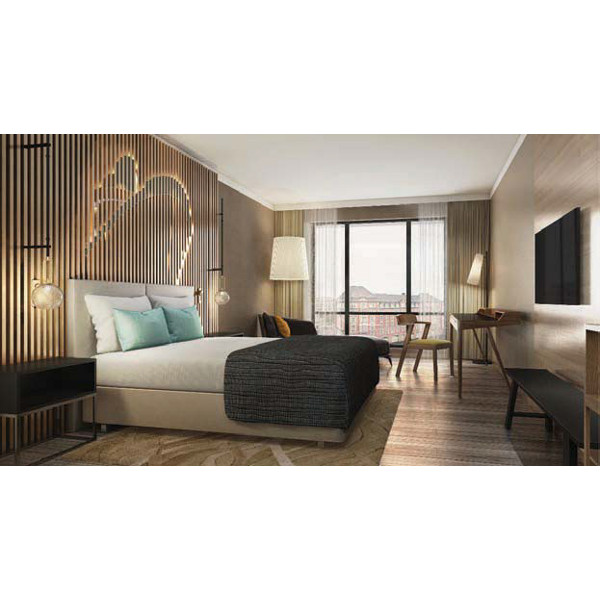 As part of the process of Deutsche refining its existing portfolio, Steigenberger’s Hamburg property is undergoing a €50 million renovation. 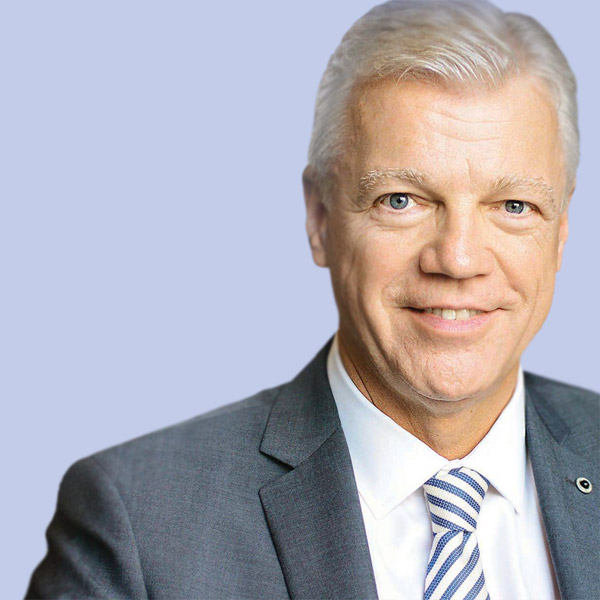