Rooted in culture – the Assila Hotel in Jeddah

Rocco Forte’s Assila Hotel in Jeddah promises a modern and fresh take on Arabian hospitality. Greg Noone talks to Olga Polizzi, director of design and deputy chair of Rocco Forte Hotels, and interior designer Martin Brudnizki, about how the hotel’s design celebrates the culture and history of the city, and the challenges they faced when bringing this vision to life.

After diligently combing through the transcript of TE Lawrence’s Revolt in the Desert for typographical errors, the publisher’s proofreader felt he should inform the author about what he’d found. Most of the text, it seemed, was without errors; it was beautifully written in fact. Yet none of the place names were consistent, a handicap to any readers unfamiliar with the local geography of the Arabian Peninsula.

Lawrence was unapologetic: “There are some ‘scientific systems’ of transliteration, helpful to people who know enough Arabic not to need helping, but a washout to the world. I spell my names anyhow, to show what rot the systems are.” The correspondence between the two was preserved as a publisher’s note in subsequent editions, as were the original place names; Jeddah enjoys three different spellings on the first page alone.

The city still defies categorisation. When Lawrence first landed in Jeddah in 1916, it was little more than an old, whitewashed settlement hugging the Red Sea, a coastal gatehouse to the holy sites of Mecca. A century later, the city has carved out an identity as one of Saudi Arabia’s premier tourist destinations, one that prizes its own brand of multiculturalism sharply defined in its public art, with pieces by Henry Moore, Joan Miró and César Baldaccini dotting its parks and major thoroughfares.

It’s these themes that Rocco Forte Hotel’s director of design and deputy chair Olga Polizzi and interior designer Martin Brudnizki have embraced in their design of the Assila Hotel, the operator’s first property in Saudi Arabia.

“It’s contemporary yet has a sort of warmth to it,” says Polizzi, who has used cooling white marble and an array of Arabian patterns, cushions and carpets to stitch together a contemporary interior design rooted in local culture. “So there is a feeling that you are somewhere welcoming, somewhere different, somewhere – hopefully – that feels like Saudi Arabia.”

When Hotel Management Middle East meets Polizzi in Rocco Forte Hotel’s London offices, she is recovering from a 6,000-mile flight from South-East Asia: “It was a bit of a shock to me, getting back to work after two weeks off, which I rarely have.” Those familiar with her work would find that unsurprising. As Rocco Forte’s director of design, Polizzi is responsible  for the refurbishment of over 400 hotel rooms a year, many of which she oversees personally. All of the interiors are suffused with her idiosyncratic sense of style, a deft fusion of the contemporary, the practical – Polizzi often laments the lack of a “comfortable bed” in many hotels – and local artistry.

This is all underpinned by her enthusiasm for the individual identities of the hotels she works in. “It’s quite difficult deciding whether you want the brand to really stick out or the hotel itself to be the important part of what you’re doing,” Polizzi says. “I would have hated having to design every hotel in the same way, or have a sort of ‘house look’. It would have been boring. Boring for the guests, boring for me, and I think not right. I think it’s nice to wake up in a country and think, ‘I’m in Rome or I’m in Florence or I’m in Scotland’ and have a feeling of the place you’re in.”

Some of the most striking results of this philosophy are on display at The Augustine in Prague, built inside of a renovated 13th-century monastery. Polizzi’s work at the site made the hotel seem almost incidental, going to great lengths to preserve the site’s courtyards and garden squares while making practical use of its terraces, wine cellars and stone archways. Space was even reserved for the monks to worship.

With most of Prague’s red-roofed churches having been repurposed as concert halls or touristic curiosities since the fall of communism, The Augustine stands as homage to the city where Kafka wrote.

In that respect, Jeddah presented a different set of problems. The city has long since overflowed from its original boundary walls, with few of the newer buildings having a debt to anything more than utility. Being placed within a freshly built mixed-use tower, the Rocco Forte group wanted to avoid repeating the design clichés that bedevil many of its contemporaries in the region. “They’re all international hotels: very comfortable and very nice,” says Polizzi. “But they’re ordinary. And we’re trying to be a bit different.”

The aspiration to be different led Polizzi to seek out fellow interior designer and friend Martin Brudnizki. She’d first encountered his work during a previous collaboration with the late David Collins, famed designer of London’s premier bars and restaurants, for whose firm Brudnizki had worked as head designer. When he left to start his own company, Polizzi seized the chance to work with him on the Villa Kennedy, Rocco Forte’s property in Frankfurt.

Brudnizki’s influences are modernist, explicitly drawing upon the sleek Scandinavian lines of Gunnar Asplund and Alvar Aalto, while referencing some of Dorothy Draper’s wilder approaches to colour. However, his attitude towards folding local culture into his designs dovetails perfectly with Polizzi’s own views on the matter. “The Assila was one of our first projects in the Middle East, so we were particularly excited about the prospect of employing traditional Middle Eastern influences while ushering in a more contemporary, clean-lined aesthetic,” says Brudnizki

“The clean, simple architecture complements the warm and inviting public spaces, making it a wonderful destination for travellers, businesses and locals,” he says. “That combination of simplicity and heritage helps to create an incredibly inviting and relaxing environment.”

This was clearly displayed in the way Brudnizki approached designing the restaurant spaces within the hotel, inspired during the design team’s frequent trips to Jeddah to consult with the developers.

“We started picking up certain cultural routines while we were there,” Brudnizki says. “One of them was the way in which residents gathered in large groups at mealtimes, so we made sure all of the restaurants accommodated this. We have mixed large tables with long banquettes and flexible furniture layouts so that the seating arrangements can suit a party of any size. The overall effect is something that feels open, sociable, and comfortable.”

The sheer range of the artwork on display inside the Assila Hotel makes it unique, with 2,000 pieces acquired and commissioned from local artists. Nora Alissa, a prominent Saudi art consultant whose work had been displayed in London twice prior to the hotel’s construction, curated the entire collection. Antique doors and fretwork resembling those found on the city’s ancient balconies, or mashrabiya, where women are able to look out on to the street unseen, have also been incorporated into the room designs.

“Alissa and her team have done most of the work on the artwork, and it works so well with the interiors of the hotel,” Polizzi says. “It’s extraordinary how art is so specific to the country it comes from. You know, if I’m designing rooms in Brussels, the artists there are totally different to those in Florence or Rome. And it does immediately give a sense of place.”

For Brudnizki, this is essential. More often than not, he thinks that a Western design aesthetic is blindly adhered to in Middle Eastern hotels. “People often conflate history with Western history, and so forget the rich and diverse culture of the Middle East and how this has contributed to our palettes as designers,” he says. “Whether one thinks of ancient times and the incredible patterns and textiles that came from Persia, or the modern period with the influences of Pierre el-Khoury and Karl Schayer in Lebanon, to the incredible work contemporary architects and designers are completing, the region has and continues to have much to offer.”

The degree in which Polizzi’s work as an interior designer has been shaped by European influences is one that she has personally wrestled with. “Obviously, because we’re European there must be a little bit of Western influence mixed in with what we’re doing,” she says. What she is more concerned with is bucking the stereotypical design features of upscale hotel interior design in the region: the huge atrium, the endless polished marble and the menacingly large chandeliers.

“There are certain things that you see in all those hotels that make them somehow impersonal and too glitzy for my taste,” says Polizzi. “I think you need a bit of glitz, but I think people from that part of the world, as they travel around the world more, are beginning to appreciate something a bit more individual.” Design, in short, that befits a city with three names.

Even so, this is as far as Polizzi will go in promoting her own work on the project: she’s as self-effacing as anyone who has just emerged from a project that’s taken months, even years to bring to fruition. “It’s all so difficult talking about my work. I always find it hellish. Agony!” she exclaims. A surer note in her voice reappears. “I’m always my biggest critic on hotels. I always think, oh God, perhaps I should have done this, or that’s not quite right. I’m never satisfied. But I think this is a lovely hotel. And I hope it’s going to be liked.” 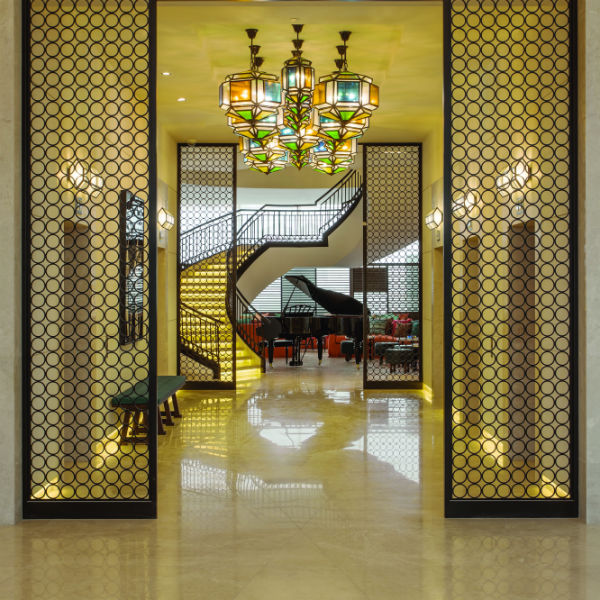 The hotel’s design incorporates aspects of local culture to capture the ambience of Jeddah. 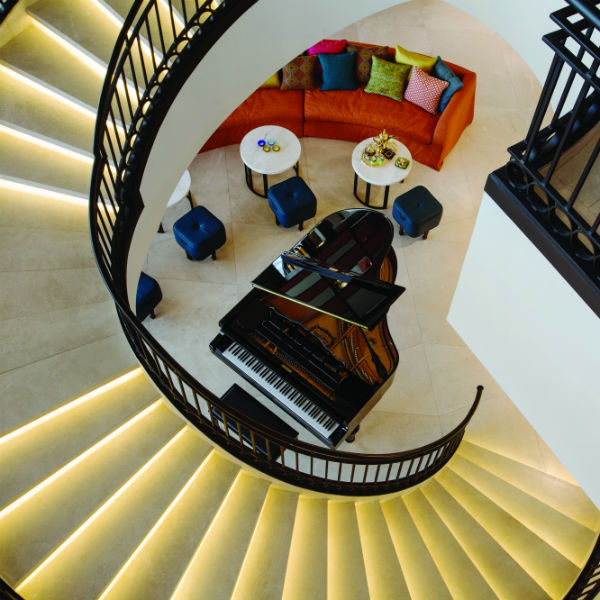 The Assila Hotel in Jedah, Saudi Arabia, is the first in the area for Rocco Forte Hotels. 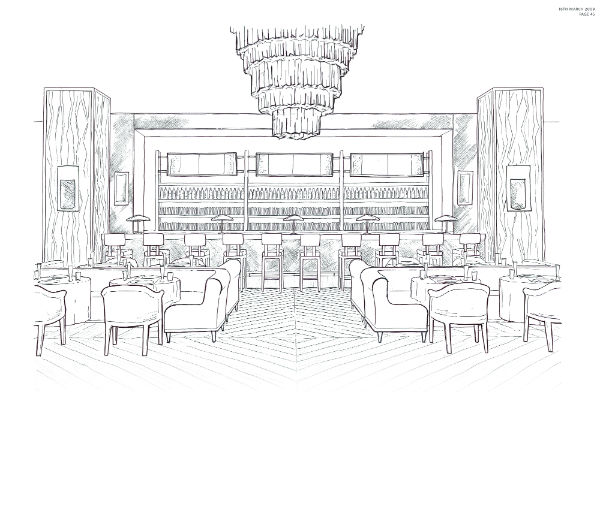 The elaborate plans were meticulously followed. 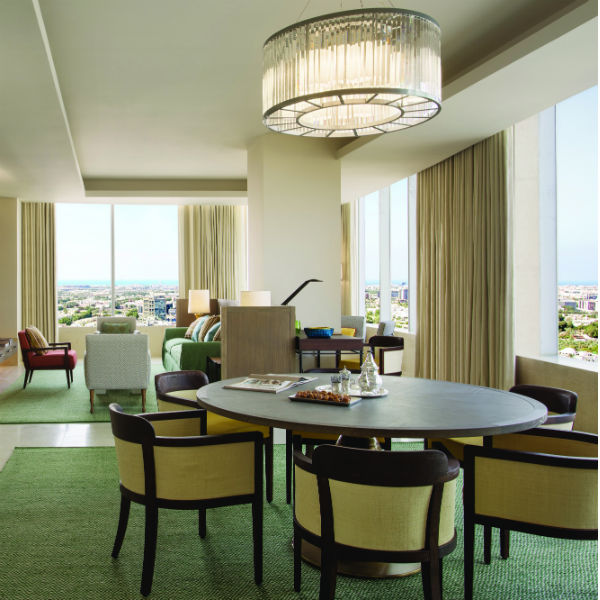 The designers focused less on glitz and more on subtle, personalised touches.
Post to: