Reborn in style – why The Beekman is redefining New York luxury

After years of improbable dereliction, the old Temple Court building has been restored and revitalised as The Beekman, arguably NYC’s most eagerly awaited luxury hotel opening in years. As its launch date fast approaches, Greg Noone talks to the lead interior designer on the site’s restoration, Martin Brudnizki, about how the history of the site and his own upbringing inspired him to bring a bit of Edwardian glamour back to Lower Manhattan.

By New York rules, Temple Court should have stayed forgotten. As one of the city’s first skyscrapers, it began life as a haven for lawyers looking to work in running distance from City Hall. Most of its offices ringed the tower’s atrium, open to a rectangular upcast armoured by row after row of iron balustrades and capped by a pyramidal skylight. The immediate impression is of a building in disguise, where the original intention has been disconnected from the finished product. Gazing up, past the tessellated railings and stepped ceilings and into a cloudy Manhattan sky, it’s easier to imagine fine silk shirts fluttering down from on high than the ghostly echo of clattering typewriters.

The tower’s abandonment came in phases. In 1893, a blaze that began in a typewriting office consumed part of the building. Persistent fire safety concerns led to the boarding up of the atrium by the 1940s, and, despite a host of illustrious tenants that included the War Resisters League and the Citizens Union, the premises was finally emptied in 2001 when architectural firm Joseph Pell Lombardi relocated. For the next two decades, the lot stood vacant, as a series of developers, including Ruby Schron and Andre Balaszs, sunk millions of dollars into failed restoration attempts.

Temple Court’s future as a hotel was only guaranteed in 2012, when real estate mogul Alan Gross acquired the property. Promptly renamed ‘The Beekman,’ by then the building had acquired an alternative future of its own, having become a magnet for urban explorers and fashionistas eager to shoot in its dilapidated corridors. That year, in rooms decorated in the style of the Titanic (post-sinking), Maison Martin Margiela and H&M held the launch for their latest collaboration. The guest of honour was Kanye West.

“Context is everything to us,” says Martin Brudnizki, the lead interior designer behind The Beekman’s restoration. “With every project, we always look to the history and heritage of the building and its location. It’s the first thing we do.”

Heritage, of course, comes with complications, especially if the intention is to transform an abandoned 19th-century office building into a functioning hotel. At the very least, it meant serious thought being given to how to bring The Beekman up to speed with the municipal fire code. While that problem was solved by the installation of a complicated system of flame-retardant sheets that would fall from the terrace ceilings and slot into glass cases in the event of an incident, an added complication lay in the irregular ceiling heights. “I [had] to do new moulds for every single floor,” said Gross, speaking to The Real Deal magazine in July. “It slowed down the job and created all sorts of hardships for us.”

Nevertheless, the work allowed Brudnizki a blank canvas in which to realise his ambition of a set of interiors that would not only reflect the building’s historical legacy, but also update it for New York’s downtown crowd. “With this in mind, we diligently restored much of the original detailing, including the wrought iron balustrades, but included an eclectic array of furniture and accessories that would work for the modern day,” he says.

Although Brudnizki maintains that his intention was to bring The Beekman back into an Edwardian theme, the results seem closer to the fragile glamour of the Jazz Age. Art deco lamps are affixed to the elevator roofs; geometric glazing bars, William Morris writ large in cast-iron, decorate clouded windows in the stairwells. Tessellated tile formations in rich colours stretch along the corridors, reverting to shades of white, light grey and gold in bathrooms bedecked with period fixtures and short, stand-alone ivory-coloured baths. “Moving away from the atrium, the bedrooms have been designed to encourage relaxation while focusing on Edwardian grandeur,” Brudnizki explains.

“Beautiful walnut furniture is complemented by sumptuous fabrics such as leather, mohair velvet and silk.”

More subversive touches may be found elsewhere, if one looks carefully enough. In the lobby, a porthole allows guests to peer into a fantasy pastoral scene, a bee’s-eyed view of dandelions and green fields. One of the reception desks nearby lies submerged under a selection of kilim rugs. “The final look,” affirms Brudnizki, “is that of a traveller’s home, filled with curiosities and objets d’art all relating back to The Beekman’s history.”

Despite almost two decades spent in the upper echelons of interior design, there are few outward signs that Brudnizki’s oeuvre has begun to coalesce into a signature style. That appearance is a little deceptive. At almost every site, his practice designs according to a philosophy of ‘looking back to look forward’. By tethering each site to its own history and sense of place, each renovation or restoration project that Brudnizki embarks upon is imbued with a rare, almost piquant sense of nostalgia.

I like to think the interior helps tell the rich story of the Temple Court, which will be impressed upon each and every guest.

The link is unsurprising, given his upbringing. As the son of a civil engineer, Brudnizki grew up surrounded by his father’s architectural drawings, an influence on his future career complemented by his mother’s canny accessorising of the family home. The Swede cites Gunnar Asplund as a crucial formative influence: “His ability to translate a sense of history and belonging into something contemporary and ready for modern-day consumption has always captured my imagination, and this has seeped into my work.”

Yet, while the sleek lines of an Asplund-adherent do appear in Brudnizki’s projects from time to time, they tend to be buried deep within his work, underneath a deep commitment to function and context. When the designer and his team travelled to Jeddah to begin work on Rocco Forte’s new Assila Hotel, they paid special attention to the daily routines of diners throughout the city, incorporating outsized tables with long banquettes to suit the way in which residents tended to gather in large groups during mealtimes. During his firm’s restoration of the Academicians’ Room, at the Royal Academy of Art in London, Brudnizki personally intervened to preserve the original timbers from the Norman Shaw’s 1883 design. They contained dozens of holes, a legacy of the nails hammered into place by Academy curators when the space was used to hang architectural sketches.

For Brudnizki, New York City has offered its own well of inspiration. “It’s the pocketed neighbourhoods,” he says.

“The Upper East Side is full to bursting with wonderful museums, each offering a glimpse into the history and ideology [the city]. Chelsea is the beating heart for art, so it was a no-brainer as a location when we were deciding where to locate our New York studio.

Perhaps one of my favourite parts of the city, though, is the West Village; I’ve recently bought a flat there and love the quiet, family-run restaurants and shops.”

Brudnizki regards Lower Manhattan in much the same way, and retains fond memories of the area from when he first started out in the city, walking in sight of the totems of old New York: the Woolworth Building, the Brooklyn Bridge, and – fatefully – old Temple Court.

Certainly, Brudnizki is proud of his role in shepherding the tower from being urban curiosity to a destination in its own right. “The building has such a natural, beautiful quality about it, you can’t help but have your breath taken away from you,” he extols. “I like to think the interior helps tell the rich story of the Temple Court, which will be impressed upon each and every guest. Because the hotel houses so many beautiful objects, furniture and original detailing, visitors are going to want to come back time and again. That’s the beauty of working on a project like The Beekman. It’s infinitely interesting.” 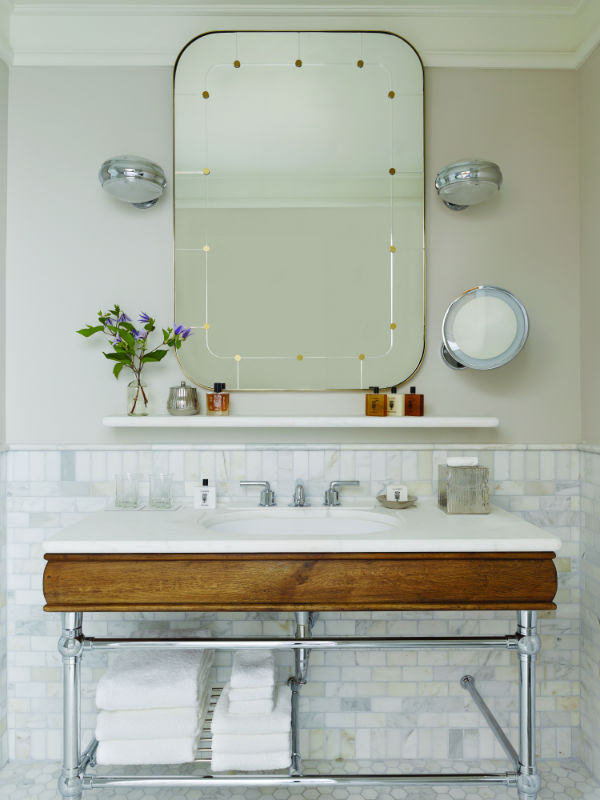 The Beekman’s bathrooms are decked out in elegant whites, greys and golds, and are rich in features redolent of Edwardian glamour, such as stand-alone ivory-coloured baths. Martin Brudnizki has been profoundly influenced by Swedish architect Gunnar Asplund, whose trademark Nordic Classicism can be detected in the sleek, clean lines of The Beekman’s interior spaces.
Post to: