Operators are having to fundamentally rethink the ways they deliver hospitality within the midscale segment, placing an ever-greater emphasis upon design, technology and public spaces. Abi Millar meets the hotel leaders trying to do something new in what has traditionally been the least ambitious of hotel tiers.

Until fairly recently, the typical midscale hotel was nondescript by design. While the format served its purpose – occupancy rates have generally remained high – guests were unlikely to find much here to surprise them. In essence, you got reliable, no-frills amenities at a reasonable price point, without much in the way of innovation.

However, the past few years have seen a quiet revolution in this sector. These days, well-known brands such as Holiday Inn and ibis find themselves competing with newer rivals like Tru by Hilton, IHG’s avid hotels, and Best Western’s Vib and GLõ, as well as a number of ambitious independent start-ups and the ever-growing prevalence of Airbnb. With guest expectations changing fast, many of the more established operators have undergone makeovers.

“We identified an under-served guest segment of more than 14 million midscale travellers, estimated to be worth $20 billion in annual industry revenues,” she says. “The fact that there is such a massive segment of unsatisfied midscale travellers was a driving force in the development of avid hotels – we wanted to create a brand that delivered exactly what guests were looking for when booking a hotel for a one or two-night stay.”

Hotel chain avid, which opened its first property in Oklahoma in August 2018, is a franchise-driven brand with an ambitious expansion strategy. Since launching in September 2017, it has signed more than 180 properties (46 of which are under construction or have planning approved). With openings expected to gather momentum throughout the year, this is IHG’s strongest brand launch since Holiday Inn Express in 1990.

“The avid hotels brand continues to attract strong interest from owners and is on track to be IHG’s next brand of scale,” says Gribble. “We expect signings to average around 20 avid hotels per quarter over time. We focus on high-value markets where we can tap into deep pools of unmet demand to create positions of scale, and on developing a differentiated guest and owner offering.”

Tru by Hilton tells a similar story. After launching in January 2016, the brand opened its first hotel (coincidentally, also in Oklahoma) in May 2017, and now has more than 60 properties across North America with more than 300 hotels in the pipeline. This makes it not just Hilton’s fastest-launching brand, but, according to the company, the fastest in hospitality industry history.

“We focus on high-value markets where we can tap into deep pools of unmet demand to create positions of scale, and on developing a differentiated guest and owner offering.”
Jennifer Gribble, IHG

“Tru by Hilton is an innovator and category disrupter as the first to fill a void in the midscale segment for guests who don’t have to choose between a consistent, fun experience and affordable price,” believes Talene Staab, global head of Tru by Hilton. “We listened to what consumers wanted and developed a prototype that offers a unique set of hotel features and an experience that guests find valuable and desirable at our price point.”

The brand is, in a sense, the all-American counterpoint to Marriott’s Moxy, a ‘millennial-focused boutique hotel concept’ that is undergoing precipitous growth across both Europe and the US, having debuted in Milan in 2014.

Then there are Vib and GLõ, Best Western’s new midscale brands, which opened their first properties in January 2017 and October 2018 respectively. While the two have many parallels, Vib is geared specifically towards urban locations, while GLõ prides itself on ‘breaking the suburban cookie-cutter hotel mould’.

One has had to get used to such marketing spiel over the past few years, as operators of every stripe rush to launch a new midscale brand. It would be a mistake to lump them all together – each brand at least tries to position itself slightly differently – but there are some clear commonalities in what is hoping to be achieved.

By and large, these hotels have relatively small rooms and larger public spaces. They are focused on design and technology, and may offer a touch of local flavour. And while not always targeted at millennials per se, they do aim to tap into that much-vaunted millennial mindset – valuing experiences over services.

“Tru by Hilton’s guests are looking for the basics served up in a fresh, consistent, affordable way,” says Staab. “Developed using qualitative and quantitative research from thousands of guests, Tru maintains an affordable price by focusing on the amenities that matter most, including smaller, more efficiently designed rooms with a mobile desk, comfortable beds, larger bathrooms with premium bulk amenities, and top-rate in-room entertainment.”

The lobbies, meanwhile, are re-envisioned as truly social spaces, with designated areas to work, play games, eat or lounge.

“Rather than an on-property restaurant and in-room coffee, Tru by Hilton caters to guests who prefer a complimentary breakfast bar and complimentary premium Lavazza coffee in our lobby,” adds Staab. “These simplified operations lend to a leaner labour model and more efficient property, which in turn equates to a more affordable price for guests.”

Essentially, it’s about working out what guests actually value and giving them more of that, while stripping back the parts that are surplus to requirements.

“We feature a right-sized guest room that offers exactly what guests need, and have made sure to include amenities we know are important to guests throughout the hotel,” says Gribble. “For example, guests want to have access to a great cup of coffee, which is why we offer premium bean-to-cup coffee in the lobby 24/7. We also have a variety of public seating, with access to outlets and wireless charging stations, for guests who prefer to work in the lobby and enjoy the public space.”

This ‘variety of seating’ is important. Almost invariably, these hotels cater to leisure and business travellers alike, or may even frame that distinction as artificial. For younger guests, who often work remotely, the bounds GLõ draws between work and play can be blurred.

In fact, GLõ explicitly targets the mobile workforce. Its furniture serves a dual function, with the breakfast area transforming into a workand- relax area after breakfast.

“Functionality is key to the GLõ design,” says LeBlanc. “GLõ was designed on the premise of being a cost-effective and space-conscious model, without sacrificing the expected and surprising amenities demanded by today’s younger travellers. By fully utilising each square foot, guests and developers are able to take full advantage of the space available. It’s function and form.”

In one sense, this is nothing new. The midscale segment has always been a lucrative market for developers – margins are higher, and staffing models simpler, than they are when you travel up the pyramid.

What distinguishes the latest brands is that they’re often targeting a very specific demographic, one with the money to spend in this segment but who have thus far been overlooked, and are being aided by advances in technology and connectivity that allow for delivery at a competitive price point, both for guest and operator.

“Since day one, we have been laser focused on how this brand will deliver for the consumers in the market and equally deliver for our owners,” says Gribble. “Through each phase of prototyping and design, we worked with our Owner Advisory Board and thirdparty contractors to estimate costs and value engineer where needed. These owners were instrumental in developing a brand that not only meets guest needs, but is also simple to build, operate and maintain.” In fact, there is something algorithmically efficient about the way these brands approach the market’s needs. Tru by Hilton, for example, has refined its design strategy along the way, in line with customer feedback.

“We incorporated learnings from open properties through strategic partnerships with key stakeholders including owners, guests, team members, general contractors and architects,” says Staab. “In May 2018, Tru by Hilton announced a prototype enhancement based on feedback, including more flexible in-room workspace, a more robust breakfast experience and updated lobby seating to make the space more comfortable and flexible. Now we’re at the stage where the brand is doing exactly what we need it to do; the concept is working and working with the right people.”

It’s a paint-by-numbers approach, but one that still leaves space to colour outside the lines. Even as new brands enter the market, the likes of Tru and avid are supremely confident that they have what it takes to succeed.

“I watched the development and incredibly successful launch of Tru by Hilton from afar during my prior position in owner relations and I’m a huge fan of the brand, its development story and how quickly it has gained momentum,” says Staab. “We’re in a great position and there is still so much runway for growth, with the brand uniquely meeting guest needs and fitting into virtually any market.” 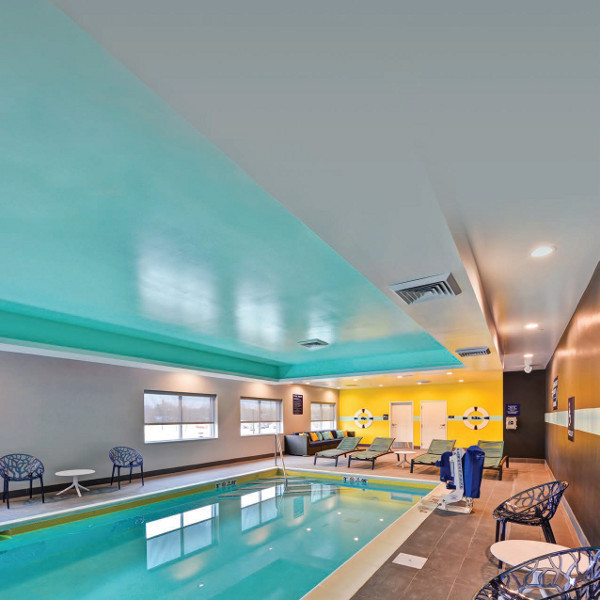 The pool at Tru by Hilton Shepherdsville Louisville South, in Kentucky, US. The lobby of the GLõ Lexington, in Kentucky, US. The hotel is operated by Best Western.
Post to: