Portrait of the artist – Adam Tihany

Heading up the redesign of The Breakers Resort in Palm Beach is only the latest instalment in a portfolio of prestige projects for Adam Tihany, including the Four Seasons Dubai, The Beverly Hills Hotel, Mandarin Oriental Geneva and a string of collaborations with top chefs. In an exclusive interview with Sarah Williams, Tihany looks back over a lustrous career and outlines a design philosophy devoted to the careful observation of human experience.

“When you travel you want to be ‘in’ places, you don’t want to be stepping on the same steps in the same places over and over again.”

Adam Tihany should know – the globally renowned designer spends much of his time travelling the world, from luxury project to luxury project. It’s a “professional affliction”, he says, but a very enjoyable one.

“If you’re going to Paris, your hotel should be Parisian; when you go to Chicago, your hotel should somehow embody the spirit of Chicago and not feel like a generic, canned luxury product,” he continues. “We always create in our projects some connection to local culture, typically through the design, through art, though detail, through scents and looks. And, in most cases, it whispers, it doesn’t shout; it’s pretty subtle, and it’s really a process of discovery.”

Tihany, too, speaks softly; a gentle lilt conjuring the local cultures he has himself known intimately: New York, where he lives, having established his studio in 1978; Milan, where he studied architecture and learned to design the true Italian way; and Jerusalem, where he spent his childhood in a Hungarian-speaking household.

It was in Milan, Tihany has said previously, that he was struck by how “generous and engaging the dialogue between architecture and interior design” can be, as he looked upon the Galleria Vittorio Emanuele for the first time.

In designing for hospitality, that dialogue is first and foremost about the narrative of human experience.

“As a profession, we are creating stories, events, experiences. And experiences come in different packages, but I think our common goal is to do something that is memorable to people,” he says. “It could be something that evokes nostalgia, or creates suspense, or surprises you – but whatever it is, in order to be memorable, it has to move you somehow.

“There are a lot of buttons of human nature that we can push, but to me it’s all about an experiential location more than anything else – we need to tell stories, to surprise, delight, you name it. The canvas is quite large, and it’s a lot of fun.”

As far as experiential locations go, it is the restaurant that Tihany knows arguably better than anyone. When he designed New York City’s first grand cafe, La Coupole, in 1981 (at a time that anything European was decidedly in vogue, he recalls), Tihany also helped carve out a new niche for his profession: restaurant designer. Since then, he has worked time and again with the world’s leading chefs and restaurateurs, counting Daniel Boulud, Sirio Maccioni and Thomas Keller among his repeat clients.

Successful collaboration relies upon a mutual understanding of live and let live.

“When we work with celebrity chefs, I think sometimes the designer has to step back and check his ego and let the ego of the chef shine through,” he says. “I see myself as a portrait artist or a customer’s tailor – it’s not about me, it’s about creating a space for somebody that has to perform, a place they can call their own.

“In order to do so, I have to put myself on the outside and look at it in a very critical way. Obviously it is my point of view, but the personality of the chef has to come through, and the collaboration in this particular case is to try to convince this person to sit still long enough that you can do his portrait.”

It doesn’t hurt that Tihany knows his way around the kitchen, having co-owned Remi, his New York restaurant, for more than two decades. Chefs can treat Tihany as an experienced colleague, skipping the obvious practicalities to head straight to those meaningful details that, combined, make a restaurant.

Within hospitality – and specifically the luxury projects in which he specialises – it is Tihany’s direct experience as a consumer of that world, his enjoyable ‘professional affliction’, that allows him to deliver. Recent projects have included redesigning guest suites at the Breakers Resort, Palm Beach, opened in November 2016, and a major renovation of the Oberoi New Delhi, due to open at the end of 2017.

“I’m very critical about what I like and what I need, second only to my wife who is even more critical,” he says. “So I always tell my client that if I can make my wife happy in this room, anybody will be happy.

“It starts with a hairdryer and with the height of the outlets and all kind things that frankly you have to know, because you’re dealing with very discerning customers: people who have incredible homes, wonderful art collections, great cars, designer names.”

It’s insight that can be seen in his recent work on the Four Seasons Dubai International Financial Centre (DIFC).
At 106 rooms, it’s a “flea on the camel’s back” of everything else that’s going on in Dubai, Tihany comments; a project refreshing to work on because its owners, whom he describes as young and sophisticated, were not interested in chasing the city’s conventional superlatives of tallest, biggest or glitziest.

“We took that philosophy, combined with the excellence of the Four Seasons’ operational strength, and designed a product that is modest in scale, but very rich in style,” he says. “Years ago, a wonderful leather goods company from Italy called Bottega Veneta had the slogan, ‘when your own initials are enough’, and I think that sums up the quality of the project – something that doesn’t scream anything, it just makes you feel comfortable, like a custom suit.”

Going into a project, Tihany takes steps to immerse himself in the environment in which it will breathe. For his newest field of work, cruise ship design, this has meant spending time on the waves and studying the way guests consume the product.

“I never do a project that I can’t live a little while before,” Tihany explains, “Otherwise it’s just not going to come out right; I’m going to miss something.”

Sometimes life informs art in other ways for the design star. If Tihany’s wife (and business development director, Marnie Tihany) helps him to appraise a project’s luxury factor, the involvement of his son Bram – a New-York based artist – can provide what he refers to as a “little department of philosophy”.

“Most people are very proud of their children, I hope, and I think that when somebody up high was dispensing talent, they dropped a little extra on his head,” Tihany says, “He’s an incredibly creative thinker, and we’ve worked together conceptualising projects in terms of philosophy and ideas, and taking it to the next level.”

At the Four Seasons DIFC, this includes the younger Tihany’s contemporary nod to 1950s automobile art in the hotel’s diner, as well as a locale-inspired photo essay series exploring Dubai’s architecture.

As well as rooting a property in its location, the elder Tihany has also routinely displayed his adeptness in painting its history. Renovating the Beverly Hills Hotel for its centennial anniversary in 2014, Tihany looked closely into the property’s past, discovering, for instance, that Elizabeth Taylor spent time there as a child because her father owned an art gallery in the hotel. Here, Tihany employs his skill as a portraitist once again.

“When you walk in there, I want you to feel the history of the place, to imagine Elizabeth Taylor is running through the lobby as a three-year-old child. People that come to these places have some kind of an expectation or a fantasy, and you need to respond to that in a way that is not ‘in your face’, so it’s a surprise, something that you make your own because you think you discovered it, and those are the best memories.”

Asked about his own recollections, the projects that over time have most delighted him, Tihany introduces another word: longevity.

While timeless design can’t be planned, he feels, it is achieved when the right ideas, timing and collaboration come together. One of two projects that stand out for him in this way is Aureole Las Vegas (opened 1999), the restaurant he designed for Charlie Palmer. Supported by what he calls the city’s “infinite possibilities”, Tihany created his striking four-storey wine tower, where bottles ranked in columns of glass and steel are fetched by high-wire gliding assistants.

“And not only is [Aureole] still there, but it’s still as fresh and as relevant as it was the day it was built – and that’s not easy,” Tihany says. “It was really an accurate portrait of a chef, combined with an accurate assessment of what Las Vegas was all about at the time, and still is, and, I think, good contemporary architecture that doesn’t age.”

The second project Tihany mentions is an extremely personal one: Remi. Tihany and his then business partner Francesco Antonucci sold their stake several years ago but, in a culinary scene as changeable as the weather, the restaurant is still open with the original 1987 design.

“It was the most difficult thing for me to do, to allow myself to be portrayed by myself,” Tihany says. “They always say that the shoemakers go without shoes, and, actually, I was petrified. But it was really the portrait of two young guys that were in love with the hospitality business and were willing to put their lives on the line to make something that people would appreciate.”

Three decades after that first sitting, in the afterglow of a career designing for the stars of luxury hospitality, I ask what a portrait of the artist might look like today – and whether it’s a task he would take on again. There’s a long pause before Tihany answers: “I’m not sure that I would do it again at this point of my career; I would rather spend my time teaching the younger generation how to do it.

“And it’s not because I’m old, or not ambitious – I just think that people who were instrumental or significant in any kind of profession have the responsibility to pass it on. So that will be my next chapter.” 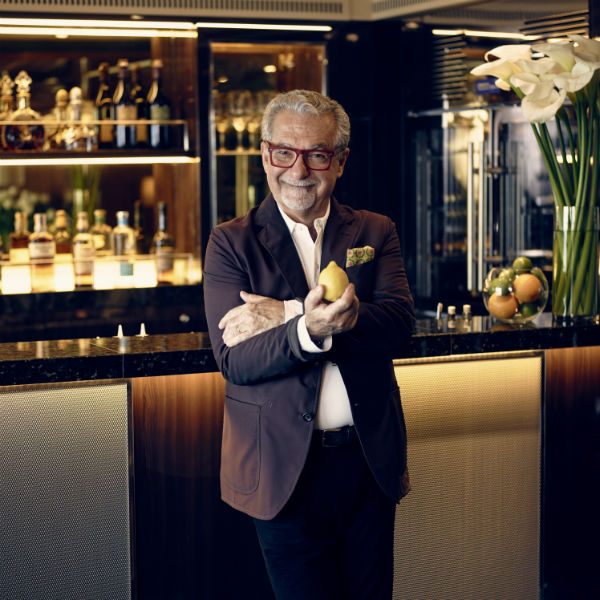 Adam Tihany in Seabourn Quest’s The Grill by Thomas Keller, one of the many restaurants he has designed. He has worked with top chefs around the world. 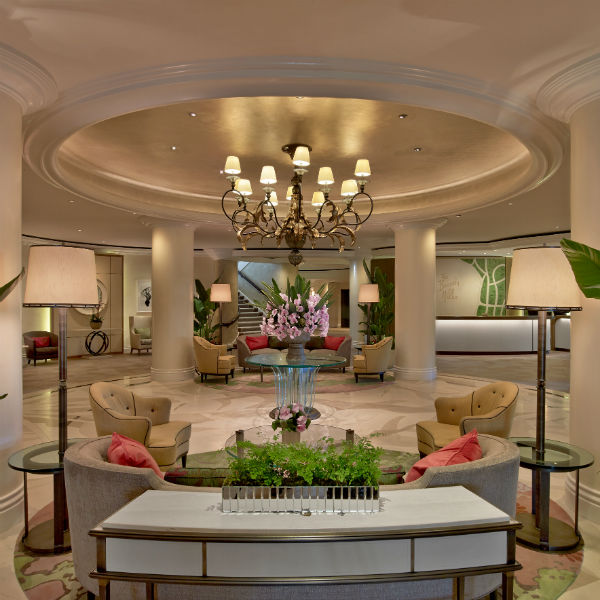 The restored Beverly Hills Hotel, designed by Tihany.
Post to: