As the pandemic rolls on, a strange dichotomy is afflicting the hotel sphere: guests want everything to be wrapped in plastic for hygiene reasons but they have also become more aware of the negative impacts of climate change. Elly Earls talks to Maurice Bergin, founder of Green Hospitality, Denise Naguib, vice-president of sustainability and supplier diversity at Marriott International, and Catherine Dolton, chief sustainability officer and vice-president of global corporate responsibility at IHG, to find out why temporary delays to plastic reduction initiatives will be balanced out by a greater focus on sustainability long-term.

As large hotel groups run down their inventories, stashes of tiny plastic toiletry bottles in homes the world over could soon be irreversibly depleted, followed by the branded notepads and pens that once sat in pride of place by the landline, but which now invariably end up in the miscellaneous kitchen drawer.

This is despite the Covid-19 pandemic delaying countless plastic reduction initiatives at government and operator level. Scientists may have debunked the idea that wrapping everything in plastic results in lower virus transmission, but we still feel safer if they are.

“You could argue it’s a psychotic break with reality,” says Maurice Bergin, founder of Green Hospitality, a resource and certification scheme for sustainable and responsible tourism in Ireland. “We’re using more single-use plastics and at the same time getting rid of them.”

Indeed, the pandemic has resulted in a sort of strange dichotomy, whereby guests will only travel if they feel like everything they touch has been cleaned to within an inch of its life – meaning single-use receptacles rather than keep cups – but they have also had a lot more time to think about the impacts of climate change and eco-destruction. At global hotel chains, this has manifested itself in the form of short-term delays to plastic reduction, and a stronger drive to shift away from single-use plastic in the long-term. Initially at least, this is being pushed forward predominantly by the ‘hyper focus’ of corporate customers.

“We need to continue to think not only about how to innovate on the front end to create less waste, but also how to manage it on the back end.”

“Previously, we’d had a lot of corporate customers very focused on how they were driving sustainability within their own companies, but we’re now reaching the point where, as a major supplier to them, we have become part of their climate strategy,” says Denise Naguib, vice-president of sustainability and supplier diversity at Marriott International.

Greenhouse gas emissions are categorised into three groups or ‘Scopes’ by the most widely used international carbon accounting tool, the Greenhouse Gas (GHG) Protocol. Scope three encompasses indirect emissions that occur in a company’s value chain, such as business travel. “As our corporate customers consider what their climate path is moving forward, and what meetings and events will look like as they go back to travel, we are part of that. I’ve never had so many conversations with customers over the past seven to eight months on that topic,” Naguib says.

Catherine Dolton, chief sustainability officer and vice-president of global corporate responsibility at IHG, has seen a similar shift among her B2B customers. “They’re thinking about similar things to us in terms of wanting to reduce their environmental impact, and travel is a huge part of that,” she says.

And while leisure customers remain a little behind – they’re not planning their travel as far in advance as big businesses, according to Naguib – it won’t be long before they follow suit, at which point programmes like Marriott’s Good Travel pilot in Asia will be ready for them.

“We’re seeing more leisure travellers wanting to spend time in destinations where they can be connected to nature,” Naguib explains. “This scheme gives them the opportunity to not just travel to the hotel but also engage in social, environmental or conservation projects. It’s going to be a prevailing area of interest for leisure travellers, especially on the backside of this pandemic.”

Both IHG and Marriott have some ground to make up on the single-use plastic front after pandemic-induced delays. After becoming the first major hotel group to commit to removing all small bathroom amenities bottles in 2019, with an original 2021 target for all hotels, some IHG hotels will now be delayed until 2022. Meanwhile, Marriott’s shift from small to large toiletry containers was completely paused during the pandemic. “We’re depleting our inventory and we’re now about a fifth of the way to total implementation; pieces of the puzzle are being implemented every day,” says Naguib.

Delays have been partly due to the lack of staff who would otherwise implement these initiatives because of furlough schemes, and partly because of the lack of guests during lockdown, which meant inventories weren’t run down as quickly as envisaged. On the upside, however, the pause forced by the pandemic has given hotels more time to think about what to replace single-use plastic with, and how waste reduction initiatives will work further downstream.

“These kinds of initiatives will very much be back on the table,” Naguib predicts. “We need to continue to think not only about how to innovate on the front end to create less waste, but also how to manage it on the back end.”

Another unexpected benefit of the pandemic at IHG has been the reduction of throwaway items in guest bedrooms. “We’ve removed pens and papers from the room – the less that’s in the room, the less there is to clean,” Dolton explains. “There’s also been less in-room printed collateral and paperless billing, and as these things didn’t impact the guest experience, we won’t put them back. We’ve proved that guests don’t need them; guests don’t want them.” Bergin argues it’s the same on the toiletry front. “I’m not going to base my choice of where I’m going to stay on the little bottles I might find in the bathroom,” he says. “My advice to hoteliers is always if you want to give a customer a present, give them a present. The toiletries issue I personally believe is like LED lights. It’s purely a matter of time before they effectively disappear.”

Even the guests that you might not have expected to embrace sustainability initiatives tend to be taken along for the ride, according to Dolton. At IHG, as part of a wider ten-year responsible business plan – Journey To Tomorrow – the group aims either to eliminate plastic altogether or move to reusable or recyclable alternatives, which means mapping out which single-use items are used by brand and by country, and working with suppliers and third-party owners to source alternatives in each market.

“There are regional variations and cultural nuances and we do have to be cognisant of those,” Dolton says, “but even when our colleagues in some markets thought their customers wouldn’t like switching to, say, bulk amenities, the overwhelming reaction has been positive. In some cases, we must make a stand and say, ‘This is the right thing to do and we’re going to bring our customers along with us.’”

Naguib says employees won’t stand for anything less. “When we set out sustainability goals, we did a lot of deep interviews with our executive leadership as well as our associates to understand what we as a company should be focused on as we moved through the next decade,” she says. “This resulted in one of our five core values tethering back to our responsibility as a company to drive responsible travel.”

Neither IHG or Marriott’s plastic reduction initiatives are driven by legislation, which is spotty across different markets and, in many cases, has been set back by the pandemic. However, both Dolton and Naguib are thankful that regulations are beginning to tighten. Ireland, for example, is about to sign the Climate Action Bill into law, which for the first time in the country will set out legally-required carbon reductions by sector.

“The industry will remove small amenities before regulators catch up,” says Bergin. “But legislation will draw in the 25% of businesses that aren’t doing anything yet. The first movers – that’s also around 25% – have already moved and the middle block, 50%, will be jogged along, and as the deadline gets closer, they’ll adopt good policies.”

He certainly sees demand for the environmental certification part of his business, the GREENMark, growing in the next few years. As a large part of one of its accreditation programmes – PlasticSmart – he encourages hotel operators to work with their suppliers to find alternatives to single-use plastic.

“One of my clients in Ireland was pretty embarrassed when I produced the tray of single-use plastics that I was given when I stayed there, but within 12 months they had got rid of all of them at no cost to the hotel. They’d turned around to their suppliers and said we want what’s inside but we don’t want this packaging, and if you don’t give us an alternative we won’t buy anything from you.”

Dolton agrees that the key to success is finding that sweet spot between doing the right thing and making it work financially. The example she gives – removing non-essential items from rooms – both reduces waste and is beneficial from a cost perspective. “When we launched our Journey To Tomorrow plan in February, we were in the heat of the crisis still but it was the right time to do it because it signalled that this is an industry that is going to bounce back. And also that sustainability fits into business strategy, and we can make it work for our owners,” she says.

Naguib believes the only way for the industry to recover is for people to get back on the road. Invariably, many consumers will only do that if they’re convinced the hotel businesses are behaving responsibly. “They are thinking about sustainability and social impact as part of their decision-making process,” she says. “We may have missed some goals in 2020 but now it’s about picking back up, identifying our path forward for the next five years, and doing more than we originally planned.”

“Legislation will draw in the 25% of businesses that aren’t doing anything yet.” 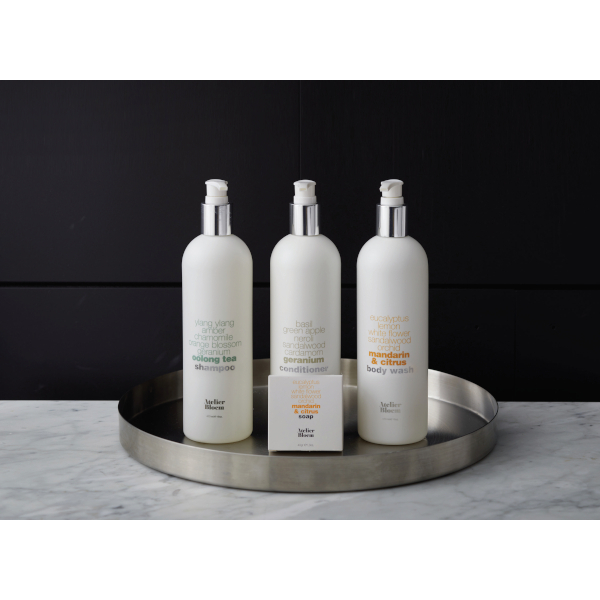 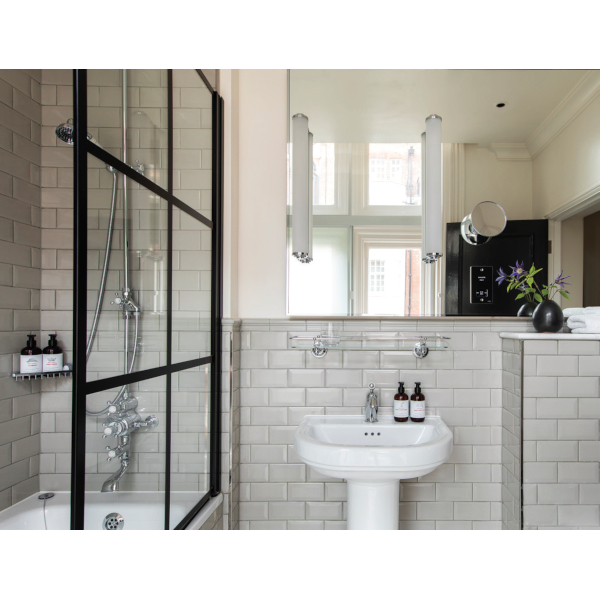 Both IHG and Marriott committed to removing all single-use bathroom bottles by 2022. 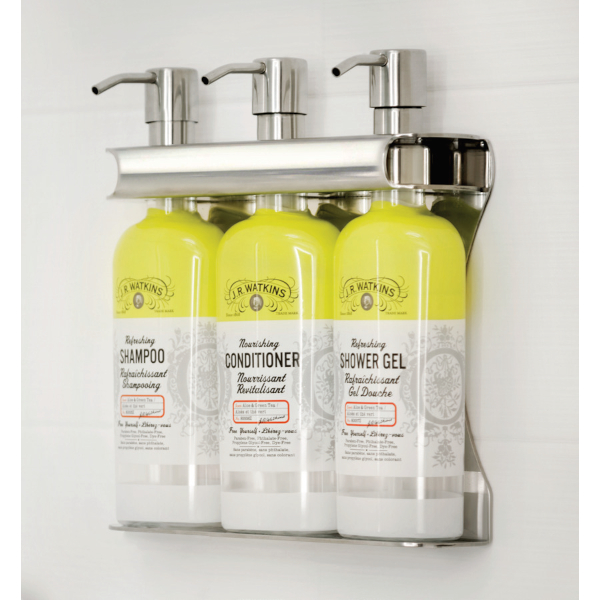 Hoteliers have slowly stumbled on the sweet spot between sustainability ethos and cost-effectiveness.
Post to: