Long driven by a more traditional approach to dining, European hotels are increasingly catering to modern diets, incorporating plant-based cuisine into their menus. Far from simply providing a secondary option for those with alternative palettes, these dishes are being served with panache and style, becoming an art form in their own right. Will Moffitt speaks to Jack McLaren-Stewart, founder of Saorsa 1875, the UK’s first vegan hotel, Saorsa’s head chef Deborah Fleck, and Tom Booton, head chef at The Dorchester, about why more hotels are embracing veganism and vegetarianism, and the onus this puts on culinary creativity.

In June 2015, Jack McLaren-Stewart was strolling through his home town of Cambridge when he glimpsed through the back of a butcher’s van. Dangling idly from the ceiling were pig carcasses cut lengthways. The image has stayed with him ever since, and compelled him to rethink his attitude towards farming, food and meat production. “I think I probably cried solidly for three days. I just thought, ‘Wow, I can’t do this anymore.’ I switched to veganism pretty much there and then,” he explains.

After graduating from university, McLaren-Stewart worked for several years at marketing companies running campaigns for start-ups and established brands, until his “worldview shifted” and his reservations around the ethics of these companies overwhelmed his passion for the role. His search for a more ethical business opportunity combined with a passion for food and boutique hospitality sparked a conversation with his mother Jackie about starting a fully-fledged vegan hotel.

“The two of us came from these different directions and we sort of met in this central place where we were like, ‘Okay, let’s explore the idea of doing something vegan,’” he says. “[Gradually] that got bigger and bigger, and spiralled a bit. It went from being a glorified Airbnb into a hotel.”

After witnessing the ever-expanding array of plant-based food and drink outlets, clothing brands and celebrity endorsers over the last half decade, a tailor-made vegan hospitality venture felt like a no-brainer for the McLaren-Stewarts, even if there was also a small sliver of trepidation about how a hotel selling itself as 100%-vegan in the cow-strewn pastures of Perthshire – a haven for hunting and fishing enthusiasts – would go down with the local community.

“Actually, the support from people has been amazing, and I think there’s a couple of factors around that,” McLaren-Stewart explains. “One is that we do source everything as locally as we can. We are engaging with local farmers and buying local produce, and wanting to be part of that ecosystem. Just because we don’t buy beef and lamb doesn’t mean we’re not interacting with them and supporting them.”

Established in Pitlochry among the rugged Perthshire farmland in 2018, Saorsa 1875 is the UK’s first exclusively vegan hotel. Housed within a 19th-century baronial edifice but decorated with bohemian flair, the venture is a sanctuary for vegans, vegetarians and the plant-curious. With a menu founded on local, ethical ingredients, and a mantra to prove that “delicious food doesn’t have to come at the expense of animals or the planet”, the flagship property might be unique within the UK, but it reflects a broader trend within the hospitality sphere to be more accommodating to alternative lifestyles and plant-based diets. Whereas European hotels have traditionally favoured a meat-and- potatoes approach to dining, many now provide vegan options in hotel restaurants and bars.

There has also been a drive to keep the use of animal hides and furs in hotel decor to a minimum, if not eradicate them altogether in some hotels. London’s Hilton Bankside made headlines in 2019 when it collaborated with interior designers to furnish a completely vegan room. With the core demographic at Saorsa aged 30–50 – despite the most passionate vegans being 20-somethings – and hailing from a diverse range of backgrounds, an integral part of the hotel’s allure is its food. The evolving menu has been specially designed to counter the narrative that veganism is all about monastic deprivation. Equally important is a drive to move past the mock meat approach made famous via outlets like Impossible Foods and Beyond Meat to deliver something more unique.

“That mock meat concept wasn’t an angle that we wanted to go down,” says McLaren-Stewart. “Actually, we just really wanted to showcase plants, and how incredibly vibrant and diverse they can be: there’s tens of 1,000s of edible plants on the planet. And most people restrict themselves to this tiny portion of them.

“We want to introduce people to new things. We want you to come and be like, ‘Oh my God, I don’t know what half the things are on that menu.’ It’s exciting and adventurous. And it’s throwing you out of your comfort zone.”

The kitchen is commanded by Australian-born chef Deborah Fleck, who has honed her vegan cooking skills across multiple continents, not least in Northern Europe where she trained under the watchful eye of plant-based restaurateur Neel Engholm. Engholm co-owns the vegan restaurant Plant Power Food in Copenhagen with Casper Bilton, a professional handball player and committed vegan trainer and dietician. For Fleck, while vegan cooking might require greater creativity or flexibility on the part of the chef, the notion that it leads to dull restrictive dining experiences couldn’t be further from the truth.

“That’s massively wrong. Vegan food doesn’t have to be boring and it doesn’t have to be monochrome,” Fleck says. “It’s just about thinking about what combines well.” By way of an example, she explains that there are six or seven different alternatives that can be used to replace an egg during cooking. “If you’re using it to bind, then you can use aquafaba or husks, but if you want something to colour it you can use turmeric. If you want to bake, you use different milks or oils or vinegars,” she advises. “It’s just about thinking outside the box.”

This desire to deliver innovative, great-tasting vegan food continues elsewhere. At The Dorchester, London, long-renowned for its staple classics, head chef Tom Booton sees guests of all ages opting for vegan or vegetarian food. Although not strictly vegan, Yotam Ottolenghi is a constant source of inspiration for Booton when it comes to vegetarian dishes.

“There is no doubt that the attitudes towards meat, fish and dairy are changing, and everyone is becoming much more knowledgeable about the impact their diet has on their health and the planet,” Booton says. “We are no longer a nation of ‘meat and two veg’. We are really developing our way of thinking when it comes to cooking at home, and the shift seems to be going towards more plant-based options.”

Others have made vegan food a key facet of the luxury experience. At the Belmond Le Manoir aux Quat’Saisons in Oxfordshire, Raymond Blanc has introduced five and seven-course vegan tasting menus, with produce sourced from the property’s vegetable garden. Meanwhile in Paris, The Shangri-La hotel has a monthly green dinner series, featuring a five-course vegetarian menu. Data suggests that this turn towards plant-based cuisine is a smart one, good for the planet but also business as interest in vegan food continues to grow. According to The Guardian, a record 500,000 people signed up to the ‘Veganuary challenge’ to eat only plant-based foods for a month this January, double the number of 2019. Meanwhile, a report published by media outlet Chef’s Pencil, using data gleaned from Google Trends to assess the popularity of vegan internet searches, supports the notion that interest in veganism is surging across the globe.

The explosion of specialist cookbooks and the success of chefs like Gaz Oakley – known as Avant-Garde Vegan to his thousands of followers on social media – have all helped turn a lifestyle choice once seen as cooky and cult-like into a trendy and ethical stance born from concerns around animal welfare, environmentalism and personal health. In January 2021, ONA in Bordeaux – an acronym, in French, for “animal-free origin” – was awarded a coveted Michelin star. The first of its kind in a country famed for its infatuation with meat and dairy dishes. Meanwhile, with Covid-19 forcing us to re-examine our relationship with food production and the risks posed by zoonotic diseases, further moves to cut meat consumption feel inevitable – even if they are going to be more minimal for some than others.

Hotels will need to keep abreast of these changes or risk falling behind as the needs of guests continue to evolve, and as customers crave authentic experiences that fit with their own virtues and values.

“Every time someone gets a good vegan meal, they go a little bit further,” Fleck says. “I think the awareness of climate change and the impact of produce and raising animals, and then the damage that we’re doing to the animals as well as the environment, [are] helping [to promote veganism].”

McLaren-Stewart concurs. “I think without a doubt veganism is here to stay, and I think we will only see it continue to gain more and more traction. I’m really interested to see it playing out beyond food as well because I think food has kind of been the main battleground for it. But seeing the innovation in the fashion industries and design and textiles is just awesome, and watching that come to the forefront of everyday life is going to be really exciting.”

The hotel prides itself on cuisine before everything else. 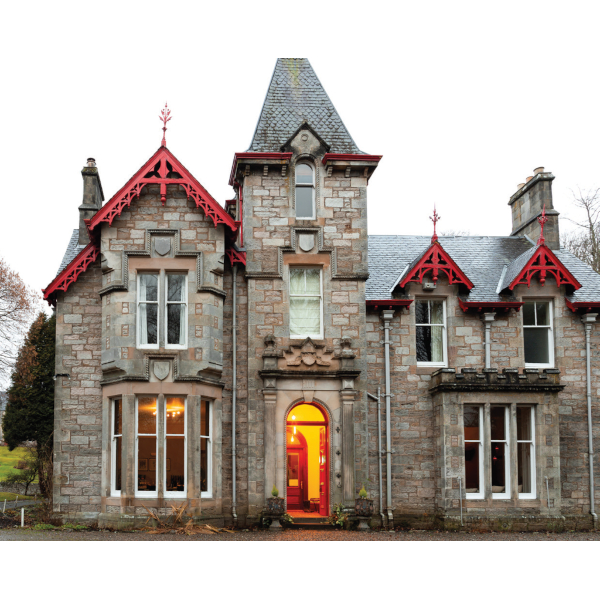 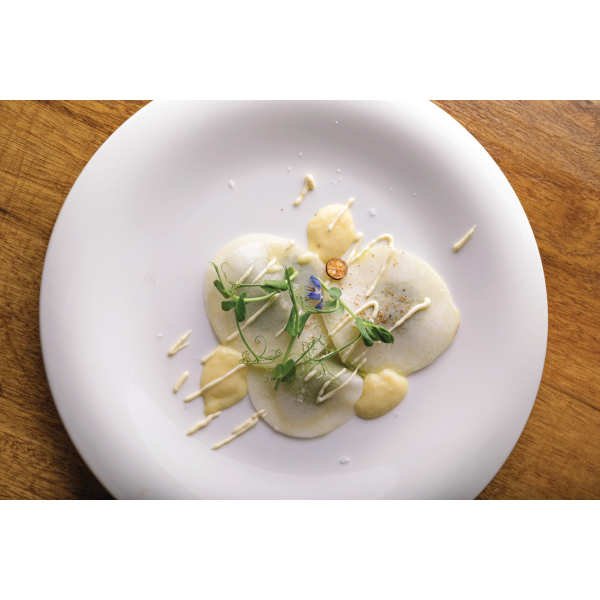 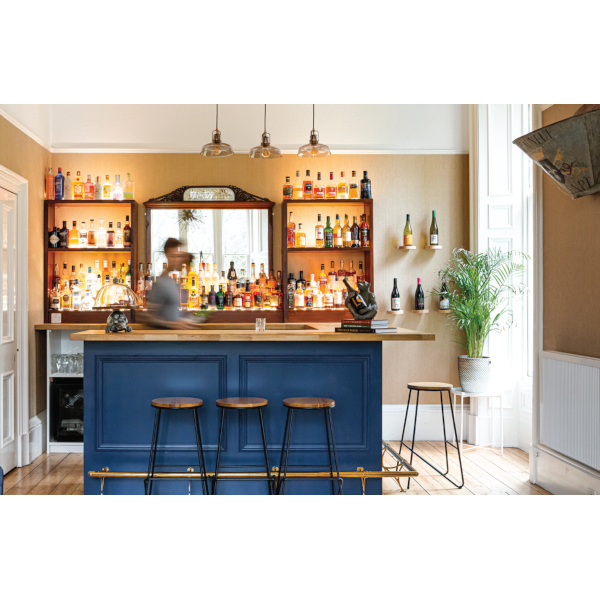 The bar at Saorsa remains just as free of dairy and meat as everything else.
Post to: