In December 2017, Hilton unveiled its Connected Room concept, a first-of-its-kind, high-tech guest room that enables customers to personalise and control every aspect of their stay from one central point – their mobile device. As the hotel giant prepares to roll out the programme, Patrick Kingsland sits down with Josh Weiss, its vice-president of brands and guest technology, to discover how the guest experience could be transformed.

In today’s hotel market, guests expect much more from the services and experiences they receive. The rise of new digital technologies, smartphones and entertainment products mean a room with patchy Wi-Fi and a few reruns of Friends on the television will no longer suffice for an increasingly content-hungry and experiencedriven customer demographic.

To cater for these changing demands, hotel operators are increasingly deploying new technology to improve the guest experience. According to the ‘2017 Smart Decision Guide to Hotel Guest Experience Management’, almost two thirds (62%) of hoteliers surveyed increased their IT budgets by at least 25% in 2017, with guest experience initiatives dominating expenditure.

One of the most eye-catching innovations announced last year was Hilton’s ‘Connected Room’, a concept billed by the company as the “first truly mobile-centric hotel room”. Using the Hilton Honors mobile app, guests will be able to personalise and control every aspect of their stay using their mobile device, from unlocking doors using a digital key to controlling lights, thermostats and televisions.

“Imagine a world where the room knows you and you know your room,” Hilton’s CEO, Christopher Nassetta, said of the launch. “Imagine a world where you walk in [and] the TV says, ‘How are you doing, John? Nice to see you.’ All of your stuff is preloaded and the only thing you ever need to touch to control the room is in the palm of your hand.”

The Connected Room concept was built out of Hilton’s ‘digital key’, a check-in, room selection and access tool made available on the Hilton Honors app in 2014. From a simple, proof-of-concept system that was trialled in a small number of hotels five years ago, the tool quickly established itself as a fundamental part of Hilton’s guest experience offering.

“For many guests, it is now a basic expectation,” says Josh Weiss, vice-president of brands and guest technology at Hilton. “You can go right by the front desk, straight to your room and open your door with your mobile device.”

Advances in IoT, and in the devices themselves, made it timely for us to explore a whole new connectivity approach.

The “passionate adoption” of the digital key gave Hilton the impetus to create the Connected Room, Weiss says. But it was the development of a new set of technologies known as the internet of things (IoT) that provided the means.

“Advances in IoT, and in the devices themselves, made it timely for us to explore a whole new connectivity approach as part of this platform,” Weiss says. “We solidified our goal to create more of the features and functions that guests want within the Honors App, which we see becoming a remote control for the entire hotel experience.”

As well as benefitting guests, delivering services through a platform has major operational benefits for hotel owners and operators. In the past, the lifespan of hardware products used in hotel rooms, such as DVD and Blu-ray players, was remarkably short. One minute something would be considered cutting edge, the next it would be outdated, and require hotels to remove and replace it.

“Now, with the advent of the cloud, new types of networking and hotels with bandwidth, a new set of options have emerged,” says Weiss. “With a platform, we can push new content, products and features out to the hotels via the network, much like your iPhone receives software updates. This saves money for the company and for our hotels, and, more importantly, helps us innovate quickly and push new features to scale much more quickly.”

Of course, Hilton isn’t the only hotel operator designing high-tech rooms. Marriot recently launched an IoT Guestroom Lab at the company's corporate headquarters in Maryland, US, in partnership with Samsung and Legrand. What makes Hilton’s concept unique, according to Weiss, is its scale. While the technology is currently in the beta phase in 500 rooms, it will soon be expanded to 1,000 in the coming months and more thereafter.

“Deploying an unbelievable experience in a few rooms can get press coverage, but it isn't really something that is going to score with our guests and hotel owners,” says Weiss. “So, when we say our platform is the ‘first’, we mean it is the first to be designed to scale. From a technology standpoint, it will operate in hotel infrastructures that are brand new, [as well as] older. It will also have the relevant content to appeal to different guest segments and market types.”

Customisation is another way the Connected Room distinguishes itself from similar concepts, according to Weiss. Using the Hilton Honors app, guests will have a high degree of control over temperature, lighting and TV preferences. When they travel from one connected room to another, these preferences will remain stored in the app.

“A minor irritation we see is that when guests travel from one hotel in the US to another, [TV] channel numbers change,” Weiss says. “CBS may be number five in one market, but number 40 in another, for example. We are going to make it easier for them to tap on CBS and drag it to the top of their preferences on the app, so they can navigate the television much more easily. It is about allowing guests to set their own preferences and anticipating those preferences based on things they have asked for in the past.”

While an increasing proportion of hotel guests now stream content on laptops and mobile phones, demand for content on HD screens installed in rooms is still strong. The latest Honors app will therefore include what Weiss describes as a “new approach to the guest entertainment proposition”.

“We want to find a way to deliver the right type of content to guests, from live sporting events or the news, to streaming content that they want, on demand and at their own convenience,” he says. “We are very aware of which types of streaming providers guests are watching and our goal is to have a really compelling set of content that they can fully control.”

We want to find a way to deliver the right type of content to guests, from live sporting events or the news, to streaming content that they want, on demand and at their own convenience.

However, not every guest will want to control a light switch using their phone. For those who prefer to engage with their room in traditional ways, Weiss says hotel operators must strive to make their experience as comfortable as possible.

“Being a friendly and welcoming hospitality experience for all of our guests is really important to us,” he says. “That means we are not replacing traditional plastic keys with mobile devices or removing TV remote controls.”

Even for these more traditional guests, improvements can still be made in terms of experience. In most hotels, for example, TV remote controls are a nightmare to use: many have a large number of buttons that require reading glasses to navigate. Changing this is another priority for Hilton, says Weiss.

“We are radically simplifying the traditional remote, so that it works better for different people: early adopters, those less comfortable with new technology and everybody in between,” he explains. “We have gone through four iterations of the remote control already and we will keep redesigning it until we’ve got to the place where it is truly intuitive.”

Some say the current trend for in-room technology and automated check-ins is undermining the human experience at the core of hospitality, but for Weiss, the connected room isn't about replacing staff. If anything, he says, the opposite is true.

“This is about helping our guests who want to self-navigate and control things from the app do that, and letting our staff focus on delivering outstanding hospitality and revenuegenerating opportunities,” he says. “The human side of hospitality will get better and the digital side, too. They are complementary.”

With its mobile platform now built, Weiss says Hilton can continuously add new features and products even faster to scale. In the near future, he hopes rooms will be able to respond to voice commands and gestural engagements. Decor could even be customised by guests using the app to select their favourite imagery to be displayed on the walls. “We are looking at anything that can be connected, react against preferences and help us to create an outstanding guest experience and drive operational efficiency,” he says. 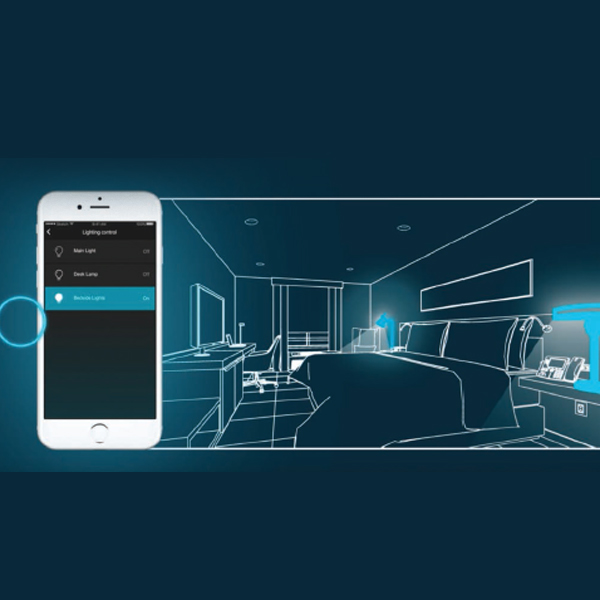 Hilton’s Connected Room concept was built out of its ‘digital key’, a check-in, room selection and access tool made in 2014. 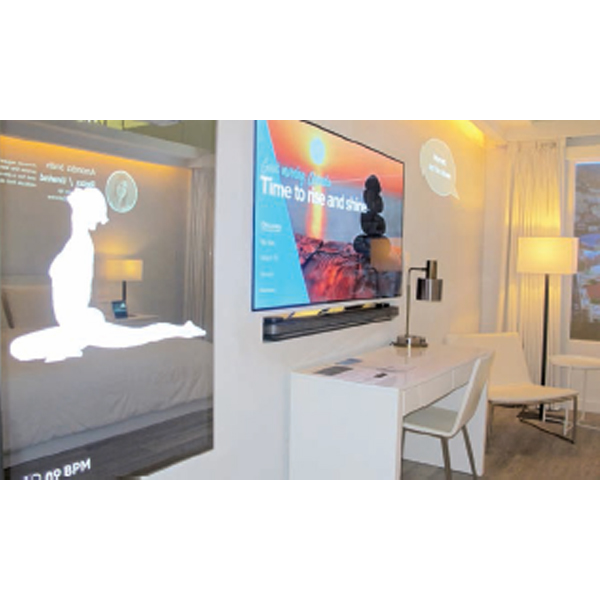 Marriott International has recently launched an IoT guestroom laboratory at its corporate headquarters in Maryland, US. 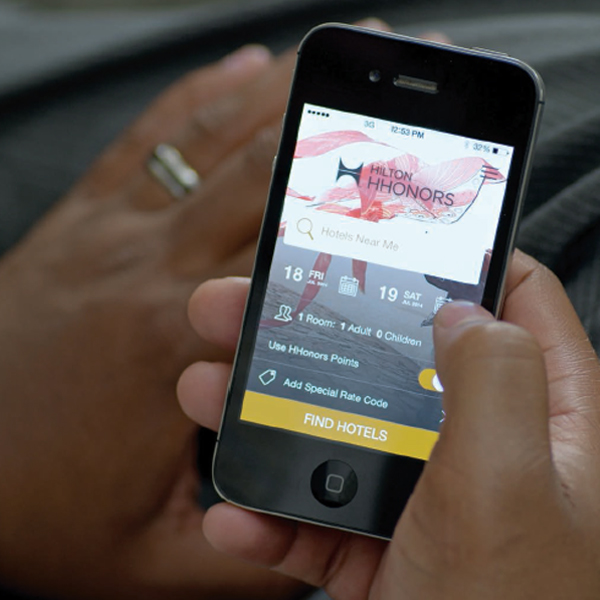