Out of service – the decline of in-room dining

As room service revenue declines, hotels are beginning to cut back on what was once seen as a staple of hospitality. So could this be the end for old-school in-room dining? Oliver Hotham speaks to experts with competing views – the Lanesborough’s Geoffrey Gelardi, citizenM’s Michael Levie and the London Marriott Park Lane’s Nicolas Kipper – about the uncertain future of one of the hotel industry’s most loved traditions.

Formalised room service has its origins in the days when luxury hotels saw themselves as guardians of high society. At New York's Waldorf Astoria in the 1930s, often cited as the first place to do 24-hour in-room dining, it was provided to guarantee the privacy of its clientele - foreign dignitaries, socialites and politicians were all frequent visitors, and what better way to keep them away from the prying eyes of the general public, and the press, than to make sure that they wouldn't have to leave their rooms to get an extravagant dinner?

For Geoffrey Gelardi, managing director at the Lanesborough in London, it remains as integral as it's ever been, a make or break way for a luxury property to set itself apart from the competition. Hoteliers, he argues, are in the business of "never saying no", and room service exemplifies that philosophy.

"It's the ultimate luxury," he says. "It's a bit of a cliché to say that people judge your hotel by your room service because, you know, it's a very difficult thing to deliver, but I do think it is a measure of a hotel."

Speaking to Gelardi, it's easy to forget that, for many in the hotel industry, room service is increasingly not the sacred cow it once was. This school of thought is one that's espoused by Michael Levie, chief operations officer at citizenM. When developing the hotel's brand, Levie and his team didn't even see it as part of the equation, and many in the industry are agreeing with Levie. The New York Hilton Midtown garnered a huge amount of media attention when, to the chagrin of many of its more loyal customers, it announced that in-room dining would no longer be available, arguing that due to the "decline in traditional room service requests" the service was simply no longer profitable.

The location certainly had something to do with it. Technology is putting massive choice at guests' fingertips, and with the abundance of mobile apps and websites giving customers in new cities a much more comprehensive view of their dining options, room service is increasingly far from the only meal available, even in cities that may be totally alien to a guest. In a city with fantastic dining options any time of day or night, what motivation is there to shell out $20 on a burger and fries?

"Last week, I was in Brazil - in São Paulo and Rio - and I stayed right smack in the centre of the cities," says Levie. "At night, I wouldn't even think of staying in the hotel for food - I'd just walk out into the city and explore; that's what you do."

This is not to say that technology can't contribute to a room service offering. The Lanesborough, for example, just underwent a £60-million renovation, and it's not a surprise that the service was at the front of their minds when planning what would go where, when introducing in-room online order systems.

And with hotels increasingly providing free Wi-Fi to guests, it makes sense that instead of driving guests away from in-room dining, IT can bring it closer to them, with brands such as Conrad, Radisson Blu and Marriott offering apps for download, with which a guest can order room service before they've even arrived.

"In cities where a guest can get something to eat 24 hours a day, demand for in-room dining is going to naturally depreciate."

It's easy to forget that the necessity of room service is also based on the location of the hotel. In cities where a guest can get something to eat 24 hours a day, demand for in-room dining is going to naturally depreciate, putting pressure on hotels to up their game. The London Marriott Hotel Park Lane, for example, finds itself competing with the incredible variety available to a guest staying in central London.

"People coming to London, whether they're on business or at leisure, would rather experience what is outside," says general manager Nicholas Kipper. "So you need to make your room service as appealing as possible, in order to capture the most people."

Levie's perspective is that rooms in hotels are an experience comparable to bedrooms at home and aren't really meant for eating in. Instead, citizenM offers visitors a 'living room' in the lobby, where guests can work, socialise or get a bite to eat.

"The need for room service really is devised from how horrific downstairs lobbies are to sit in or be comfortable with," he says. "They aren't very inviting, and being by yourself in a restaurant or bar isn't very appealing. So then you retreat into your room, because it's the only area that provides you comfort."

Levie's argument is that, too often, hotels offer room service because it's simply what everybody else does, and not because it's always what guests really want or need. Instead, citizenM puts significant resources into creating more sociable spaces outside of the bedroom.

"What we've found is that people come down and enjoy that area, instead of hiding out in their rooms," he says. "We recreated a fun experience for people where they really believe in the environment and are comfortable, so there's no need for room service."

But while many of the differences between hoteliers about room service are being framed as a difference in values, it's a service that's being scaled back, often, because of the complex economic realities of the industry.

"It's very expensive," admits Gelardi. "As I say, it always seems like it's Sod's Law; you either don't have an order on the books, or you've got three or four people that all want things at the same time. From a management and financial perspective, it's a very tough department to run well."

Menus can be complex, too. For Gelardi and the Lanesborough, for example, there's very little limit to what guests can get delivered to the room.

"Extravagance is in the eye of the beholder, I guess," he says. "We go through caviar like there's no tomorrow - we use an awful lot of it. What's also popular now is tea in the room - a full English tea in the room; that's quite difficult. We've also had people say to us that they'd like a certain kind of lobster, and we've gone out and purchased it especially for them."

Running an extensive in-room dining menu is a particular challenge - and not everyone can afford to be as extravagant as the Lanesborough. The Marriot Hotel Park Lane, for example, likes to counter this by keeping things fresh, re-evaluating the options when seasons, and tastes, change.

"What often happens is you get the room service menu, and it's like a bible, 50 pages long," says Kipper. "I think that's a problem when a lot of people get out the room service menu. You need to make that menu alive; you don't want to print the menu and leave it there for the next five years, right?"

Time is of the essence

From a staffing and logistics point of view, there are also much better ways to provide guests with food and drink, especially when room service in many hotels must be ready, often at any time of day, to prepare meals that are rarely ordered.

Why prepare a complex dinner menu, for example, when the vast majority of room service deliveries, for many hotels, are for breakfast? Gelardi estimates that roughly 90% of room orders at the Lanesborough are made in the morning, and Kipper estimates, at the London Marriott, it's 75%.

"In those circumstances it's always feast or famine, you know?" admits Gelardi. "You won't have any orders for a while and then you might get three or four at the same time."

The middle ground lies in giving customers as much choice as possible, listening to guests and understanding what they want to get out of room service. According to Kipper, customers tend to use room services in totally different ways, from basic comfort food to more creative options, and in order for it to stay relevant, hotels need to pay closer attention to what guests really want.

"I mean, the offer of room service had to move away from only offering you pasta, hamburger, sandwich and salad," he says. "It needs something a little bit more creative to really give a buzz to the whole thing."

Part of this involves better understanding how the types of guests are changing, and Kipper argues that in-room dining has gone from something more rooted in comfort food to more linked to the changing demographics of Marriott's clientele.

"We try to reflect the client mix that we have in London," he says. "With the Middle Eastern customers, we offer food that is more traditional than what they'd expect to have in a hotel." Does this all mean that room service might one day be a luxury consigned to only the most expensive hotels? It's difficult to say. Old-school hoteliers certainly think that a hotel without room service is lacking something but readily admit it's something that few can afford to do comprehensively.

"I bet their bottom line is not missing but I would say they're missing a service," says Gelardi. "A hotel of this calibre couldn't exist without room service. You would be so badly criticised."

There are two, somewhat contradictory, trends developing. On the one hand, room service is under pressure to stay casual and utilitarian, a simple way for guests to get something to eat at their convenience early in the morning or late at night, but on the other, it's under increasing pressure to wow customers with luxurious, and costly, in-room dining options. In the future, hotels might have to learn to do both, neither or go back to drawing board. 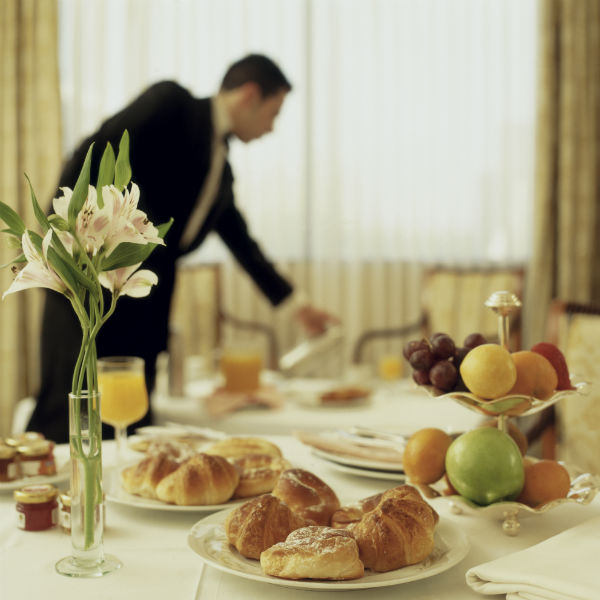 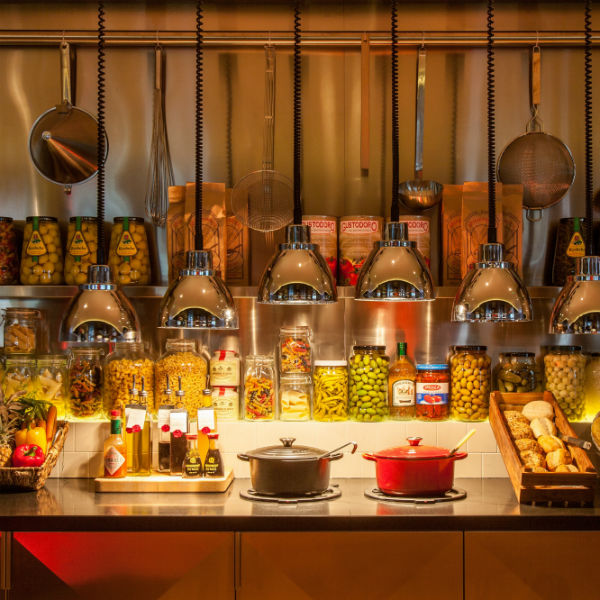 citizenM Amsterdam is fully stocked for almost any guest request.
Marriott Park Lane, where guests enjoy their room as a hub of relaxation, rather than an all-in space for the entirety of their stay.
Post to: