Mike Hall became the fastest person to ever circumnavigate the globe by bicycle, completing his tour in just 92 days. Hall, who was competing in the first Quick Energy World Cycle Racing Grand Tour, travelled 18,000 miles and smashed the previous record by two weeks.

For me, this was a race with a great backdrop - I wasn't travelling around to see places and I didn't want to handicap myself by being too adventurous.

I'd previously done the Tour Divide, an ultra-cycling challenge in which you pedal solo and self-supported from Canada to Mexico. That was very stripped down - you take minimal equipment, which seemed a quicker and more elegant way of travelling, so I applied the same principle here.

While going straight for the record didn't appeal, competing gave me internal motivation. Up until halfway through, when the other guys were still reasonably close, I was making sure I was ahead. Later on, I stopped looking behind me as much because the gap had grown. Instead, I had a daily target and felt guilty if I wasn't meeting it.

Although I picked my route for speed, I still wanted to pass through certain places, such as the Dalmatian Coast in Croatia. It was beautiful cycling in a beautiful part of the world, but it was hilly and pedalling through Albania proved difficult. I also wanted to travel through India to make it more of a round-the-world route, even though losing the Asian leg would have been quicker.

I needed a visa for India, but for everywhere else it was a question of showing up on the border; I just did it on the fly. Looking at the costs of round-the-world tickets is of no real benefit because you're always changing the timing; you just go and get on the next flight available.

Most of the time I slept in sheltered accommodation. When I set off, the temperature in Europe was well below zero, so I only managed a few nights camping there. In India the roads are quite dangerous so I tried to ride only during the daytime; it wasn't so much a matter of camping as stopping when I got tired and putting my head down.

It got easier in Australia because places are spaced further apart and there's lots of bush that doesn't belong to anyone - you can just pitch your tent somewhere quiet. But I ended up getting sick and needing a few more motels. In the US, it was really easy to find a motel, so I stayed there and kept my kit dry.

Every time people ask me what the highlights were, I say something different. I particularly enjoyed Monaco and the Cote d’Azur. That was pretty cool because it’s an exclusive part of the world; there’s a lot of money down there, and the most natural thing is to sleep out near the beach, waking up to a wonderful view.

"Although I picked my route for speed, I still wanted to pass through certain places, such as the Dalmatian Coast in Croatia. It was beautiful cycling in a beautiful part of the world."

There are also some great places in the US, from the Washington Coast through to the fantastic trails of Utah and California; I'd love to go back on a mountain bike. Death Valley was a highlight too, but it was hard work and very hot. There were numerous other challenges.

The US section was 6,500 miles long. On paper it looks like it should be quicker - there are lots of services and good roads - but in reality, it's difficult to cycle 200 miles a day for 32 days without a rest. If I were to do the race again, I would break this section up and include another leg elsewhere. Mentally, that would be easier to deal with.

Food was an issue, particularly in India where they don't eat much breakfast. It was difficult getting enough calories in the morning. I was happy when I got to Australia and got back to eating breakfast again, but I lost weight there when I got sick. In the end, I think my biggest challenge was forcing myself to carry on. This apathy is not something that you can prepare for; it undermines your desire to finish the tour. You can become quite lazy about getting out of bed.

Since I finished the race, I've been riding my bike plenty. It's good to keep the legs moving and there's some racing I'd like to do next year. I do better in the longer races, but I probably won't be attempting another one like this for a while." 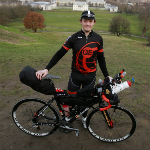 Mike Hall circumnavigated the world by bicycle in just 92 days.
Post to: