Europe’s top hoteliers gathered in Cyprus in April for EHMA’s 43rd annual general meeting. Major topics of discussion included the evolution of the luxury experience and how best to engage the next generation of hotel leaders. Phin Foster travelled out to the Mediterranean island to hear from an association and its members committed to rising to the challenges and opportunities presented by a rapidly evolving hospitality landscape.

As a stepping stone between occident and orient, Cyprus felt like a particularly apt destination for this year’s European Hotel Managers Association annual general meeting, held 7–10 April. Not only is the Mediterranean island rightly famed for its hospitality – something that the assembled delegates had plenty of opportunity to experience for themselves throughout their stay – but the hotel industry also finds itself at something of a crossroads.

The emergence of the sharing economy; the growing dominance of global brands; the proliferation of new technology and platforms; the shifting behaviours and demands of new guest demographics: it can seem as though the sector has never before experienced such rapid and seismic change.

This is particularly true in the high-end segment, which been has posed some fundamental questions in recent times about what now constitutes a luxury experience and to what extent the traditional ways of doing things, for so many years a cornerstone of five-star service, are still fit for purpose.

Where better to address and attempt to answer these quandaries than in the company of some of Europe’s finest hoteliers. Indeed, these are questions that EHMA has had to ask itself in recent years. Conceived in Rome in 1973 by five of the city’s top general managers as “an association of professional managers operating first-class or luxury hotels of international repute committed to fostering fellowship and fraternity” – the first general meeting was held at the city’s Hotel Ambasciatori the following year – this is an association that has witnessed its fair share of change.

Among EHMA’s first 40 members, only ten were non-Italians; by the 20th general meeting, its 380 members were drawn from 20 nationalities. At the cocktail reception at the Amathus Beach Hotel – which, alongside the recently renovated Four Seasons, hosted proceedings – one found a veritable European Union of hoteliers committed to enjoying themselves having braved striking Greek air traffic controllers earlier that day.

The strike was indicative of continued financial and infrastructural struggles in the region, but one gets the general sense that Cyprus is a destination on the up. The meeting’s organising committee included the general managers of Amathus Beach and Four Seasons, Andreas Georgiou and Nick Aristou, as well as Stephanos Stephanou of AKS Hotels, Michalis Evangelides of Marismare Hotels, Adams Beach Hotel’s Harry Georgiou, Giorgos Ioannou of Le Meridien Limassol, Hotel Atrium Zenon’s Nicos Michaelides, Christos Papamiltiadous of the Elysium Hotel and Atlantica Hotels & Resorts’ Petros Theodoulou. They not only proved to be the most gracious of hosts but also offered unparalleled insights into developments on the island.

“We had a tough period,” Aristou told me later in the weekend, acknowledging that the fall in Russian travellers had
also had a more recent impact. “But I do feel that Cyprus is entering a very good place right now. Arrival numbers
are up significantly and, with instability elsewhere, it seems a particularly attractive destination right now.”

Of course, this was before the UK voted to exit the EU, which, for a market so dependent upon British travellers, is bound to have a knock-on effect, and may force Aristou and his peers to think even more deeply about how best to attract and retain new guests. Fortunately, this was exactly the place to be for such advice and the sharing of best practice.

The theme of this year’s event was ‘Drivers and trends of luxury hospitality’, a topic EHMA president Hans Koch acknowledged was becoming increasingly urgent for members to get to grips with. “Yes, we have to respect traditions and remember what makes us different,” he said upon opening the general assembly the following morning. “But it is also essential that we do not stand still: we must continue to learn and make ourselves relevant to the next generation.”

This observation rang true for EHMA and the luxury segment as a whole, and the 43rd AGM witnessed five new members being welcomed into the association for the first time, bringing total membership up to 424. Much of the conversation surrounded efforts to bring new talent into the group, something Koch felt current members could play a major part in promoting.

“It’s important we keep our eyes open,” he told the assembled delegates. “It’s up to all of us to make people understand that EHMA is a valuable place to be in their profession and really announce ourselves as EHMA members. This is a wonderful organisation, and we must all do a better job of promoting that fact.”

It is a task Koch has been entrusted to spearhead for at least another two years, as he was re-elected for a further term. Two vice-presidents were also announced: Verena Forstinger, general manager of the Radisson Blu Style Hotel in Vienna, and Albert Rouwendal, Mövenpick Hotel Amsterdam City Center general manager.

All three are EHMA stalwarts committed to building upon its success, but a major issue facing the association, and others like it, is generational. “There’s just so many groups and bodies these days that it’s extremely difficult to know which are the ones that will best serve your interests and career,” Michael Gray told me over lunch. “What’s more, hotels are far more hesitant about sponsoring membership, and this adds a financial pressure. You really need to convince people of the value.”

EHMA’s national delegate for the UK and Ireland had retired from his role as area vice-president and general manager of the Hyatt Regency London – The Churchill only a few weeks before and, while he admitted that he was greatly looking forward to a well-deserved holiday in Dubai once the event was over, Gray remains a major cheerleader for the association and the significance of membership.

“It’s been invaluable,” he continued. “You have the opportunity to meet and mingle with people who are not just
your peers but also the very best in the business. I’ve always said that if I can return to my hotel with just one idea about something I can do to perform my job better, it’s been worth it – but I always come back with so many more.”

Former EHMA president Peter Bierwirth agreed. “Yes, it’s always been a great opportunity to get together with old friends for lots of good food and wine,” he laughed. “But we must also reflect on what is happening in our industry, and generate and discuss ideas about how to rise to all of these new challenges. You have so much talent and experience here, and it’s never been more important that we all make use of that.”

Perhaps the most significant announcement at this year’s event concerned how the next generation of hoteliers are going to be brought into the fold. ‘Young EHMA’, a collaboration with Mise en Place and Servicecenter 4Hospitality, is an initiative that seeks to discover upcoming talent with the potential to become future members. A programme will run in parallel with next year’s event, targeting 40 participants – a number the organisers hope to double in 2018, with the eventual target being 500 Young EHMA members.

It has the potential to transform the organisation, and the sharing of knowledge should work in both directions. As music producer, TED Talk denizen and ‘cyberphilosopher’ Alexander Bard explained during his wide-ranging keynote presentation, a highlight of the following day’s programme: “Today’s 20-year-olds will not change into today’s 40-year-olds; instead, 40-year-olds must move in the opposite direction. Unless you want to be part of the digital environment, you’ll be out of business within ten years. Once we adapt, we never go back.”

The Educational Day was jam-packed with similarly insightful observations and hard truths. “I struggle with the word ‘luxury’,” strategic marketing and management expert Professor Dimitrios Buhalis, head of the Tourism and Hospitality Department at the University of Bournemouth, told the room. “Any hotel I ever work with is banned from using it. ‘Luxury’ is the great dream of the hotelier, but it means so many different things to so many different people.” He instead advised hoteliers to “co-create” experiences with their guests.

The previous night had witnessed delegates enjoying a traditional Cypriot banquet – complete with raucous dancing, and the throwing of flowers and napkins – in the heart of Limassol’s old town. The final evening saw the Four Seasons host the gala black-tie dinner, a fixture of the AGM and a wonderful opportunity to reward members for a successful year.

The EHMA Sustainability Award by Diversey Care 2016, dedicated to the best project of sustainable hospitality of the year, was won by Ivan Artolli, managing director of the Rocco Forte Verdura Resort in Sicily, who has implemented an array of environmental initiatives since his appointment in 2014.

Pierre Ferchaud, general manager of Monaco’s Hotel Metropole, was named Hotel Manager of the Year. In an emotional address, the Officier de la Légion d’Honneur and holder of a Chevalier de l’Ordre National du Mérite paid tribute to the role his family had played in helping to drive and underpin his success. “This is a wonderful profession,” he told his fellow attendees, “but it is also very difficult. I could not have done it without them.”

It was a fitting finale to a successful, valuable few days. The Netherlands will host the 44th AGM in 2017, taking place 17–19 March at the Grand Hotel Huis ter Duin, a five-star property in Noordwijk aan Zee on the North Sea, 40 minutes from Amsterdam. Further details can be found at www.ehma.com. 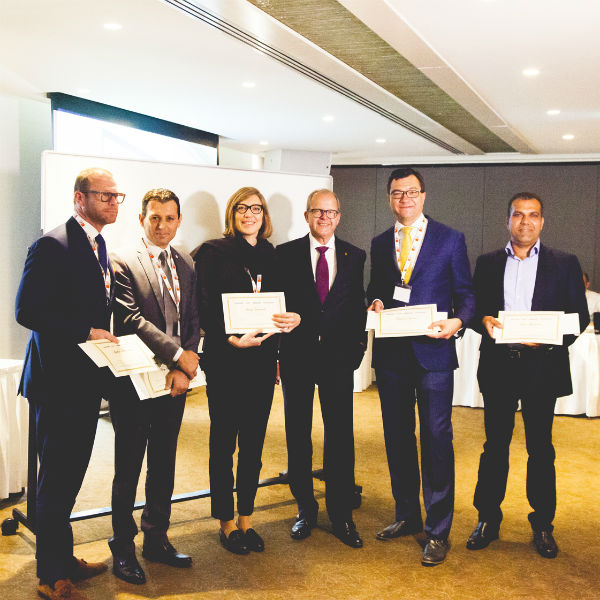 Along with the excellent food provided by the meeting’s co-hosts, the Amathus Beach Hotel and the Four Seasons, the conference theme, ‘Drivers and trends of luxury hospitality’, gave delegates plenty to chew on. 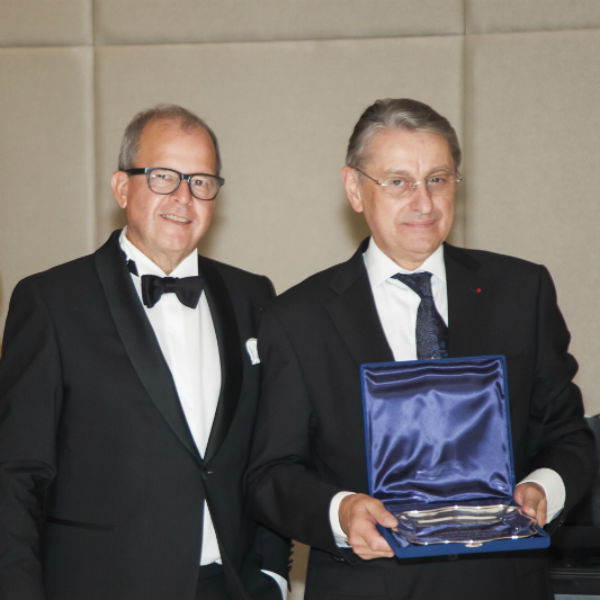 Hans Koch with Hotel Manager of the Year Pierre Ferchaud of the Hotel Metropole, Monaco.
Post to: