Early next year will see the opening of Pan Pacific London, the Singaporean group’s European debut. The design has been led by Yabu Pushelberg, a company that’s no stranger to working on landmark hospitality projects. Ross Davies meets its co-founders, George Yabu and Glenn Pushelberg, to discuss their vision for the property.

As first forays into the European hotel space go, Pan Pacific Hotels Group’s debut in London is as ambitious as it gets. Originally scheduled to cut the ribbon on Pan Pacific London in the autumn of 2020, the opening of this 237-room property, situated at One Bishopsgate Plaza, in the heart of the Square Mile, is now been put back until early-2021, but that has done little to dull the excitement.

A stone’s throw away from the likes of 30 St Mary Axe and The Leadenhall Building – both famous totems of London’s skyline, better known as the Gherkin and Cheesegrater respectively – Pan Pacific London will, according to the group, appeal to “well-heeled travellers who seek to find a balance in life”.

It promises to be a hotel of firsts. It is the only hotel in London with an entire level given over to wellness, which includes an 18.5m infinity pool overlooking the plaza below, as well as sleeping pods, treatment rooms, a gym, steam rooms and saunas.

It will also house its own 476m2, double-height ballroom, which will hold the distinction of being the only dance hall in the Square Mile. Elsewhere, Pan Pacific London promises to have more landscaped outdoor space than any other luxury property in the area, claims the group.

Described as ‘veritable urban retreats’, the guest rooms and suites have been designed by Yabu Pushelberg, an international company with a portfolio of projects that includes Four Seasons’ properties in Toronto and Tokyo the W Hotel, Times Square, the St. Regis Hotel San Francisco and the Viceroy Maldives Resort.

Having already been involved in an array of blue riband projects since its launch in 1980, one wonders how the Pan Pacific London compares with these other properties. But when put to one of the company’s co-founders, George Yabu, he dismisses the question out of hand.

Out of the box

“We are not in the business of comparing one project to another, as it’s never as simple as black or white, or good versus bad,” he explains. “The act of comparing puts ideas into a box and, for us, boxes only serve to create limits. As designers, our role is to create unique, incomparable experiences.

“It is much more valuable and productive to reflect rather than to compare, and we do this with each and every one of our projects, from initial conception through to its completion and the manner in which guests engage with the design years down the road.”

In fact, Pan Pacific is not the only high-profile upcoming London debut to have its interior designed by Yabu Pushelberg. The company has also lent its elegant eye and touch to The Londoner, a new property from British group Edwardian Hotels London, which was originally set to open its doors in June 2020 in Leicester Square, in the heart of the city’s West End.

At the risk of repeating the same question, how do the properties contrast, given that they occupy two culturally opposing parts of the same city? “Both hotels have their own unique voice,” answers Yabu. “The Londoner, for example, is an outspoken, theatrical hotel housing moments of drama for guests to enjoy alongside their journey.

“It fully draws in and personifies the unique character of the neighbourhood in which it’s housed. Pan Pacific’s personality offers an entirely different experience. This is the story of a Singaporean brand coming to London for the first time.”

Returning to the property at One Bishopsgate Plaza, the central plank of the design brief handed down to the company, says Yabu, was to balance elements from one of the most distinctive cities in the world with the operator’s Asian heritage, but “without falling flat on metaphors or symbolism”.

“Drawing a parallel, Pan Pacific London is a Turner landscape painted with a Chinese brush stroke,” muses Yabu. “One element truly demonstrative of this is the custom artwork that can be found throughout the hotel. In the guest rooms, above each headboard is a hand-painted mural depicting varying trees native to the UK.”

This two-cultures-collide approach punctuates other spaces of the hotel, including its all-day dining restaurant, which was designed in tandem with En Viu. The New York-based artist studio is a long-time collaborator of Yabu Pushelberg’s, the two having worked on other hotel projects, including most recently the Marriott’s The Times Square EDITION in New York.

The dining space, which includes murals “depicting botanicals native to the brand’s birthplace” felt “organic rather than trite”, says Yabu.

The realm of hospitality

With a focus on interiors, furniture and product design, Yabu Pushelberg does not operate solely in the realm of hospitality, it also works on high-end residential and retail projects. What are some of the unique challenges and factors that need to be accounted for when designing a luxury hotel room compared with, say, a luxury department store in a Chinese shopping centre?

“From our point of view, hospitality design extends to retail and residential projects,” says Yabu’s partner and co-founder Glenn Pushelberg. “Any environment in which people share public and private spaces to interact, engage, communicate and connect falls under hospitality.

“From waking up in a six-star hotel room or experiencing a gourmet, Instagram-worthy brunch to sipping coffee at a hole-in-the-wall café; from finding your evening party look at a department store to hosting a private meal at your home. All of these touch on human experience, which means hospitality plays an important role in their equations for success.”

Despite Pushelberg’s mention of Instagram – the hallowed domain of today’s influencers and marketers – Yabu insists the company has “never been one to follow trends”, especially when it comes to luxury interiors. Nonetheless, one movement it supports unequivocally is environmental consciousness, which Yabu hopes will one day become a standard across the industry.

“With the world’s current climate, it is important for us to stress to our designers the impact of using certain materials and ensuring we think about how our contribution to design reaches beyond current trends through to tomorrow,” says Yabu. “It’s like fast fashion and long-lasting pieces – invest in what will last.”

The size of the infinity pool overlooking the plaza in the Pan Pacific London Hotel.

It has been 40 years since Yabu and Pushelberg started out in Toronto. (“Isn’t it wild how time flies?” reflects Yabu). In that time, the world of interior design has cascaded across a number of styles and trends, from the pastel and chintz-heavy 1980s, and the minimalism of the 1990s and early noughties, through to today’s mash-up of, seemingly, everything that’s gone before.

The underpinning element of the company’s success has been its ability to move with the times. In recent years, it has focused increasingly on furniture and objects, beyond its traditional bread and butter of design interiors.

“A part of this four-decade milestone is celebrating our growth from an interior design studio into an immersive creative agency,” explains Yabu. “Although our practice began as interior designers, we have learned through years of experience and honing our voice that our visions cannot be fully recognised if we do not have complete creative control over a project’s identity and the experience being crafted.

“Years ago, we committed to evolving the studio to allow for full ownership of the design process and built teams of experts in interiors, product, lighting, building design, styling and graphics to help us transform concepts into reality. Our mission is to create the world that we want to live in.”

“As an integrated practice, all our specialities sit at the same table,” adds Pushelberg. “It’s a true collaboration, not just various trades under one roof. It’s the only way to create the kind of cohesive experiences that actually matter to the guests and make you feel something.

“It also means we can touch every single element of the experience; from the overall vibe of a room to the couch you sit on and to the wine glass you sip from to the Instagram account that lured you there in the first place. No detail is too small and we love the details, because they are where the magic happens.”

By way of highlighting this broad-church approach to things, last year the company opened a new, three-floor studio in New York’s Tribeca neighbourhood.

One level of the new space is designated as a hub for design teams and collaborators to come together and create, “whether it be an art installation, a party or exhibition”, says Yabu. “We’re constantly thinking about what we can do next. Now we have the blank canvas we have always wanted to make our dreams a reality.”

The Londoner, originally set to open June 2020 in Leicester Square, is another property in the UK capital on which Yabu Pushelberg has recently worked.

View of the Pan Pacific London hotel, due to open in autumn 2020. 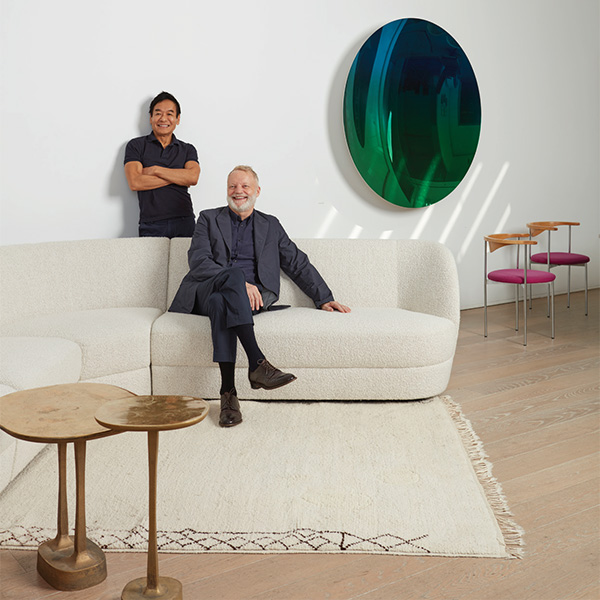