Transforming the check-in experience and designing more dynamic social spaces is a focus across all segments of the hotel industry. While some are swapping the traditional front desk for apps and tablets, others are focusing on getting guests out of their rooms and bringing in a more local clientele. Will Moffitt discusses the vital ingredients that go into making the lobby a destination in its own right with Hasan Yigit, vice-president of Jaz in the City, Jérémie Trigano, CEO of Mama Shelter, and Jay Stein, CEO of Dream Hotel Group.

“Over the years I have noticed that many hotels – even new ones – still offer the same conventional concept, they basically all look and feel the same,” says Hasan Yigit. “What I’m looking for when I’m travelling is a feeling of having finally arrived.”

Leaving the family home at 17, and working and travelling in the Middle East and Europe, it’s a feeling that Yigit has long sought after, a sensibility that he now channels as vice-president and managing director of Jaz in the City, Deutsche Hospitality’s select service lifestyle brand. It’s also a neat way of looking at the changing dynamic of the hotel lobby. Once an efficient, but frequently bland and impersonal space, the foyer used to be a transitory and transactional realm, somewhere you visited when you had to and left when you didn’t.

Increasingly, however, operators are looking to activate the space, creating an array of attractions and activities to entice guests and locals alike. Naturally, such developments are symptomatic of a wider trend, with hotels of all segments and sizes seeking to create the kind of personal, locally grounded experiences that Airbnb and a new breed of hostels promote.

Music to the ears

For Yigit, the lobby space presents hoteliers with a raft of opportunities, the most important being the chance to make a statement and impress a guest from the outset.

“The feeling of arriving is one of the most important moments in a hotel,” Yigit says. “That’s what makes a booking decision. People want to arrive somewhere homely and not just at a standard service desk.”

At Jaz, guests might encounter spinning turntables as a spontaneous house session breaks loose in the foyer. After a swift check-in they can head to the lounge area – dotted with bare wood panelling and splashes of colour – where local musicians can showcase talent.

“That experience is integral to the Jaz in the City concept,” Yigit says. “No intimidating reception that makes you feel out of place. Band members – that’s what we call our employees – that treat you like a homecoming friend and are happy to share their local tips and insights with you.”

With properties in Amsterdam and Stuttgart, and new venues in Vienna and Dubai opening in 2020 and 2022, respectively, it’s a concept that the brand is keen to mould to each location. After all, as Yigit notes, it’s this embrace of local culture that gives each hotel its unique identity. Located beside the hulking Ziggo Dome, the flagship property in Amsterdam is renowned for its house music, while in Stuttgart there is more of a nod to the German hip-hop scene.

It’s an approach that Yigit believes is becoming more commonplace, partly because Airbnb and hostels “stand for a less complicated, direct access to a destination”, a form of travel that inevitably fits the needs of millennials, who want to experience their destination like a local. “Authentic information about the city at first-hand, that’s what the millennial target group wants,” explains Yigit.

For Yigit, this can also work the other way around, with a lively atmosphere bringing in locals, and providing food and beverage opportunities. The aim, Yigit says, is to turn these communal areas into vibrant, versatile spaces. “Coffee shops; pop up stores; meeting corners; in a nutshell, everything that motivates waiting guests and locals to spend time in an otherwise dead area. That’s the key,” says Yigit.

At Jaz, guests can head to the ‘Rhythms Bar & Kitchen’ to enjoy locally sourced dishes, and listen to live acts in the lounge. Meanwhile, there are enough cosy corners and workspaces to encourage some form of productivity, even if the background beats are a little loud for some.

This reflects a wider trend amongst hoteliers to remodel their workspaces to create productive, comfortable co-working spaces. Accor, for example, has recently announced plans to establish 1,200 WOJO sites in less than three years, a figure that will make it Europe’s largest co-working brand.

“These outlets are tailored to local needs, and they’re a meeting place and hotspot,” Yigit says. “Our guests feed off that vibe and it means that they don’t necessarily have to leave the hotel to be part of the city… [These areas] need to be as open to the location as possible. No standard lobby that keeps locals from entering a hotel. An innovative lobby offers an intelligent, mixed-use concept.”

For Jérémie Trigano, CEO of Mama Shelter, it’s imperative that these spaces blend in with the local area, creating the sense that the property is an organic part of the neighbourhood, rather than a stand-alone project.

It’s a philosophy the brand has championed since it launched its flagship property in the working class Parisian district of Bagnolet. Now operating under the Accor umbrella, Mama Shelter’s new London offering is another hip, fun space, nestled between Tower Hamlets and Hackney, a spot that bears striking similarities to its first.

“Hackney is very similar to Paris East, it’s a residential neighbourhood with wonderful local shops: barbers, butchers, organic grocery stores, speciality coffee roasters and breweries,” Trigano says. “We immediately fell in love with the location, and we wanted it to become a place for locals and travellers to interact.”

While Mama London serves local delicacies – the East London Iced Platter features traditional British jellied eels – it retains some of the brand’s characteristic quirks: there are Japanese-style karaoke booths off the main lounge area and ‘ethical’ pornography is available on-demand. As the messages emblazoned on the walls clarify, the most important thing for a guest to remember is that “Mama loves you”.

Rather than a formal, detached lobby space, the hotel has a large lounge area with a check-in desk next to the bar and restaurant: “We don’t have lobbies,” Trigano says. Instead, the aim was to create a comfortable space where guests “are immediately immersed in the heart of the action”.

61%
People would rather be greeted by an individual than a technological device.
Ipsos

While the group has experimented with automatic check-in procedures and kiosks, Trigano sees them as detrimental to the warm, inclusive atmosphere these hotels are trying to create.

“We were one of the first [hotel brands] to try check-in kiosks, but we realised it was an ‘anti-mama’ experience, not to mention the fact that technology didn’t work,” Trigano says. “Instead, we try to emphasise the human element by keeping the reception and making them a standard feature in all of our hotels. At the end of the day, what matters most is the person in front of you.”

A recent survey by Ipsos supports this theory. The research, conducted across six countries on behalf of Ibis, revealed that 61% of survey respondents would rather be greeted by an individual than a technological device, indicating the challenge of giving people a seamless check-in, but with a human touch.

For Jay Stein, CEO of Dream Hotel Group, while technology is changing the way some lobbies operate, most tend towards a more standard front desk model.

“We have moved some of the properties to check in by iPads with no front desk at all, but we haven’t made that a standard thing,” Stein says. “We haven’t made a company decision that that’s the way the industry is going and therefore we shouldn’t have front desks in any of our hotels. A majority follow the more traditional approach.”

“There are always smarter ways of using a hotel’s public spaces,” Stein says. “It all links to this notion of ‘Is your hotel there for the community or just for the hotel guests?’”

Dream Hollywood leans towards the former, employing creative methods to bring in locals, turning its lobbies into events and spectacles in their own right.

“We’ve done some fun things in our public spaces,” Stein says. “We did a celebrity hair salon, offering a $300 haircut for the stars, serving champagne. We did it right in the centre of the lobby, not one flight downstairs, take a left and it’s behind the gym... we wanted it to be right where guests could see it.”

There was also a tattoo parlour: an idea that began with a mural drafted by New York graffiti artist James Goldcrown and ended with a queue snaking through the foyer.

“We had James doing his graffiti art in our New York hotel,” Stein says. “He painted a 40×20ft heart on the wall for Valentine’s Day and then we got Evan Kim, who is a famous tattoo artist, to sit in the lobby doing free tattoos of hearts.”

Stein admits that he had to get a lot of legal approvals for that one, but it was worth it. “We ended up with a huge queue of guests and social media blew up,” Stein says. “It was just great press for us.”

It’s tempting to see these acts solely as publicity stunts targeted at Instagram-loving millennials, but there is a concrete business philosophy behind what Dream is doing, using more unorthodox methods to raise its profile and garner local customers.

Naturally, Dream does not employ the same approach with all its hotels, crafting its spaces to match specific environments. For bigger chains that rely on more of a cookie-cutter approach, turning lobbies into creative social spaces is always going to be difficult.

“It’s harder for bigger brands to integrate this approach into their company models. Obviously, it’s much more difficult to bring that local element to every Sheraton,” Stein says. “We look at what will work in a particular market and a Dream hotel in Bangkok is not going to be the same as the one in Seattle or Nashville.”

Even for Dream, this dual focus between guests and local customers is a delicate balancing act, one that occasionally swings too far towards boozy fun. “When the hotel is really rocking it does cause problems. It’s usually the hotel guests that end up not being happy, because there’s too much commotion,” Stein admits.

Nevertheless, the quest to build more compelling and dynamic lobby spaces continues to influence the industry, a move brought about by a changing attitude to hospitality centred on personal, locally grounded experiences. Ultimately, as Yigit says, “It’s about getting rid of otherwise dead or unused spaces.” Done correctly, it might also breathe new life into the hotel experience. 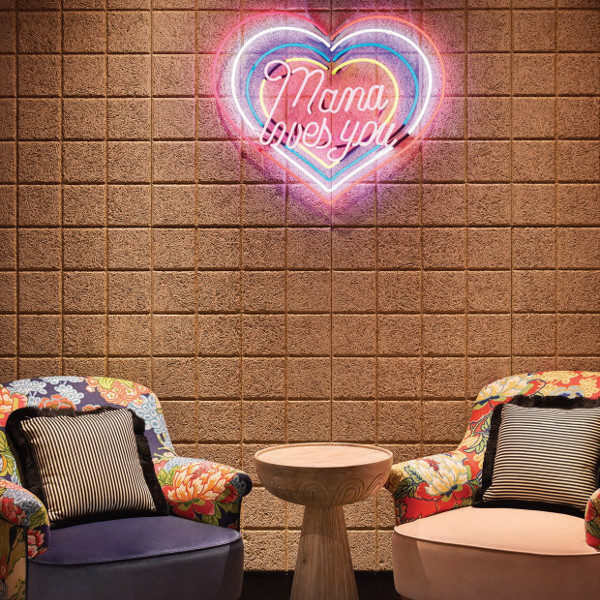 The walls of Mama Shelter’s London building, emblazoned with the brand’s slogan, ‘Mama loves you’. 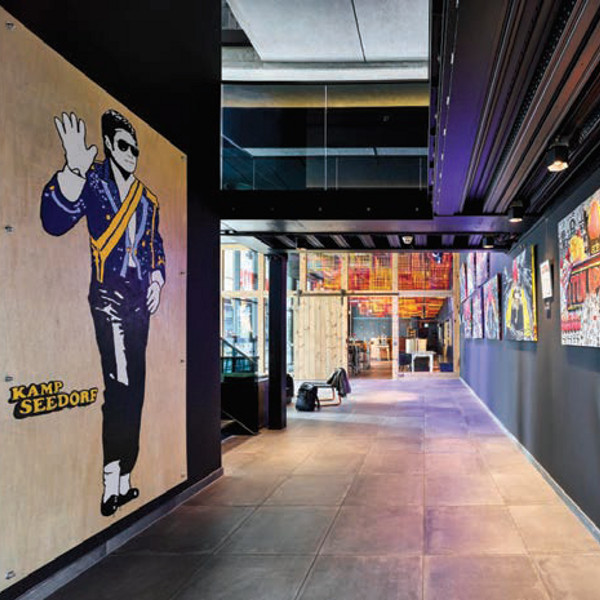 Jaz in the City, Amsterdam: dotted with bare wood panelling and splashes of colour, the lobby provides a space for local musicians to showcase their talent.
Post to: