If interior architects are the rock stars of the design world, landscape artists are all too often treated like the backing singers. However, in a number of properties, particularly in the resort space, guests will spend far more of their waking hours within carefully sculpted outdoor environments than anywhere other than the bedroom. Michael Shaw talks to John Krizan of Krizan Associates and John Goldwyn, vice-president and director of planning and landscape at WATG, about the emergent phenomenon of the ‘landscape hotel’.

By the time dinosaurs roamed what is now Sedona, Arizona, the ochre sandstone beneath their feet had already been in place for tens of millions of years. The landscape today is little changed. Venture due north of this Arizona town and you find a similarly arid, dusty expanse, devoid of grass and split like dry skin with dead gullies. Look up towards the horizon and vast sandstone tumuli jut out of the earth like worn teeth, a backdrop familiar to generations of cinemagoers as, simply, ‘The West’.

It will be a view captured wholesale by the guests staying at Ambiente, North America’s first landscape hotel. Overlooking not only the red rocks above Sedona but also Coconino National Forest, the property consists of 40 separate rooms raised above the ground with the aid of steel piers, where guests will gaze out onto the horizon through floor to ceiling bronze-tinted windows.

Hired as the landscape architect for the project, John Krizan hopes that the property – due to open in 2020 – will allow guests to feel a part of the landscape. In the evenings, the designer imagines the Ambiente’s guests watching the sunset out from the unit’s rooftop decks and then, as the light begins to fail, up towards a galaxy of stars unobscured by city lights. He is, Krizan admits, in “awe of the natural landscape beauty of this place”.

It is a far cry from the original plan for the site. “It was basically just this big block of a building, and they levelled the site,” Krizan says. “It was kind of an example of what you would never want to do. And so, we just threw out the concept.”

Together with ASUL Architects, Krizan embraced the natural elevation of the site, which he estimates varies by as much as 40ft. The use of stilts to raise the rooms above the treelines eliminated any practical need for large-scale grading of the site. “It also has some natural drainage channels and swales,” Krizan says. “We were able to preserve those as well, and we’re adding new streams to that so we’ll have this water feature running 24/7… It’s just going to have a really incredible ambience.”

Ambiente is the first landscape hotel in North America, a typology that turns the conventional aesthetic formula of mainstream hospitality inside out. For as long as hotels have existed, the use of design has focused the eyes of the guest outside in, towards the interiors or, in some cases, to the grand or daring exteriors of the building itself. What Ambiente does is shift the focus, away from the confines of the room to the broad possibilities of the horizon. The guest, in short, is no longer in a hotel. They are a part of the landscape.

Ambiente may be the first of its kind in North America, but the design template was set in Europe. With floor-to-ceiling windows and a brisk, minimalist aesthetic, the Juvet Landscape Hotel is ironically less famous for its views than its appearance as the home of a reclusive tech billionaire in Ex Machina. A visit to the property, however, will reveal several rooms above and at the treeline borne aloft by stilts, a manifestation of the architect’s veneration for its glacial environs.

“The intention was to make a protected room that was as much as possible out in the landscape,” explained Jan Olav Jensen to The Guardian. “We wanted to give the feeling that you’re outside even though you’re protected inside.”

Several architects continued to play with the same concept. At the Treehotel in Harads, Sweden, Tham & Videgard Arkitekter suspended the ‘Mirrorcube’ – a room clad entirely in mirrored glass – round the truck of a pine, shortly to be followed by The Birds Nest, a wooden room wrapped tightly in twigs. The Sacromonte Landscape Hotel in the mountains of Maldonado, Uruguay, expanded the form outward to encompass several prefab cabins scattered across a vineyard like sugar.

This is not to say that the emergent landscape hotel consists of little more than a series of cabins in the wood. Careful attention is paid to every aspect of the grounds, from the placement of the individual rooms to the elevation and manipulation of water resources on the property.

“There’s an art to it,” Krizan says. “Being able to determine where everything should be going, making sure that the elevations are correct… being able to do that and make it look natural, it’s truly so enjoyable.”

It seems to be a winning formula, one that John Goldwyn believes actually owes its lineage – ironically – to an increasingly homogenous hotel aesthetic. “The landscape character of hotels was far more based on an American prototype, which was very much this sort of country club, resort-style approach to things,” explains WATG’s director for planning and landscape. It was after being faced with this cookie-cutter philosophy to hotel design that architects began to think about how to increase the importance of landscaping in the overall project.

“So, you start to see a kind of genius loci, or spirit of place, that really starts to work through the project,” says Goldwyn. “It’s far more based on place than it is an aspiration of being what the American hotel would want, or would have wanted, 15 years ago.”

As such, the WATG architect sees new opportunities in contextual landscape design everywhere. For now, inclusivity is Goldwyn’s watchword. “If you engage people’s senses, it’s not really about the way places are looking, but it’s what they do to you – how they move you emotionally,” he says. “I think, with a landscape, it’s really easy to immerse people in these really kind of magical, luxuriant, otherworldly places.”

“If you engage people’s senses, it’s not really about the way places are looking, but it’s what they do to you – how they move you emotionally.”
John Goldwyn

Take the Zorlu Centre in Istanbul. Designed by WATG and opened in 2013, the client had originally requested a layout reminiscent of New York’s Times Square, a concreted urban space that would serve as a focal point for commercial life in the Turkish capital. Goldwyn convinced him to adopt a greener approach.

“Instead of delivering the expected hard, landscaped piazza, we ended up delivering a very soft design,” he explains. Goldwyn and his colleagues planted 500-year-old olive trees around the plot, planted wildflower meadows and constructed soft play areas for children. His team created, in effect, an urban oasis for young and old, where “kids from the city have the chance to go and see the butterflies, and look up at the sky and lie underneath the olive trees”.

When it comes to WATG’s work in hospitality, though, Goldwyn wants to go further than simply inviting nature in to play. In one project currently under construction in Crete, his team have proposed placing the entire hotel underneath a vineyard, leaving the trellis above completely undisturbed. Goldwyn is proposing to do the same for another commission at an olive grove in central Italy.

“Your guest is then immersed within the olive grove on a terraced, bucolic Tuscan landscape,” he says. “I think, particularly with rural hotels, the idea of a cultivated landscape works very nicely with the notion of a resort, because so many of the reasons we go to great hotels – for nice wine, and nice food, and beautiful local ingredients – you can blend them back easily into the landscape dialogue.”

More than that, he wants guests to be able to experience the surrounding landscape using all of their senses. To that end, Goldwyn’s team recently began working with the Royal Botanic Gardens to understand what the best plant palettes are and how best to construct what he terms the ‘edible landscape’ – a concept that WATG has been toying with over the past five years.

They’ve even begun to consult a psychologist on how best to weave mindfulness through WATG’s projects, a way of approaching design by thinking not “about the way that places look, but thinking about the way they feel”, says Goldwyn. “Because that’s, if you like, the holy grail of a fabulous hotel: somewhere where people feel that they’re feeling better than they would be if they weren’t there.”

The question is, though, how long that feeling can last. Krizan for one is confident that Ambiente’s example will spur the creation of other landscape hotels.

“I’m really surprised that it hasn’t caught on more,” he says. “Being able to see the project built out, it’ll really hit home with that idea and that concept. And I would think it’s going to be replicated and built on.”

Goldwyn agrees that imaginative landscaping is moving up the agenda of hotel designers. In his mind, it’s a natural and enduring reaction to the way operators have ridden roughshod over project sites in pursuit of an unchanging hotel typology.

“To me, if you fly a drone camera over a kind of resort hotel, you don’t want to see, suddenly, everything popping out as bright green, overirrigated, over-fertilised,” says Goldwyn. “To me, that’s sort of vulgar. I think there’s something much nicer about the notion of things looking like they’ve grown in, and are much more organically approached. And again, that contextualises things.”

This is perhaps unsurprising to hear from a landscape architect like Goldwyn. And yet, the lack of attention up until this point among operators towards landscape design suggests that the sector will continue to innovate in this space. 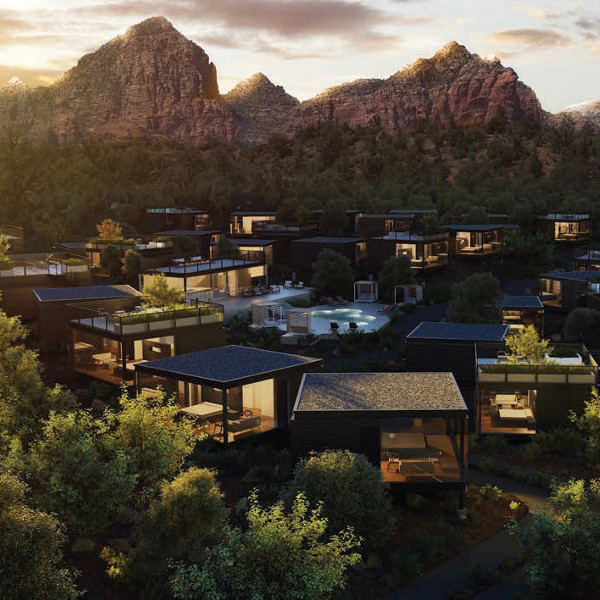 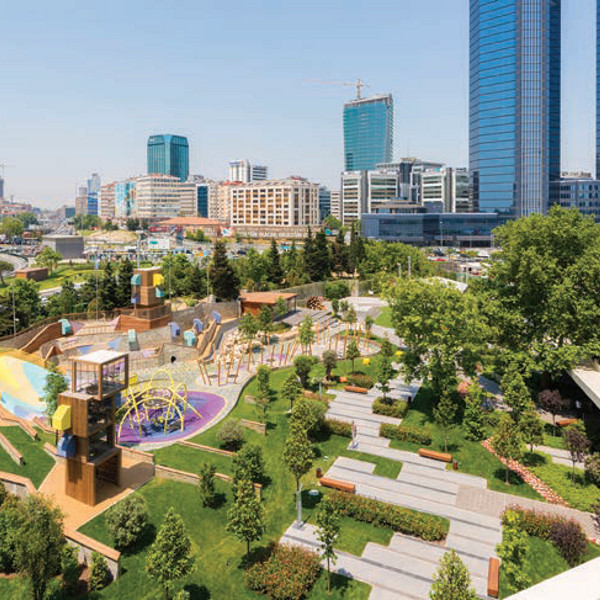 Zorlu Centre, Istanbul – designed by WATG and completed in 2013, the designers convinced the client to create this urban oasis over a concreted space. 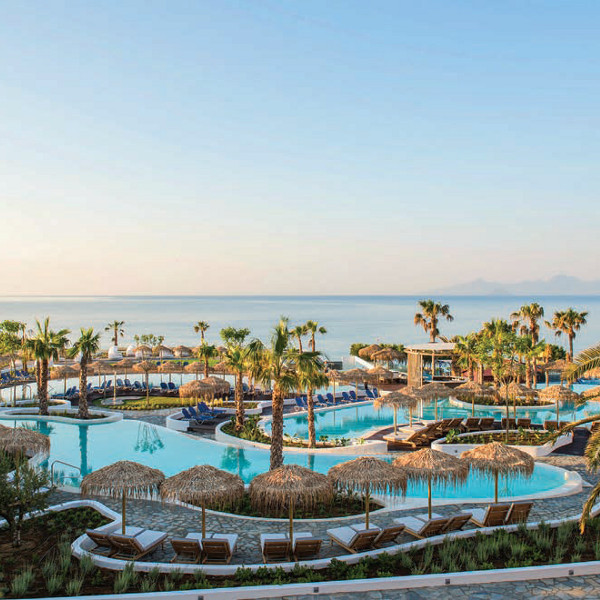 Mitsis Norida Beach Hotel in Kos, Kardamena – as with WATG’s other projects, this hotel was designed to blend seamlessly into the landscape.
Post to: