It's all in the mix

Bruno Moinard is one of the most sought-after designers working today. After cutting his teeth under Andrée Putman and Jean-François Bodin, he became celebrated in his own right for his elegant hotel restorations, including Rome’s legendary Hotel Eden. Andrea Valentino talks to Moinard and his partner Claire Bétaille about striking a delicate balance between tradition and modernity, and what guests want from luxury hospitality.

At one point in the conversation, Bruno Moinard puts his success down to what the French call hasard – chance. “I travel all over the world, and take a lot of energy from the trips,” he says. “I feel like hasard is something we can count on to make great discoveries in terms of new people, new parts of the world or new projects.”

Certainly, people have discovered Moinard. His thoughtful blend of styles is now in high demand across the globe, landing him design gigs at some of the world’s most glamorous hotels. In the 1980s, he helped invent boutique hospitality through properties like New York’s Morgans Hotel. More recently, he has worked at London’s Dorchester, and Paris’ Plaza Athénée. Now, Moinard and his team at 4BI & Associés have just put the final touches on their latest project: renovating the Hotel Eden, one of Rome’s most venerable properties, and another illustrious member of the Dorchester Collection.

Whatever the job, a Moinard redesign starts and ends with authenticity, says Claire Bétaille, his partner at 4BI & Associés since 2012. “It’s extremely important for us to give each hotel a sense of place, and to give the guest an understanding of where they are,” she explains. “We also attach huge importance not simply creating a pastiche, but to develop places that live through time, and to respect the surroundings. For us this means providing the guest with a story – from the entrance to the bedroom – that tells something about the location.”

This philosophy did not develop overnight; it evolved through a mixture of nature and nurture: Moinard’s father was an upholsterer in the Norman town of Dieppe. Though he admired his father’s craftsmanship, his work was very classical.

Moinard’s unique mix of modernity and tradition only developed later, at Ecart Ecart, one of the most distinguished design firms of the last half-century. While there, Moinard got to learn from two industry giants: Andrée Putman and Jean- François Bodin.

Putman and Bodin influenced Moinard in different ways, he explains. “I mainly spent my first five years at Ecart Ecart with Jean-François,” he remembers. “I spent a lot of time with him, and learned a lot from his expression and the simplicity of his vocabulary. I also learned a lot about architecture and space with him.”

For her part, Putman helped shape Moinard’s decorative techniques, and throw out the more conservative influences of his youth. “I learned more about style, about accessorising, about furniture,” he explains. “A lot of her work was black-and-white. She had a really graphic style and the moment I met her, I began to move away from the very heavy, stylistic designs that I’d grown up with. She helped me to find my own way, and start on something new.”

It helped that Moinard got to share his ideas with some genuine icons of European fashion. “During my time with [Putman], I had the chance to meet really exceptional people,” he adds. “Karl Lagerfeld is just one example. There was also [Yves] Saint-Laurent, and other fashion designers of that time.”

Go your own way

In 1996, after 15 years with Putman and Bodin, Moinard felt it was time to “fly my own way” and start his own design firm. Though his old mentors were no longer with him, he eventually found a perfect partner in Claire Bétaille, who joined 4BI & Associés in 2007.

“We do projects together because we love working together,” she explains. “This is extremely important: you cannot do great work if you’re not comfortable in your day-to-day life and surroundings, and we love exchanging ideas and different points of view. Overall, we feel we complement each other.”

It’s likely that 4BI & Associés’ clients would agree with her. Although they are probably most famous for their hotel designs, Moinard and Bétaille have built a reputation for elegance through their other projects. A series of refurbishments for Cartier – fixing up boutiques from Milan to Tokyo – were praised for their individuality and attention to detail. Their renovations of private houses are similarly thoughtful.

For Moinard, the lessons gleaned from one project are useful elsewhere. “Our diversity – working for private clients, for hotels, for famous brands, and also doing a lot of museums and scenography – gives us a special understanding of cultural perspective,” he says.

Bétaille agrees. “With Cartier, for example, we gave each shop its own entrance hall, like a Parisian house, and then added a succession of rooms,” she says. “We transposed a domestic universe to the retail world. This is now something you see all the time, with people trying to apply the concept everywhere.”

These experiences loop back to the hospitality industry. Luxury properties can no longer rely on brand recognition alone, says Bétaille. Just like their Cartier shops, she feels the best hotels should now feel like a great house. "Most of the people staying in hotels now have great houses around the world, with all the comforts one can imagine," she says. "But what’s rare, and very much related to our brand of quality, are the people working in the hotel, and the quality of the welcome. This is what makes the stay memorable.

“From a design perspective, what we’re trying to do is produce something timeless, and something detailed enough to give the guest new experiences each time they come back. If our designs are good enough – for example, if we paid enough attention to the detail inside the wardrobe and the quality of the material – the guest will come back and say: ‘I didn't notice that last time.’ All this flows from the same place: understanding the importance of comfort in a private residence,and bringing it to a hotel.”

Initially, it was unclear if 4BI & Associés would have the chance to carry out this vision at Hotel Eden. “At the beginning, we were hired by the Dorchester Collection to just do bedroom refurbishments, and a few touch-ups,” says Bétaille. “Finally, step-by-step with the hotel, we got them to rethink their plan. Eventually, they allowed us to work on the hotel as a whole. It’s been a complete renovation.”

Just as well. Free rein has allowed Moinard and Bétaille to imagine the hotel as a unified entity, with spectacular results. A single aesthetic – what Bétaille calls a “thread” – runs from the belle époque reception to each of the 98 guest rooms. Soft gold ceilings lend the place a warm glow, in contrast to the black and white marble floors.

“Our aim was to create a timeless style,” says Bétaille. “We wanted the look to be antique and modern. This is the proper aim of genuine art. All the way down – through the library, reception and lounge areas – we mixed antique pieces with bespoke designs that we did for [the hotel].”

Other decisions reflected 4BI & Associés’ skill at giving their properties a sense of place. Pompeian paintings overlook the bar, while the hotel makes references to other Roman palaces, such as the Villa Medici and Palazzo Farnese.

“We wanted for the guest to enter into a really Roman atmosphere, to be able to recognise the places around the city,” adds Bétaille. “In the bathrooms, for example, we arranged to have massive basins and bathtubs, because we wanted to give the impression of Roman baths and all the big marble pieces that you can find in the centre of the city. Overall, this kind of detail is quite unique for a hotel. We’ve never seen it anywhere else.”

Was it ever difficult to dovetail comfort and tradition? “It was a constant back and forth to preserve this balance,” Bétaille smiles. “But it was very important. We wanted to create a really special feeling in the [hotel], because it was agreed with the Dorchester group from the beginning: this is not a corporate hotel.”

On this point, Moinard and Bétaille seem to have succeeded, at least in the eyes of its staff. “After we opened, the concierge said, ‘There are so many hotels around doing a pastiche of ancient times or of a time that never existed. But I was looking forward to seeing what you did,’” Bétaille recalls.

“Of course, he was saying this because he was pleased with the results. This was very important for us to hear.”

It has been an eventful summer for the team; as well as just finishing up in Rome, Moinard and Bétaille have recently completed work on the Four Seasons at Ten Trinity Square, a new property near the Tower of London. The partners stay busy in their spare time, too. Moinard is a keen artist and photographer, and uses his hobbies as a way of escaping the stresses of his job. “In our day-to-day lives, we have to deal with very demanding people, full of constraints,” he says. “So this part of our artistic expression is very free. It’s a time for freedom and expression.”

But even in these moments of calm, they find themselves drawn back towards the office. “Being alone in front of a canvas is a moment of freedom, but it’s not completely separate from our work,” says Bétaille. “We benefit from it, not only in terms of our personal well-being, but also as a way of attracting us to certain colours or compositions that come back into our work. Whether it’s accessorising a room or creating a carpet, painting acts as a source of inspiration.”

With focus like this, it’s little wonder that 4BI & Associés has enjoyed such success. Though Moinard might shrink at the idea, his firm’s triumph is clearly down to more than just hasard. 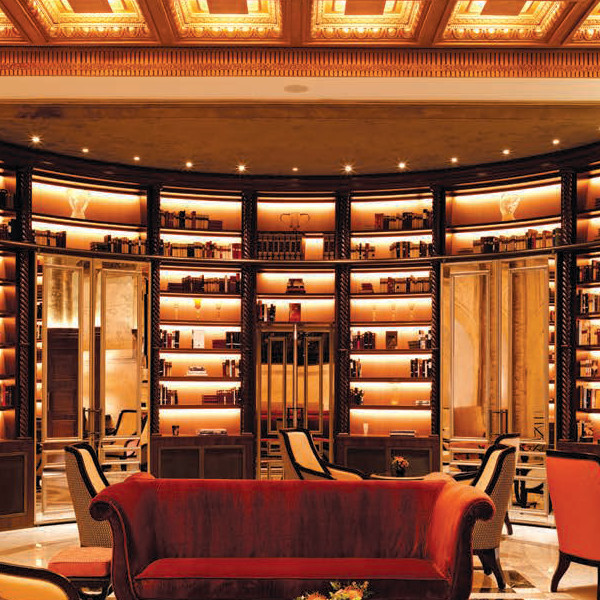 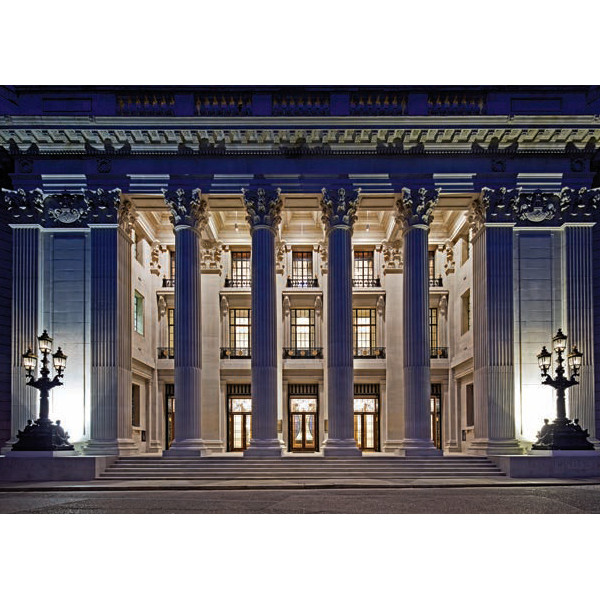 Bruno Moinard and his team at 4BI & Associés recently applied their artistic sensibilities to renovating the Four Seasons Hotel at Ten Trinity Square in London.
Post to: