In the lap of luxury

Long renowned as a haven for hedonism and partygoers, Ibiza has been diversifying its hotel portfolio of late, birthing luxury and wellness resorts designed for a more refined international clientele. Step in OKU Hotels, which will open a 184-room property in Ibiza this summer, formerly of Casa Cook ownership, and another 100-room hotel in Kos. Is OKU an update on the Thomas Cook concept or something entirely different? Will Moffitt speaks to Enrique Mandl, COO and general manager of OKU Ibiza, about his vision for a brand with grand aspirations.

The history of Ibiza is intimately bound up in its hotels. Stroll through the Balearic Island’s Old Town district and you will find La Torre del Canónigo, a charming boutique hotel with a reception area built around the city’s first defensive wall. The structure was imposed by Phillip II of Spain to guard the citadel from marine attacks orchestrated by pirates and Ottoman raiders in the 16th century.

Then there is Pikes. Originally a 15th-century stone mansion-turned-derelict farmhouse, the venue was transformed into an infamous party hotel in 1978 by UK-born Australian Anthony Pike. A haven for celebrities and rock stars – it once hosted Freddie Mercury and Wham!’s George Michael at their respective peaks – the 25-room property is nestled in the hills above San Antonio. In 1983, it was immortalised by Simon Napier-Bell, manager of Wham!, who shot the duo’s ‘Club Tropicana’ on-site.

More stylish hideout than den of iniquity, The Hacienda Na Xamena was also a landmark property. A Bond villain-style lair located on Ibiza’s northwestern corner, The Hacienda was carved into a cliff by architect Daniel Lipszyc to give inhabitants uninterrupted views of Ibiza’s crustal blue sea. It first opened in 1971, bringing refined luxury to the island’s wealthy clientele, and paved the way for high-end luxury in Ibiza, becoming its first five-star offering in 1988. Just as Ibiza itself has changed, its hotels and hospitality ventures have adapted to meet changing times and fluid demographics. While younger crowds still flock to clubs such as Pacha and Amnesia, in recent years the hospitality model has adapted to suit a mature clientele with more refined tastes.

It’s a shift in temperature that Austrian-born Enrique Mandl has seen develop since he first set foot on Ibiza’s white sands 17 years ago to take up the general manager role of Ocean Drive hotel.

“Ibiza as an island is really changing,” Mandl says. “In the last few years, a laid-back luxury feeling has been growing [as an alternative] to this kind of old-fashioned rave element. Partying is still an important part of the island and its culture, but clients are getting older and lots of parents now come here with their families.”

Formerly at Nobu Hotel Ibiza Bay, the five-star hotel on Talamanca beach, Mandl is now COO and general manager of OKU Ibiza, a flagship hotel near the island’s traditional rave spot of San Antonio – where many of its most popular beaches reside. With its name derived from a Japanese concept meaning ‘inner space’, OKU takes the Japanese philosophy of wabi-sabi – not to be confused with wasabi – and uses it as a reference point for a kind of ‘laid-back luxury’ that incorporates relaxed fun and wellness offerings into a 184-room hotel located on the fringe of Cala Gració bay, in the hills away from the chaos of the strip.

The property alone marks a significant investment, housing a signature suite, a standalone four-bedroom villa, ocean-view penthouses, two restaurants, a spa and an Olympic-size swimming pool. Cuisine comes by way of Mark Vaessen, formerly of SUSHISAMBA, who has brought his trademark fusion of Asian and Mediterranean dishes to the menu. Formerly a Casa Cook – the sub-brand launched in 2016 as an attempt to update the package holiday for a new generation – the hotel is backed by Swiss group LMEY Investments, which is also launching a 100-room hotel in Kos under the OKU name. As such, OKU is not just a new addition to Ibiza, but it marks the launch of a lifestyle brand with plans to expand across Europe.

“There are certain elements of Casa Cook, but it’s a totally new rebranding, so everything will be bought to another level,” Mandl explains. “We are a five-star grand luxury hotel, which makes us one of only three [such] hotels on the island, so I think we really went from a four-star concept to a five-star one.”

Get with the times

The venture is well-suited to a younger clean-living demographic or large family groups – it prides itself on “offering an alternative way to experience the famed party island of the Balearics” – but it is also selling itself more generally as an inner sanctuary from pandemic-induced anxieties. By encouraging a slower pace of life, guests will be able to take time out to switch off. Or so the thinking goes.

“Those people that are coming to us after being in lockdown for long periods have been desperately waiting for their first vacation, and what we’re trying to offer them is that relaxation element,” Mandl says. “It’s about having time to yourself. Of course, we’re respecting all the safety and distancing measures and all the necessary [protocols], but it’s really about getting that connection again after being at home for such a long time.”

As Mandl is only too happy to admit, there have been some challenging times. Starting an entirely new hospitality concept is difficult at the best of times, let alone during a global pandemic. “The biggest challenge has been getting the word out and translating that to our clients,” he says. “It’s never easy starting a hotel concept from scratch.”

There’s also the tricky balancing act of ensuring guests feel safe and secure, but also relaxed. Too many protocols and vacationers are likely to become irritated. Too few and they may feel unsafe, even if social distancing is easier to do when you’re paddling in the largest pool in Ibiza.

If Covid-19 has rewritten the rules of hospitality – ushering in contactless check-in and sanitising stations – then economic mobility has brought a new kind of guest to the higher end of the hospitality space. It’s a shift that Mandl has seen develop throughout his career, particularly in the past decade.

“When I started in the luxury hotel business, people going to five-star hotels were totally different. Today guests wear shorts or a T-shirt, even though it does cost £2,000 because it’s a Louis Vuitton. The luxury feeling in the hotels is harder to see. It’s all much more laid-back. The clientele is much younger. I think that a lot of people are saving their money so they can have these one-off experiences.”

Stylish design principles and a well-thought-out marketing strategy are not enough to thrive in today’s luxury segment alone, particularly when launching a brand in an island that is rapidly diversifying its hotel portfolio. Developing a personalised line of service well attuned to the preferences of each individual client is now a key point of difference in Ibiza and beyond.

“It’s about surprising clients with exceptional service. You can’t define luxury by hotel design anymore. You can’t define it by hotel brands. It’s really about the kind of experience that you give to your clients,” Mandl says. “Back when I started in the hospitality industry, clients travelling in the luxury segment had a clear vision of what luxury is; today you have lots of different perspectives.”

He references London’s Savoy hotel as an example. Not only are OKU Ibiza and London’s iconic hotel geographically worlds apart but their offering is too. The Savoy, he says, is a good example of a hospitality venture that plays on well-established traditional UK heritage, rather than delivering the kind of laid-back luxury that he hopes will make OKU successful in the long term. While it’s still early days, Mandl maintains that OKU will not rest on its laurels. Instead, it has its sights fixed on future expansion, with a focus on destinations inspired by nature and local connections – some early success in the Mediterranean could eventually birth a brand with global reach.

With Ibiza in mind, the launch of the OKU concept feels like another notable addition to an ever-diversifying hospitality portfolio that continues to alter with time and place. A brand selling itself as a refined and tranquil haven on an island famed for hedonism and excess? Stranger things have happened on the White Isle.

Number of rooms in OKU Ibiza. 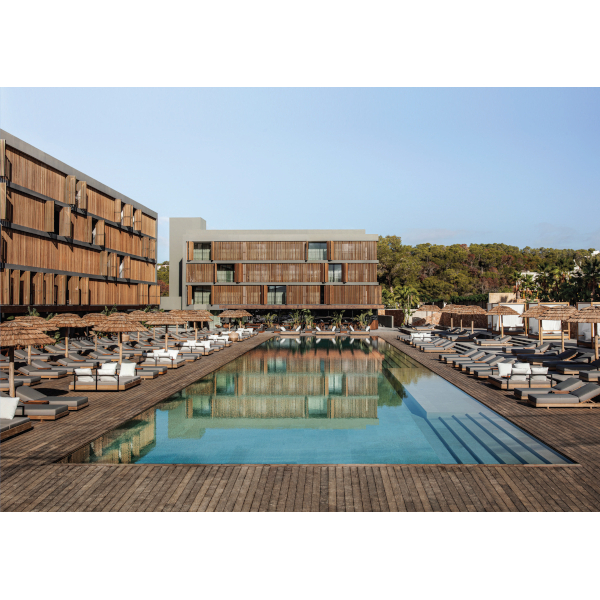 The new hotel’s swimming pool is part of an ambitious attempt to attract a less party-driven audience. 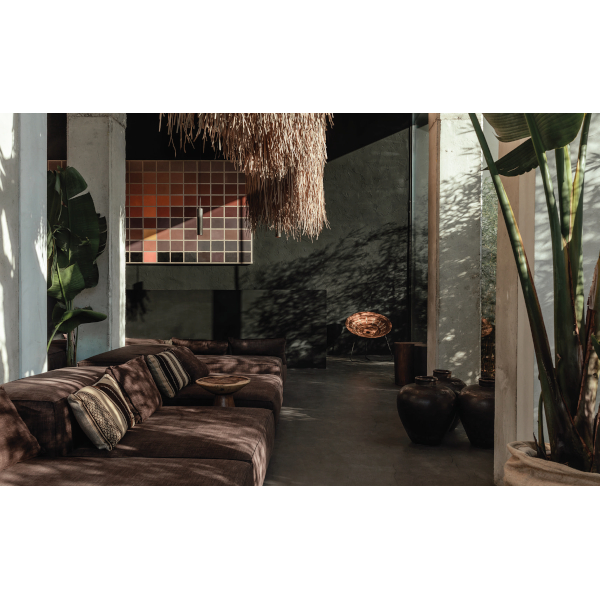 Interior shot of OKU Ibiza, one of only three five-star hotels on the island. 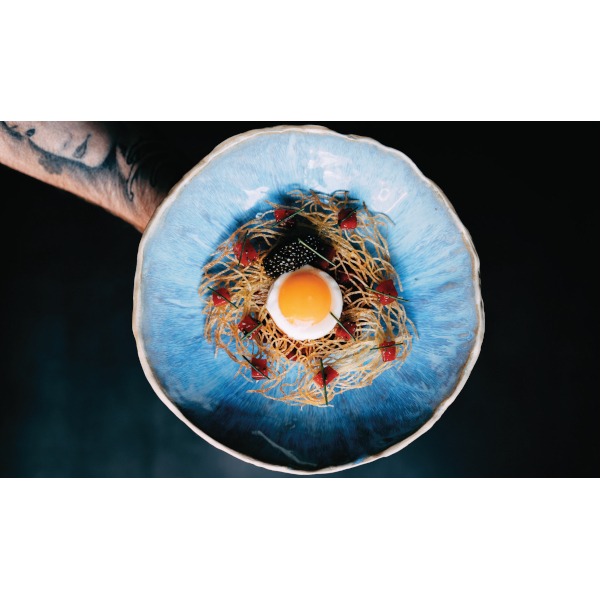