In the face of adversity

Despite ongoing political and financial instability within the country at large, the numbers for the Italian hotel market continue to look relatively healthy. However, with transaction volumes down this year compared with 2017 levels, how is the investor profile changing, where are they looking to get deals done and how attractive is the hospitality segment compared to other real-estate opportunities? With the help of Colliers International, Hotel Management International takes stock.

In conjunction with the higher volumes invested in Italy, interest in the hotel sector outperformed and outgrew all other investment segments between 2015 and 2017 accounting for 13% of the real-estate market, mainly for two reasons. On the one hand, given the scenario of high liquidity and lack of ‘traditional’ products, investors were seeking new products to acquire. On the other, the Italian tourism sector’s strong performance highlighted the lack of an adequate supply of hotels able to meet the new requirements of tourists

During the first nine months of 2018, however, investments in hotels declined to a greater extent than the overall decrease in the Italian market; consequently, only €346 million in transactions was recorded, equal to 8% of the market.

Of the 21 hotel transactions recorded, three stood out in particular. The largest transaction regarded the sale of the future hotel, La Lama, in the EUR zone – a residential and business district in Rome, located south of the city centre – in shell and core condition. In fact, the real-estate market in the EUR is undergoing a positive phase in terms of real-estate investment, as well as the letting of office spaces. One should make mention of the sale of Castello di Casole in the province of Siena, purchased by a foreign luxury operator. In Milan, Swiss Life AM Real Estate acquired a portfolio of two Italian hotels from BNP Paribas REIM, the 250- room Radisson Blu Hotel Milan and the 208-room Novotel Milan Malpensa, representing the company’s first South European hotel acquisitions.

Looking at the geographical distribution of hotel investments, the country’s capital maintains its position at the top of the table, achieving approximately €130 million – equal to 39% of volume. Conversely, activity in the other cities is at lower levels.

Investors are taking into existing hotels into consideration, partly to refurbish, as well as properties to be converted, particularly in historic centres. The nonperforming trend in the office market outside of Milan is driving investors to seek alternatives for these buildings. If they are not positioned on the major shopping streets, their conversion into residential or hotel use can be evaluated. In the first case, the strategy would involve a split sale, which is not in line with the investor mindset. In fact, the residential leasehold market managed by institutional investors has not yet developed. However, the second case would maintain an investor logic with a long-term time horizon, given the duration of hotel rents.

Tourism flows have recorded interesting percent variations over the last few years, with an increase in total arrivals of about 19% between 2013 and 2017, and a 12% increase in overnight stays. This trend in flows led to a decline in the average stay: the 2013 figure amounted to 3.6 overnight stays, while in 2017 it dropped to 3.4 nights. Also of interest is the analysis of source of the flows. The international component played the greatest role in supporting this increase in flows: the number of stays by Italian tourists increased by 9% between 2013–17, compared to an increase of approximately 14% for international ones.

The gap between domestic and international tourism is present with regard to arrivals, although it is not as evident (17 and 20%, respectively).

In fact, investment volume achieved the best ever result, equalling €1.6 billion – a 7% increase compared to the same period of 2017. Consequently, the annual total volume reached €4.6 billion. As a result, the year’s trend is still lower than the record levels of 2017, albeit in line with the 2013–16 average.

The real-estate market remains active, although the lack of product is pushing investors to rate other asset classes, such as retail, logistics and healthcare.

Indeed, investments in offices have halved, as have those in the hotel sector. In both cases, the lack of product is truly felt. The operators’ interest in hotels remains high, though the timing is rather long due to the value-added operations that need to be carried out.

Interest in logistics and retail confirms that investors are confident in the Italian families’ consumption trend.

Positive results in the healthcare sector show a will to diversify in other asset classes over a longer time span, ideal for pension funds that are interested more in cash flows and less in capital gains.

The two main markets of Rome and Milan totalled 57% of the investment volumes. The Milanese market succeeded in attracting €664 million investments in the third quarter, reaching a total of €1.8 billion since the beginning of the year. These results are lower than the record volumes of the past three years. If compared to other Italian areas, the city remains attractive but the products sought by investors are hard to find. Indeed, the available properties are limited, which reduces the transactions volume. However, competition to secure the best core products keeps yields at very low levels, even during a rise of the government bonds rates. This reveals that investors are still trusting in the Italian market.

Offices continue to be the preferred asset class, thanks to the excellent performance of the rental market, which could reach a take-up record level at the end of the year. The market trend of the capital is in line with what has been observed over the last five quarters, with quarterly volumes approaching €300 million. Unlike Milan, where the market is mainly linked to offices, investors in Rome contemplate all the other asset classes. The most important transaction concerned a healthcare portfolio, whereas it’s worth mentioning retail transactions in the area of Via del Corso with very high values in terms of price per square metre. 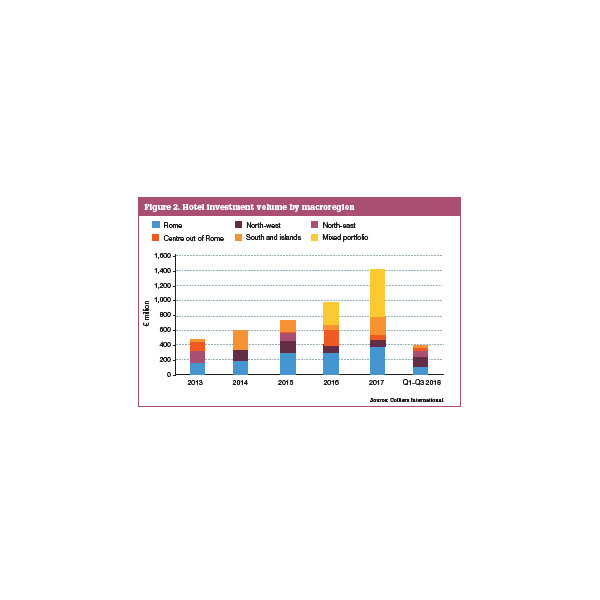 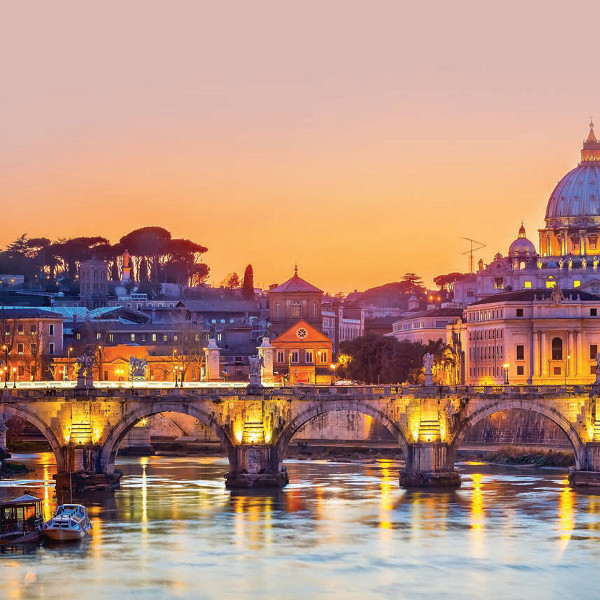 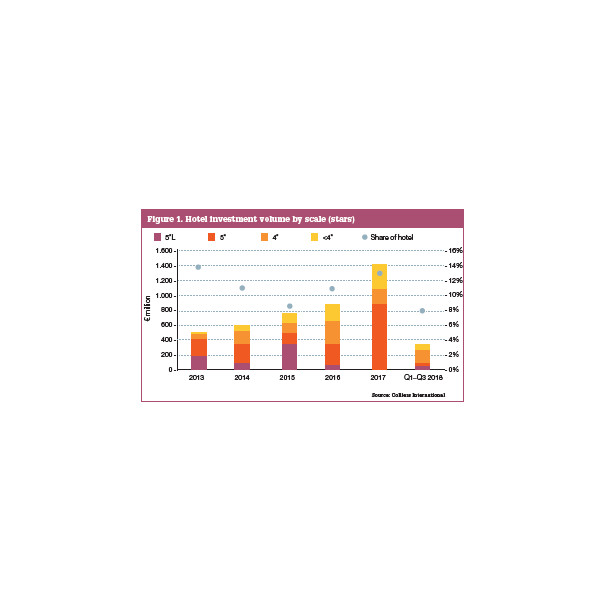 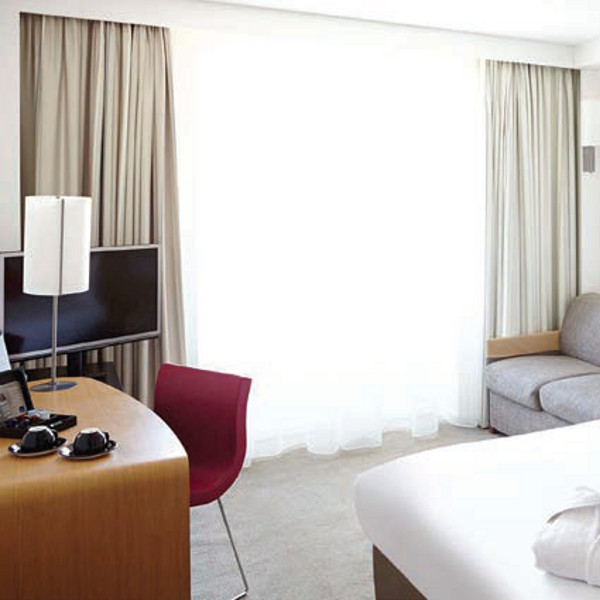 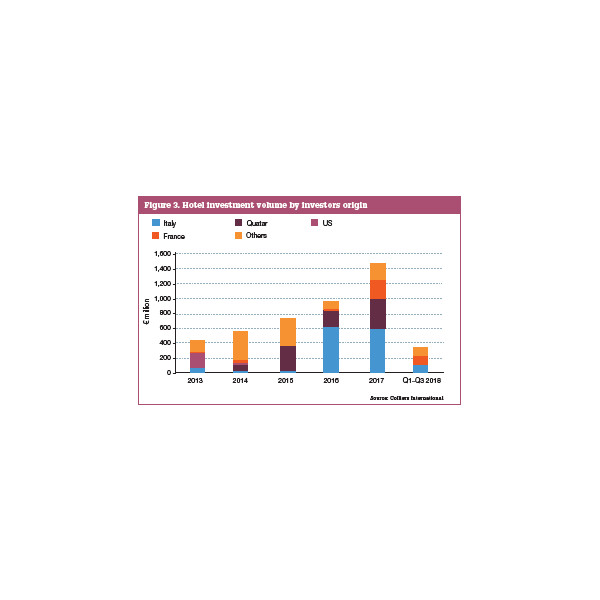 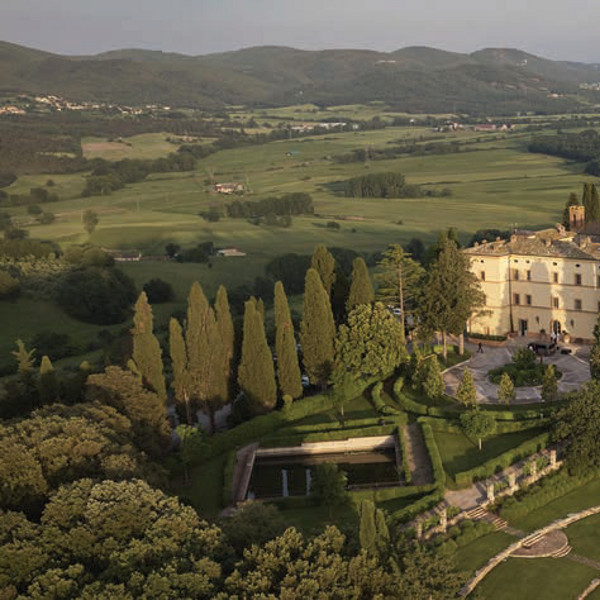 Castello di Casole, Siena: this hotel was recently purchased by a foreign luxury operator.
Post to: