As only the third CEO in the company’s history, and the first non-family member to hold the role, Marriott International’s Arne Sorenson has big shoes to fill and an exacting predecessor to impress. He talks to Phin Foster about leading the US’s largest publicly listed hotel group, growth strategies in new markets and building on Bill Marriott’s legacy.

As legacy narratives go, the opening of a root beer stand does not sound like the most auspicious of prologues. It was 1927, and J Willard and Alice, not yet out of their 20s, were looking to start a life in Washington DC. One imagines that dynasty building sat low on their list of priorities.

Over the next three decades, however, despite the Great Depression and a world war, J Willard grew that stand into a publically listed restaurant and food services company large enough to be taken public in 1953. He wasn't finished there. Four years later, 30 years after that first root beer stand, he made his move into the industry that would establish John Willard Marriott's - and the family's - name.

The tale of a family

The Twin Bridges Motor Hotel in Arlington, Virginia offered little indication of the success that was to follow. Half a century later, Marriott International consists of more than 3,700 properties in 74 countries, employing approximately 300,000 people and generating annual revenues of over $12 billion. This is not just the story of a hotel group; it is the tale of a family. When J Willard was looking for a successor, he did not have to look too far. His son, John Willard Jr, had been with the organisation since the mid-1950s.

"The strategy is to take care of our associates so that they can take care of the guest. This is a people business."

Appointed CEO in 1972, 'Bill' would go on to establish Marriott International as the world's second largest hotel operator, becoming the very public face of the US's largest publically listed hotel operator. First father, then son, from nine-stool root beer stand to global hotel empire, for 85 years there had been a Marriott running the show. But, with Bill marking his 80th birthday, the dynasty needed to anoint an heir.

Once again, the man for the job was already standing in close proximity. On 31 March 2012, six days after Bill's 80th birthday, Arne Sorenson was installed as his successor. Having served in an array of roles over his 16 years with the company, including senior VP of business development, CFO, president of Continental European lodging and, most recently, COO, Sorenson was family in all but birth certificate. "I personally recruited Arne to Marriott in 1996," said Bill Marriott upon announcing his successor. "There is no-one more deserving or capable of assuming the role. Arne knows the business, lives our core values and has the respect and admiration of all of the company's major stakeholders." This admiration is clearly mutual.

"I am honoured to be that person and I take the responsibility extremely seriously," says Sorenson, when asked about the pressures of being the first non-family member to lead the company. "Like so many others, I admire Bill a great deal and like to think we have a lot in common. He is a decider, and treats people with respect. These are qualities I try to emulate."

Nine months into the role and it seems as though the succession process could not have been smoother. Marriott International significantly beat its Q3 forecasts, with net income up 40% on the same period in 2011. Sorenson's ascension has coincided with a genuine pick-up in the market.

"All brands are doing well," he reflects. "We're encouraged by the strengthening group business at our convention and resort hotels. Banquet revenue increased 6% in the third quarter and our stock has performed very well this year. We completed the spin-off of our timeshare business in late 2011 and believe our concentrated focus on lodging, combined with a much higher return on invested capital and improving revPAR, has significantly helped our valuation."

Despite heavy focus on international expansion, North America continues to account for 75% of annual fee revenue. Defeated presidential candidate Mitt Romney has recently rejoined the board of directors, following a bruising campaign in which he warned of the disastrous impact another Obama term would have on what is already a slow economic recovery in the US. Sorenson forecasts a 'steady as she goes' scenario rather than a dramatic pick-up in fortunes, but green shoots are beginning to appear.

"Marriott International significantly beat its Q3 forecasts, with net income up 40% on the same period in 2011."

"Demand among business travellers and meeting planners has certainly increased," he acknowledges. "Group revPAR for the Marriott brand in North America increased 8% in Q3, with average daily rates up 3%. We are likely to return to 2007 peak revPAR levels some time in 2013.

"Annual GDP in 2012 is growing at a pace slightly north of 2%. Assuming that pace continues into 2013, our system-wide North American hotels will likely remain in the 5-7% revPAR growth range. The general consensus is that we'll see less than 1% supply growth in 2013. That, combined with nearly peak occupancy levels, positions us to drive room rates higher. With a strong book of group business and a sales organisation that is doing an outstanding job booking new business, our revenue management team is leveraging that success to drive rate." With revPAR and rates rising in most regions of the world, the overall message is one of cautious, rather than bullish, optimism. Sorenson admits that 2013 forecasts are dependent upon "a successful resolution of the fiscal cliff in the US and modest improvement in the European economy" - both far from being nailed-on certainties. Like any other business leader with exposure on the continent - Europe accounts for 9% of fee revenue - he is following developments within the eurozone closely.

"In the year to date, our European hotels have reported a 3% growth in revPAR," Sorenson reveals. "Results were certainly helped by the Olympics and European Football Championships in the summer and, with so many of our hotels located in gateway cities, approximately one third of European demand comes from outside the continent.

"Over the year ahead, the big story will likely continue to be the economy. We also face tough comparisons to the 2012 special events and, given all this, expect flattish constant dollar revPAR performance across our European hotels."

So, with North American growth modest and Europe flat at best, where might one find the real engine for expansion? Launched in 2010, Marriott's Autograph Collection of luxury hotels was "the fastest full-service brand launch in history". Non-standardised, independent and requiring very little capital expenditure, it has obvious appeal.

However, a select portfolio alone is not going to deliver the numbers Sorenson is chasing; like every other business leader in the international hospitality sector, he is looking East. Marriott recently reached the milestone figure of 250 hotels in Asia - 129 open and 121 pipeline properties. It plans to have 260 in operation by 2016.

"Marriott International has set a target of 100 Indian hotels by 2015."

"Asia continues to deliver robust growth," says Sorenson. "Our prominence in China's major gateways brings high exposure and brand credibility. But we are expanding into secondary and tertiary markets as well; as government policy pushed development westward, those cities now have the potential for strong room rates."

Sorenson hopes to double Marriott's number of Chinese hotels in operation, currently standing at 58, over "the next three to four years". It will also need to double its workforce in the country to well over 70,000. And it is not just in China where Marriott will be recruiting. Marriott International has set a target of 100 Indian hotels by 2015. In Africa, Sorenson hopes to increase its presence sixfold by 2020. Brazil is playing host to the launch of a Fairfield green hotel prototype, with 50 such hotels opening over the next decade. Marriott is not the only hotel operator targeting expansion in fast-growing economies and the war for talent can be fierce.

"We are definitely in pursuit of the best people worldwide," the CEO declares. "In Asia, retention can be a challenge because there is so much activity at the moment. However, I think our culture of putting people first and providing opportunities for advancement has served us well. In many markets - such as Kigali, Rwanda, where we've partnered with a local school - we are actually helping to train supervisors in hospitality management. The hope is that they'll eventually open the hotel and recruit and train teams from the local community."

Local knowledge is critical and Marriott has established a continental structure in order to have more feet on the ground in foreign markets. Sorenson acknowledges the need to be visible across an increasingly global portfolio. "I'm a big believer in managing by walking around," he says. "There's been a fair amount of travel."

His predecessor was well known for having a similar attitude and it is clear that Sorenson is fully committed to building upon his legacy in more ways than one. Bill remains executive chairman and chairman of the board, but one gets the impression that he will not need to remind his CEO of Marriott's longstanding philosophies or principles.

"The role is very geared towards our growth strategy and transforming the company to be globally focused," Sorenson explains, "but first and foremost my responsibility lies with our people. The strategy here has always been to take care of our associates so that they can take care of the guest. This is a people business and will always remain so." There might not be much else that a young J Willard and Alice would recognise in this 2012 incarnation of their business, but both would surely be glad to hear that some core values remain undimmed. 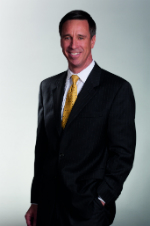 Marriott International’s Arne Sorenson.
The Boscolo Budapest in Hungary is one of Marriott’s Autograph Collection of independent five-star hotels.
An executive suite in the JW Marriott Hotel Dubai, one of the emirate’s top luxury hotels.
The AC Santo Mauro in Madrid, Spain is also part of the Autograph Collection.
Post to: