The pipeline is bursting, and investor, developer and operator interest in the German hotel market is higher than it’s been in years. Elly Earls meets industry insiders to find out where opportunities still lie, who’s making the most of them and how long the good times are likely to last.

Germany leads the continent in terms of hotel rooms under construction, with 2018 marking its eighth consecutive year of growth. And while this year’s numbers haven’t been confirmed yet, Christie & Co estimates that the pipeline will remain full – around 50,000 rooms in planning and under construction in Germany’s eight largest cities. Meanwhile, investor, developer and operator interest in the country is the highest that’s been seen in recent years. Global brands are certainly ramping up their expansion in Germany. Best Western, which has the greatest presence in terms of number of brands in the country – 16 brands across 200 hotels – has opened on average 10–15 hotels every year over the past few years, with plans to edge this up to 20 in 2019.

IHG has also made Germany a priority market with 132 hotels already open or in the development pipeline. It plans to bring 15 avid hotels – its newest midscale brand – to the German market in the next five years, double its Hotel Indigo footprint by 2020 with three new openings and bring its first Kimpton Hotel to Germany in 2023, with the opening of the 155-room Kimpton Frankfurt

Marriott, too, has big plans for Germany, led by its economy lifestyle brand Moxy. It intends to more than double that portfolio in the next three years, a strategy driven by a combination of internal and external factors.

“Germany is a very diversified market – you have a lot of large cities, a lot of large sub-centres, which are very strong markets with their own dynamics internally. That makes for a very rich and deep hotel and lodging market,” says Marriott’s regional vicepresident of development for Europe, Markus Lehnert.

“The economic situation in Germany is also very healthy, and the economy and lifestyle sectors are fairly recent additions in the German hotel market, which means there is great potential.”

It is also a market with a strong hospitality legacy and a large number of independent properties ripe for conversion. This has been spotted by all ambitious international players, who have long been in competition both with one another and strong domestic operators such as Deutsche. Developing a nuanced cultural understanding of the market and its participants is a must, but embedding oneself in the country is a long-term process.

“In terms of internal drivers, we have spent the past 15 or so years establishing a solid and dependable network of franchise partners – we have the first of these reaching more than 20 hotels with us, which for Europe is certainly a big number,” says Lehnert. “Therefore, we now have much deeper market penetration into secondary and tertiary cities, and we have the brands to go into these markets.”

On the Moxy front, Marriott already has good coverage in Hamburg and Frankfurt, and wants to expand its footprint in Berlin and Munich. But Lehnert isn’t ruling out more openings in markets where the brand is already strong.

“We find that when you go into these markets, new opportunities arise that may be locally driven,” he explains. “I wouldn’t be surprised if we had another four or five hotels in the area of Frankfurt [which already has six Moxy hotels] because people see that the existing ones work and are accepted by the customers in the market.

“There is also a drive towards not just occupying a great city centre location but also meandering out into the airports and suburbs. And with investment costs being significantly lower than many other hotel brands, it makes economic sense to look at even tertiary markets.”

Marriott is also on the lookout for conversion opportunities – both existing hotels and adaptive reuse of other buildings. Two brands the operator wants to focus on in this area are Four Points by Sheraton and Delta. “With hard brands a conversion can be very costly,” Lehnert says. “But [these brands] have greater flexibility in terms of the product appearance. There are a lot of four-star or full-service hotels in the German market that are looking for a home.”

In addition, he believes the extended stay market is ripe for the entry of global operators. “There are many people who work Monday through Friday in one city and drive home to another one at the weekend so there is demand for extended stay,” he says.

In December 2018, Cycas Hospitality, one of the leading extended-stay operators in Europe, signed its first deal in Germany – with Marriott – on the 133-suite Element Frankfurt Airport. By 2022 Cycas hopes to have 4,000 guest rooms in Germany.

“The extended stay product is still very much under-represented, but is becoming much more popular,” says Christie & Co senior consultant Patrik Hug. “The margins are relatively high and, at the same time, the quality is relatively good.”

Marcus Smola is CEO of Best Western Hotels Central Europe. He sees tremendous potential to grow both in markets where Best Western already has strong representation – such as Munich, Frankfurt and Berlin – and the many white spots that remain.

“Germany is a very diversified market – you have a lot of large cities, a lot of large subcentres, which are very strong markets with their own dynamics internally.”
Markus Lehnert, Marriott International

This is largely because of the group’s diversification into soft brands, which include the BW Premier Collection, the BW Signature Collection and Sure Hotel Collection by Best Western, over the past three years.

“In the European market, roughly 70–75% of hotels are not branded,” he explains. “Now we have the option to target all these hotels that don’t want to get branded but do want to become a member of a global group and benefit from everything that brings.”

80%
Of property deals in 2018 were individual transactions.
Engel & Völkers

Sure Hotel Collection was launched in Germany in January with four hotels: the Amedia Plaza in Schwerin, the Plaza Hotel Blankenburg in Ditzingen, the Amedia Hotel in Weiden and the Altstadthotel Arte in Fulda. Meanwhile, the recent acquisition of WorldHotels, which has 10% of its 300-strong portfolio in Germany, gives Best Western the scope to expand into the luxury end of the market – with full and soft brands – too.

How long will it last?

With the market fundamentals still positive and investor interest stronger than it’s been for years, Lukas Hochedlinger, managing director for central and northern Europe at Christie & Co, is keen to stress that we haven’t reached the top of the cycle yet. “Here and there, we’re seeing that the key players in some of the markets are starting to look a little bit deeper behind the curtain to really understand the fundamentals of each and every project or investment opportunity,” he says.

Another big challenge presented by the German market, adds Hug, is that it mainly operates on a lease model. “Investors have to put down a cash guarantee of six to 12 months; it’s standard. But many international hotel brands don’t want to franchise; they prefer to manage.” It’s a hurdle Marriott has managed to overcome by growing a rich network of franchisees who are prepared to take a lease and then go back to Marriott and take a franchise. “But obviously, we are at a disadvantage there because some companies operating solely in the German market or predominantly in Europe are used to lease and they have a strong positioning in a competitive environment,” Lehnert admits.

On the other hand, companies like Marriott and Best Western have an advantage against local players because of their wide range of brands, and the systems and security they offer.

“Increasingly you have people saying we’re having a good ride at the moment, but how long will it last?” Lehnert says. “I think prudent people give us great consideration because our systems suggest a certain safety in times of economic misfortune.”

For Hochedlinger, some of the challenges of operating in the German market are no different to those in many other countries – rising prices, growing competition, tight margins, as well as labour shortages.

Moreover, even if the market does cool off a bit, which he says will happen at some point and might even be a relief, it will improve again.

“In Germany, there are so many small and medium-sized companies, the economy is strong and there is strong domestic tourism,” he concludes. “Economy-wise, business wise, business tourism and leisure as well, the fundamentals are so strong.” 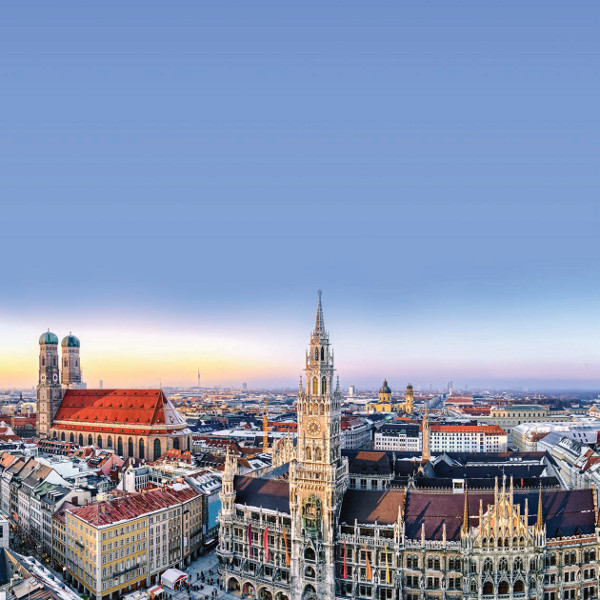 A panorama of Munich city centre in Germany. 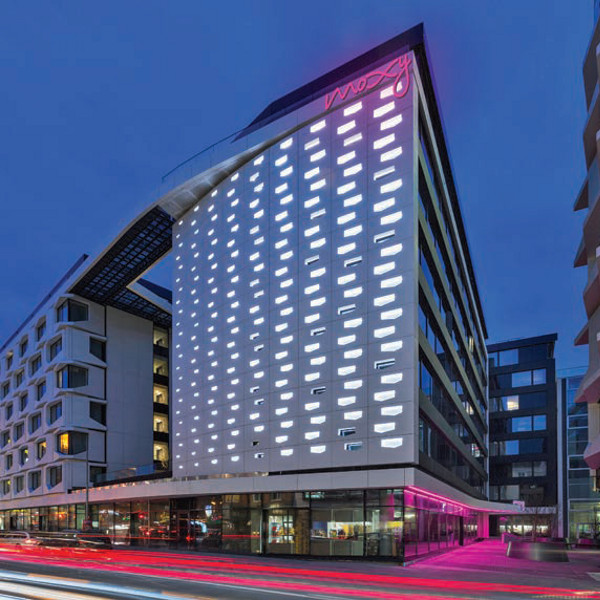 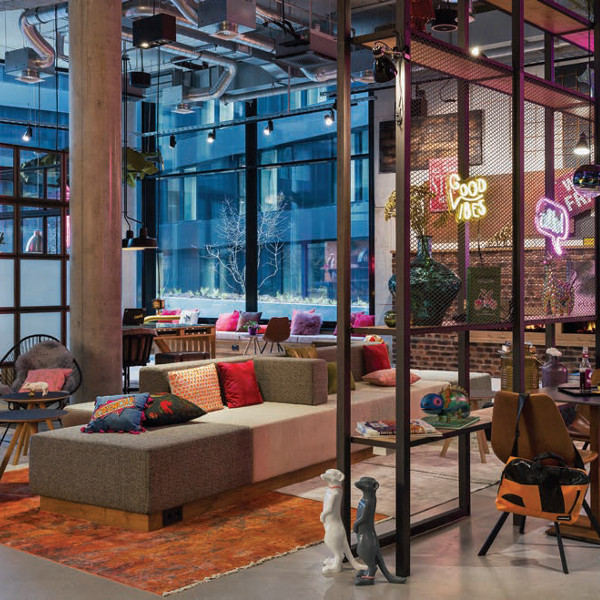 The interior lobby area of Hotel Moxy Frankfurt East, located in the heart of the city centre.
Post to: