Multi-Michelin-starred chef, honorary Italian and dedicated oenophile. On the back of confirming his place on the judging panel for our European Hospitality Awards 2012, Heinz Beck talks to Ross Davies about his personal food philosophy, aversion to celebrity chef status and the balancing act of running restaurants in London and Rome.

Heinz Beck's ambition wasn't always to become a multi-Michelin-starred chef. In fact, his first steps into the culinary world came about as an indirect consequence of good old-fashioned teenage rebellion.

"When I was 15, I actually wanted to go to art school and become a painter," he says. "But my father wanted me to go and study a proper subject like economics or medicine, which I refused to do. I then decided to become a chef, which he also disagreed with, but I had already made up my mind."

Beck, confirmed as a judge at Hotel Management International's European Hospitality Awards 2012 - alongside such names as Ted Teng, Harry Handelsman and Claus Sendlinger - is reminiscing in his beloved La Pergola restaurant at the Hotel Rome Cavalieri, where he has reigned as head chef for the past 18 years. Given his eminence as one of Europe's foremost gastronomic talents, it's certainly difficult to imagine how his career could have taken any other path.

This anecdote is also a fitting illustration of the kind of existentialist spirit that has guided Beck's ascendency to date, and which today sees him divide his time between La Pergola and his London restaurant Aspleys, a Heinz Beck Restaurant at The Lanesborough Hotel, which opened in 2009.

"My life is split between Italy and the UK," says Beck. "I usually spend the Sunday, Monday and Tuesday morning in London, before flying back to Rome at lunchtime and getting back to La Pergola in the evening. I also have a smaller restaurant in Pescara, which I visit often. I travel a lot, but I enjoy it."

This commitment to both ventures has paid off handsomely. La Pergola has long been renowned as one of the most prominent restaurants in Italy, while Aspleys was open for business for a mere five months before it was awarded its first Michelin star.

The latter continues to go from strength to strength, particularly on the back of Beck's recent decision to install long-time protégé - and former number two at La Pergola - Heros de Agostinis as executive chef. "Since Heros' appointment, we have had only positive feedback," says Beck.

"People are saying that things are even better than before, which we are very happy about. When I made the appointment, given my long-standing relationship with Heros - we have worked together for over 16 years - I was absolutely sure that it would not risk the restaurant in any way."

Beck's role as a mentor to de Agostinis is also indicative of a dedication to getting the very best out of his staff, underscored by an omnipresent and hands-on approach in the kitchen.

"I do think of them like they are my children," he says. "I train them and follow what they do in order to make them better chefs, just as I did when I was starting out. This is my job - to be in the kitchen with them explaining, controlling, tasting, changing and doing."

Having cut his own gastronomic teeth in his native Germany, which included a spell as sous chef under the auspices of the legendary Heinz Winkler, Beck took up residency at La Pergola in 1994. While, as a German chef, one would assume that ingratiating himself into a fiercely proud national culinary scene such as Italy's would represent a daunting undertaking, for Beck it was simply a case of getting to grips with the vernacular.

"I liked the place immediately," he says. "And believe it or not, the food wasn't actually the hard bit. Instead, the greatest challenge came in learning a new culture and language. So I came originally with a view to stay for two to three years - and here I am 18 years later."

By his own admission, Beck today considers himself to be something of a naturalised Italian - his voice now carries little trace of his Teutonic roots, having appropriated the cadence synonymous with his adopted country. He also has a Sicilian wife and cooks almost exclusively with local ingredients. Given his deep-rooted allegiance to Italy and life in Rome, how does London measure up?

"I think of my staff like they are my children. It is my job to be in the kitchen with them explaining, controlling, tasting, changing and doing."

"It's difficult to compare the two," he says. "Of course, London's dining scene is certainly more diverse, with more Michelin-starred restaurants and famous chefs like Heston Blumenthal and Alain Ducasse, but both cities give me so much. It's a fantastic mix."
And yet, in spite of Beck's deference for the likes of Blumenthal and Ducasse, he has shunned the opportunity to burnish his own celebrity credentials. While he has published a number of recipe books, mainly focused on Mediterranean cooking, it is highly unlikely that we will see him fronting his own television show any time soon.

"I have nothing against those who choose to become celebrity chefs," he says. "I have done some television shows in the past, but I have tried to avoid overexposure, mainly because I am a chef that likes to be in the kitchen cooking. That's my job and what I care about most."

A self-professed perfectionist, Beck is forever working on what he refers to as "the next dish". He is also a passionate oenophile - he claims to have more than 6,000 bottles of wine in his cellar at home - with much of the fare served at both La Pergola and Aspleys drawing on a knack for cooking with wine.

"Not long after I moved to Rome, I obtained my professional sommelier qualification," he says. "I really believe being able to cook with wine has played an integral part in my success as a chef. But it doesn't just apply to Italian cooking - all chefs can benefit from learning how to incorporate wine into their dishes."

Given that his restaurants are situated within two of Europe's most notable five-star hotels, Beck has understandably earned a reputation for running a tight ship. And in light of tough economic times, particularly in Italy, he believes that this meticulousness and attention to detail is inextricably tied to the customer loyalty that he continues to enjoy.

"I think it's important to remember that guest loyalty is always created before a crisis," he says. "So of course the current economic climate has posed problems, but all you can do is raise your standards and run the restaurant to the best of your ability. This goes for any establishment, irrespective of whether it is in a luxury hotel or not."

And with that, Beck informs me that our time is up. After all, he has a restaurant to run.

Entries are now open for the European Hospitality Awards 2012. The winners will be announced at a gala dinner held at a five-star London hotel on Friday 2 November. 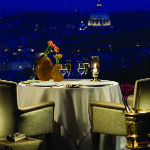 The intimate view from La Pergola. 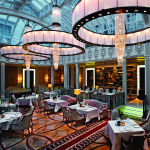 Aspleys was open for business for a mere five months before it was awarded its first Michelin star.
Post to: